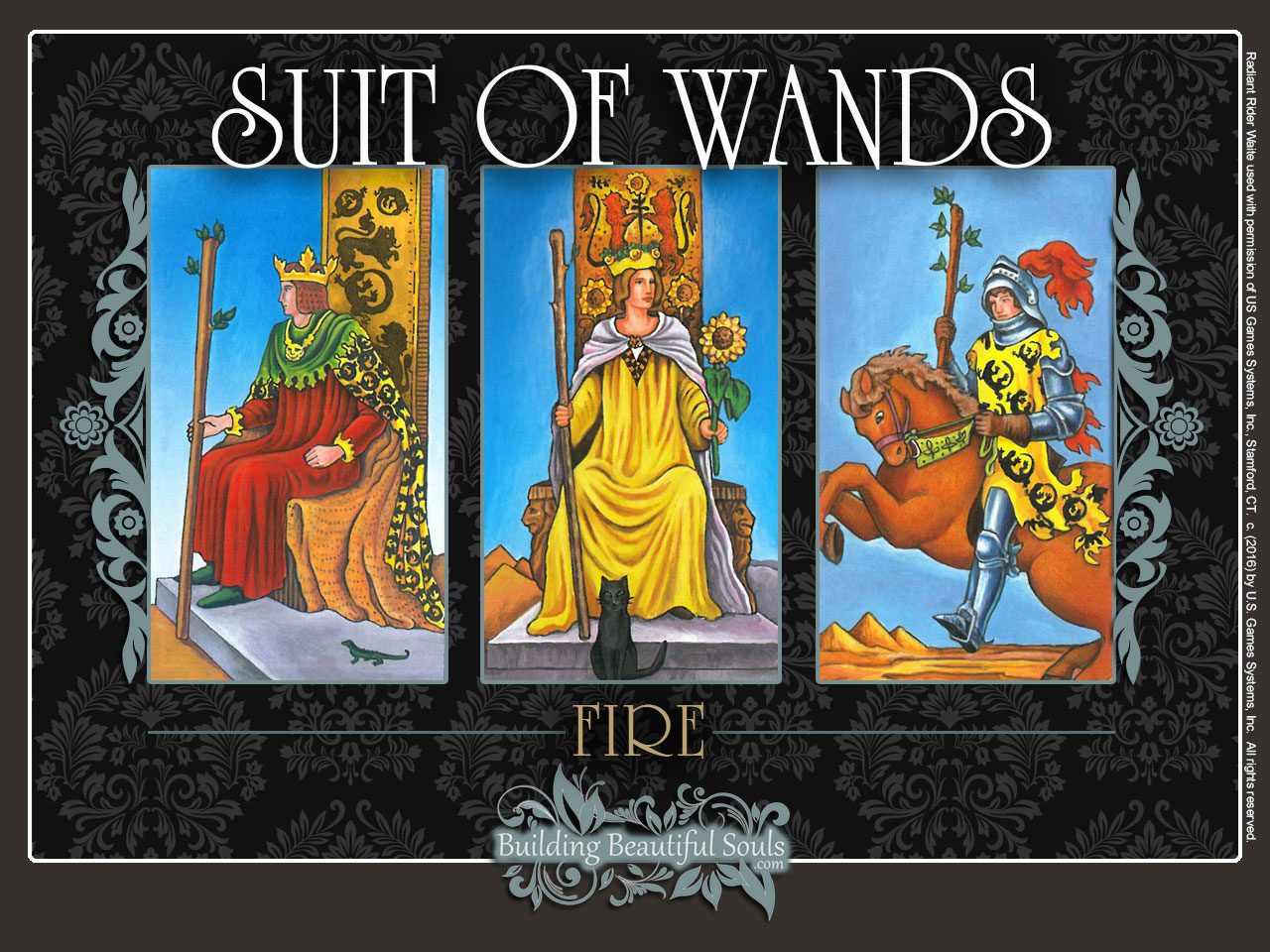 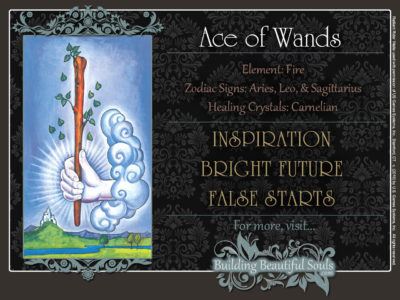 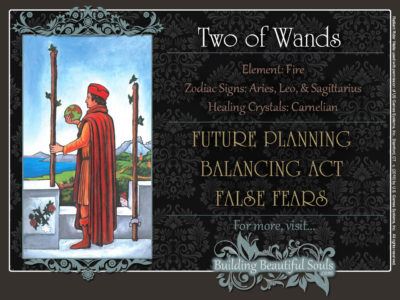 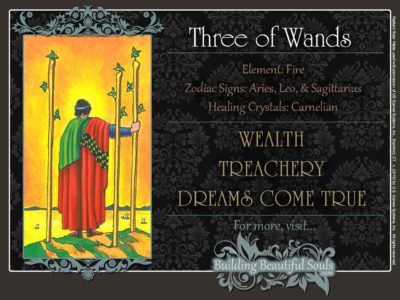 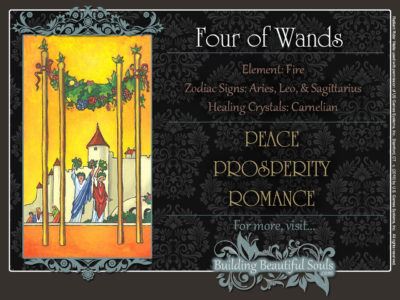 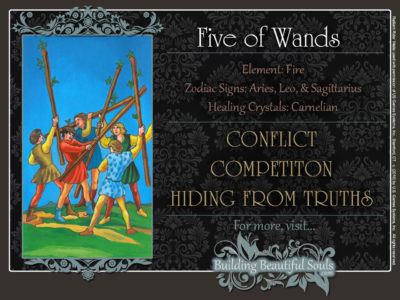 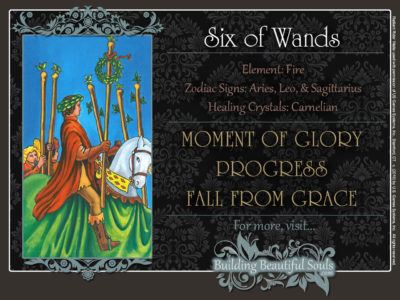 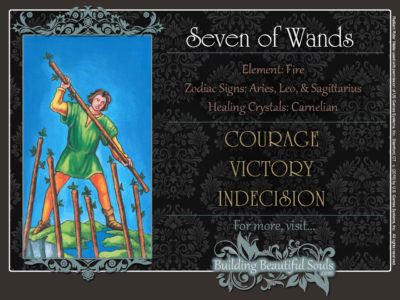 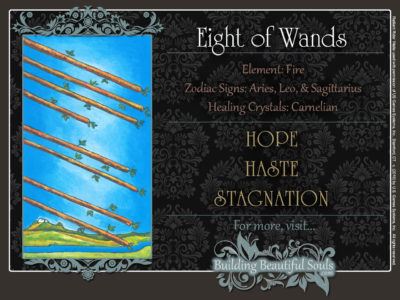 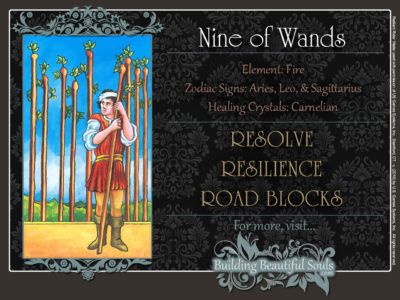 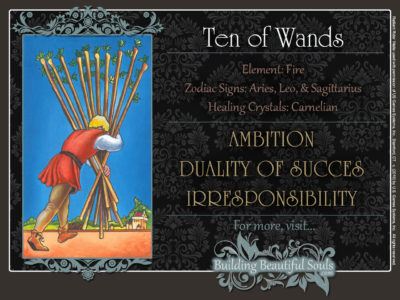 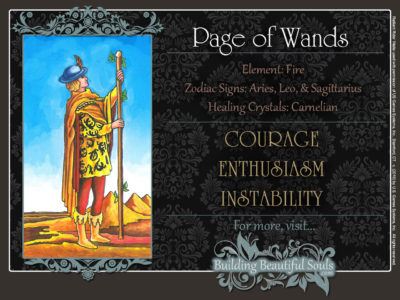 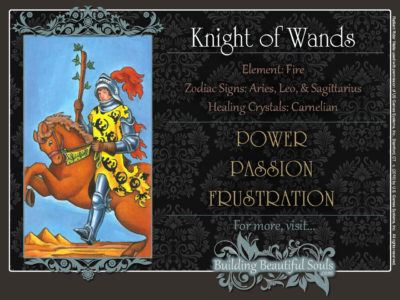 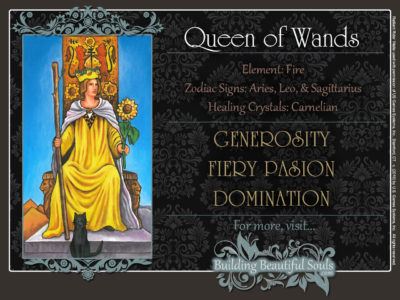 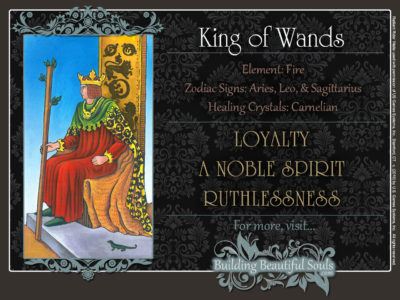 The Suit of Wands is about discovering just how much fun life can be, if you’re willing to get your duff off the couch and play outside!

Okay, looking through the cards, some of those games look a little rough and tumble. Will you get your pants torn and your knees scuffed every now and then?

But where’s the fun in playing it safe all the time?

Hey, it’s not like anyone’s going to end up in the hospital, or anything. Yes, there’ll be a few trips to Dr. Mom or Dr. Dad. But that’s what growing and learning is all about. You’ll make mistakes every once in a while, and you’ll get knocked off your feet.

However, in many respects, this is not only the most exciting, but also the safest suit in the Minor Arcana.

Because of the Wands’ rambunctious nature, it’s no coincidence that this suit corresponds to the Clubs in a deck of regular playing cards.

Like Mark Twain’s Huckleberry Finn, the energy of this suit is wild, innocent – and unexpectedly wise. Its major themes are determination, growth, learning, creativity, and inspiration.

The Suit of Wands are wild, free and full of life, just like most of the people holding them in this suit. These wands look like they’ve been cut fresh from the tree, and they’re completely untouched by any artisan’s hands. They haven’t been lathed, carved, sanded, or lacquered.

Heck, they haven’t even been stripped of their green leaves. Naturally perfect, they’re straight from the source.
That’s what inspiration is all about!

It’s an awesome idea straight from the universe that you can simply enjoy without having to worry about marketing plans, timelines, and budgets. Yes, you’ll have to do that once you get serious about putting it into action.

The journey through the Suit of Wands involves learning, growing, and asserting yourself.

Oh, and it’s also about having fun along the way.

The Suit of Wands is associated with the Element of Fire.

When you think of all the damage an out of control blaze can create, it seems to be more logical to assign it to the Suit of Swords.

But the key word is “control.”

The Element of Fire is linked to the Suit of Wands because Prometheus, a Titan from Greek mythology, held a torch to the sun in order to steal fire from the gods. It was his gift to humanity.

In the creation or manifestation process, Wands symbolize the first step. They’re the first spark, the first impulse when you’re about to start a project or pursue a major life goal.

How you make it happen is the job of the other Tarot Suits. But this is your dream and the Suit of Wands shows up to tell you that your soul is ready to begin its journey of achievement.

This dream is like the DNA that’s in every cell of your body. It has all the information required to make the rest of you. Unpacking it so this task can be accomplished – that’s the process of manifestation: your journey through the Tarot.

Every single Wand in each card of this suit is actually a miniature version of the Kabbalistic Tree of Life, a symbol of the whole universe.

Suit of Wands & The Zodiac Signs

The Fire Signs of the Zodiac – Leo, Sagittarius, and Aries – are a feisty bunch. They’ll give you the necessary oomph! to make your dreams come true. Leo’s willpower can move mountains. Sagittarius never misses his mark. And Aries will do whatever it takes to make it happen.

On the downside, these signs are also famous for their tempers. If un-evolved or awakened those born under these Western Zodiac Signs can be incredibly destructive – just like real Fire.

Suit of Wands in a Reading

Wands are associated with the Element of Fire. That’s pure energy and spirit.

In a reading, the mood or personality of Wand Cards is enthusiastic, hopeful, and confident! This is a very optimistic suit!

Wands appeal to your sense of adventure.

They make perfect walking sticks, and they’re eager to pull you out of your hermit cave – sometimes kicking and screaming. But unless you’re an incurable Oscar the Grouch, you’ll find out pretty fast how much playing in the mud can actually be.

Often, they’ll announce that you’re about to embark on a journey of discovery – metaphorically or literally – and they’ll keep you informed about how far you’ve come.

In a Tarot Reading, Wands often bring important information about your career and business ventures – or any competitive situation in general. Sometimes, seeing the Suit of Wands points to conflicts between people. However, the Wands are just as likely to show up in questions about love and courtship.

Yes, Wands can cover a huge territory. Keep in mind that an idea has to manifest itself in all four worlds of experience: the spiritual, intellectual, emotional, and physical.

Remember how the Magician in the Major Arcana holds his Wand above the symbols of all four suits of the Minor Arcana?

But there is a common thread that runs through these very different areas, and that’s the need to assert yourself.

People who are represented by the wands are generally warm and charismatic. They’re often very spiritual and intensely creative. Their energy is is electrifying!

Sometimes, it can be pretty hard to keep up with them.

The downside is that they’re often restless and tend to lose focus, unless someone holds their nose to the grindstone. They can lose themselves in daydreams, and their impulsivness can land them in a lot of trouble, if they’re not careful.

When they’re angry, their temper is the stuff of legend.

One thought on “Suit of Wands Tarot Card Meanings”