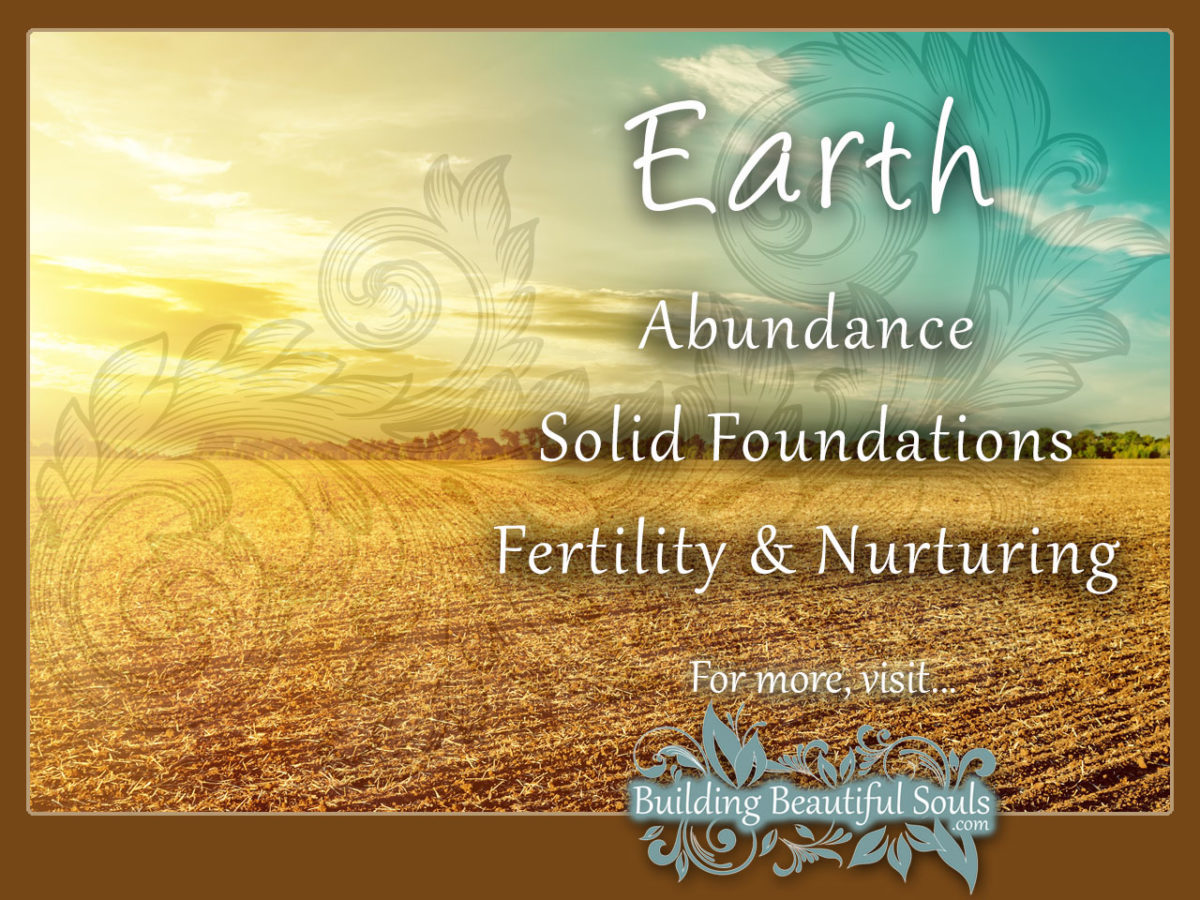 Element of Earth Symbolism and Meaning

Element of Earth Table of Contents

Never does nature say one thing and wisdom another. ~ Juvenal

While each element often carries distinctive connotations depending on cultural settings, there are some commonalities.

The Element of Earth resides at the north of the Wheel of Time and the Sacred Circle. But due to seasons some Light Workers feel this may not be a “fixed” designation.

For example, it makes more sense in Summer to align Earth with the Southern point of creation and fiery energies, or associate it with the West during spring rains.

However, traditionally this one of the Five Elements represents the ultimate feminine principal of the Universe – the Mother Goddess from whom all like comes and returns. She is fertile, nurturing, grounding, strong and constantly transforming as a way of honoring Nature’s changes.

Many stories of the Earth Element include spirits that reside in plants or in a dimensional space just beside our own. These beings sometimes care for the trees and flowers, some live underground enjoying the Earth without human interference and some choose to interact with wanderers – for boon or bane. Stories of elves, for example, portray them as magical. Some help kind hearted folk while others have another agenda altogether. So, in your dealings with Earth spirits, remain aware that they’re capricious and nowhere near as dependable as Mother Earth.

There are various aspects to the Earth Element well worth exploring spiritually. For example, Ley lines – lines of power – are part of that elemental vibration. They criss-cross the Earth and where they join, very frequently you find a sacred space already standing. A good example is the Standing Stones of Callanish in Scotland where myths say an ancient dragon resides, protecting stone circles throughout the world.

The Element of Earth is substantive unlike the elusive Air element. When we think of Earth we can meditate on its beautiful and Healing Crystals & Stones, the soil in which we grow food, the plants and animals it sustains and even visualize it from space as a gentle reminder of our celestial Island. Earth energies facilitate all manner of manifestation by putting down strong roots from which our dreams grow into reality.

That is not to say that the Earth Element has nothing but positive characteristics. It can be fierce. Just watch a volcano erupt or the damage from a quake. This kind of power is why it is so important to respect our mother (you know the old saying: it’s not nice to fool Mother Nature).

Realistically any Color found in nature can represent Earth. However the most common hues used to symbolize Earth energies are Brown, Black and Green.

In esoteric traditions like Wicca, sometimes the symbol for the Element of Earth come out of Nature’s reflections. The orange-gold of Fall or the clean White of Winter when Earth rests are two examples. This is purely a personal choice. Listen to the land and let it guide you.

Metaphysical Applications for the Element of Earth

Earth energies are excellent for geomantic and alchemical endeavors. You can also call on Earth energies for grounding, growth, protection, attraction, hiding (Chimera magic), inner workings of the soul/spirit, cycles and abundance just to name a few. The key is choosing the right components and symbols for your ritual, spell or mediation. An acorn, for example, is a good way to represent potentials. A bowl of grain offered to the ground with a wish for providence is another illustration.

For those drawn to Druidic practices, Earth is a great ally and guide. It offers you a gateway to animal and plant spirits while also providing the stability to keep one foot firmly planted on Terra Firma. This Element also suits magical gardeners, crystal workers and herbalists.

Divination & the Element of Earth

Earth provides the stable environment from which all life (as we know it) springs, lives and thrives. She is our foundation of all things. Earth (aka Mother Gaia or Mother Earth) receives the “seeds” of all other Elements and, in turn, gifts us with abundance.

For any form of divination, the Earth Element provides grounding for both a client and diviner or reader. Seeing some form of the Earth Element in a psychic reading can mean that a client is pregnant or soon to be pregnant. Seeing a garden in a psychic reading could portend that the client is starting or already has a business which will be prosperous.

Below are a few more ways the Earth Element shows up to help us divine the past, present, and future.

The Tarot aligns the Earth Element with the Suit of Coins or Pentacles. This Tarot Suit symbolizes those things we possess – all things “material”. It is truly about the world and all a person may achieve, particularly security and prosperity.

When a person becomes over-emotional Pentacles may appear in his or her reading as counsel to move away from Water / sensitive energies and get grounded again. Pentacles also come up in readings (typically reversed) when you mis-use the gifts Nature offers freely.

Numerology & the Element of Earth

Vibrationally, the Element of Earth is in alignment with the Number Eight. This is an ideal number for the Earth Element being a double-four, which brings balance. In nature, what you so, you reap. Metaphysically that ties into our Karma. Earth energies will not let you hide from your roots, but they will encourage you to keep the garden of your life free of weeds.

Where the Tarot focused mostly on the worldly aspects of the Earth Element, numerology looks at the spiritual – the “as above; so below” aphorism. Nature is not filled with avarice – it simply recognizes needs. What do you need? What do you want? These are two very different questions, and the Element of Earth always brings you back to the more important question of necessities.

Both the Number 8 and Earth are efficient, which is part of what creates successful vibrations. Waste not; want not is definitely one of the Earth Element’s key phrases.

All people born under these Western Zodiac Signs require strong sensual input so they can experience every part of life down to the last jot and tittle.

The Earth Element comes into these three charts with a sense of reality, productivity and the capacity to turn nearly everything they touch into something tangible.

As you might expect, astrologically, Earth people are well grounded. They see the big picture but know you can’t access that until all the other pieces are put in place properly. That drive won’t keep the Earth person from getting outdoors, however.

Animals: Wolf, Bear, Gopher, Worm, Stag, Bison, Ant and all animals that burrow under the soil

When the Element of Earth appears in a dream it typically counsels a need for grounding and perspective. If you feel insecure, figure out the source and let the Earth element restore your stability. Seeing the Earth from space may represent thinking globally. To learn more about dream symbols refer to our Dream Dictionary.

Nearly every Culture encountered has at least one, if not several, Deities that govern the Earth and its vibrational nature. Some easily recognizable ones include Adonis, Bona Dea, Cerunnos, Demeter, Gaea, Pan, Yoruba, Faunus, Artemis, Pachamama, & Ops.