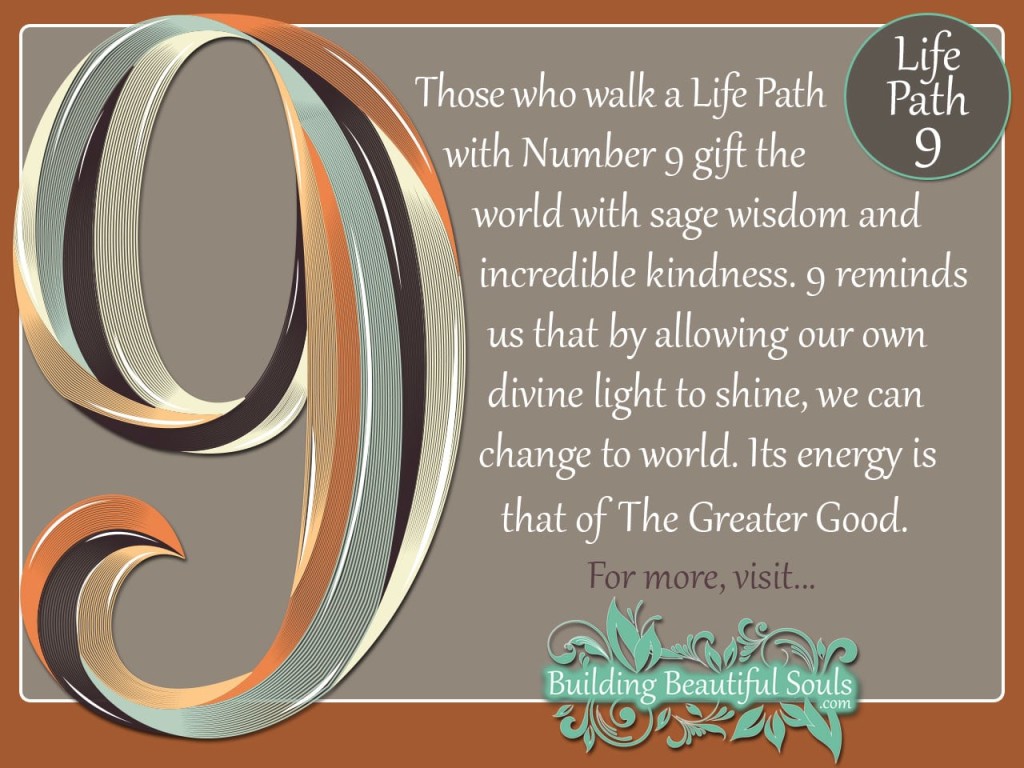 In the meaning of numbers, 9 embraces the uttermost in Universal, selfless love.

By the end of this incarnation, these old souls will have been through the lessons of the first 8 Higher Arcana tarot cards and find themselves in a space of wisdom, insight, kindness and vision.

The lifetime of a 9 is filled with challenges, all of which act on the aura to increase the vibration service to all humankind.

The keynote for this being is “the greater good.”

Those with a Life Path Number 9 have gentle, caring voices in a world often filled with angry noise. As they walk through this incarnation they listen carefully to the people and the world around. This soul is one who acts only after they’ve gathered dependable information.

One of the most charming qualities of the 9 is their ability to take everything just as it is. Oh, yes, they want to right the world’s wrongs, but that’s different than accepting individuals. To the 9 a spirit is like a fingerprint, wholly unique to be explored. There will be times, however, that 9 finds the lack of spiritual ambition or the world’s inequity very frustrating. Here is one of 9s greatest challenges: is it time to step back and sojourn or should you stay and be the hand of karma.

Individuals in the 9s circle find that this person is wholly honest, sometimes to a fault. While they prefer diplomacy, some things simply are to the sage and there’s no questioning whether or not they’ve given you an honest opinion. This can be a hard pill to swallow but listen to teachings of Number 9. They are ahead of you on the road and already know the potholes.

Metaphysically the 9s life is all about culpability, forgiveness and giving aid. Even if it’s only a small corner of it, they will leave this earth plane better than it was before. This makes 9 somewhat difficult to grasp as most humans always look for the “what’s in it” angle. Someone who acts and reacts from a place of love is a rare soul who wears their motivations on their sleeves (which always seem rolled up and ready to work).

The Tarot depicts the 9 as a wise old man – a Hermit. One hand bears a lantern of sagacity that the lights the way, the other a staff of authority to steady his feet.

As he stands in the wastelands, he breathes a sigh. The burdens of the Shamans, the walker-between-worlds, sometime lead to reclusion. That moment of silence is also one of prayerfulness where the Hermit listens to the voice of the Divine, then returns to the world with that message.

To all around he represents the true Path of the Seeker that leads eventually to ascension. The danger with the Hermit, and indeed number 9, is the temptation to linger too long – to stay away – and as a result the 9 brings himself to a standstill.

Like the Hermit, people born under 9s influence have an unquenchable desire to understand the Greater Mysteries. They will have a natural tendency to look within and above for answers in the mundane world. Such people may go to remote locations for to search their soul in the question for ultimate truths. They will likely do this several times in their lives as necessary to the new information they’re processing.

As a result 9 symbolizes sanctuary, contemplation and self-awareness.

9s are rarely consumed with worldly ways. They prefer the company of trees to people because they know exactly where the trees stand. It’s not surprising to find 9s living in undeveloped wilderness regions. This is not simply due to the need for regular solitude, but also so that unworthy people give up looking, while the soul who is ready does, indeed, find the teacher.

Additionally they can mete out the 9s propensity for charity, compassion and service from such locations without leaving themselves with no reserves.

9s always seek out the right, best answer. They use love and inspiration to drive solutions. People naturally want to put 9 in a position of authority – a place, we might add, that 9 doesn’t always enjoy. While it is easy for them to help others, asking for personal help is a whole other matter.

We find further evidence of 9s significance in various world faiths and myths. In China, 9 represents the magic and power of the dragon (who also has nine children). In Greece, the Muses who embody the great arts number 9. During the Middle Ages the Nine Worthies appear in stories characterizing nobility and honor. Finally in both Baha’i and Hindu faiths, 9 is completeness or perfection.

While the 9 may not see themselves as perfect, their soul is on a journey toward completeness. If they listen to the Voice of God and let their light shine, they will change everything they touch.

Number 9 As an Expression or Destiny Number

A bright optimist, this Destiny Number makes for a brave, hardy soul who isn’t afraid to walk alone. The on-going changes in life don’t seem to phase them, and no matter what happens they accept this incarnation with uncommon grace.

Once set to a task the 9 strives for positive completion. Those walls in the way? They’ll climb over, walk around or bash them down.

The 9 Destiny Number is the humanitarian. 9s have natural empathy and sympathy toward humankind’s lot. As a result, it’s not surprising to see 9 working a soup kitchen or a park clean up unexpectedly. They just show up and do the work, then leave as quietly as they came.

Throughout the life of a 9 in this incarnation they will illustrate their Spiritual Path through deeds more than words. The 9 is all about “walking the talk” and honor means something very near and dear.

When it comes to friends and family, unscrupulous people need not apply.

Number 9 As a Heart’s Desire or Soul Number

Typically this soul has been around the Wheel of Life a few times or more, which is how they developed their strict idealistic nature. Peace, hope and joy are the three words that trip from the tongue of the 9 as easy as honey.

What’s truly astounding is that they MEAN it. Not a word leaves the 9s mouth without thought and intent.

People with the Soul Number of 9 find themselves wanting to help in some form. Some may teach, others become Light Workers and healers and some may move to the forefront of a spiritual movement. The 9 must use caution, however. You cannot fix all the worlds ills at once. Choose one or two focused causes so you don’t spread yourself too thin and accomplish nothing.

If you’re looking for romance, seek out a 9. This is the hearts and flowers of Numerology. Making beautiful, inspiring gestures is a natural part of the underlying language of service. 9s make very devoted mates who seek out others that likewise immerse themselves in the passion of the moment.

9s make relatively good parents with some struggles. It’s difficult for children to understand the rather lofty nature of the 9s mental process. They also don’t understand why the 9 must go away regularly, which can lead to a sense of abandonment. If there is a way for the 9 to integrate their family into retreats (like a camping trip) that should smooth over the 9s issues in that regard.

Socially 9 is popular, and often too much so for their tastes. While they love good wine and food, along with luxury this seems in contradiction with the 9s overall vibration (and it confuses them too). The best balance to these tastes is giving to oneself as you give to others (think “one for you, one for me”). That way you feed your altruistic nature while also recognizing personal needs and desires.

Career Number 9 has the natural ability for leadership, even if they may shy away from it (too much limelight). Their visionary aptitude, decision making skills and overall wisdom make them a fin addition to any job where they can get regular time off for retreats. The 9 isn’t afraid of a challenge and may actually over-reach. When they move into a joy with caution, however, 9 finds success in any service oriented field including nursing, childcare, holistics, social work and education.

In working with others 9 must remember that not everyone else sees the world as do you, nor can they keep up with your pace. Watch for those other light beings for which you yearn, and when you find them give them praise for the efforts that often go unnoticed.

In Tarot Card Meanings and symbolism the Number 9 is associated with The Hermit Card in the Major Arcana. The classic Rider Waite tarot card deck depiction of this great humanitarian symbolizes a soul who has incarnated to “wrap things up”.

As the last of the single digit numbers, 9 (and, so, The Hermit) speak of the being who has come in to learn final, and sometimes very hard, lessons in compassion, forgiveness, selflessness, service to others, etc.

Choosing to be born as “The Hermit” means you are planting the seeds of ascension. You are cultivating your final spiritual lessons before moving to the next level of evolution.