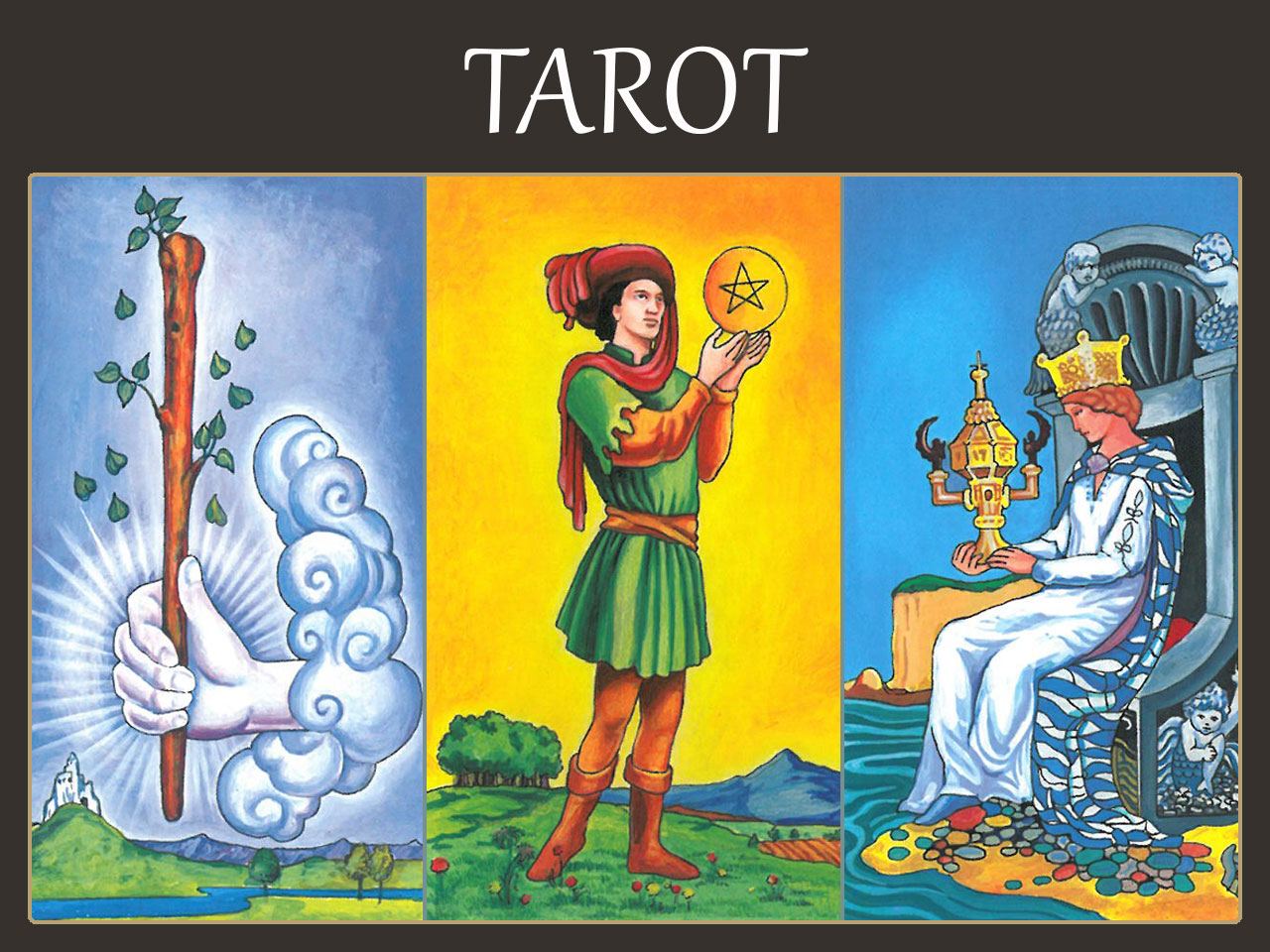 Feel free to contact me if you have any questions!

What’s in a Tarot Deck

Tarot is one of the most detailed divination systems available, and is one to which anyone can relate. Learning the Tarot is a wonderful way to develop your intuition and stay connected with time-honored esoteric tools for spiritual growth and awakening!

A typical Tarot deck has 78 cards and is based on a regular set of playing cards. The deck is divided into 2 overall categories (Major Arcana & Minor Arcana) and 4 ‘subcategories’ (Cups, Pentacles, Swords, Wands). 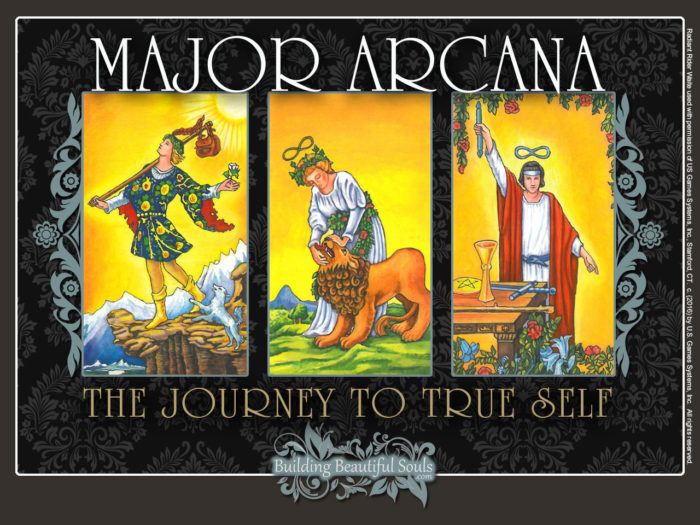 22 cards make up the Major Arcana (Court Cards in a regular deck).

The Major Arcana is designed so that each one ties to one of the archetypes set forward by Jung along with the Tree of Life, parts of the I-Ching and even Runes.

By comparison most readers see Court Cards as people in the seeker’s life, or perhaps elements of his or her personality coming to the forefront. 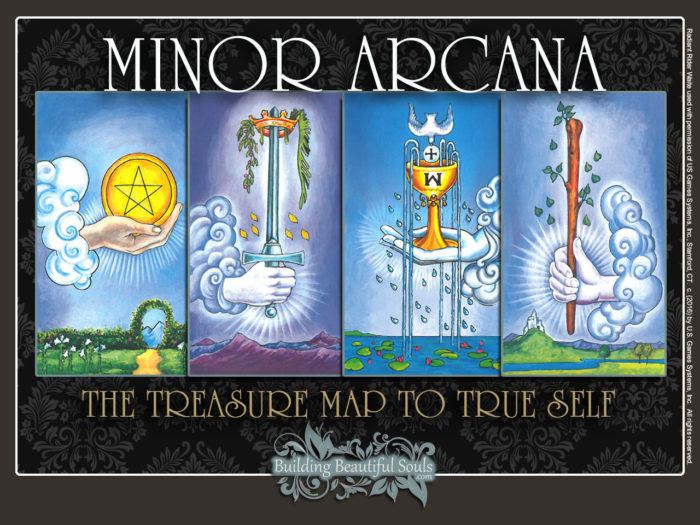 56 cards are in the Minor Arcana.

***Note that some writers and illustrators call the suits by different names (for example shells instead of cups if a water-based Tarot), but the foundational symbolism remains.***

Each of the 4 tarot suits has specific characteristics and correspondences with the 5 Elements, Astrology & Zodiac, Cardinal Directions and Seasons. All relevant metaphysical and spiritual correspondences listed on each tarot card description and linked to the appropriate page.

Suit of Cups – represents emotional elements in our lives and the psychic self.

Suit of Swords – governs the mind, perceptions and decision making (including the struggles that often follow).

Suit of Wands – has an active element, it’s about something that is moving or doing.

How Does Tarot Work

Most often tarot readings involve two people – one asking a question and the other who reads the cards. The person with a question shuffles the deck, thinking on that question, and cuts it. The reader then draws a set number of cards that are laid out in specific patterns and interpreted for the querent.

The magic, if you will, is the way in which the cards reflect the questioner’s thoughts. From a Light Worker’s perspective, it’s thought that the reader uses the tarot as a bridge to the Higher self and our soul memory.

Each tarot card tells a story and it’s one that the vast database at Building Beautiful Souls will help you learn to read.

In working with the Tarot remember that cards can individually tell a story, a set of cards gives greater detail on that story – but the entire Tarot set also has a collective element that speaks to the commonalities in all Human experience, both in thought forms and emotion.

That’s why it’s very important to pick a deck with imagery that speaks to your path and archetypes to which you personally relate.

Can Tarot Cards Make Me A Psychic

Do you NEED the Tarot to access Divine whispers or your own Inner Guide?

However, many times people get blocked. They cannot get past the self and the concrete world into something that is truly instinctive and built in faith. That’s where divination tools come in. They help us access that creative, intuitive energy and see things more clearly. That’s when a tarot reading’s story begins to emerge out of what appears to be randomness.

There isn’t a lot known about Tarot cards other than we see them discussed in the 15th century, Italy as part of a game called Triumph.

The face cards of the Tarot were added to a basic deck as trump cards, the entire thing resembling a game of Bridge. The game of Triumph became very popular and soon spread to other parts of Europe.

It wasn’t until the late 1700 that occult practitioners happened across the cards and saw the potential of the imagery for far more than an afternoon game. This may have happened in part thanks to a 1770 book of cartomancy by Etteilla, setting the stage for a far more formalized fortune telling tool that included correspondences with the Hebrew alphabet and integrated ideas from Cabalistic mysticism.

By the 20th century the Tarot took hold in various esoteric societies including the Order of the Golden Dawn.

From that point forward, use of the Tarot grew in metaphysical settings. Hundreds of new decks with diverse themes have been created, making it easier for practitioners to find a deck that speaks to them on a deep level.

How can Tarot Cards help Build my Beautiful Soul

Some people laugh at the idea of using cards as a way of getting answers to life’s many questions and choices. However, when you think of it as a tool that unlocks your inner psychic it makes more sense.

Symbolism is very powerful, and the images in the tarot endeavor to tap that Collective Unconscious that ties us to all places and spaces, including the Akashic records.

The key for most people is learning how to interpret and apply the information revealed.

This is not a fast process. If you’re looking for drive through divination systems – the Tarot is not for you. However, if you’re looking for a system that not only expands your awareness but also reflect and help you on your spiritual journey, then get comfortable and keep reading.

As you explore the tarot further it helps to make yourself a Tarot diary. Here you can put down reflections and insights gathered from each card or reading and give greater dimension to your on-going experiences.

You will find in the days and years ahead that you can return to this book and find whole new perspectives from the very same notes. That’s because you are growing as a spiritual being and expanding your psychic aptitude with the tarot and Building Beautiful Souls as a guide.

We trust that you find the diligently researched information in these pages support your journey.