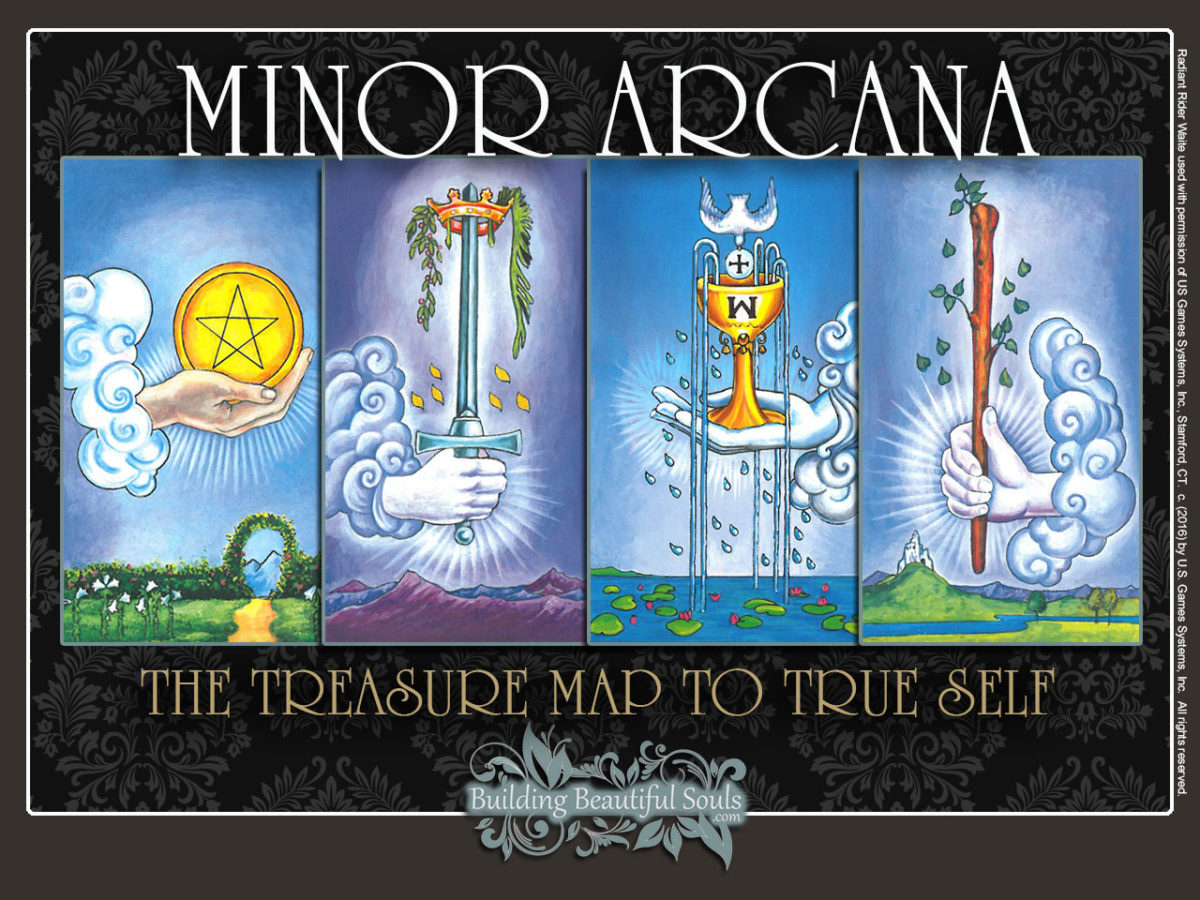 Whereas the Major Arcana tell the story of the soul’s journey through the universe, the Minor Arcana describe the universe.

In a sense, they’re your road map; the juicy details that make a good story great! Below, click on the Tarot suit you want to learn more about! Scroll down or click to learn about the Minor Arcana symbolism and meanings!

The Minor Arcana describe the physical, emotional, intellectual, and spiritual aspects of the universe. They point out situations, events, challenges, and lessons to be learned in this lifetime. Sometimes, they also show specific people.

On the Tree of Life, they represent the fixed points, or Sephiroth, in their various elemental aspects. The Major Arcana, on the other hand are the paths connecting the Sephiroth. So, understanding the Minor Arcana’s meanings and symbolism is super important in a tarot reading though a solid reading can be given using only the Minor Aracana or the Major Arcana.

The Minor Arcana are divided into 4 suits of 14 cards:

Each suit corresponds to one of the four alchemical elements:

In this order, the suits also represent your physical world, emotions, challenges or conflicts, and actions.

In the past, the Minor Arcana suits were also used to identify social classes;

Each suit is divided into 10 “pip cards” (Ace through 10) and four court cards (Page, Knight, Queen, and King).

The Aces symbolize a suit’s basic essence. The Ace of Pentacles, for example, is literally the seed of material prosperity or well-being. The tens represent a suit’s full development.

Think of the story being told in the reading as unfolding this way:

“The seed planted in the meanings of the Ace of Pentacles eventually grows into a mighty tree in the 10 of Pentacles card. The middle cards (2-9) are the various stages of growth with all lessons to be learned in between.”

The court cards can symbolize persons, but not always. For example, the pages represent very young men or women (they’re called princesses in some decks) and the knights, young men. The Queens represent mature women and the Kings, mature men.

But from a more esoteric perspective, they represent the various elemental aspects of each suit. These aspects are derived from their position on the Tree of Life.

The Page is the Earth aspect, which means that the Page of Swords is the Earth aspect of Air. Think of the smoke from burning incense when you’re saying a prayer or meditating. Its negative aspect would be a bit like a sand storm or dust devil.

Knights are the Air aspect of an element, Queens the Water aspect, and Kings the Fire aspect.

Minor Arcana In a Tarot Reading

The Minor Arcana mainly deal with what is, the big and small things that happen in everyday life.

These tarot cards are concerned with things like jobs, wealth, your social life, love, and plans in general. They also relate to more abstract questions, like philosophy, morals and ethics, or your religious and spiritual beliefs as they affect you in the here and now.

As a rule, the Minor Arcana will always outnumber the Major Arcana in a reading. After all, you spend most of your life in the physical world. When there are fewer Minor Arcana in the spread, you’re getting some very powerful messages from the universe.

If you’re getting a lot of the same types of cards in a reading, the Tarot is drawing your attention to a specific aspect of your life. Four or more Pentacle cards in, say a 10-card Celtic Cross spread, will point to important developments in your material circumstances, such as health or prosperity. That may seem confusing if your question had nothing to do with that.

Say you actually wanted to know something about your love life and now you see a bunch of Pentacles – but hardly any Cups. Depending on the specific cards, this could mean finances should be examined before you can even think about dating – or that your finances or health are now stable enough to attract love.

Likewise, when you see three or more of the same number in a spread, pay attention to the meaning of that symbolism and meanings of that Number (Numerology). Ones announce new beginnings, while Fives point out potential bumps in the road. Nines may provide information about an ongoing pregnancy, but they also suggest that long-term developments are about to come to an end.

When you see a lot of court cards (Page, Knight, Queen, King), be on the lookout for new people coming into your life. Sometimes, each card will signify a different person, but they can also point to different aspects of the same individual’s personality.