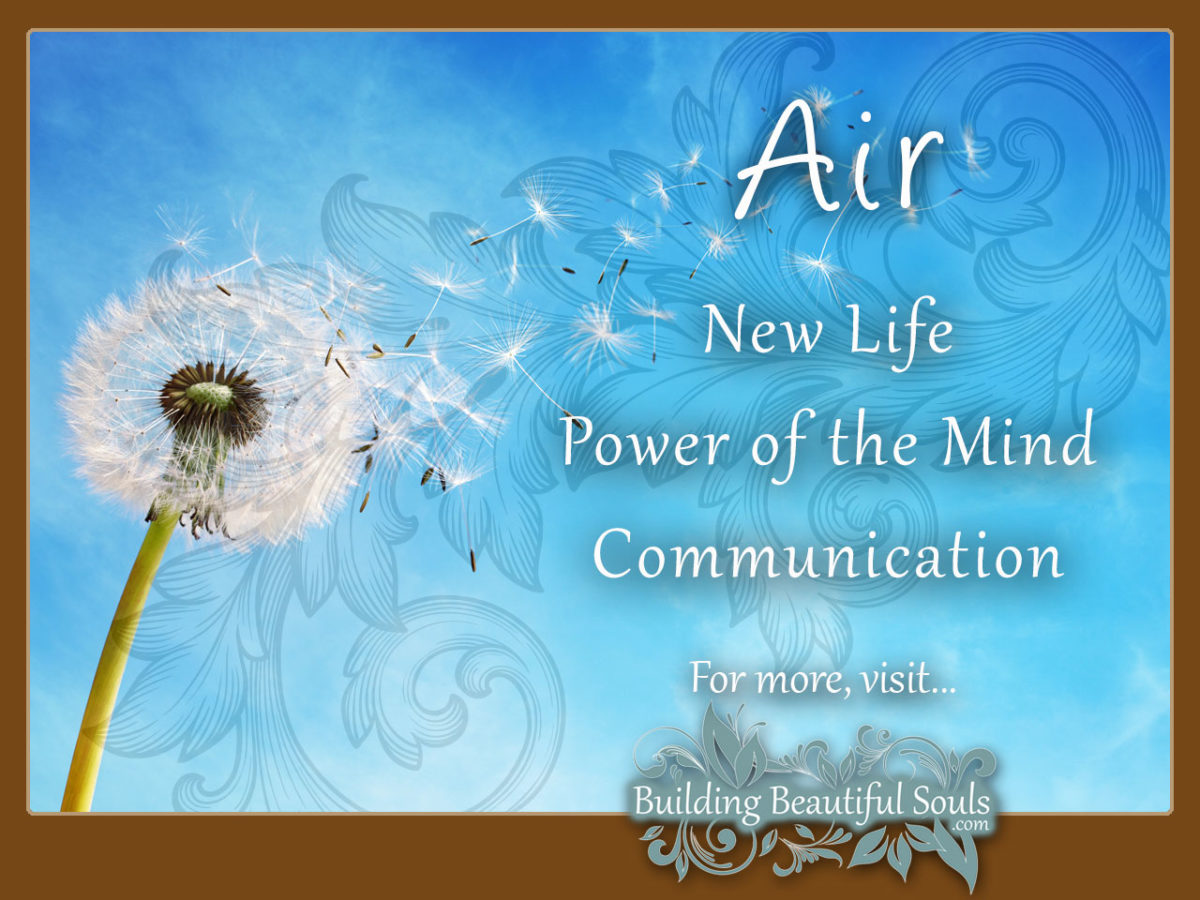 Element of Air Symbolism and Meaning

“We all breathe the same air.” ~ John F. Kennedy

Element of Air Table of Contents

The Element of Air is a powerful teacher and divination tool.

In Western Esoteric and New Age traditions the entirety of the world’s energy has five associated elements, namely Earth, Air, Fire, Water and Spirit (aka Aether or Ether).

Each of these elements has specific vibrations and characteristics that you can use in magic, meditation and Feng Shui (just to name a few).

They key is understanding each element more intimately so you can apply them with the greatest amount of effectiveness.

The Air Element corresponds to the Eastern part of creation. It symbolizes a vast network of vital breath, from the winds that brought the Universe into being to the first cry of a newborn baby or first breath of life (Om). Where Earth is “fixed” air is most definitely a mover. It’s also connected to the mind, wisdom, spirits and the soul.

Classical Greek philosophy separated the Air element into the atmosphere where we live and a higher region above the clouds. When they wrote about Aer it was the lower form vs. Aether – something filled with light energy. Aristotle went so far as to consider Aether something that created celestial spheres.

In Sacred Geometry the symbol for air is the octahedron, cementing the Air element between fire and water alchemically. Now before that sounds overwhelming, remember that the Greeks loved sounding lofty. On a much simpler level this means that Air energy can work with fire or water, and it also can become an intermediary or bridge between the two.

In Hindu writings the word for Wind is Vata, which means to blow. There is also a second word, Prana that symbolizes the breath of life. Prana is a Father God, and his breath is one of the five sacred elements in this religious tradition.

By comparison, Air doesn’t appear in Chinese systems. What we do read about is Qi, which is a vital force or spiritual flow and breath. As in the Western world, this force is everywhere and part of everything yet it cannot be seen. We experience Qi much as we experience wind as a manifestation of the Air Element – with various senses and by observing how it affects other things.

The Element of Air is an excellent representation of spiritual faith. Air reminds us that there is much more to this world than what we can see , and also teaches that we must grow and change as the world does likewise:

The pessimist complains about the wind;
The optimist expects it to change;
The realist adjusts the sails
~ William Arthur Ward

We cannot capture or tame the Air, but we certainly know it’s with us. It can be tempestuous or still, or as gentle as a puff on a birthday candle.

While nearly any pale Color can represent the Air Element the most common two are Yellow and White.

The Color Yellow symbolizes the season of Spring, which also correlates to the Air Element. Yellow ribbons became a way of showing support to soldiers or commemorating their service. For light healers, yellow brings peace into the auric field. Other associations for yellow that carry over to the Air Element includes creativity, intellect, happiness, clarity and perception.

The Color White has similar meanings psychologically and metaphysically with the extra layer of purity, Divine radiance, concord and honesty. The wind will not lie to you if you listen closely. It can also help you move things that block your path and give you a chance for new beginnings.

Metaphysical Applications for the Element of Air

Light workers typically classify Air as masculine vs. the very feminine nature of the Earth Element. In Wicca, people often use a wand to represent the air thinking of it much as the moving branch from which it came, touched ever by the winds. Other traditions correlate Air with the sword because the movement of a sword allows us to hear what we cannot see.

No matter where you travel, however, there are strong magical associations between the Air and Elemental Beings or Devas. Think of the fairies flying on the wind – creatures of pure intuition that go where the air whispers. The Air Element is the one to work with when endeavoring to see or contact such creatures. It is also a good helpmate to communing with ghosts and determining the presence of spirits that may lurk in previously unknown haunts.

As long as there is breath and thought there will be the element of Air. Just as water needs emotion and earth needs stability – air requires these simple, but powerful things to empower any mystical endeavor.

Divination & the Element of Air

Air, and more specifically the wind, appears in a variety of divination systems. From observing how the winds move the clouds or trees to holding a handful of dirt to the breeze and seeing what patterns it forms, Air carries a message. The Chinese, Greeks and Romans all listened to the wind and paid attention to what direction it comes.

Perhaps that’s why the aphorism, “the winds have changed” exists.

Generally speaking winds arriving from the South and East portend good things. Sudden alteration in wind direction likewise predicts transformation or change, not all of which is good. The voice of the wind matters – is it gentle or angry?

The Aborigines used wind divination as a means of receiving messages from the Divine. Native Americans still consider the wind spirits good helpmates and harbingers.

In the game Mahjong people sometimes draw tiles to determine their fate. There are four wind tiles. Getting the East Wind speaks of powerful forces including the ancient Dragon and new beginnings likened to Spring. The South Wind is good luck and potentials. The West Wind has to do with new beginnings and relationships. Finally the North Wind speaks of struggles and the need for patience.

In the Tarot the Wind Element is represented by the Suit of Swords. As a mantra the Sword’s Suit says “divide and organize” or “divine and inspire”. Swords like the Air Element often symbolize an epiphany (the proverbial AH HA) of our mental processes. The Suit of Swords is all about clearing out clutter, even as a good wind blows away fall leaves leaving the Path sure. The counsel of the Sword is simply that just as our opinions and thoughts (particularly when they manifest in word or deed) may bear two edges.

Numerology & the Element of Air

It is interesting that both Earth and Air correlate with the symbolism and meanings of the Number 8 in Numerology. When speaking of the Air Element the vibration of 8 creates change, usually in the areas of finances, career or personal power. It emphasizes balance in various areas of your life and listening carefully to the urgings of Spirit in your life. Wind is not static; it bends and weaves, and when you work with this Element or find it presenting itself in your life, you may find your need for adaptability challenged.

On a spiritual level, the Number 8 and Air both connect the here-and-now to mystical realms. There are many dimensions. It’s time to see what you have not seen, or perhaps what you’re not willing to recognize. You will need an odd combination of control with whimsy and spontaneity. Run with the wind – see where it takes you.

Libra, Aquarius and Gemini are all ruled by the Air Element. These three Western Zodiac Signs share very strong intellectual aptitude and intense curiosity, which often makes them eternal students in life’s classroom. Air Signs can be somewhat hard to nail down, just like the wind. People born under these signs have strong emotions and love to talk or tell stories.

Air people have the gift of flexibility, adapting to new trends readily. People trust them for having good ideas and interesting perspectives. Highly social creatures, they use each opportunity as a way to gather concepts for processing into the next conscious focus.

Those born with the Air Element can become so etheric their conscious can literally “float” away. Meaning -they are not centered or grounded in this reality and life seems to “blow” them around rather than them controlling their own journey.

This is when practices like meditation become helpful for greater grounding, as does pairing with an Earth-centered person. In relationships, air people are a little aloof, but they pay attention to everything and remember those important “little things” that keep a partner interested.

Crystals & Stones: For those born into the Air Element it can be really helpful to surround yourself with Healing Crystals & Stones that support clarity and lucidity, including spiritual visions. They are also excellent choices for improving your intuition, safety in travel, and boosting your communication skills. Suggestions include Blue Aventurine, Citrine, Diamond, Labradorite, Moonstone, Topaz and Zircon.

Animals: As you might expect, most winged creatures that fly come under the Air Element’s dominion. Some specific creatures that have strong Air associations include the Bat, Butterfly, Bee , Eagle, Hawk, Humming Bird, and Owl.

Plants: When you think of Air plants, visualize those that move gently on the winds. Some that have been traditionally associated with the Air Element include Anise, Birch, Cedar (due to the aroma), Lemongrass, Pansy, Primrose and Violet.

Dreams about Wind or Air frequently represents our life force and overall energy. A week wind can imply a similarly weekend spirit. A wind at your back in the dream speaks of support and motivation – forward movement. Gail winds portend troubled waters ahead. You can learn more about Wind symbolism and the Air Element in our Dream Dictionary.


2 thoughts on “The Element of Air Symbolism and Meaning”