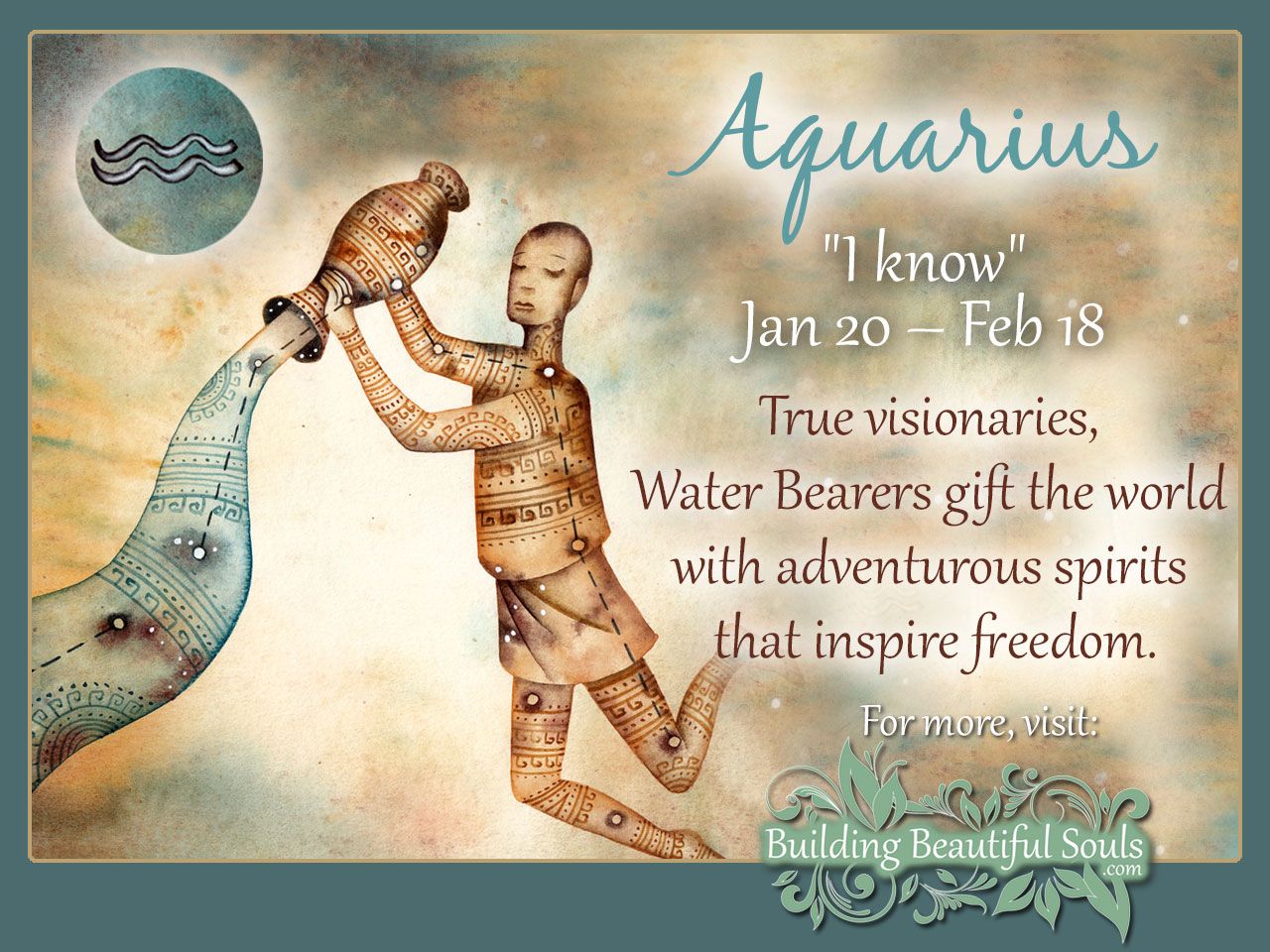 Aquarians are the true star children of the Zodiac. Those born under the Aquarius sign are the consummate forward thinking dreamers and doers.

If you’re looking for a cause and a rebel to lead it – you’ll find both in this zodiac sign.

Once the dawning of an opinion forms it remains firm F.O.R.E.V.E.R.

They test the water of that outlook with both feet and rarely look back. The Water Bearer manages to do this without spilling a drop on other’s dogmas and beliefs.

Friendly, benevolent, loyal and smart, the Aquarius sign has no problem making friends but sometimes their gentle soul gets stomped on by less scrupulous game players. The Aquarian does keep their head above water in the end, but it takes a long time for those wounds to heal.

The best summary of the Water Bearer’s spirit is eccentric, followed by eclectic. Even the best of psychics can’t predict their often radical movements or moods.

Emotion rules the proverbial roost as does a rock-hard sense of independence. Freedom comes at a cost though. This star sign often stays to themselves and, because of this, comes off as aloof.

Many born under the Aquarius sign are tall and lean. Often they sport a thick head of lovely dark hair. No matter where they sit or stand they have piercing eyes that constantly seek out something new and unusual.

Because food isn’t a focus for the Water Bearer they rarely put on too much weight. When you do eat enthusiastically its rare and unusual foods.

The most vulnerable part of the Aquarian body is your ankles.

Aquarius Symbol and Its Meaning

It may have received that designation because the constellation rose in Western Asia just as the sun went down. When the full moon joined the Water Bearer, the rainy season began.

Art depictions of Aquarius shows a man pouring water down from the heavens. This man was originally the sky God Ouranos who controlled the weather using the winds. Ancient astrologers designated Aquarius as an air sign as a result.

A Greco-Roman myth tells us that on Winter Solstice Hades releases Persephone to visit her mother who is an earth and grain Goddess.

When Persephone visits, Demeter (Ceres) releases the cold grasp of winter and Aquarius provides water so the land returns to abundance.

It’s an interesting aside that the main stars that form the Water Bearer all have Arabic names that tie to luck.

For example the brightest of the Aquarian stars, beta Aquarii, has the more ancient designation Sadalsuud, meaning luck of lucks.

So, Aquarius symbolism and meaning includes a little serendipity.

Aquarius Compatibility, In Love & In Bed

Libra knows when to come close and when to let the Water Bearer have privacy.

Sagittarius is an outrageously sensual match that tempts both people to stay in bed all day long, but they won’t because they both want to get out and boogie.

When it comes to “marching to a different drummer” the Aquarian will join the Piscean in their merry tune. This sometimes lands the youthful and exuberant Water Bearer in a bit of hot water. So keep a protective eye on your child.

You’ll never know what they’re up to but you can trust it won’t be dull as dish water or lack for ingenuity.

Your child will have all manner of friends and don’t be surprised if some of them are adults. They are curious about the whole world and all the unusual things in it. This is not the kid who turns up a sour nose at trying calamari, snails or other odd foods.

Advice: give your Aquarius child as much mind candy as possible, and where feasible a healthy dose of autonomy. Without that you may end up with a sad, unruly water bearer ready to rain on your parade.

Your Aquarius girl is a curious soul.

She takes to new ideas and activities with little need for explanations. In fact, figuring stuff out alone holds a great deal of fascination.

This child is constantly on the move exploring and adventuring (be ready to catch your breath).

They also have a strong attraction to social interaction and responsibility. Your house will become a revolving door to all manner of proverbial strays.

An Aquarius boy is electricity personified. This child has energy plus!

Combine that with charm and a sense of humor and he is bound to have other children circling him like protons around an atom.

Stay on your toes because when he’s not leading the pack, he’ll head off on his own with a head filled with whims and contrariness.

Avoid jobs where you have to work in tight places. Positions in the travel industry are great for the Aquarius’ gypsy soul too.

If you can be on the move, you won’t job hop so much. 9-5 drudgery isn’t really in your cards either.

Freelancing is more apt (pajamas and coffee while telecommuting – here you come).

About the only time a regimented schedule works for Water Bearers is when you get involved in cutting edge fields where your curiosity soars.

Because of this star sign’s propensity to constantly flow from location to location, they may avoid pets. Should they settle down and finally get an animal companion it’s has to be as unusual, intelligent and interesting as possible.

The Aquarius personality loves participating in mental games that really challenge their intellect.

Chess is one example as well as certain video games like Minecraft and Civilization.

They also like getting out in the wind where they really feel their freedom so don’t be surprised by a skydiving or ballooning hobby.

Best Gifts for a Aquarius

One of the more recognizable Aquarius traits is that they love to laugh. Give them tickets to a comedy club and they will think you just handed them a winning lotto ticket.

Or look to something really unique like an antique coin from a country to which they hope to travel. Innovative clothing and accessories appeals too. Think esoteric and you can’t go too far off field.