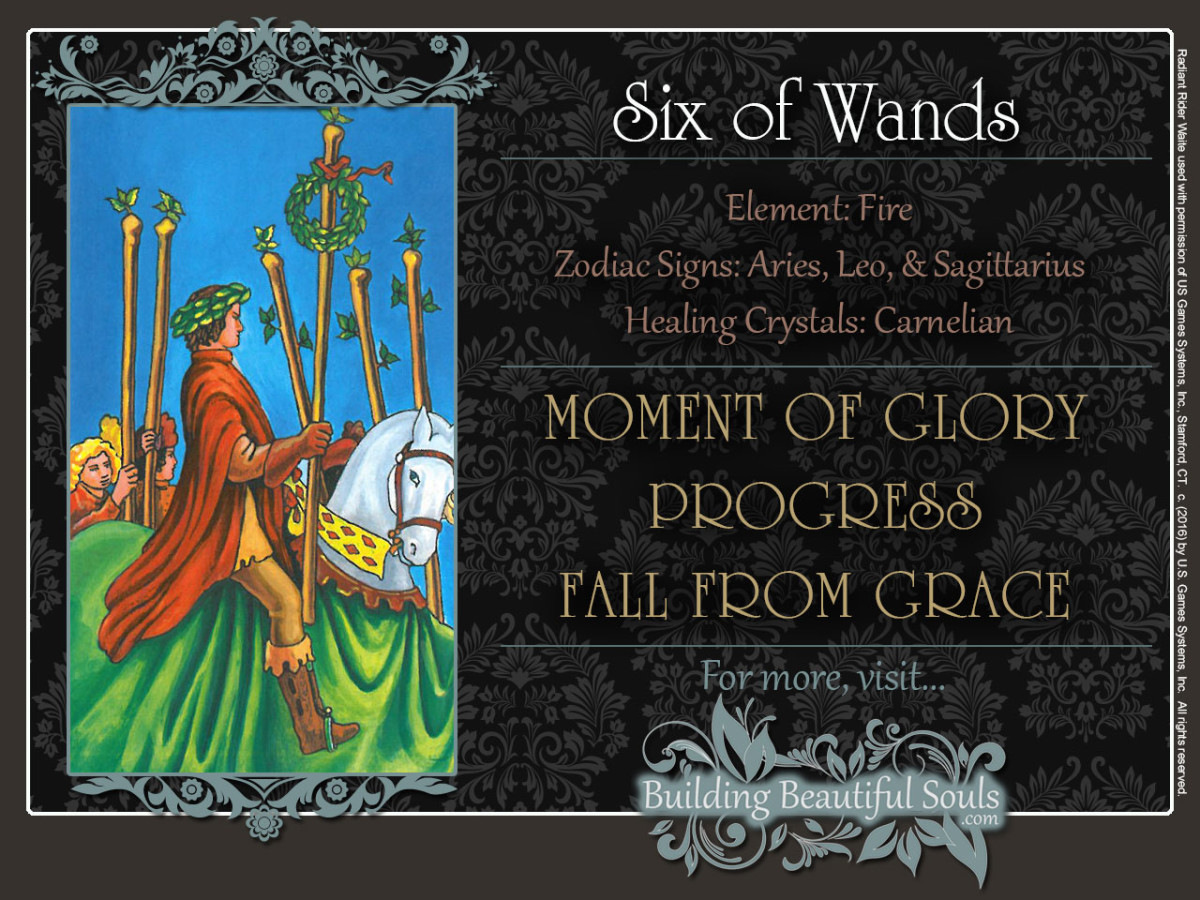 The Six of Wands Tarot Table of Contents

Bask in your moment of glory. It’s time to take center stage!

Jupiter has taken up residence in Leo, letting the whole world know that you’ve been blessed by powers in very high places.

Everyone agrees that you have accomplished great things. So go ahead and tell your story for the 27th time.

People are listening attentively, and they’re taking notes. You have inspired them!

Kabbalists call the Six of Wands tarot card the Lord of Victory, and your victory is outward as well as inward.

As the crowned rider, you have built on the energetic momentum of the Ace of Wands. The staff you’re carrying is crowned with a laurel wreath, a symbol of victory.

Note that the staff and wreath in the Six of Wands form the alchemical symbol for salt, meaning that you’re pure in mind and body. You have succeeded by doing the right thing.

Your head is crowned with laurel as well. People admire you not only for your deeds but also who you are as a person.

Wearing fiery red and solar orange, your yellow shirt reveals that you haven’t exhausted your energies by a long shot. Yellow is associated with air. There’s still plenty of oxygen to keep those fires burning.

Holding your horse’s reins in your other hand, you lead it past your admirers at an energetic canter, slowing down just enough to be seen and recognized.

In the Tarot, horses are symbols of movement and power. The horse in the Six of Wands is white to signify your pure intentions. The green cloth barding shows creativity, prosperity, and love.

The five staffs held by the men on the ground in the Six of Wands are a reference to the Five of Wands, meaning that this card also promises victory after a struggle. The staff in the rider’s hand forms the Roman numeral “VII” with the three staffs on the right. This shows that you can face any challenges that may lie ahead with confidence.

So don’t be shy about it. You’ve done something wonderful. It’s only right that you’re getting the recognition you deserve. You’re a down to earth person, so you’re not letting any of this go to your head.

Plus, you’re wise enough not to rest on your laurels. You know this is just another step in your journey through life. While you’re enjoying this moment of glory, you are also looking at the journey ahead.

Yes, it looks like the scene in the Six of Wands is a bit of a boys club. But that victorious rider coming home from battle can easily be a woman.

In fact, young Sgt. Leigh Ann Hester showed exemplary bravery when she saved the lives of her fellow soldiers in Iraq when their Humvee was disabled by a roadside bomb. Her valor made her the first woman to receive the Silver Star since World War II.

The Six of Wands not only shows that you are getting the recognition you deserve, it also suggests that your actions inspire others.

It’s an especially good card in a career tarot reading. Your superiors have been watching your progress for quite some time, and they like what they’re seeing. That promotion or bonus you’ve been coveting could well be in your reach.

In a tarot card reading about love, the Six of Wands tarot card suggests that a long standing friendship may change into a romantic relationship. Why not? Neither of you is attached, and you’ve learned to trust each other over time. There’s no need to be afraid. It’s true, your friendship is changing, but it’s being enriched, not threatened.

The Six of Wands also encourages you not to let fear or misplaced feelings of guilt stand in the way of your success. The white horse shows that your way of getting ahead has never stood in conflict with your values.

Sometimes, the Six of Wands tarot card announces good news from official or government sources. So keep checking your mailbox.

When reversed, the Six of Wands tarot card cautions that it may be a bit too early to celebrate.

Go over everything with a fine toothed comb one more time. Have you missed anything?

Your sense of optimism may be misguided because it’s based on emotion alone. It’s important to have a great attitude. A bad attitude is a sure fire recipe for disaster. But when considering major commitments, it’s important to make sure that the facts are as good as your attitude.

If the numbers don’t look good, it doesn’t matter how optimistic you are. Reality will catch up with you in the end.

Are you trusting the right people? Take stock of your emotional household. Look for overwhelming feelings that could impair your judgment.

When you feel like you’re on top of the world, you are especially vulnerable to people who don’t have your best interest in mind – even more so when you are desperate.

Yes, standing in the limelight feels great. But remember that your success can also attract a lot of envy. Some may not be able bear the thought of you doing better than they, and they’ll go to great lengths to find skeletons in your closet.

So it’s a good idea to be on guard against those who’d love to see you fall from grace. Prudence is a virtue.
Keep in mind though, that there’s a big difference between caution and fear. Again, stay grounded in the facts and avoid playing paranoid “connect the dots” games. You could easily come up with the wrong picture.

The reversed Six of Wands card may also suggest that the success of a project you’ve been working on may not be as big as you hoped. You may not end up being a charts topping rock star, but your music will still pay the bills. That’s success, too.

Perhaps your moment of glory only amounts to the proverbial fifteen minutes of fame. All good things come and go. Who’s to say they won’t come back?

Kabbalistically, sixes are associated with the radiant energy of the sun. In traditional Numerology, 6 corresponds to Venus and the power of joy. When these energies combine in the Suit of Wands, your success and happiness is an inspiration to others.