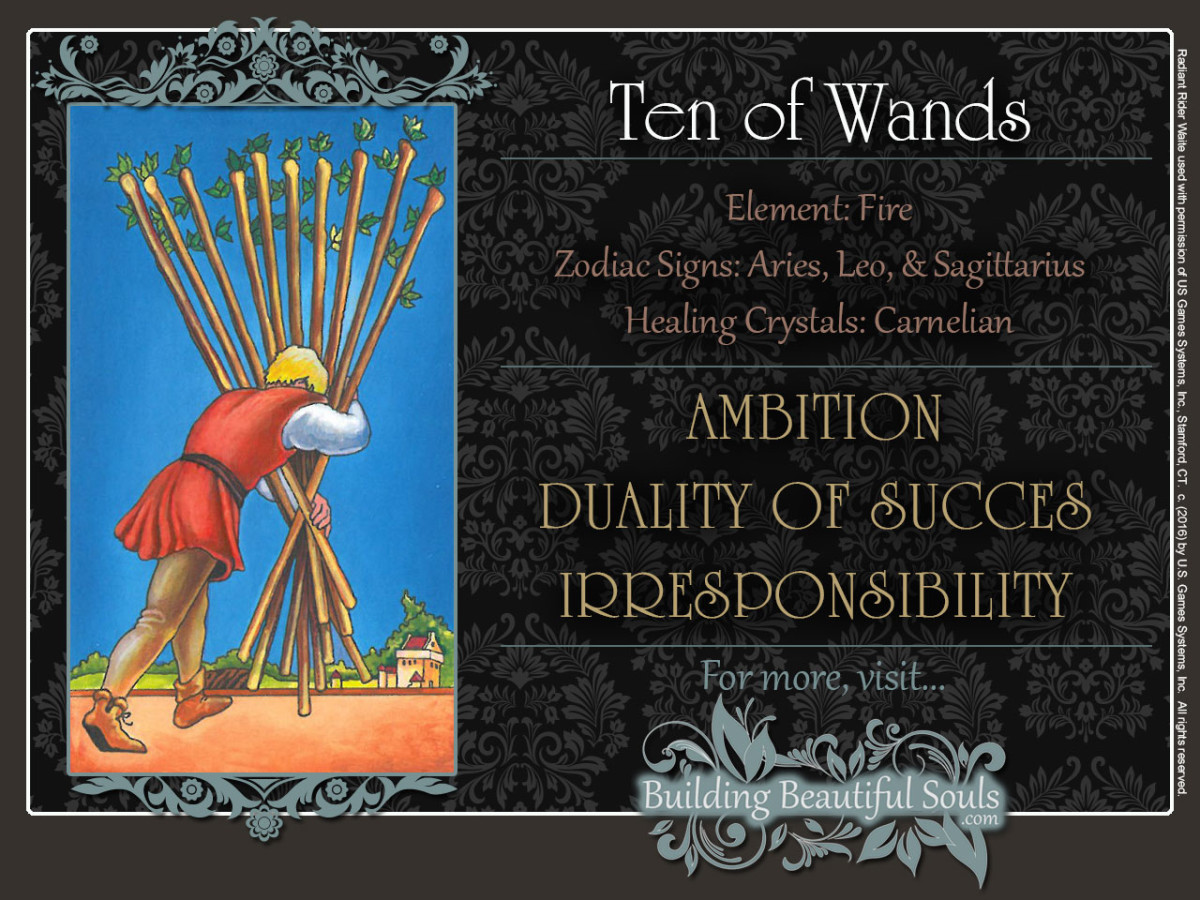 The Ten of Wands Tarot Table of Contents

You reap what you sow, and the harvest is bountiful in the Ten of Wands.

That can be good or bad, and the image in this card powerfully shows the dualistic nature of the Ten of Wands.

A man dressed in yellow, orange, and red – colors that symbolize energy and fire – carries a heavy bundle of sticks toward the town in the background.

The harvest is rich, but the bundle is so heavy that he has to lean forward to carry it. The town in the Ten of Wands is a place of rest and stability. As you can see, it’s a long walk until he gets there.

Note that the fanned out sticks are blocking his vision.

He can’t see the postcard blue sky above him on the Ten of Wands tarot card. He can’t even see where he is going. His harvest is rich, but all he knows is work, work, work.

His life seems to be running on autopilot.

The slightest nudge to either side will steer him away from the town and to the freshly plowed field – i.e. back to square one – or it will take him completely out of the picture.

The scene in the Ten of Wands card takes place on a theater stage, so you’re really looking at a psychological process, or an attitude.

The yellow floor on which he’s walking shows careful planning and routine. He can walk this path in his sleep.

Actually, he already looks half asleep.

As far as his career is concerned, he’s tremendously successful. The important question is whether or not he has a life outside of work.

Your fiery enthusiasm allows you to accomplish great things, but it can also consume you.

This is why Kabbalists call this card the Lord of Oppression.

Astrologically, it corresponds to Saturn in Sagittarius. It suggests hard work, discipline, and ambition.

But on the downside, it can also degenerate into selfishness and cruelty.

Think of Ebenezer Scrooge before the three ghosts set him straight. He’s a wildly successful businessman. But he has no compassion for anyone in the world – not even himself.

The Ten of Wands is a card of success in all things. While that’s all fine and dandy, when the Ten of Wands tarot card appears upright in a reading, it’s a reminder that there is more to life than work – and that success is not always about you.

If you’ve been wanting those overtime hours so you can buy that mega-screen plasma TV, start cancelling those volunteer activities you committed to. It’ll be quite some time before you can even think about coaching softball again.

The next few weeks will be blocked out with work, work, work and dreaming about your new toy.

Hopefully, the girls from the softball team will think that TV was worth it.

A creative venture is paying off big time. Maybe that online crafts store is getting more attention than you thought. Start filling those orders and remember to log the mileage on those trips to the post office. That may come in handy during tax time.

About those dishes that are piling up in your sink …

Meh, you can always switch to paper plates.

And with all those bites you’re getting on that dating website, why even bother thinking about settling down? Your love life is a huge smorgasbord.

Oh, you were supposed to visit grandma in the hospital today. She’ll understand.

But you can’t see her tonight, when you’re radiating sexy! You have a date with…uh…er…what’s-their-name.

Yes, things look wonderful on the surface. But that’s the dual nature of ambition and success – it’s pretty easy to lose sight of who you are.

The catch is that chasing after all the things that define material success can leave you feeling pretty empty inside.

You may think you are mastering your world. But as you can see from the man groaning under his heavy burden, the exact opposite may be true.

Burnout is the downside of success.

Remember that fire can be used for constructive as well as destructive purposes.

Your load isn’t any lighter than in the upright Ten of Wands card, and you’re feeling the burn. At this point, the saying “No pain, no gain” sounds pretty hollow to you.

You’ve taken on too many responsibilities, and you’ve long passed the point at which you can flash a defiant smile and tell people everything is okay.

Your position is making you vulnerable to those who don’t have your best interest in mind. They may approach you with shortcuts and easy fixes that are more likely to profit them than you.

It’s also doing less than wonderful things to your personality. As you try to find some meaning in all this, you may think that playing the martyr puts you in a morally superior position. The problem is that nobody likes a martyr!

The Ten of Wands tarot card’s astrological correspondence suggests iron discipline and a terrific work ethic. But on the downside, it also warns against self-righteousness and intolerance. People who don’t work 60-hour work weeks aren’t lazy.

They know their limits.

But if you take a step back and look at the bigger picture, the Ten of Wands tarot card will show you where you are spinning your wheels.

Did that get your attention?

Sometimes, it’s hard to say no to others when they approach you with a request that will only take “a few minutes” or your time – or cost you just “a couple bucks.”

Coworkers and children are good at that sort of stuff!

Know your limits and set boundaries.

Shedding unnecessary burdens will make your life a lot easier. Just make sure you don’t unload your responsibilities onto others.

The number 10 symbolizes the completion of one cycle and the beginning of another. Here, the energies of fire are completely unfolded in their creative as well as destructive aspects.

In traditional Numerology, the Number 10 reduces down to the Number 1. The 0 amplifies the energy of all Number 1 symbolism and meanings.


One thought on “Ten of Wands Tarot Card Meanings”