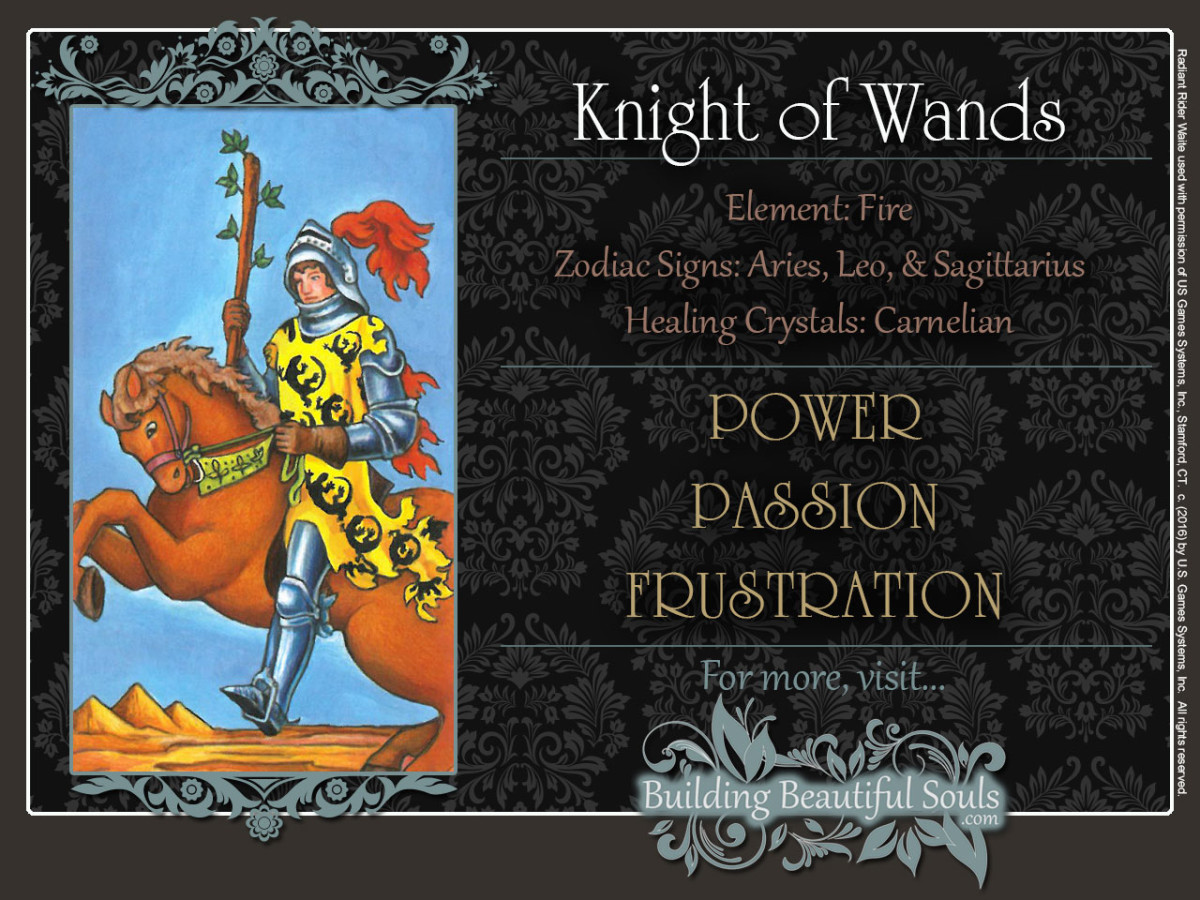 The Knight of Wands Tarot Table of Contents

Get your motor running!

The Knight of Wands is on fire as he charges across the vast desert plain.

Literally: Just look at the blazing plume of lion hair on his helmet and the flames shooting from the arm with which he holds his horse’s reins.

The Knight’s yellow tabard represents the intellectual prowess and swiftness of air. It is embroidered with salamanders, representing his fiery energy.

As the air aspect of fire, this card combines power and speed.

It fills you with vision and initiative, but also incredible amounts of energy and stick-to-itness.

This is a man on a mission.

In the Knight of Wands, the clear sky above shows clarity and understanding. The ground below is clear of obstacles. All systems are go!

The horse symbolizes his raw power. It is charging forward with the same force of will as that of the rider.

Astrologically, Cancer and Leo combine to fill the knight with vision and stamina.

It may even the spiritual vision of the Charioteer in the Major Arcana.

The three pyramids in the distance show that his quest could well be a spiritual one.

As the ruler of the animal kingdom, the influence of Leo is not only about power and determination.

A ruler must also inspire others. For this, he needs charisma.

Oh, and the Knight of Wands definitely radiates charisma!

While his armor protects him from the elements, it’s also quite a sight, shining brilliantly in the sun. The open visor reveals the knight’s face, whose purposeful expression is almost contagious.

This is someone who knows what he wants and who’ll go to any lengths to get it.

The short wand in his right hand expresses his vitality and creativity. No, it’s not much of a weapon, but as the open visor shows, this Knight is not on a mission of war.

When the Knight of Wands tarot card presents itself upright in a tarot reading, it’s a sign that the road is clear, you know exactly where you’re headed and you can trust your instincts implicitly.

Even better, you’re feeling energized. Everyone can see that you have what it takes to go the distance.

A problem that’s been puzzling you for some time is now making perfect sense. This new-found clarity is re-energizing you, giving you the proper motivation to accomplish your goals.

Maybe a sudden insight or event is encouraging you to make a life changing decision. New opportunities have come your way, or you’re seeing opportunities you didn’t see before. Anyway, it’s time to break away from the crowd.

As long as you’ve checked your roadmap and packed all the right things, you’re good to go.

And there’s no time to waste.

If you’ve had questions about your spiritual path, the pieces of the puzzle are coming together. Whether you can see the entire picture or not, it’s good enough to fully commit to your chosen path.

Besides, wouldn’t it be boring if there were no mysteries left for you to solve?

If the Knight of Wands card represents a person, this is someone who prefers action over thinking. Sometimes, this means that he is too impulsive for his own good.

On the other hand, he is becoming more in tune with his instincts – and they are getting better at leading him in the right direction.

The Knight of Wands is smart and bristling with creativity. He has a great sense of humor and a fun loving personality.

If you’re single and looking, you’ve definitely found your mojo! You know exactly what to say that will make that attractive someone else go head over heels for you.

Good for your karma, that you much too good-natured to gloat as you watch your competitors get friend-zoned.

If this is someone you’re interested in, there’s good news. The Knight of Wands is too straight forward to put on a dazzling show that will distract you from his dark side.

What you see is what you get.

The neck break speed at which the Knight of Wands rushes toward his goal can be exhilarating – as long as he’s headed in the right direction and there are no potholes in the road.

Quite often, it’s his own fault. The highly volatile mix of air and fire tends to make him restless and edgy.

Sometimes, he’ll blindly rush into things without bothering to think about the consequences. For example, in the heat of an argument, he may say or do things that could seriously jeopardize a friendship, relationship – or job.

If this is you, it’s better to say nothing at all until you’ve calmed down. Even if you’re right. “Sorry” may not be able to fix the mess you could create. If this is someone else, chances are he’s already regretting his actions.

The reversed Knight of Wands tarot card isn’t good at dealing with opposition or interruptions. They confuse him.

His single-mindedness allows him to do amazing things when everything is going as planned. But his brain can’t wrap itself around the idea that things don’t always do. Even minor complications can cause him to lose heart or lash out in anger.

He may even write a vindictive rant in his blog!

The Knight’s restless nature can also lead him to stir up trouble, just so he can prove himself to others –like a bored teenager.

If you can channel this energy constructively, you can inspire him to do great things. But if that doesn’t work, you may need to set firm boundaries.

He’s a frightening opponent when faced head on. But he’s usually so full of himself that it’s not all that hard to knock him off his horse.

All Knights are associated with the number 6. Kabbalistically, sixes correspond to the energizing and life giving qualities of the sun.

In traditional Numerology, 6 is associated with passionate Venus and the power of love. These energies combine in this card to express the motivation and endurance to accomplish great things.