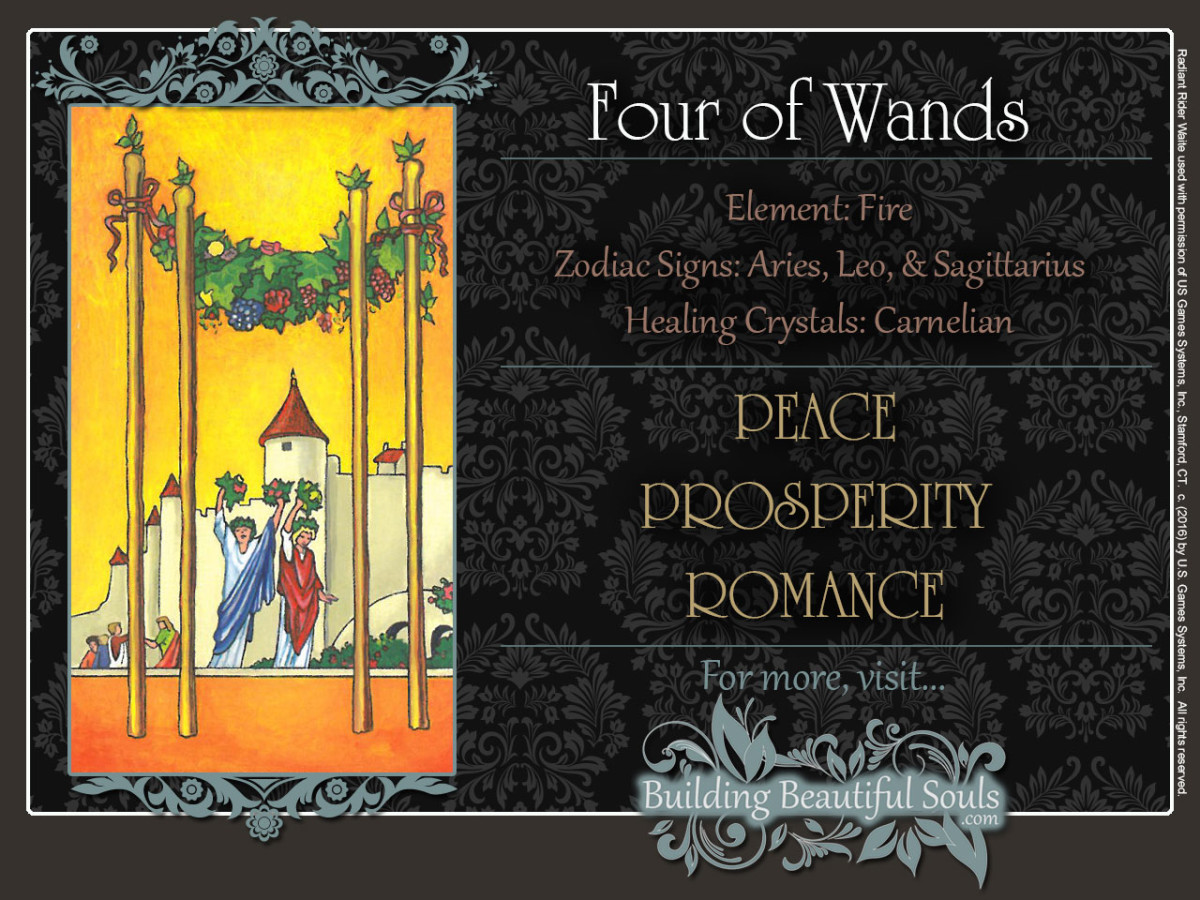 The Four of Wands Tarot Table of Contents

The universe is throwing a party – and you’re the guest of honor. Everyone, including you, knows how hard you’ve been working toward it. You’ve done a wonderful job!

After all, this is why Kabbalists call the Four of Wands tarot card the Lord of Perfected Work.

In an astrological chart, this combination suggests a passionate, but brief fling.

In the Tarot, however, it’s the spark kindling a fire that’s not likely to go out anytime soon.

Are those wedding bells you’re hearing in the distance?

The structure in the foreground of the Four of Wands tarot card does bear an uncanny resemblance to a chuppah, or wedding canopy. Its origin is in the Jewish religion, but wedding canopies are now quite popular in many faiths, from Christianity to Wicca.

Its roof is hung with roses, symbolizing passion and love, and grapes, signifying fertility and abundance.

Because the scene on the Four of Wands takes place on a theater stage, the wedding shown here may only be metaphorical. So if you’re not ready to settle down yet, you can let out that sigh of relief. At any rate, the Four of Wands expresses the joy and happiness that comes with a wedding ceremony.

The yellow sky and floor symbolize intellectual activity and planning, so what’s happening now is no surprise to you.

The castle in the background and the white bridge in the Four of Wands promise long term material security and personal growth, and that also includes a heightened spiritual awareness.

The castle in the Four of Wands can also symbolize a situation that has been holding you back. Note that the people are celebrating as they walk away from it. Here, it’s important to look at your situation and the Four of Wands tarot card’s position in a spread.

The couple waving the flower bouquets is dressed in red, blue, and white. These colors represent passion, faithfulness, and purity.

When you see the Four of Wands upright in a tarot reading, happiness and joy are right around the corner!

But that’s not really a surprise to you. You’ve been working hard at making it happen. The best part is that it’s unfolding exactly as you planned.

In a business situation, the Four of Wands tells you that a wise investment is paying off. Perhaps, an important career goal is now within your reach.

You have sown the seed, tended it with loving care, and gathered a rich harvest. Now it’s time to let your hair down and celebrate.

If the Four of Wands tarot card appears in a reading about love, get ready to change your relationship status on your social network page. Your days of being single are coming to an end. If you already are in a committed relationship, that ringing in your ears could well be the sound of wedding bells in your future!

The Four of Wands also marks a significant milestone in your personal development. Depending on what your emotional and spiritual needs are, you are about to enter a state of liberation or stability.

Note how the people in the Four of Wands card are outside the city in the background. They’re moving further and further from its walls. Instead of wasting away in some dark dungeon cell, waiting for a cosmic lightning bolt to set them free – like in the Major Arcana’s Tower – they simply opened the door and walked out.

Of course, they had some idea of where they were going. Otherwise, they could have easily wound up in the moat or worse, another prison cell.

But you’ve done your homework, knowing that the smart monkey always grabs hold of a new branch before he lets go of the old.

The Four of Wands card can also show that you’re arriving at a point of stability in your life. After wandering aimlessly for a while, you are finding the sense of direction you’ve been longing for. If you’ve been a “religious hopper,” for example, you may have found a faith that’s meeting your spiritual needs.

The joy brought by the Four of Wands tarot card is so powerful that the card’s meaning doesn’t change much when it is reversed. Any complications that may come from this reversal are minor, at best. They certainly won’t cheat you out of your well-deserved success.

Sometimes, the Four of Wands card announces a minor delay. It’s a bit like missing your connecting flight on a cross country trip. It is likely that the agent at the ticket counter can get you on the next flight.

It’s a great chance to stretch your legs. You’ll even have some time to grab a soda and visit a bathroom without having to worry about in-flight turbulence.

Perhaps, this moment of joy is already manifesting, but you’re too preoccupied with other things.

Stop worrying about whether the bridesmaid’s bouquets are matching their dresses.

Your father has lost 15 pounds to fit into that tuxedo, and he looks dashing. In five minutes, he’ll walk you down the aisle, and that’s when the best day of your life officially begins.

Do you appreciate all the good things with which life has blessed you? Okay, your neighbor just got a brand new car, and it’s bigger than yours. But yours is running just fine and it probably has better gas mileage, too.

There’s no need to be envious about your friend’s latest romantic conquest when you’ve been happily married for ten years. While he is sweating at the gym every day, your wife is dead serious when she tells you that your extra pounds only mean that there’s more to love.

Oh, and when was the last time one of his two week wonders told him he was a good man?

The Four of Wands tarot card, reversed, can also suggest that a joyful experience is temporary. But even if it’s only summer romance, it can still be beautiful.

Kabbalistically, fours are associated with Jupiter’s benevolence and generosity. In traditional Numerology 4 draws on the intuition and timelessness of Uranus. These energies join forces in the Suit of Wands to create memories you’ll cherish for the rest of your life.