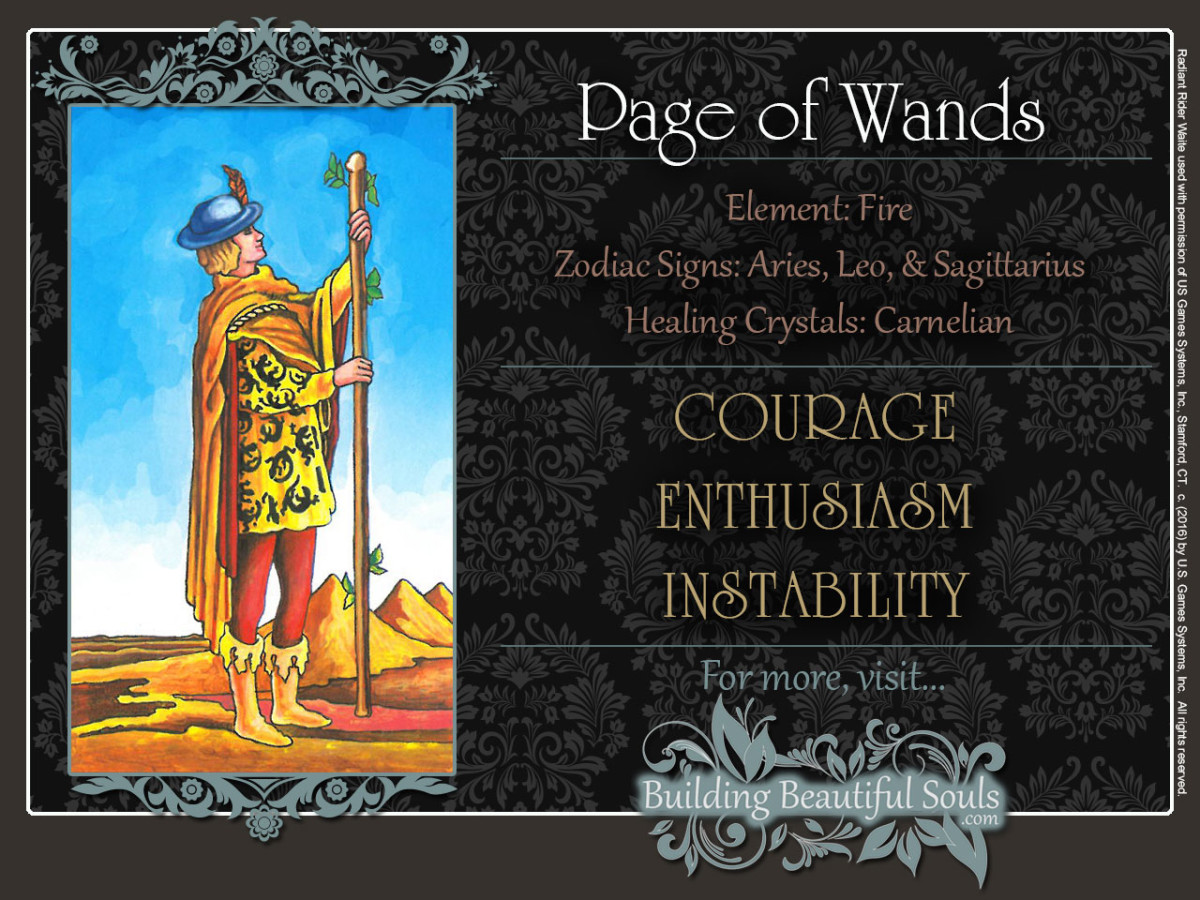 The Page of Wands Tarot Table of Contents

Having reviewed all the details in your mind and taken a deep breath, you’re standing at the threshold of something big. You’re about to take the first step.

With this cloudless, baby blue sky in the Page of Wands tarot card, no one’s going to rain on your parade.

Sure, the young man in the Page of Wands card will need to rely on his own wits in this vast, scorching desert. But he’s well equipped to handle the heat. Just look at his face.

He’s most certainly not sweating it.

Hats are symbols of protection. In older tarot decks, the Magician in the Major Arcana wears a hat, showing that the world can’t touch him.

This Page of Wands’ hat is grey, a color that symbolizes knowledge. The red feather above his third eye, is in the shape of the Hebrew letter Yud. It represents the divine spark.

His leggings are orange. That’s the life giving power of the sun. His boots, tunic, and cloak are yellow, the color of elemental air. In the Page of Wands tarot card, yellow represents his youthful, inquisitive mind. Yellow also signifies a quest for spiritual knowledge.

Will he find this knowledge inside the three pyramids in the background of the Page of Wands tarot card?

Pyramids are well-known symbols of spiritual mysteries. They’re found throughout many cultures across the globe. This group pf three refers to the Giza pyramids in Egypt.

Some believe that they’re associated with the three stars in the belt of the constellation Orion.

In Egyptian mythology, represents the slain and reborn god Osiris. Among the ancient Hebrews, it was called Kesil, meaning “fool” – sound familiar? The word was associated with hope and optimism which makes the Page of Wands card very similar in energy and symbolism to The Fool tarot card.

Gazing at his staff, the symbol of his power, the man in the Page of Wands is definitely hopeful.

The Salamanders on his tunic represent the element of fire. The Page of Wands is the earth aspect of fire.

***Note*** – The Page of Wands is not always a male. There are tarot decks which depict them as “princesses” or female. In a reading it will be up to the reader to determine what gender The Page represents.

The Page of Wands looks at the world with childlike enthusiasm and optimism. It often suggests new beginnings or looking at the world from a brand new perspective.

Maybe you’re about to make a fresh start in life. A newfound sense of optimism and vitality is telling you that you’re never too old for new beginnings.

For example, you may have put the hurts of a past relationship behind you. Now you feel you’re ready to start dating again.

The Page of Wands card brings good news, if you are getting ready to start a new project. It may be a workplace project or just a hobby. But it promises to be a lot of fun, and it will definitely stir those creative juices. You’ll pick up new skills and gain important insights.

Even better, the long-term outlook is promising.

The Page of Wands tarot card also suggests that you may embark on a quest for spiritual knowledge. Like a budding Robert Langdon, you may uncover hidden wisdom in everyday encounters. But cracking the Da Vinci Code is not necessary to discover that there is so much more to life than punching the time clock and Thursday night bowling.

If the Page of Wands card represents a person, this is someone who is young at heart and a lot of fun to be around. You’ll enjoy his (or her) free-spiritedness and quirky sense of humor.

Inquisitive and intuitive, he may seem a bit fidgety at times. His restless creativity is still searching for a proper outlet. He’ll find it eventually, but it may take some time.

For now, there’s too much to do and too many things to experience before he’ll decide on a path.

Others view him as immature. They may be right.

The Page of Wands tarot card may also suggest that someone has an important message for you. So it’s a good idea to keep your ears to the ground.

When reversed in a tarot reading, the Page of Wand’s childlike disposition can create feelings of confusion or discouragement when faced with obstacles and opposition.

Such feelings often crop up when you’re in unfamiliar territory.

Maybe you’re traveling in a foreign country, and you’re a little shy about venturing outside the popular tourist areas. There, people may not speak your language. Maybe you’re afraid the language barrier will create problems.

If you don’t have a good grasp on the local culture, you won’t know what’s good manners and what’s rude.

A friendly hand gesture that says “you’re all right” in this country may spark an act of road rage abroad.

Here, you are also encouraged to look at the way you handle criticism. Perhaps, you’re misinterpreting a well-meant suggestion that could help you do things more efficiently as a personal attack.

Give it a try.

If it works, you just got some free consulting. If it doesn’t, you can go back to the way you have always done things.

On the downside, the reversed Page of Wands may also point to an immature person with a simplistic way of looking at things. The Page’s youthful mind reduces everything to its most basic concepts.

Living in a moral universe of black and white, you may be ignoring the many shades of grey.

Sometimes, it also warns of irresponsibility.

In the Page’s mind, a thousand dollars is a lot of money. A child may pout when Mom won’t buy him that cool toy, because she has to pay for the rent, bills, and groceries first.

When the child grows up, he’ll understand.

But if the child grows older without growing up, he may blow his entire paycheck at the bar on payday. The reversed Page of Wands often symbolizes an immature and irresponsible soul who consistently relies on others to rescue him.

Even worse, he may never learn to express his emotions appropriately.

All Pages are associated with the number 10. One journey has been completed, and a new one is beginning. In the Page of Wands, this energy focuses on the creative aspect of fire.

In traditional Numerology, the Number 10 reduces down to the Number 1. The 0 amplifies the energy of all Number 1 symbolism and meanings.