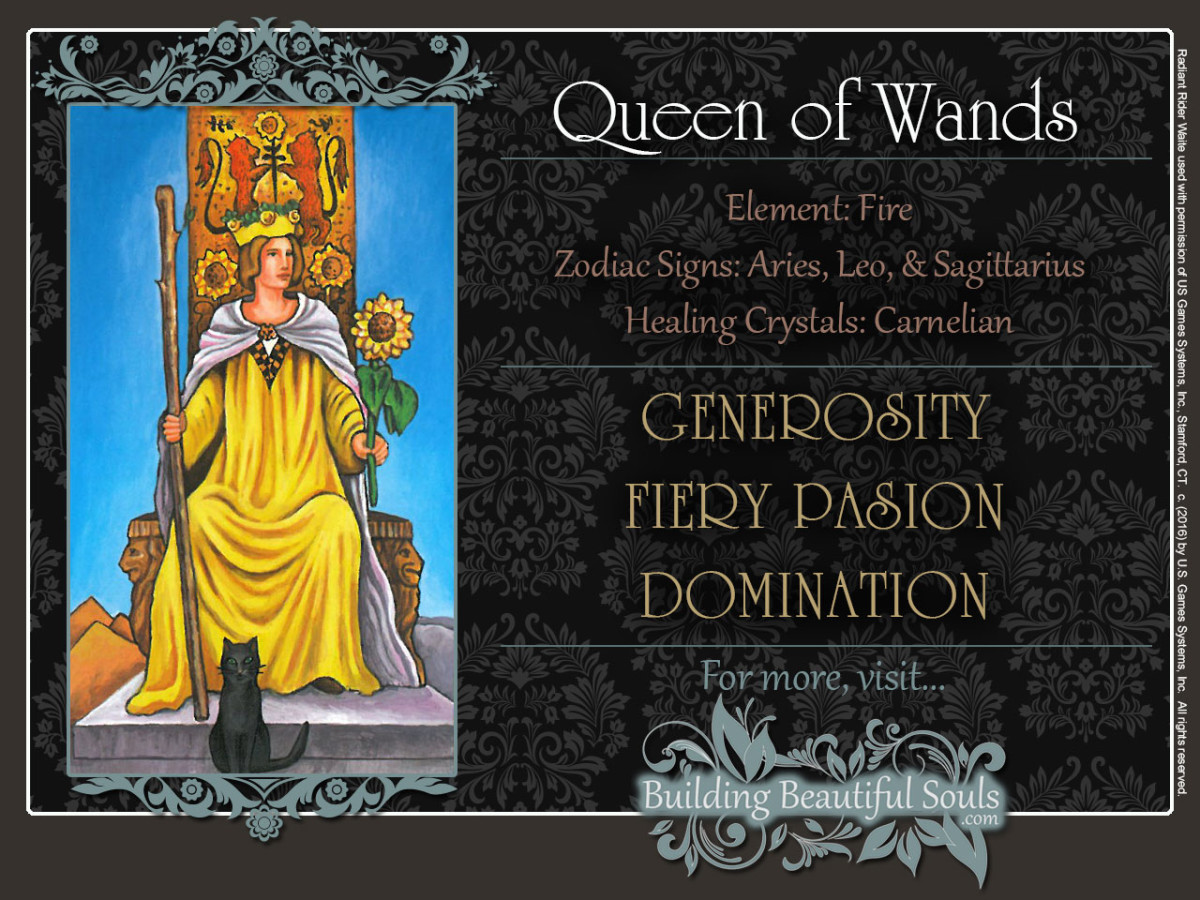 The Queen of Wands Tarot Table of Contents

The Queen of Wands has mastered the art of loving life.

Here, the visionary nature and limitless creativity of Pisces are the perfect match for Aries’ determination and need for self-expression.

The Queen of Wands tarot card is the water aspect of fire.

The receptive qualities of water allow the transformative energies of fire to be channeled to level of understanding and feeling.

The Queen has a natural gift for seeing the divine in everything she encounters. This is why she can turn just about anything into a work of art or a beautiful song.

The back of her throne on the Queen of Wands tarot card is orange, symbolizing prosperity and the life giving power of the sun.

The lions on the Queen of Wands signify divine fire, but also her sexual energy.

Sunflowers symbolize prosperity and health. The fact that the Queen is also holding one in her hand shows that she knows how to manifest her ideals in the material world.

In other words, she is not an idle dreamer. She uses her vision to bring abundance and beauty into her life.

Her yellow robe symbolizes spiritual and intellectual activity. The grey cloak ensures that her thoughts and inspiration are confined by her knowledge of the fundamental laws of the universe.

In fact, the Queen of Wands knows how to balance her high ideals, the yellow mountains on the left, against the demands of the physical world, the grey rocks on the right.

The symbolism of the black cat is complex in the Queen of Wands tarot card. On one hand, a cat is a house pet. So it suggests that the Queen of Wands is the ruler of the home. But it’s pretty hard to ignore its connection with deep mysteries and the occult.

The black cat may also show that despite her sunny disposition, this Queen is not afraid to show her claws.

The Queen’s ability to see beauty in everything allows her to create beauty everywhere. She is passionate in all she does, and her passion inspires others in turn.

Naturally extroverted, she has a rare talent for making friends everywhere she goes. She is never single for long.

If you can manage to win the Queen’s heart, you’ll quickly discover that she is a passionate lover and a lifelong friend.

The question is: Can you handle a strong woman who’s very comfortable with who she is?

Remember that being feminine isn’t necessarily the same as being ladylike. She knows exactly what she wants out of life. Like the other court cards in the Suit of Wands, she’ll pursue it in the most direct way possible.

No, she doesn’t beat around the bush. That’s why others sometimes think she’s too blunt.

In a relationship, she’s a fiercely loyal partner.

She has an unmatched talent for turning even the humblest abode into a palace fit for royalty. Financially, she runs a tight ship.

A natural leader, she quickly rises through the ranks in any organization.

In business, the Queen of Wands is tremendously successful. Guided by a strong sense of honor, she’s also extremely trustworthy.

A deeply spiritual person, it’s very likely that she has an interest in the esoteric. But no matter how far her head may be in the clouds, her feet are always planted on solid ground. She’s not one to get lost in the ether.

Instead, she finds ways to manifest her spirituality in ways that benefit her and others – in the here and now.

If you’re on her good side, you won’t find a more generous benefactor, loyal friend, and dedicated protector.

A word to the wise: Never cross her or threaten her loved ones! The Queen of Wands won’t hesitate to take you behind the proverbial woodshed.

And then you’ll find out exactly how much pain she can unleash with that big stick she holds in her hand.

When reversed, the Queen of Wands tarot card reminds you that you better wake up and smell the coffee, if your definition of feminine is “sugar, spice, and everything nice.”

These days nobody believes that women faint in the arms of their hero when there’s even the slightest hint of danger. History shows that stereotype was never really true to begin with.

The Roman legionnaires found out the hard way when they faced Boudicca, queen of the Celts, in battle.

In real life, the Queen of Wands tarot card shows a successful and well-respected woman who isn’t afraid to make tough decisions.

When reversed, it may show that you’re not comfortable having a woman as a supervisor – especially when she’s giving you a less than stellar performance review.

Sometimes, the Queen of Wands card represents a woman who has been ostracized because of her attitude toward sex.

Having multiple conquests is often a badge of honor among men. But there is still a double standard when it comes to women.

The reversed Queen of Wands tarot card can also represent a woman whose boundaries have been violated. Generally, she’s an easy going and generous person.

There are just some lines you should never, ever cross.

But she’ll give you fair warning up front. There’s no subtlety at the Court of Wands.
Antagonize her, and she’ll unleash a firestorm of destruction!

On the upside, if you’re part of the “Queen’s” inner circle and someone is threatening you, she’ll be the person to come to your aid.

Better step out of your way and close your eyes. You might not want to watch.

Her high energy can also make her prone to burnout. If this is the result of constantly having to assert herself, she may lose faith in her own abilities.

She may become withdrawn, bitter, and cynical over time.

Therefore it’s important to recharge your emotional batteries every once in a while.

When was the last time you took a vacation?

The Queens in the Tarot are associated with the Number 3. Kabbalistically, it corresponds to Jupiter’s charismatic and fun loving nature.

In traditional Numerology, 3 is associated with the creative and destructive qualities of Saturn. Here, these combined energies show a creative, sunny spirit – who can pack a wallop when pushed.