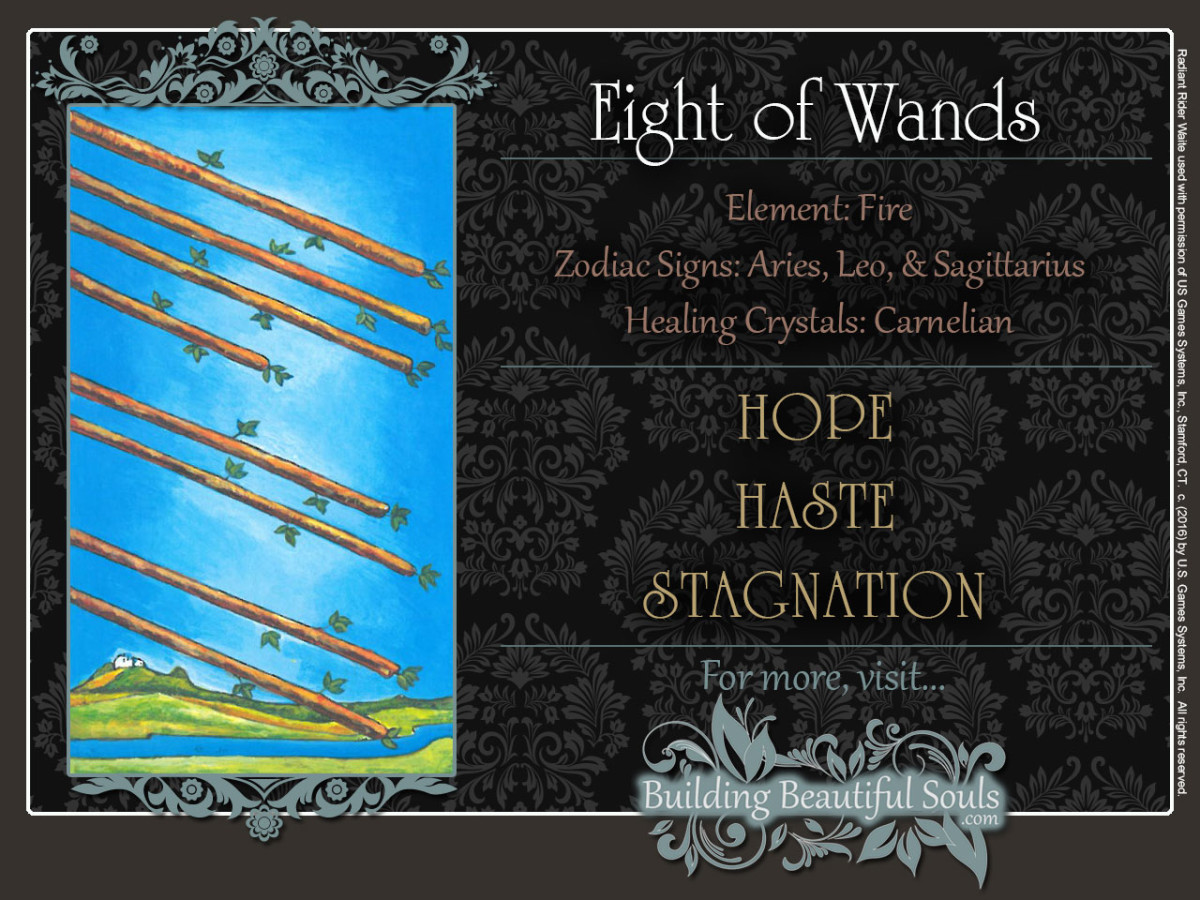 The Eight of Wands Tarot Table of Contents

A long journey is coming to an end.

You’ll arrive at your destination sooner than you think.

There’s been no stopping you on this journey.

Known by Kabbalists as the Lord of Swiftness, the Eight of Wand’s fiery energy is all about movement and speed.

As the staffs in this card soar across the sky like a volley of arrows, the focus here is really about being quicker at the draw. Aiming carefully is less important.

As the cloudless sky shows in the Eight of Wands, it’s clear sailing for these wands. But its blue color also suggests that their flight is guided by intuition – and hope – rather than careful planning.

Astrologically, the Eight of Wands card corresponds to Mercury in Sagittarius: aim high, hope for the best, and never mind the details.

The Eight of Wands tarot card expresses a terrific sense of optimism that’s fueled by lofty ideals. It also suggests a degree of disorganization.

From high up, the landscape below looks more perfect than it may really be. All you can see from here is the beautiful castle on the hill surrounded by green pastures that are irrigated by the beautiful river. These things symbolize success and prosperity.

But the distance also shows that you don’t know all the details.

For example, you have no idea who lives in that castle on the Eight of Wands. Maybe it’s the Queen of Hearts getting ready to chop the Knave’s head off for the umpteenth time.

The staffs’ downward motion and the fact that their upper ends are outside the image also indicates that you may be receiving spiritual communications. The Mercury/Sagittarius combination not only suggests high ideals, but also prophetic vision.

When you see the Eight of Wands in a reading, great distances are covered quickly and long journeys are coming to an end.

The Eight of Wands card may suggest that travel may be in your near future. It could be for business trip or that long overdue vacation.

Make sure that you grab enough sun block.

Mercury in Sagittarius is all about serious fun when it’s not busy solving the mysteries of the universe!

An important life goal is now in sight. An upright Eight of Wands tarot card is a sign that your focus is laser sharp right now and your energies can’t be contained! Nor should they be.

Your higher-self and the Universe are conspiring together (in a good way). They’re helping you achieve your biggest dreams so get ready to have success and check another item off your bucket list!

The Eight of Wands card announces rapid progress in all things. Just be careful not to overlook important details, if you’re in a rush to get things done.

If you are on a spiritual journey, pay close attention to sudden insights and. They could be messages from higher planes of existence. The card’s astrological correspondence often points to psychic visions.

A word to the wise: Take some time to process the messages you are receiving before you share them with others. New information is coming quickly and in large amounts.

Much of it is highly symbolic, and some is likely to be contradictory.

It will take a while to sort it all out.

When reversed, the Eight of Wands tarot card points out that a situation cannot progress because important issues still need to be resolved.

Maybe things just need a little more time, which means all that’s required of you is some patience. But there may be other reasons why they’re still up in the air.

The Eight of Wands’ shotgun approach, aiming in the general direction and hoping for the best, isn’t always the most effective way to get things done. It’s time to put on your detective’s hat and find out what’s really going on.

Are you making too many big decisions without having all the necessary information? Some details are not so minor, and jumping to conclusions can wreak havoc in all areas of your life.

Your relationship may be strained by constant arguing and jealousy. Here it’s important to keep things in perspective and remember to only sweat the big stuff. All too often, it’s constant resentment over trivial things that ends relationships that would otherwise have a tremendous potential for success.

Yes, he left the toilet seat up – again. Is it really the end of the world? If that’s your only complaint, you’re lucky.

Oh, she’s making you hold her purse while she is in the dressing room! That makes you look taken, not effeminate. She thinks you‘re a keeper, so you should stop whining.

Jealousy is a more serious problem, and it actually says more about you than your partner. Before you level accusations, make sure you have all the facts. Once you’ve voiced your suspicion, should you be wrong, repairing the damage will take a lot of time and hard work.

Perhaps you are bringing old baggage into your current relationship, or the two of you don’t have a clear understanding of what’s a deal breaker and what’s not.

Sometimes, the Eight of Wands tarot card suggests that you are stuck in thinking or behavior patterns that are holding you back.

If the same problem keeps cropping up in your life, even though you’re in a different relationship, at another job, or in a different part of the country, the only constant is you. The good news is that you are the best qualified person to make the necessary changes.

In a tarot reading focused on spiritual matters, the Eight of Wands reminds you to patient with those who don’t have your experience and understanding.

Remember that your wisdom must shine through in what you say and do.

Let everything you say come from a place of love.

Kabbalistically, eights are associated with Mercury’s swiftness. In traditional Numerology, 8 corresponds to Saturn, the creator/destroyer. In the Suit of Wands, these energies combine to show that powerful events are unfolding rapidly.