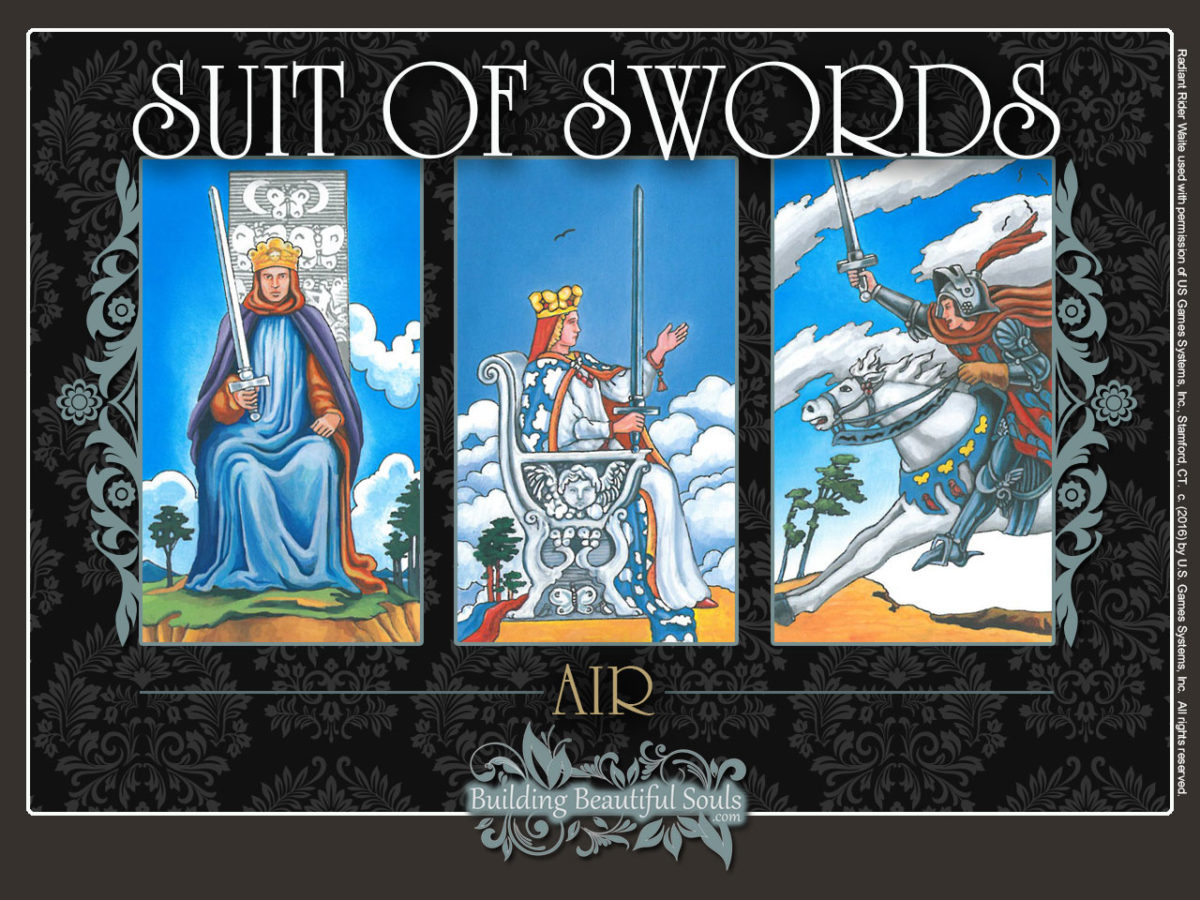 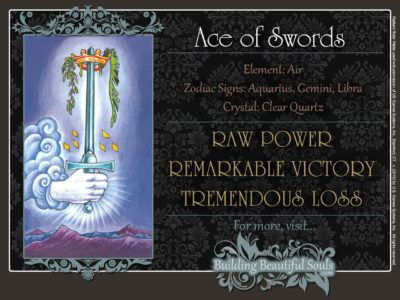 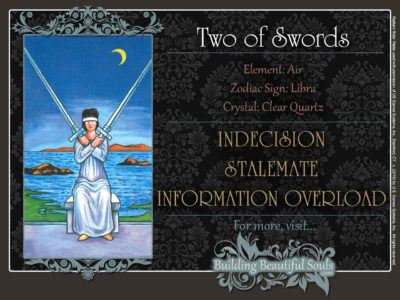 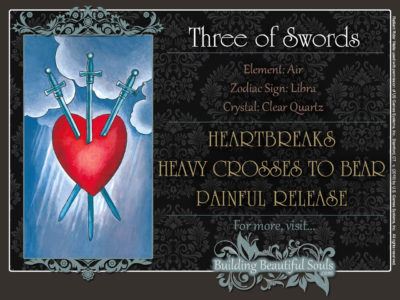 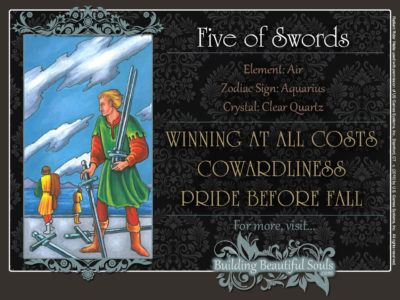 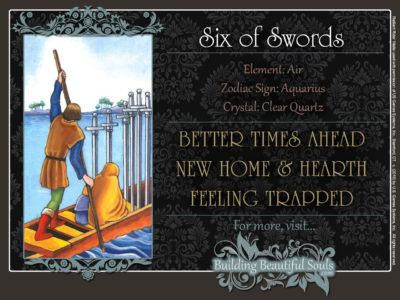 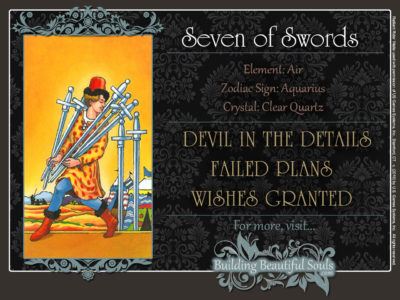 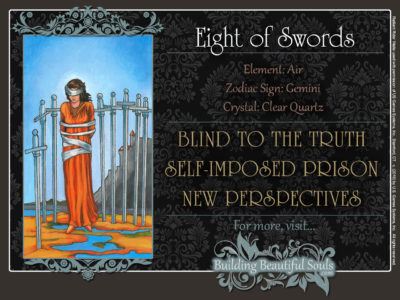 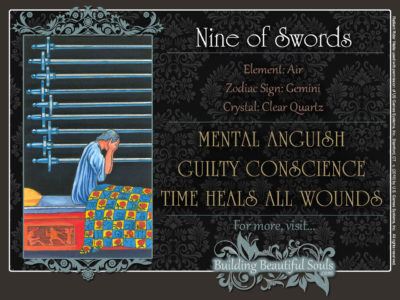 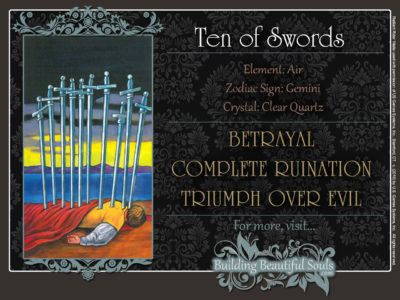 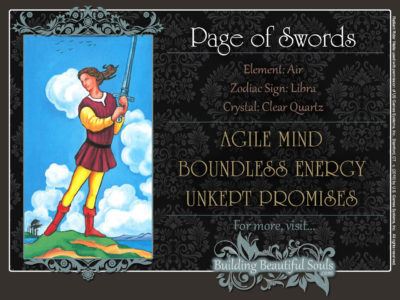 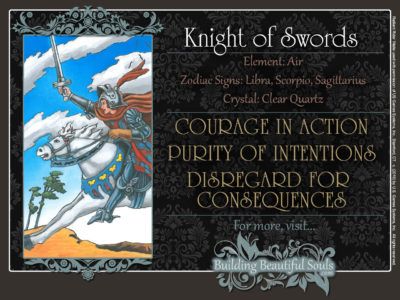 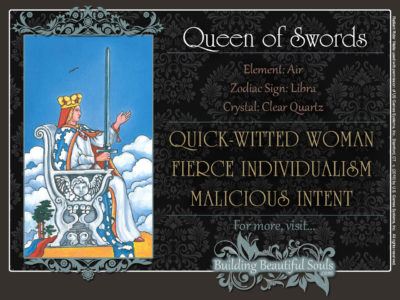 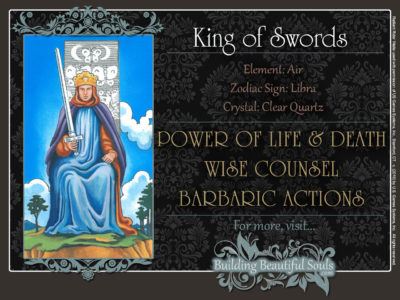 Okay, a lot of people look really worried when they see the Suit of Swords show up in a reading. But does this scary looking suit really deserve its bad reputation?

Well, that depends on how much you like to hang onto those pipe dreams and old hangups. Symbolizing pure intellect, Swords cut through all the fluff, nonsense, and wishful thinking. That’s not always a pleasant experience, but it’s usually a necessary one.

The journey through the Suit of Swords is a lot like a visit to the dentist.

But if you don’t go, the pain is only going to get much worse – and by the time the “d-word” has entered your mind, you know that it’s already pretty bad.

But he could drill!

Yep. He (or she) may even give you a shot in the gums and yank that tooth out. But the funny thing is, you’ll feel so much better when it’s all over. You know that, too.

In a nutshell, this journey requires courage!

Yes, Swords are weapons. They’re used to destroy. But that’s only one side of the story. The fact is that Swords in the Tarot have double-edged meanings. They’re concerned with dualities and discernment.

Swords are also used to consecrate, like when you’re dubbing a Knight. You can’t really knight someone with a fly swatter even though it spells doom for zillions of airborne critters everywhere, right? That would be silly.

It’s important to consider who’s using the sword and for what purpose.

A Sword will give a hero the power to accomplish great things, but a tyrant can create senseless destruction with it. And it’s not a toy. It must be kept away from children until they are strong and mature enough to use it effectively and wisely.

The Sword itself doesn’t care. In the end, it’s just a piece of razor sharp steel with a handle.

The Suit of Swords is associated with the Element of Air, the world of pure reason and intellect. It also corresponds to the Spades in a regular deck of playing cards.

The Suit of Swords form a bridge between Wands and Cups. They link inspiration with the emotional drive to manifest abstract ideas in the physical world.

Swords show you what’s possible and what’s not. More importantly, the Suit of Swords show you how you can put a great idea into action. But what you do with that idea – and whether you use it for good or bad – is not a Swords’ concern.

Swords are pure reason without emotion.

Suit of swords & The Zodiac Signs

Astrologically, the Suit of Swords is an interesting crew. In the Western Zodiac, Swords are associated with the Air Signs which are Gemini, Aquarius, and Libra.

Its tireless energy feels a lot like being around two Chihuahua puppies at the same time! If you love this breed, that can be a lot of fun. But Gemini’s curiosity can also take you into some very extreme territory. And that can be terrific or terrible.

Far ranging Aquarius is pretty good at catching up with Gemini’s bouncing all over the place – if he’s interested in where she’s going.

A visionary and dreamer, Aquarius is constantly on the lookout for new and unexplored territory. But he’s generally not all that concerned with boring stuff – like details – and there are times when others think he’s arrogant or just too far out there.

Aquarius can be your favorite Star Trek captain or Godot. It can be a long wait before he shows up.

Libra is a natural born reconciler and peacemaker. Carefully weighing all the pros and cons, she ensures that the scales are always balanced. This can be a pretty exhausting job – and there are times when the apple cart simply needs to be knocked over – especially when a couple of rotten apples are spoiling the rest of the bunch.

The challenge presented by the Suit of Swords is to balance thought and force.

It can blow in a fresh wind that’ll give you those new insights and information you needed to take action. It can also warn you that overreacting to a perceived threat will unleash a hurricane of destruction.

Suit of Swords in a Reading

Because Swords are associated with the Element of Air and intellect, they often point to logic and mental activity.

In a Tarot Reading, they will often give insight into thought processes and thinking errors.

The initiation by the Sword often feels painful, because it forces you to apply pure logic when tackling a problem – without letting your emotions come into play.

The Suit of Swords can help you better understand your own thought processes. Sometimes, they’ll show you how to resolve inner struggles. They encourage you to look at both sides of an issue, and they’ll give important information about the timing of your decisions.

They can tell you that you need to gather more information – or take some time to think things over –before rushing into action. On the other hand, Swords may point out that you need to be bold and resolute when you’re over-thinking a problem.

Swords often appear in a reading when you are in a conflict situation – or you’re headed for one. These conflicts may be intense intellectual or academic discussions, but they can also be physical confrontations.

Here, they advise you on the most effective course of action and the best way to apply force. They’ll also inform you when one of the parties involved is about to use his or her power in excessive or cruel ways.

People who are represented by Sword cards are often great visionaries who have many wonderful ideas. Highly intelligent, they’re also excellent communicators.

While they have grand plans aimed at the greater good, they often forget to add the human element into the equation. They often mistake weakness for defiance.

That’s because they’re not always in touch with their feelings. Consequently, they’re not too concerned with the feelings of others.

They can often be inconsiderate without meaning any harm. But if unchecked, their thoughtlessness can escalate into intolerance and cruelty.