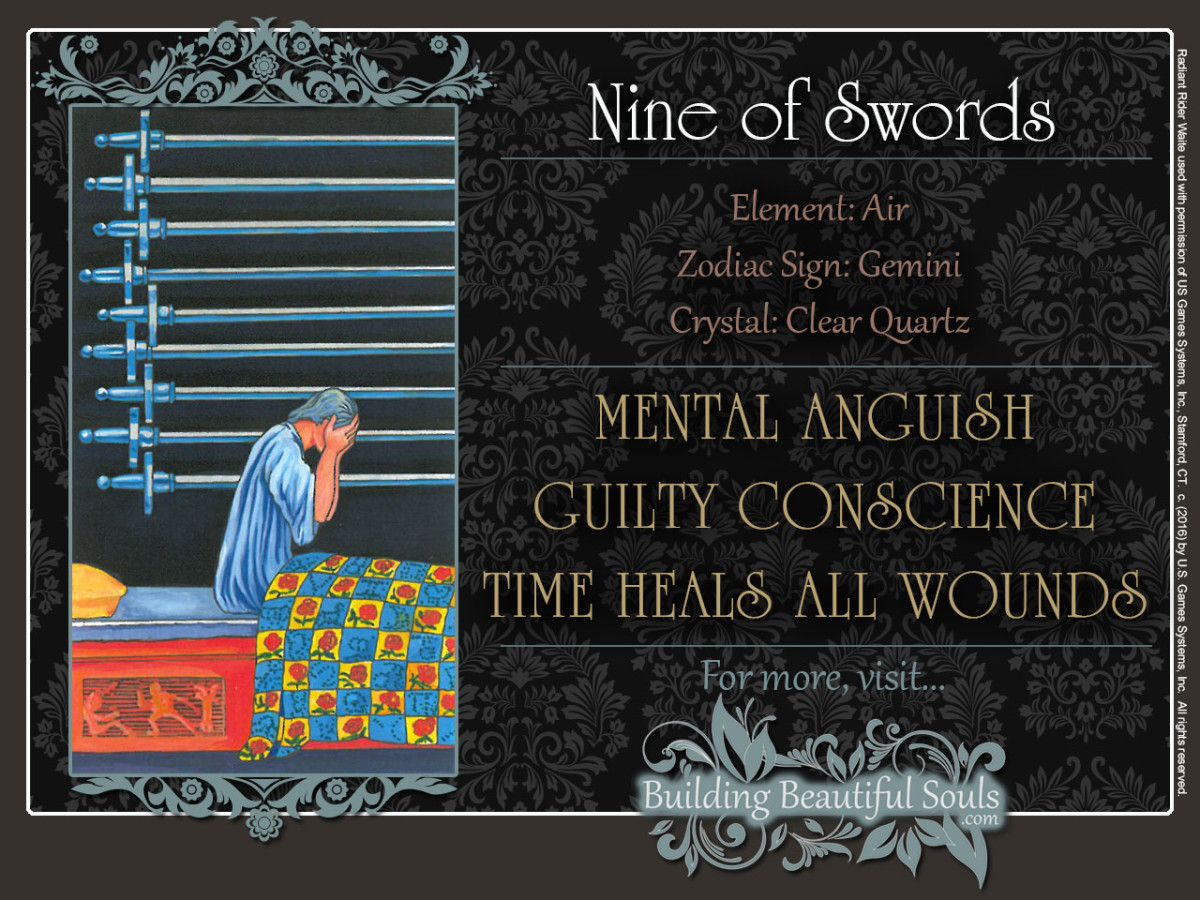 The Nine of Swords Tarot Table of Contents

Yes, on the surface, the Nine of Swords tarot card looks like one of those “bad news, let’s look for the silver lining cards.”

However, the Nine of Swords card challenges you not to look for silver linings but, rather, to find the deeper meaning of a painful situation.

The Nine of Swords card is actually all about mental anguish.

What’s confusing is that it’s not about an actual disaster.

The Nine of Swords’ Kabbalistic title is Lord of Despair and Cruelty. Gemini has sharpened these swords so well, they could slice through concrete like butter, and Mars isn’t taking prisoners today.

Erm, how is that not a disaster?

Because it’s a metaphor for an intellectual process.

Remember, the Suit of Swords is symbolic for thoughts. Your thoughts have gotten you here, and they will get you out of here, as well.

But you must see this process through to the end.

Note that in the Nine of Swords the swords are not touching the woman in this image. That’s the silver lining.

Three swords run past her heart, throat, and crown, in other words, her emotions, will, and spiritual understanding. The other six are above her head; if she is willing to work through this pain, she will regain her peace of mind.

The symbols on her bed in the Nine of Swords show that this restlessness is caused by her reflections about morals, ethics, and philosophy.

In the Nine of Swords tarot card, the carving on the bed shows a murder. The squares on the quilt balance passion (Roses) against reason (Yellow background).

The astrological symbols on the Blue squares represent questions about fundamental universal laws.

Buddhists use the Sanskrit word dukkhu (suffering, being dissatisfied) to express this state of mind.

The Nine of Swords is another tarot card symbolizing the “dark night of the soul”, in which the mind gives birth to the spirit. In a sense, the anguish you’re feeling are labor pains.

When the Nine of Swords tarot card appears in a reading, it points out that you can find ways to use your inner turmoil to help you grow as a person, perhaps even experience a spiritual awakening.

Whatever it is that’s keeping you up at night or giving you nightmares affects you only because you’re allowing it to do so.

Sometimes, this sadness only shows that you’re a caring and feeling person – or maybe even a true empath.

For example, you may be worrying about a loved one, who is going through a crisis. Or you’re grieving for a loss he or she has suffered. Don’t allow these feelings to make you sick. You’ll be of no use to your loved ones, if their pain is consuming you, too.

Help where you can without putting any undue hardship on yourself.

Your feelings don’t always lead you in the right direction. If you’re beset by a sense of impending disaster, a cool-headed look at the facts will show that things are actually much better than you think.

The Nine of Swords tarot card may also point out that your conscience is bothering you over something you may have done in the past. If it’s possible to make amends, you should not waste time.

But as a young man, he flew combat missions in World War I. He downed five enemy aircraft, which earned him the title “Ace” and the prestigious Military Cross.

It also weighed heavily on his conscience.

After the war, he visited the families of the pilots he’d killed and asked them for their forgiveness.

Sometimes, that’s the kind of effort needed to lift that ten-ton weight off your soul. But afterwards, you’re a much better and wiser person.

The Nine of Swords tarot card also refers to the pain that is often connected to spiritual growth. That’s why this experience is called the “dark night of the soul.”

Like all nights, it won’t last forever. The sun will rise eventually and chase away your confusion like morning fog.

Remember that swords are never at rest for long. When reversed, the Nine of Swords suggests that you may be too caught up in the moment to see that.

The Suit of Swords deals with the intellect. But sometimes even the brightest mind can be so overwhelmed with emotion that it can’t see the forest for the trees. Instead of rising above the turmoil, your thoughts are darting all over the place – at a speed that’s bound to wear out even the hardiest soul.

But your constant worrying will only make a bad situation worse.

So stop it already!

Chances are, you’ve been trying to avoid a problem that’s been bothering you for a while. The catch is that doing nothing won’t make it go away.

If something’s been making you frustrated and angry, you’ll have to bite the bullet and find a constructive way of making your feelings known.

No, it doesn’t have to get to the point where you’re throwing dishes. But swallowing your feelings will only hurt you in the end.

Over time, this sort of thing will turn into shame and depression. In the end, you’ll doubt yourself when you really need to rely on your strengths.

On the other hand, there may be some truth to doubts you’ve been harboring about others. They may not be on the level in their dealings with you.

Don’t jump to conclusions without hard evidence. If your suspicions are right, a little fact-checking will give you the information you need.

Another interpretation of the Nine of Swords tarot card suggests that your “dark night of the soul” is more productive than you thought. You are beginning to hear your higher power’s voice in this quiet solitude.

Understanding this experience for what it is, you are now feeling the first stirrings of faith.

Kabbalistically, nines are associated with the emotional force of the moon, whose currents are often overwhelming.

In traditional Numerology, 9 corresponds to Mars and here, his influence only intensifies this energy. Nines are also linked to the birthing process. This watershed will be followed by a spiritual awakening.