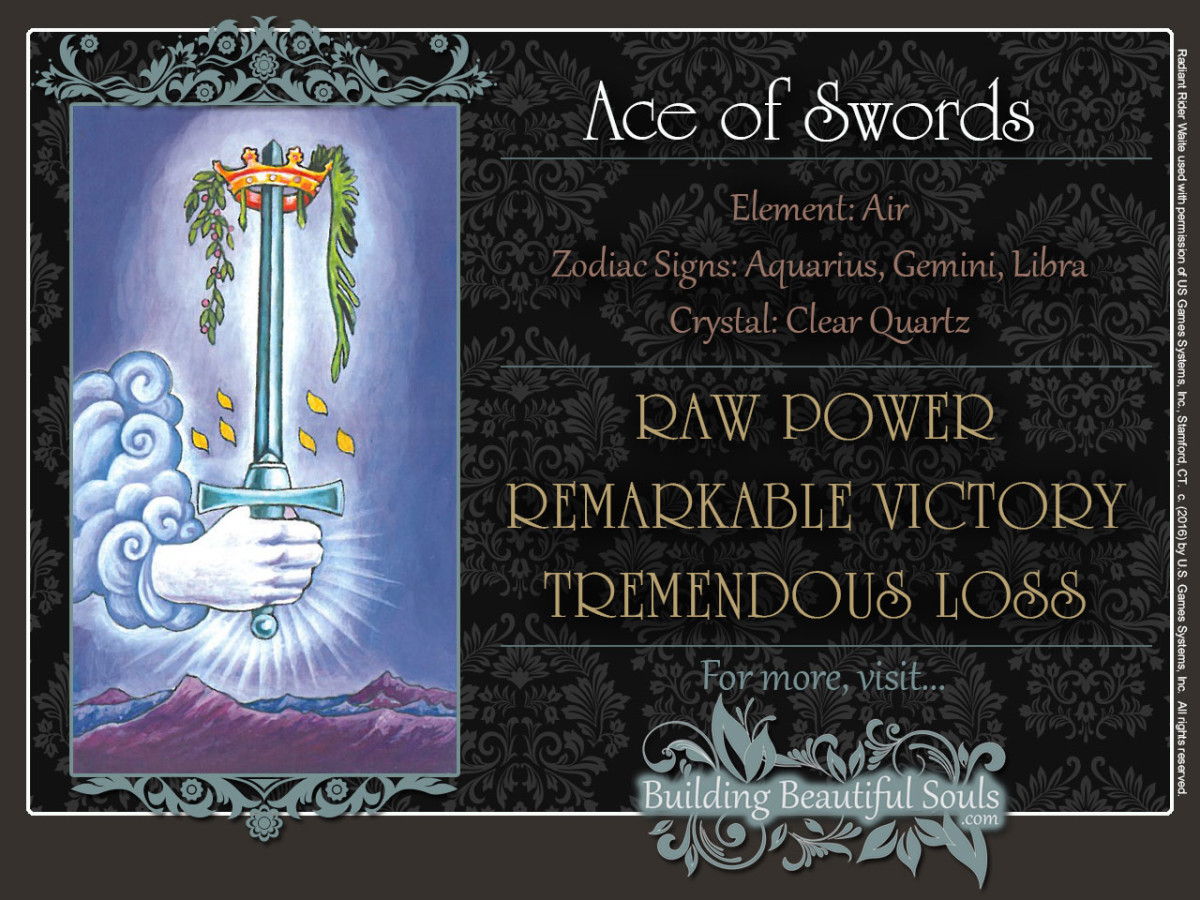 The Ace of Swords Tarot Table of Contents

The Ace of Swords tarot card is like a rocket right after it has been launched. A remarkable achievement, but whether or not that’s a good thing depends on the payload.

It may take a crew of explorers on a journey to explore new worlds. It can place a communications satellite into orbit, connecting billions of people with one another.

Or it could carry a nuclear warhead and cause immeasurable suffering.

Bottom line? The energetic power of The Ace of Swords should not be underestimated and it is the proverbial double edged sword.

In the Tarot, Swords are associated with the Element of Air and the powers of the intellect. Pure reason is neither good nor bad. Cutting through blind faith and superstition, it can clear the way to true spirituality.

But it can also be used to manipulate and deceive others.

In the same sense, a Sword can be used to fight tyranny or murder others in the name of an unjust cause. Like the human mind, it is a tool. How you use it is just as important as the quality of its steel and the sharpness of its edge.

Hey, wait a minute? How can something as boring as rational thought make you spiritual? Actually, there’s a whole branch of philosophy dedicated to just that problem. It’s called metaphysics.

The symbolism in the Ace of Swords card explains the concept beautifully.

A Grey, barren mountain range, the limits of what you know and think is possible, stretches out across the bottom portion of the Ace of Swords card. The Blue glaciers are dreams and hopes that have frozen in the harsh climate of physical reality.

Maybe you’ve resigned yourself into thinking that this is all there is to life. That’s when the divine hand presents you with a path to higher understanding. At the end of this path are peace, symbolized by the palm leaf, and success, the olive branch. The crown on the Ace of Swords represents spiritual understanding. The path itself is narrow and steep: it is the edge of the sword.

In a reading, the Ace of Swords card shows a major breakthrough or insight. The Ace of Swords also tells you that a major decision you are about to make may have life changing consequences.

Remember that swords are not toys.

An unsheathed sword will quickly change the tone of any conversation – just like in Shakespeare’s Romeo and Juliet, where it’s all fun and games until someone draws his blade.

Committing yourself to a spiritual life is very much like drawing a sword. Once you’ve made the decision to take the first step on your journey, there’s no going back. You must see it through to the end.

Swords are associated with intellect and reason: that’s your way of knowing and understanding the world. The first look behind the curtain changes everything. You can never see the world again as it was before – no matter how much you’d like to.

This means that the Ace of Swords is also a card of courage.

The Ace of Swords also points to important opportunities that are coming your way, perhaps in the form of sudden insights or inspirations.

Sometimes, the Ace of Swords tarot card warns of a potential conflict situation. But in that case, you will have the advantage. If you’re willing to take the initiative and act quickly, your efforts will be crowned with success.

You should always keep in mind that being a good winner is just as important as being a good loser. Once the fight is over, there’s no need for rubbing salt into your opponent’s wounds. Because whatever happens afterwards will draw at least as much attention as the knockout punch you delivered. It’s wise to make sure this attention is positive.

If you have recently experienced a setback, you’ll see the silver lining of your situation soon. As long as you’re alive, you are never truly defeated. The things you may have lost may have actually been holding you back, keeping you from living up to your true potential.

Now that these bonds are no longer holding you down, you can spread your wings and fly!

When the Ace of Sword tarot is reversed, it comes down hard. It won’t miss its mark. If it strikes for you and not at you, that’s good news.

In the best case scenario, a hard fight has ended quickly. Your foot planted firmly on your opponent’s back, you are now posing for those trophy photos.

But the Ace of Swords tarot card also warns that your sword has two edges, and both are razor sharp. So be careful how you use it. You could cut yourself.

For example, during a heated discussion or argument, you may get too fired up about proving that you’re right and the other person is wrong. Onlookers may end up siding with your opponent, just because you’re acting like a jerk.

Swords deal with rational understanding. When reversed, the Ace suggests that you may be confused about a particular issue. Gather more information and take some time to reflect before you make an important decision.

This is especially important, if you have received spiritual communications. They tend to be notoriously cryptic, and you should not take them literally – especially if the images are vivid or disturbing.

The Death card of the Major Arcana, for example, can be a frightening sight. Ask yourself how many times you’ve seen it appear in a reading. Okay. How many times have you actually died since then?

As with the Tarot, the images of your visions are symbolic. To understand their true meaning, you’ll need to learn how to interpret them correctly. Otherwise, you’ll become a victim of your own imagination.

Aces correspond to the Number 1. Kabbalistically, this number represents the divine spark.

In traditional numerology, it is associated with the light and radiance of the sun. Here, the combined energies communicate the essence of air and the sharp intellect attributed to the sword.