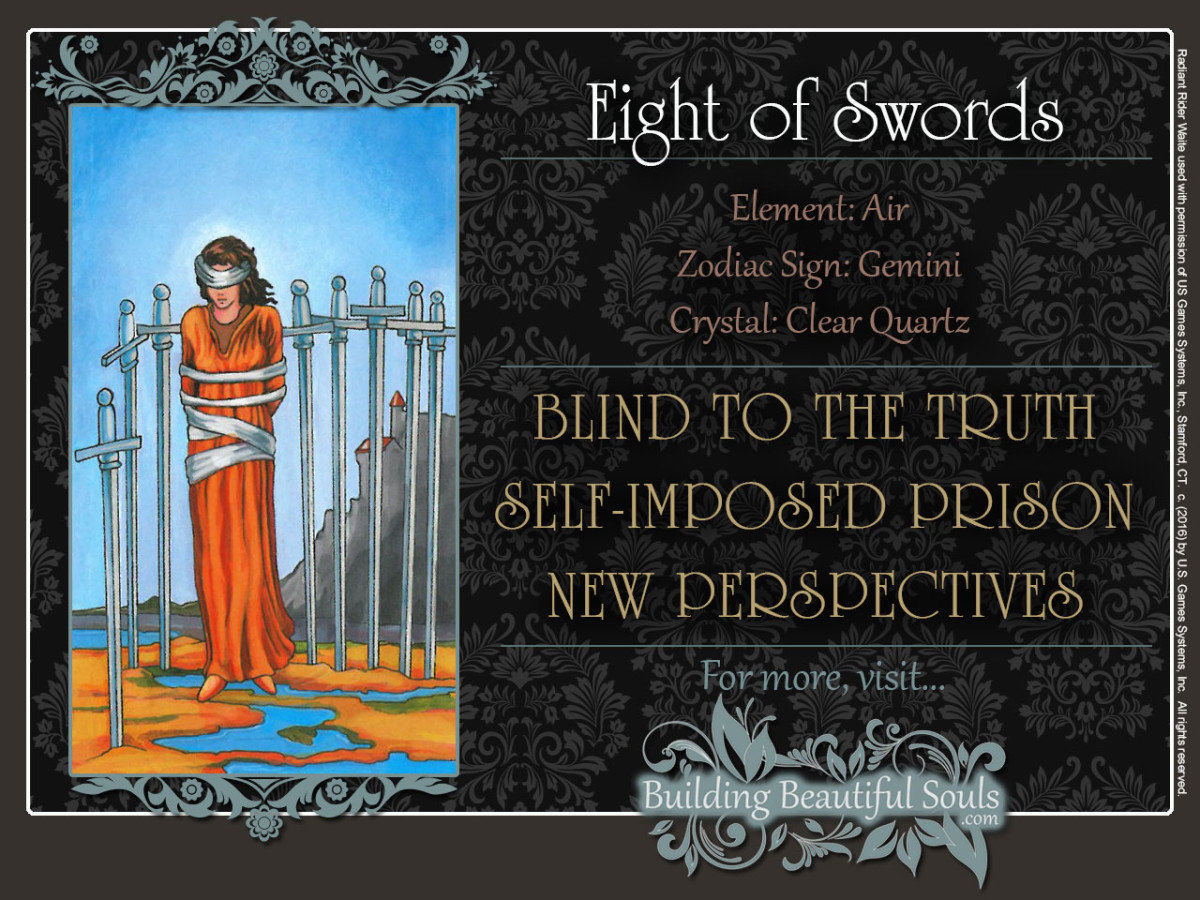 The Eight of Swords Tarot Table of Contents

In the Eight of Swords tarot card, too many unknowns seem to keep you from pursuing your dreams and goals.

But the real problem is that you’re unwilling to open your eyes and step out of your (dis)comfort zone.

Other people’s opinions of what’s possible and what’s not have defined what you do – and even what you think.

It’s been such a long time since you’ve left that tall, grey castle on the cold, grey mountain in the Eight of Swords where so many “etched in stone” truths were drilled into your head. That’s where your sense of reality was twisted so badly, that even the sky, your spiritual awareness, has turned grey.

That’s an awful lot of grey in the Eight of Swords, isn’t it?

The blindfold keeps you from seeing that the path before you is wide open. You can feel the wind in your hair and the wet mud below your feet.

Take one step, and you’ll be free.

But you’re not moving, at all!

Your thoughts, those swords in the ground, are already building you a new prison. In the Eight of Swords, the three swords on the left symbolize your past hurts. The five swords on the right are past disappointments.

The Red robe of the woman in the Eight of Swords shows that you’re not happy with this situation, at all. You want to go places, do things – and the mud below you reflects your sense of humiliation.

Kabbalists call the Eight of Swords tarot card the Lord of Shortened Force. Here, Jupiter cannot unfold his potential as Gemini plays unhappy “what if” games.

In a state of constant doubt, you’ve resigned yourself to your fate, no matter how miserable it’s making you.

Your hands are tied, literally. Still, they’re hanging pretty loosely. So why aren’t you shaking them off?

The good news is that the ties and blindfold are so loose, they’ll fall off on their own eventually.

And then it’s: Look out world, here you come!

When the Eight of Swords tarot card presents itself upright in a tarot reading, well, it’s time to be honest with yourself and face the “hard stuff”.

If you’re telling yourself that you can’t leave an oppressive situation because there are too many unknowns, you aren’t being completely honest with yourself.

The real reason is that you’re afraid, and fear has nothing to do with the unknown. Seriously, how many kids are afraid of Christmas presents?

Fear is your sense of powerlessness when confronted with something bigger than you. And your past hurts and disappointments have made you feel pretty small.

For example, people may have told you that everything is your fault so many times, you’ve actually started believing that nonsense – and it IS nonsense.

But since swords can never remain still for long, that kind of stinking thinking will sink into the mud eventually.

In a discussion or competitive situation – for example, when you’re interviewing for a job in a group – others may try to shut you down with scathing criticism. Don’t let them intimidate you into being quiet. Chances are, there’s nothing wrong with your ideas.

Your competitors are just trying to bully you out of the race. Rally your courage and give ‘em what for!

Sometimes, the Eight of Swords tarot card points out that you need to consider making healthy changes to your lifestyle. If you’ve been feeling off lately, visiting your licensed health practitioner may be a good idea.

In your spiritual development, the Eight of Swords has a different meaning.

Here, the Eight of Swords tarot warns you against relying too much on your intellect.

This has nothing to do with turning off your BS detector! Keep that switch in the ON position. There’s a huge difference between spirituality and superstition.

Your intellect builds the general framework of your spiritual awareness, but it can take only so far. As Shakespeare wrote, “There are more things in heaven and earth, Horatio, than are dreamt of in your philosophy.”

You’re awakening to the realization that there may be some truth to it.

Those blindfolds and ties are beginning to slip off, and your mind is opening to other modes of perceiving and understanding the world. It’s an initiation of sorts, but it’s not necessarily an actual ceremony.

There are many paths to initiation.

You can force yourself to stand still for only so long.

When reversed, the Eight of Swords shows that you’re getting restless.

It’s the kind of restlessness you feel when you’re stuck in freeway traffic on a sweltering August day. Your car hasn’t moved an inch in what seems like hours. Maybe you can make it to the next gas station by the time things start moving again.

But maybe it’s better to roll down the window, turn off the ignition, and get out of the car to stretch your legs.

That kind of restlessness.

Things haven’t gone anywhere for so long that you simply have to make a decision. Your fears and hangups have been holding your back. The urge to shake off your ties and remove that blindfold has become nearly irresistible.

Your liberation begins the moment that blindfold is gone. You are no longer trapped by what others say you can or can’t do. You can look at your situation with open eyes, suddenly realizing that those swords never blocked your way to begin with.

The Eight of Swords tarot card suggests that you’ve overcome a difficult challenge which has kept you from getting on with your life.

Suddenly, there’s an opportunity for the training necessary to get out of that dead-end job that has only kept you in debt. Or you have found the courage to leave an abusive relationship.

It doesn’t mean that things will always be easier from now on. As far as understanding your power and worth, you still have a lot of catching up to do. Your previous situation may have been oppressive, but it also provided you with a sense of stability.

That’s why you stayed in it for so long.

But if you’ve had the strength to leave it, you’re certainly strong enough to handle your newfound freedom.

Kabbalistically, eights are associated with Mercury and the power of the intellect. There are eight points on a cube, representing the sum of human understanding and experience.

In traditional Numerology, 8 corresponds to Saturn, here in his role of the Great Initiator, who’s come to tell you that you ain’t seen nothing yet!