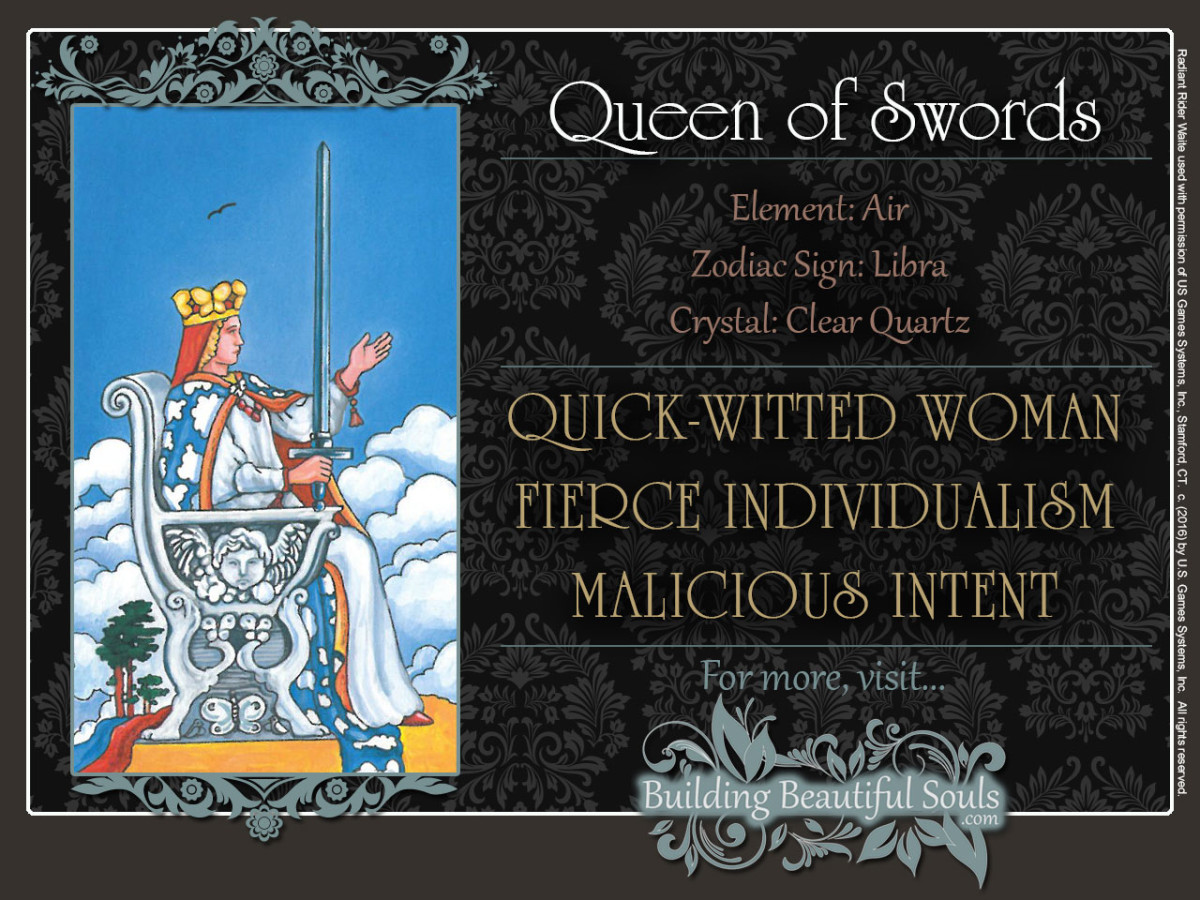 The Queen of Swords Tarot Table of Contents

The Queen of Swords is a survivor.

In her lifetime, the Queen of Swords has overcome many physical and emotional challenges by keeping a cool head. Often, this involved making painful sacrifices and letting go of childish fantasies.

As the water aspect of air, this Queen has learned to put her emotions aside, using her sword to cut fancy from fact.

The Queen of Swords’ head is crowned with butterflies, symbols of transformation. It reaches above the back of her throne, signifying her earthly position, and the receding storm clouds, the drama and clamor of the world.

The Queen is focused on what’s truly important, the clear blue sky above her in the Queen of Swords tarot card. The bird soaring in these heights represents spiritual purity and her ideals.

There is room for nothing else in her life.

From the Queen’s expression, you can tell she’s no one’s fool.

Extending her hand to the world, the Queen of Swords is letting you know that she hasn’t turned her back on it. On the other hand, she knows her worth. Anyone who dares pull the Queen into his personal drama or challenge her in any way, will feel the keen edge of her sword.

The Queen of Swords is not innately cruel but can be ruthless when the need arises.

Her white robe shows that her heart and spirit are pure. The red slippers on her feet point out that there’s a human being underneath her tough exterior.

But you’ll have to earn her trust to see her tender side.

Having risen above her painful past, she has not forgotten it. In the Queen of Swords tarot card, the string of beads around her wrist symbolize fears conquered. She wraps herself in her painful memories, the cloak with the cloudy sky.

As the cypress trees behind her show, she is no stranger to mourning.

Because cypresses are also associated with the fearful goddess Hecate, they also suggest that there’s a side to her you really don’t want to know.

No. We mean really don’t.

Fiercely individualistic, the Queen of Swords has a sharp eye and an even sharper mind.

You can’t fool her, so don’t even try.

If the Queen of Swords is not college educated, she definitely has a graduate degree from Hard Knocks University. Remember the Suit of Swords is about the generation of ideas and mental analysis so this Queen can run intellectual circles around the best of them.

If that’s not enough warning, you’re about to find out that women with swords aren’t so sexy when you have to answer to them!

In general, the Queen of Swords is a woman who appears stand-offish, because she does not like to wear her emotions on her sleeve.

After all, it’s men who are supposed to be stoic, distant, and strong.

A true warrior woman like Joan of Arc must obviously be a witch!

If the Queen of Swords tarot card represents you, chances are you’re in a pretty lonely spot. Others may feel threatened by your keen eye for detail that doesn’t miss a thing.

They may resent your critical intellect which accepts no excuses and cuts right to the chase.

But be honest with yourself.

Don’t you think you’re a bit intimidating at times?

Empathy is not a sign of weakness, it’s a type of understanding. Knowing this will make it easier for you to connect with others.

Courtesy isn’t always phony, it’s a way of showing respect. Give some to others, and they will respect you as well.

On the other hand, the Queen of Swords tarot card can also suggest that you’ve become too emotionally involved with a problematic situation. In this case, a level headed “just the facts” approach will be best.

Keep in mind that tempers can flare in the Court of Swords.

The Queen of Swords also represents someone who has suffered a personal loss. Perhaps a loved one has died, or she is going through a divorce. She bears her pain with grace and dignity.

In fact those around her find inspiration in the way she’s handling herself.

Working through her pain, the Queen of Swords is becoming wiser and stronger.

And she will heal.

While you can become wiser and stronger as you rise above your hardships, there really aren’t many useful things that you can learn from pain itself.

Pain teaches you too many wrong things about power and justice. It doesn’t do much to build you up, and it can easily break you.

When the Queen of Swords is reversed in a tarot reading, it’s very possible that someone’s actions and thoughts are based on pain.

Think of the last time you had one of those pounding migraine headaches. It turns a comforting hug into an unwanted intrusion into your personal space and your favorite song into a grotesque cacophony.

Oh, and forget about the birds chirping and the sun sending happy rays of light into the world.

Psychological pain is just as real.

What’s worse, it doesn’t go away after a day or so.

Reacting to prolonged pain and stress, a powerful mind often becomes vindictive, arrogant, and bitter. Withdrawing into its shell, the soul refuses to grow.

Here, a strong commitment and hard work are required to change the course. A gratitude list is a good start. Pain can shrink your whole world down to what’s wrong in your life, so it’s important to focus on the many things that are right.

On the other hand, the reversed Queen of Swords tarot card can also point to someone who is just power tripping. In a discussion, this person won’t let you forget how many initials he has behind his name or how many books she has read – or written – on the topic.

When there’s nothing substantial at stake, that’s only annoying.

But when such a person is placed in a leadership position, his bossy attitude or her blind focus on numbers instead of people can do serious harm to the overall organization.

In a business, any gains he or she will make by continuously upping the sales target will be likely undone by the costs created from high employee turnover.

In the Tarot, queens are associated with the number 3. Kabbalistically, it represents Saturn, the creator/destroyer as well as the “dark mother.”

In traditional Numerology, 3 refers to the wisdom of Jupiter. Here, these energies combine to show spiritual knowledge gained from painful lessons.