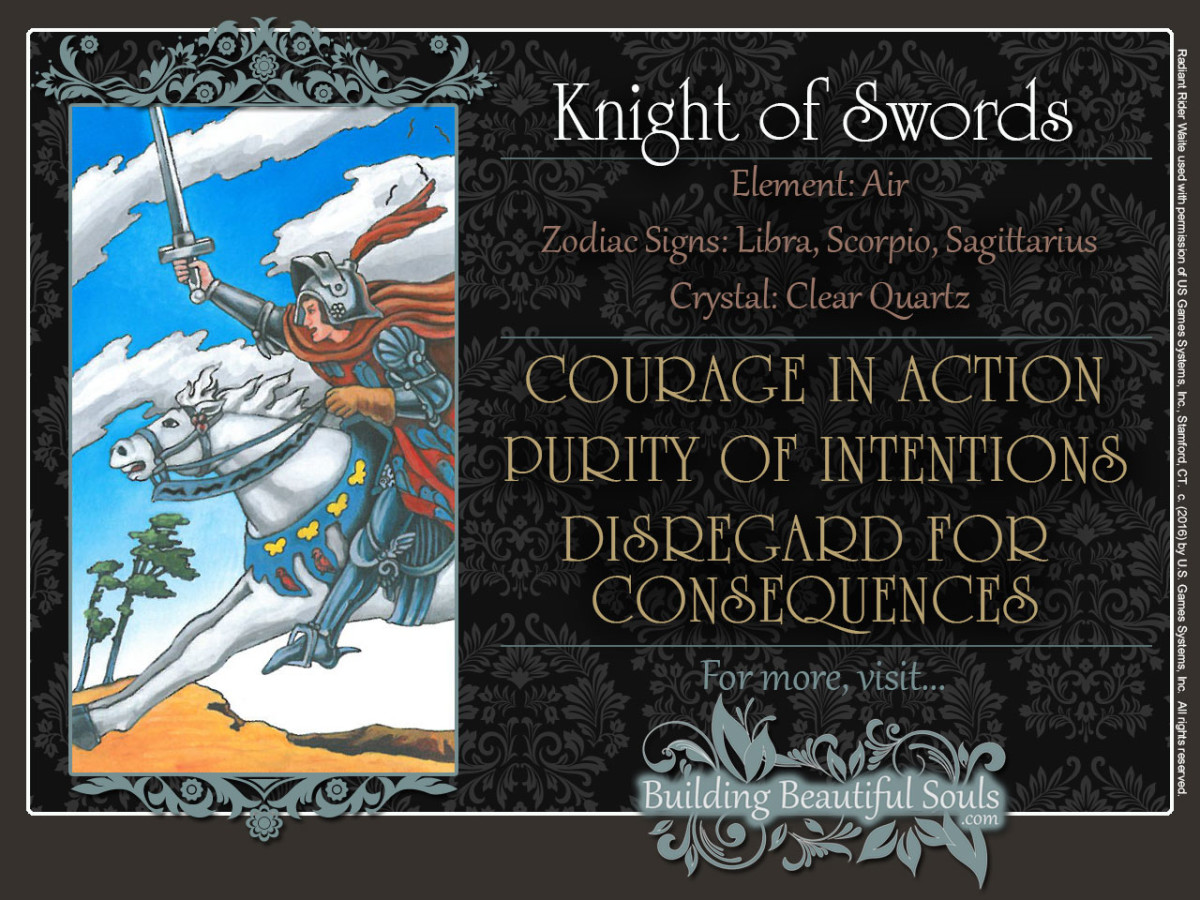 The Knight of Swords Tarot Table of Contents

Start practicing your best air guitar move. The Knight of Swords tarot card has come to “rock you like a hurricane!”

Who cares that nobody listens to hairbands anymore – except in Europe? You’re in a hairband kind of mood, and you don’t care who is watching.

Just let them try to stop you!

Capricorn charges ahead at full speed to the sound of an over caffeinated Aquarius blasting at max volume!

It doesn’t matter how hard the wind is blowing against this fierce rider. The Knight of Swords tarot is the air aspect of air. He can blow harder and faster than any storm.

Good for everyone that the Knight of Swords’ heart is pure, as his white horse shows.

The Knight’s sword held high, he seems to practically fly across this endless desert. The Knight of Swords is not in the mood for taking prisoners. This is someone who’ll go to any length and endure any hardship to get what he wants.

You can’t see the tip of his sword on the Knight of Swords tarot card. When the Knight strikes, his foes won’t know what hit them. But they will see his face. His visor is up because he wants them to know exactly who’s putting an end to their shenanigans.

Okay, he’s a big show-off! Why else would he put butterflies on his horse and wear a big, red super hero cape into battle? But the color of his cape also symbolizes his passion and limitless energy.

His helmet’s feather plume is red in the Knight of Swords card, too, here representing swiftness.

The feathers symbolize his dreams and goals. So do the birds on his tabard and his horse’s reins in the Knight of Swords tarot card.

See those birds in the sky?

They represent the theoretical aspect of the Knight’s ambitions. The fact that the Knight of Swords is also wearing them means that he’s not just wistfully sighing after them.

The Knight of Swords is pursuing them with unrivaled speed and focus!

The Knight of Swords isn’t always “by the book,” but he does live by a code that’s not very flexible.

His goals and values are clearly defined, and he’ll stop at nothing to pursue them. This means he’s willing to charge straight through some ethical grey areas on occasion.

But as long as everything turns out well, the end justifies the means.

At least to him.

When the Knight of Swords card presents itself upright in a tarot reading, it’s a sign that you’re bursting full with grand ideas, amazing thoughts, and marvelous plans! Once you’ve set your heart on something, there’s no stopping you – or changing your mind.

In your relationships with others, you’re a lifelong friend or a sworn enemy. There’s really no middle ground.

You have a well-educated mind and a pure heart. In your head, you’ve worked out all the great problems of justice, philosophy, and religion. Even better, you’re doing a darn good job of living by your principles.

No one can call you a hypocrite.

Or a coward. You’re not someone who’ll back away from a fight, especially if it’s for a higher cause.

On the downside, a pure heart isn’t always a big heart. When you’re right, you’re right. That’s all that matters to you.

When it comes to discussions and arguments, you’ll take the high road first. Unfortunately, your fuse isn’t always as long as it should be.

And when diplomacy fails, all bets are off!

That’s when your famous clear, direct way of communication can actually become pretty intimidating. In your mind, everyone’s had fair warning.

The only problem is that you’ve now reached a point where you are no longer too concerned about “collateral damage.” You don’t think it’s your problem, if others don’t stay out of your way – even if they were just trying to mediate or point out to you that you’ve gone too far.

That can hurt you more that the threat you think your opponent posed.

Because now you’re acting like a bully, and nobody likes a bully.

Keep in mind that sometimes, being kind is better than being right.

An honorable Knight knows how to strike true. But he must also know when to show mercy.

When reversed, the Knight of Swords tarot card points out that your intense drive is lacking focus – or that you need to pull the brakes.

In the Knight of Swords tarot card, the energy is very much like the fate of the unfortunate 600 horse cavalry in Tennyson’s poem “The Charge of the Light Brigade.”

A communications mix up at the highest level caused these brave souls to charge straight into a devastating artillery barrage as they took musket fire from both flanks.

The difference here that you can’t blame anyone except yourself for your rashness!

That’s what the Knight of Swords tarot card is warning you against.

Take a deep breath. Count to ten. Sleep on it. Do whatever it takes to get yourself into a calmer state of mind.

Once you set things in motion, there’s no turning back – and then you’ll have to live with the consequences.

Sometimes, the Knight of Swords card suggests that you need to give others credit for their contributions to a group project.

It doesn’t matter how crucial your efforts were; they were part of a team effort. If you ignore this, your partners are likely to think you’re arrogant.

They’ll think twice before they include you in a similar future project.

If you’ve experienced a recent setback, you will recover beautifully. Yes, you’ll be sore for a while, but this is the good pain.

Besides, your training has more than adequately prepared you for taking a spill like this.

You already know that you have learned something important from this experience. This knowledge will make you stronger and better equipped for future challenges.

Another interpretation suggests that the reversed Knight of Swords tarot card shows someone who’s rough around the edges, but otherwise brilliant.

If you give him a chance to prove his worth, he’ll bring ideas to the table that will benefit you greatly!

The Knights are associated with the number 6. Kabbalistically, it refers to the sun and its fiery energy.

This explains the Knight of Swords’ sometimes explosive temper.