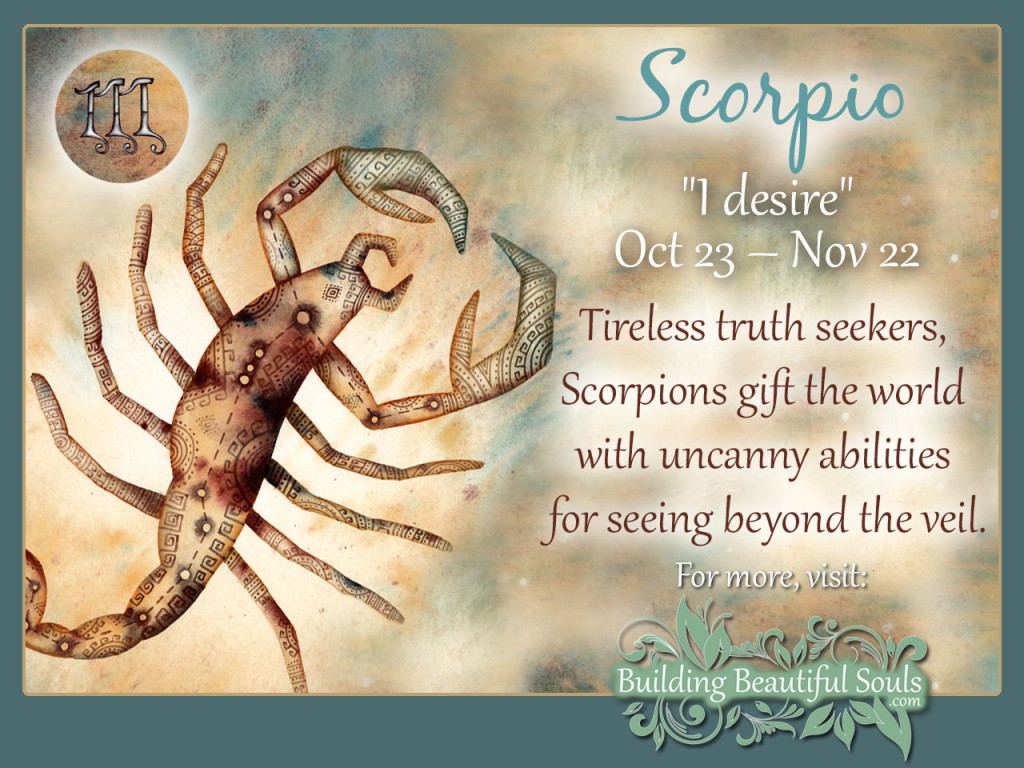 When folks describe Scorpio traits and personality, the words ‘mysterious’, ‘deadly’ and ‘highly sexual’ are inevitably tossed in the content somewhere.

What is truly mysterious to a Scorpio is how star sign scribes often fail to reveal the heart of the matter.

So, allow us to expose the secret core of that which is the Scorpio sign…

A Scorpio’s every thought, every word and every deed is tied with Golden Threads to the pursuit and capture of love.

It doesn’t matter the form but giving and receiving love at it’s purest, highest and most divine vibration is the only thing that gets a Scorpio out of the proverbial bed in the morning…

Oh, and BTW, Scorpios have a propensity for turning the macabre into a yuk yuk with one flick of their stinger.

Scorpios are creatures of evolution – ever changing and growing as they mature.

There is no question the Scorpio personality has a dangerous side, but only people arrogant enough to think they can cross them without consequences have anything to fear from that sting.

Those a Scorpio loves barely even notice the potential risk, besides all that mystery is hard, if not impossible to resist.

Scorpios are incredibly strong people, not in the physical sense – rather they have a core made of steel. This is why they confront difficult situations and leave people reeling.

Do not get between a Scorpio and their current quest.

Really. We mean it!

Remember that the Scorpion is ruled by Pluto with all its magic and power. Pluto also gives Scorpios a profound 2nd sense – they know when they’re being played and when you’re keeping it real.

We might have forgotten to mention one little thing…

Like their twin soul Pisces, Scorpios give a whole new meaning to the word ‘psychic’.

The ever-alluring Scorpio has a very resilient look about them. They tend to have well-defined features and shoulders that defy Atlas in terms of their ability to carry problems. Two of the most sensuous areas are the Scorpio lips and neckline. They have average heights but still manage to shine in a crowd.

Scorpios like to dress well, but not necessarily to grab attention (remember that secretive nature). They have a good immune system but may experience various accidents because they take risks particularly in their youth. It’s important to be diligent with all reproductive organs (get those checkups and practice safe sex).

In terms of eating, the Scorpio likes good food and they need it for energy. It’s rare that you find a Vegan in this lot who could well live the saying “protein is us”. Once they hit midlife, many born under this star sign put on weight but they wear it well.

Scorpio Symbol and Its Meaning

Every spring when Orion sets, Scorpio rises as a reminder of its poisonous bite.

Sailors considered this sign of the Zodiac as a negative Omen. Egyptians recognized this pattern as a sacred serpent, and alchemists felt that the time of Scorpio (fall and winter) were the best time for their golden endeavors.

The Greek story goes that Orion went to Crete on a hunting expedition with Artemis. He brazenly said he would kill every creature, making Gaia down-right pissed.

She sent the Scorpion to sting him for his conceit. Artemis, Leto and Zeus intervened to have Orion put in the sky but not without the Scorpion as a constant reminder that you don’t mess with Mother Nature.

Scorpio Compatibility, In Love & In Bed

Elementally the sign of Scorpio falls with water, meaning there’s a wide array of emotions at work.

The thing is that Scorpio can hide them so tidily and look absolutely collected from the outside. This makes people even more curious. Add that to charm and wit, and it’s easy to see why this Star Sign attracts a variety of followers.

In bed, well, there’s a reason that Scorpios are famous lovers. We will leave the rest to your imagination.
But what we will reveal is that even a passing roll in the hay with a Scorpio is something you’ll remember the rest of your life – over and over and over again.

Yes, the Scorpion has a huge sexual appetite but that doesn’t mean all their relationships are all physical.

This Astrological sign loves with every cell in their body. Think of any movie wherein the hero or heroine dies for any of love’s causes and you’ll understand just how deeply a Scorpio loves.

Zodiac Signs that make compatible partners for Scorpio are:

Having a Scorpio Child is a bit like having a beautiful onion with layers and layers… and yet more layers. Plus, she’s likely to cause others to shed a tear or two… or a hundred.

There is so much going on inside the Scorpio Girl that others are never allowed a glimpse of. It is simply (as the saying goes) “a Scorpio thing.”

These children have amazing control over their emotions, and an intensity that makes you feel like you’re seeing an adult in a child’s body. They have passion, intense insights, a great need for security and the ability to bounce back from nearly anything.

The Scorpio Girl is very profound and intense. She has an innate beauty and unique personality that truly sets her apart from others.

Get used to her wanting privacy. There are some things that this girl divulges to only a special few (if at all). People who poke holes in her aura of mystery get poked back. Your daughter will always want you to clarify your position and you may find some power struggles emerge especially in teen years thanks to the independence they crave.

Overall you’ll find your Scorpio Boy relatively quiet until something gets under their shell. Like the female of the species they yearn for freedom, often much too soon.

In school this Scorpio Child will likely love numbers and may actually focus on a future in the financial industry. In the class or at home these boys like control and power and have to remind them who is TRULY the boss.

Scorpio’s have a natural ambition that drives them and drives them hard. Whatever career they choose, they are likely to be successful.

However, Scorpio’s don’t like a lot of distractions in their workspace, so good careers to consider are telecommuting positions or something else that allows them to be their own boss.

Generally this Star Sign is just focused on doing a good job and building an unbeatable reputation.

Others are not so tuned to the proverbial dark side and look for a smart, persistent pet with a secretive allure. Try a Burmese cat.

If there are hobbies that combine the mind, body and spirit the Scorpio will be even happier.

Nonetheless, a ruthless game of cards suits this Zodiac Sign just fine as does collecting specific types of accessories.

Best Gifts for a Scorpio

Wait until your Scorpio isn’t expecting something then drop the surprise in their lap. Don’t let your packaging give you away either. Suspense is delicious to a Scorpio!