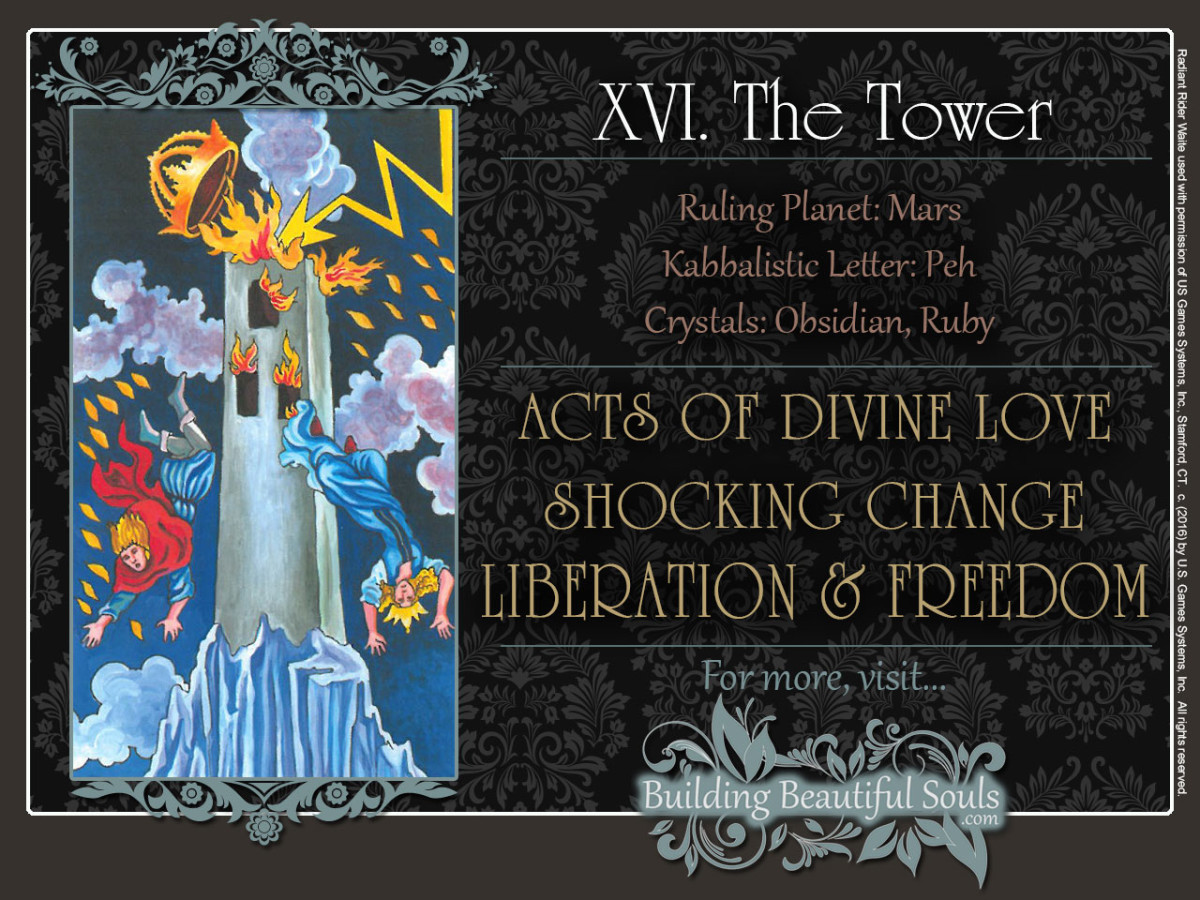 Without warning, bolts of lightening blow the world – your world – of illusion to smithereens.

But when you finally open your eyes (you know you had them shut because that’s what we all do during the scariest parts of movies) what you “see” is that your world, your life is bigger and oh-so-much better.

On the Tower tarot card the lightning bolt symbolizes one of those incredible insights which open your mind to new opportunities and, more importantly, hidden or suppressed talents!

How was your true self hidden from you? Ego. It trips us up and stands firmly in the way of progress. See, our ego falsely imprisons us. It makes us slaves to the material world, represented here by the Crown. The Tower tarot card shows us that as the Golden Crown topples off the top of the Tower, so does your Ego during this time of duress.

However, that which is dramatic, doesn’t have to be traumatic.

Your soul has been yearning for this change. You just didn’t know how to get there.

The Tower card’s windows have shown you for quite some time that there is a whole world outside your comfort zone.

But authority and truth are not the same thing.

Take another look at the world of the Tower card that’s collapsing like a house of cards: a Grey prison tower on a lonely mountain with cliffs too steep to climb. That golden crown is a beautiful façade but inside the Tower, it’s dark and cold.

With no way in or out, no power on earth can come to your rescue.

You’re not the people falling into the deep, but the prisoner held captive in the tower’s darkest cell. This is not a disaster, but the moment you’ve been praying for.

When the Tower tarot card shows up in a reading, it is often interpreted as a sudden loss or devastating trauma, but that interpretation is misleading.

While the aggressive energies of Mars are indeed destroying aspects of your life that have defined you, they are liberating you at the same time. Therefore, it is important to take a look at what is actually being destroyed when the Tower tarot card shows up.

A situation that has trapped you with a false sense of security is suddenly coming to an end. Note how both the crown and lightning bolt of the Tower card are yellow, the color of air, intellect and inspiration. There’s a huge difference between what you think you’re capable of and what the universe knows you can achieve.

Looking out the lonely windows of your tall, grey prison in the Tower tarot, you’ve wondered how it was possible for other people to live their dreams. Throwing your hands up, you’ve been telling yourself that this is the best you can do. And as these walls come crashing down, your path is no longer obstructed, and your eyes wide open.

This dramatic change could be a physical situation, such as a job that’s paying the bills but is killing you slowly – or a relationship you’ve been too afraid to leave because it seems better than being alone.

Remember, the Tower tarot card represents an act of divine love leading to important insights. While something is being destroyed, something new is being created. A better paying, more satisfying job may be just around the corner.

A new, true love can now enter your life.

The Tower tarot also implies a dramatic change at the mental and spiritual level, such as putting a long held prejudice to rest or changing your religious beliefs.

The Tower tarot is one of the hardest cards in the deck to experience. But what are you ready to sacrifice to gain true freedom of spirit? When the Tower card shows up reversed, it means you’ve already made that decision. Now it’s time to move on.

When reversed, The Tower shows your shock, your paradigm shift has already happened.

Yet, you may not see it that way.

Perhaps this is all you have ever known or you don’t think that your life can or should be changed. It’s tough to let go of old beliefs and ways.

After all, it has provided you with a sense of who you are and what your place in the world is. Maybe you’re just tired of fighting, and you have resigned to what you think is your fate – even if you are dying inside.

It’s time to ask yourself some important questions: To what degree has your prison shaped – no, twisted – your sense of what’s normal?

Have you come to believe that this dull routine with its degrading limitations is somehow the way things are supposed to be? That this is all you deserve, no matter how miserable it’s making you?

You have the power to take control of your life. And you’ve already started or The Tower Card wouldn’t have presented itself in your reading.

The Tower tarot urges us to arise from the rubble of our current situation, dust ourselves off and dance down the path to consummate freedom.

The Tower is the sixteenth Major Arcanum. Added together, 1 (the solar, divine energy) and 6 (associated with Venus and the power of love) make Number 7, the number of Neptune, which quite literally represents earth shaking psychic and spiritual insights. This is an act of divine love, meant to move you forward, not destroy you.