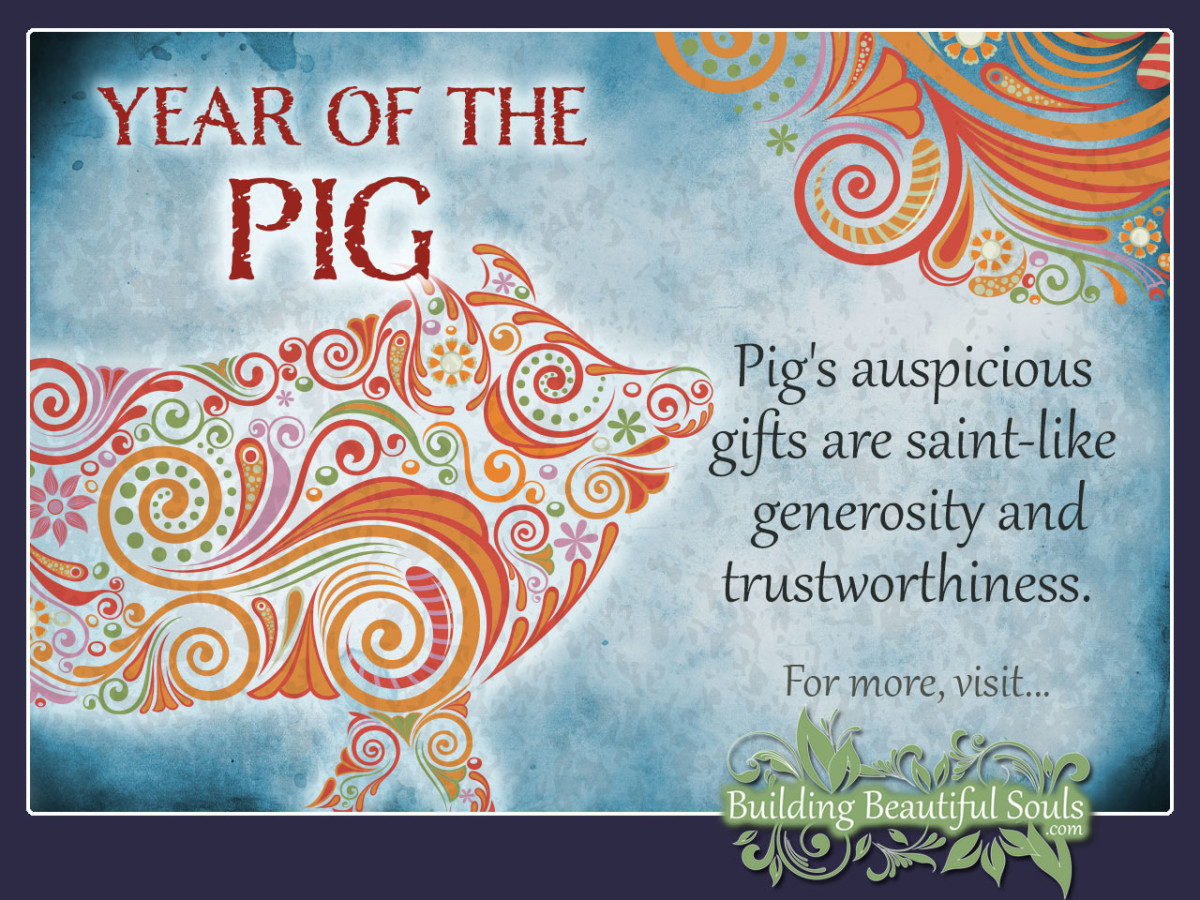 In Chinese symbols, the Pig has an almost saint-like quality. Those born in the Year of the Pig are among the kindest, gentlest, and most selfless of the Chinese zodiac signs.

The Chinese Pig personality is so altruistic that they truly feel very uncomfortable when someone comes to their aid and they will go to great lengths to avoid asking for help. The Chinese Pig is happiest when helping others.

Of the Chinese Zodiac animals, the Pig is one of the most committed to peacemaking. But do not be fooled into thinking the Chinese Pig is weak because of their pacifistic ways .

Physically, they are generally extremely strong; possessing great courage and stamina. Once the Pig begins a relationship, project, etc. they will persevere for however long it takes to see the situation through to whatever conclusion there will be.

Being surrounded at all times by friends and family is nirvana to the Chinese Pig. They absolutely love to sponsor and attend social events of all kinds. Because of their loyalty and trustworthiness, the Chinese Pig is a much sought after and revered friend.

In some ways, the Pig has earned its reputation for gluttony. Their voracious appetite for the hedonistic pleasures this world offers can cause the Chinese Pig to engage in a lifestyle of fast living. So much so that they can easily slip into a world of depravity; losing all touch with reality.

Honest to a fault, the Chinese Pig is also a natural innocent and, so, can easily be taken advantage of by the unscrupulous.

Though quick tempered, the Pig will generally give in to an opponent. However, even they can be pushed too far and when that happens, the Chinese Pig is as ferocious and savage a warrior as the legendary Chinese Tiger.

Whatever the Metal Pig does, it is done all the way and then some. This Chinese zodiac sign is larger than life. Their appetite, passions, goals, dreams and emotions are intense and the Metal Pig will endure almost anything to have what they desire.

Those born in The Year of the Metal Pig are incredibly affectionate and caring. However, the flip side of this Chinese animal is that they can be prone to a possessing a violent temper.

Though very social, the Metal Pig doesn’t always “get” the social cues. Like all the elemental types of Chinese Pigs, they want to believe the best of people so they sometimes aggrandize their friends and don’t realize when someone is their enemy.

The Water Pig is the more peaceful and centered of all the elemental types. Because of the water in their charts, this Chinese zodiac sign has an intuitive knowing about people’s most inner secrets and desires. Even still, they strive to see the good in humanity and can come into harm’s way because they will consciously and subconsciously deny that anyone could or would do anything “bad” to them.

When the Water Pig loves someone, they want the whole world to know and will put much effort into showing their friends, family members, lover, etc. how much they care for them.

At their worst, those born in The Year of the Water Pig have an addictive personality. Sex and alcohol make the most dangerous ground for them to walk on.

A bigger heart of gold there may not be in all the Chinese zodiac but the Wood Pig will not hesitate in manipulating people and situations so they can have what they want.

Money seems to find the Wood Pig whenever they want or need it and business ventures always seem to have a way of getting off the ground when this Chinese zodiac animal is involved.

Those born in The Year of the Wood Pig are natural communicators. They always seem to know exactly what people want to hear and are able to sway others.

The Fire Pig is a force of nature and completely motivated by love. They know no fear of any kind because their optimism gives them a sort of blindness to anything negative or potentially harmful. Further, that same optimism gives them a confidence few have as it simply never occurs to them that they could fail; ironically they rarely do.

Those born in The Year of the Fire Pig will work like the proverbial demon to accumulate true and lasting wealth so as to provide for their friends and family.

The Fire Pig is in their element when surrounded by large groups of people. To that end, they make great heads of companies, states, countries, etc.

The Earth Pig is grounded, patient, dedicated and enduring. Their willpower is the stuff stories of heroes are made of. This Chinese zodiac sign can and will endure conditions the rest of can’t even comprehend in order to achieve their desired goal.

Kind, thoughtful and sensible, those born in The Year of the Earth Pig usually find financial success and stability. What they want most is a happy and peaceful home life.

The Earth Pig loves to indulge in food, drink and laughter. At times they can over do it with the food and drink but that is not the norm for this fairly well balanced Chinese Pig.

Highly sexual, the passionate Chinese Pig is affectionate, warm and supportive of their partner. When in love, they love with their very heart and soul. The Chinese Pig doesn’t try to hide their emotions and, indeed, are not really capable of doing so.

Because this Chinese zodiac animal wounds as deeply as they love, they have a tendency to carry the hurt around in their heart for years.

For best zodiac compatibility, The Pig’s best options are The Chinese Sheep and The Chinese Rabbit.

These children are little knights in shining armor (even the girls). So loyal in fact that they are blinded to the faults of those whom they’ve pledged their allegiance to.

Usually very physically strong they are brave and loyal. Independent and inquisitive, the Chinese Pig child has a great sense of humor and can let most things easily roll off their backs. When they do experience a setback, they bounce back quickly.