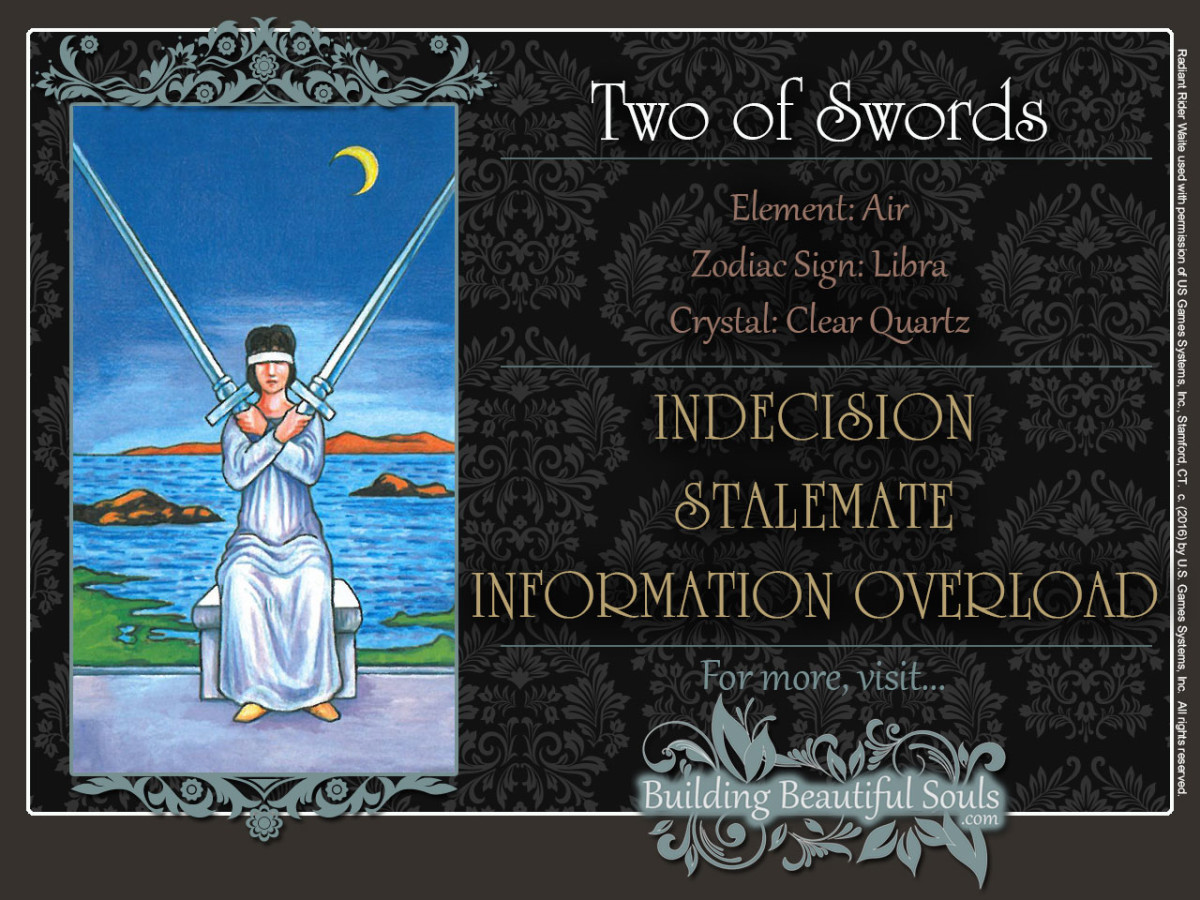 The Two of Swords Tarot Table of Contents

Things are currently in a precarious balance in the Two of Swords. From your point of view, there may be too many unknowns to take action at this point.

The woman sitting on the stone bench is blindfolded in the Two of Swords. While she can’t see a thing, she is holding up two very large – and dangerous looking – swords. But she’s not doing a thing.

The woman in the Two of Swords may have been frightened into inaction, or she could just be waiting for the right moment to strike. Are you brave enough to find out?

Her expression is completely blank. Her arms are crossed over her heart.

One interpretation of the Two of Swords is that she has shut herself off from her own feelings – and her problems in everyday life.

On the other hand, it’s just as likely that the woman in the Two of Swords is only hiding her intentions from you while she is planning her next move.

There’s no way of telling.

The Kabbalistic title of the Two of Swords tarot card is Lord of Peace Restored. This peace is still fragile. The astrological correspondence, Moon in Libra, indicates that emotions are still running high, while Libra’s balancing influence is trying to keep things as calm as possible.

The calm waters behind the woman in the Two of Swords show that things are quiet for now. But looking at the jagged rocks, it’s clear that old wounds haven’t healed yet.

In the Two of Swords, the night sky illustrates the woman’s current state of darkness, but the waxing moon is shedding light on new possibilities – the distant lands at the other end of the water. Kabbalistically, it also symbolizes divine mercy.

The woman’s white robe shows that she embodies spiritual purity, or that she pursues it.

Unsheathed swords can never be at rest for long.The woman on the Two of Swords will have to decide on a course of action eventually. You cannot see their tips, so she has not made up her mind.

In a Tarot Reading, the Two of Swords card shows that a sense of balance has been restored. But this balance is imperfect. More work must be done to achieve lasting harmony.

Yes, the hostilities have ceased, but you’ll still need to negotiate permanent peace terms. The last argument may be over, but that’s only because the two of you lost your voices from all that yelling. While you’re drinking soothing herb tea, you’ll both have to decide whether to move on to round umpteen or start repairing the damage.

Saying you’re sorry is definitely a good start, but it may not be enough.

In the Two of Wands, peace is achieved through non-action – but not in the Taoist sense, where removing yourself from the situation also eliminates the conflict. Looking at the astrological correspondence, it’s not the idea of “passive resistance” practiced by Martin Luther King and Mahatma Gandhi, either – which wasn’t passive at all. These civil rights leaders actually sought out confrontation, but they refused to react with violence.

This peace is based on avoidance, and that’s why it’s tenuous. Yes, sometimes that’s a good thing. For example, if you’re in an anger management program, flipping your inner “off switch” when faced with a trigger can keep you out of a lot of trouble. Good job! Keep working that program. You’re making awesome progress. You will develop constructive ways of asserting yourself.

But sometimes, avoidance only shows that you’re not willing to grow as a person. Here, you are reminded that courage is an important part of your personal and spiritual development.

The Two of Wands tarot card also shows an imperfect understanding of justice. The divine justice shown in the Major Arcana is aware of all the facts and underlying reasons, and it acts accordingly. In the Two of Swords, you don’t know all the facts, or you may ignore them even though they’re right in front of your face.

The justice expressed in the Two of Swords card is based on a strange notion of impartiality. It doesn’t have all that much to do with fairness.

Remember getting grounded right along with your sister – even though it was she who started that fight? The doctrine of “I don’t care who started it, you’re both in trouble” has been employed by heads of families since time immemorial.

The precarious balance in the Two of Swords tarot upright card is only a temporary fix. It buys you just enough time to work out a permanent solution.

It’s like a makeshift splint applied to a broken leg. It keeps the leg immobilized to prevent further injury until the paramedics arrive and take you to the hospital. But you still have to go to the hospital, or your leg may even get worse.

When reversed, the Two of Swords tarot card shows that this balance has come to an end.

After all, those swords the woman is holding look pretty heavy. She can’t keep them up forever. Further, deciding to make no decision is a decision.

Maybe you’ve been working too many overtime hours, so you can maintain your family’s standard of living. You’re feeling the burn. There’s only so much a woman – or man – can do. You’ve been cranky and stressed out for a while, and working all the time is beginning to affect your health.

How long until you reach the breaking point?

Remove the blindfold. It’s time to face the truth. Your family may or may not accept that you can’t maintain this hectic schedule. They will need to choose between the house in the suburbs and the old, healthy you they love and cherish.

Your choice, on the other hand, is to sink or swim.

When reversed, the Two of Swords, may also point out that you’ve underestimated an opponent. The woman in this card may not be closing herself off from her feelings, at all. It’s very possible that she was only hiding her intentions from you.

Now her White robe is only the appearance of innocence, and her blindfolds conceals her eyes, the “windows of the soul,” from you. Remember that those swords are razor sharp.

This still water is running much deeper than you think in the Two of Swords. Approach her with caution!

Kabbalistically, twos refer to the zodiac, the grand cosmic stage on which all big decisions are made. In traditional Numerology, 2 is associated with the moon’s emotional intelligence.

In the Two of Swords, these energies combine to show the need to balance thoughts and emotions.