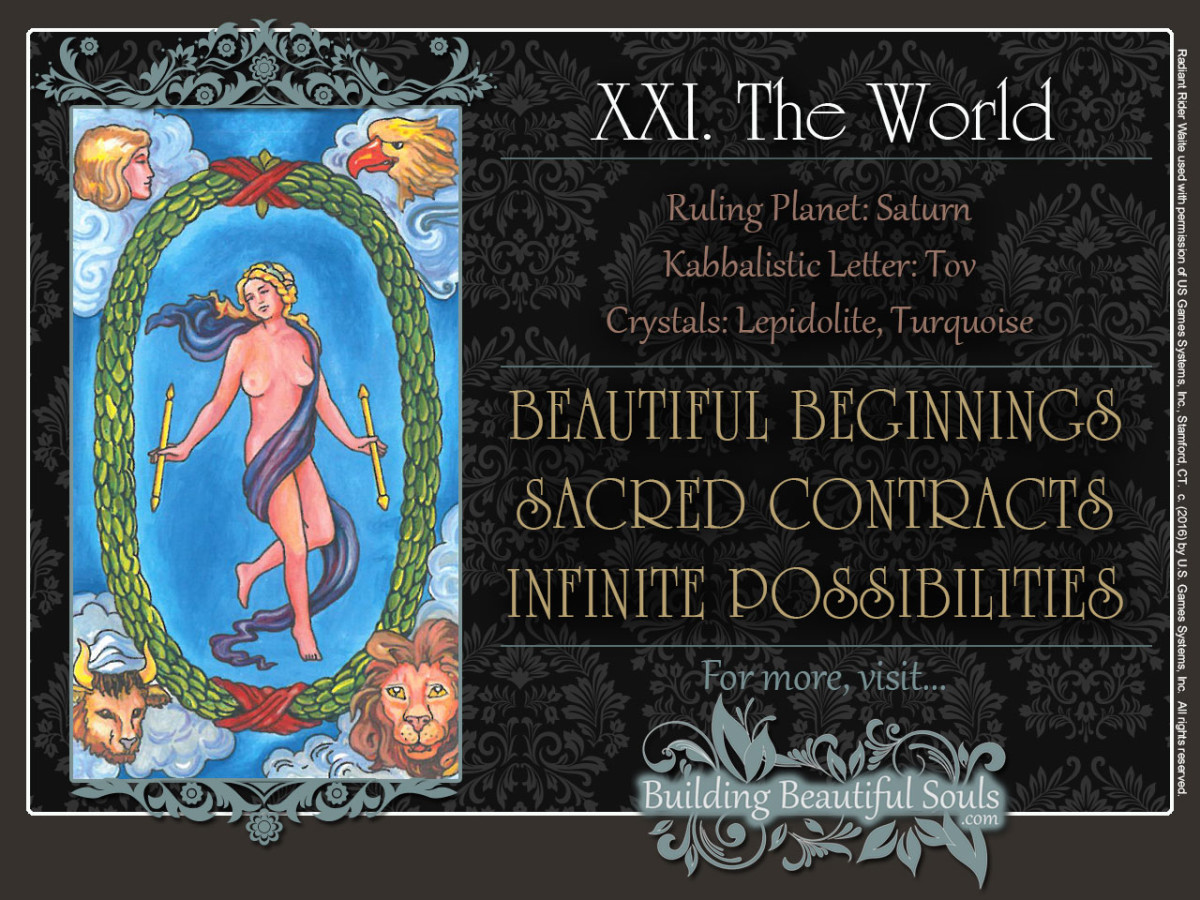 Surrounded by the traditional laurel Winner’s Wreath, our dancer in the World tarot shows that when you’re living in perfect harmony with the universe, it conspires to crown your efforts with success!

Even more fabulous, the red ribbons holding the wreath together on the World tarot card form the eternity symbol. This is a reminder that we are infinite souls within an infinite universe with infinite possibilities for advancement and achievement!

The World tarot is associated with the Hebrew letter Tav, representing the flow of energy between the earthly and lunar consciousness, symbolized here by the twinkling stars set in the Winner’s Wreath.

Tav also marks the beginning of what ceremonial magicians call “the Great Work,” the one task we’ve been placed on this earth to accomplish. Completing this task is, well, a lot of work.

But the dancer on the World card makes it look so easy.

The dance represents constant motion and craft perfected to art. Notice that the dancer’s legs on the World card form a cross, symbolizing perfect balance.

The dancer in the World tarot card holds a White rod in each hand. These rods are polar opposites: positive and negative, light and dark, etc. She has mastered her inner and outer world perfectly.

The expression on her face is one of intense concentration. Our World tarot card dancer is actually engaged in a flurry of activity, and even her minutest gesture has a specific purpose.

She’s also having a lot of fun!

Remember the first game Mary Poppins teaches Jane and Michael when she arrives at the Banks house? It’s called “Let’s Clean up Our Room.”

Is it any surprise that Kabbalists also call the World tarot “the administrative intelligence?”

Such perfection, skill, and sustained effort shown in the World tarot can only be rewarded with success.

This is shown in the World card by the the arrival of the four angelic beings in the cards’ corners (Lion, Bull, Angel and Eagle). Just as in The Wheel of Fortune card, the celestial beings symbolize the Four Elements, the four fixed Zodiac Signs:

The wreath’s oval shape in the World tarot symbolizes the cosmic egg – the world egg of the Greek creation myth. The dancer’s scarf, her old karma, is already sliding off her body. When it’s completely gone, the egg is ready to hatch. Once she has discarded this temporary shell, too, a whole new world, a new universe is born.

She is quite aware of the physical world, enjoying its blessings, but her nudity shows that she isn’t attached to them. Having attracted powerful cosmic forces, she is not controlled by them. If things have been great so far, they are about to become even better.

So the question is, “What’s next?”

When The World tarot presents itself upright in a reading it’s time for you to yell, “Yay ME!” and give yourself some credit!

If the world is being handed to you on a silver platter, you’ve done a lot of work to deserve it. True, it may not have felt like work, but that’s probably because you’ve had so much fun along the way.

Or could it be that doing the right thing just felt natural? As if by instinct, you knew exactly what to do at precisely the right time, and the universe responded by giving you all the needed breaks, opening doors you never even knew existed.

The keyword here is “responded.” The universe may have been good to you, but you are the one who sent out those good vibes to begin with. Before you knew it, you were the master of your own karma, and now the time has come to cash in your winnings.

The important question is, “What’s next?”

Having completed one important life stage and passing all tests with flying colors, you are ready for new experiences, challenges, and lessons. Your success has brought you to a new threshold.

Now that you have done all there is to do and seen everything there is to see, the universe inviting you to open your awareness to a higher, more spiritual reality.

What’s important, you’re well prepared for this step, looking forward to a new grand adventure with a sense of joyous anticipation.

Your bags are packed for the journey ahead. But there wasn’t much to pack, since you’ve let go of old karma and useless hangups. Traveling lightly is definitely your style.

What are you waiting for?

When reversed, The World card indicates an energy flow from the lunar consciousness to the physical awareness.

If you are ready for these energies, they will manifest themselves in the form uncanny insights and intuitions, new perspectives, and possibly even psychic dreams.

The problem is that “decoding” these messages is not always an easy task. You may be wise in the ways of this world, but what about the ways of the next?

Imagine your reaction if you received an official looking letter in the mail, the only English words being “Important! Respond Immediately!”

If these communications happen at a subconscious level, you may react to certain situations in unexpected ways.

For example, the sight of a simple rose could overwhelm you with intense emotion. You have no idea why, but may find yourself laughing and crying at the same time.

It’s a good idea to return to your center and take some time to process all this new information.
The World tarot can also show that you’re about to make a drastic lifestyle change.

That’s what happened to the French painter Paul Gaugin. After a suffering some serious health issues, he abandoned his successful career in the stock exchange, dedicating the rest of his life to art.

The sudden awareness that the universe is much bigger than you may have thought can be disconcerting, because it forces you to question just how much control you have over your life.

This can cause anxiety and even fear.

It’s not the fear of the unknown. Fear has nothing to do with the unknown. Otherwise, kids would be scared to death of Santa Claus.

Fear is our knowledge of powerlessness when we are faced with something greater than ourselves.
That’s why many people who love God also fear him.

The challenge posed by The World tarot reversed is to stop, take a step back, and reflect before making any big decisions.

21 It’s no accident that The World card is so often associated with good fortune. After all, the triple seven (3×7=21) is every gambler’s favorite number. On the Tree of Life, the seventh fixed point is associated with pure inspiration and the planet Venus, symbolizing the power of love.

Being composed of 2 + 1 The World card is associated with the Number 3 (but on a higher vibratory level) and reminds us that polar opposites in perfect balance bring forth new life.