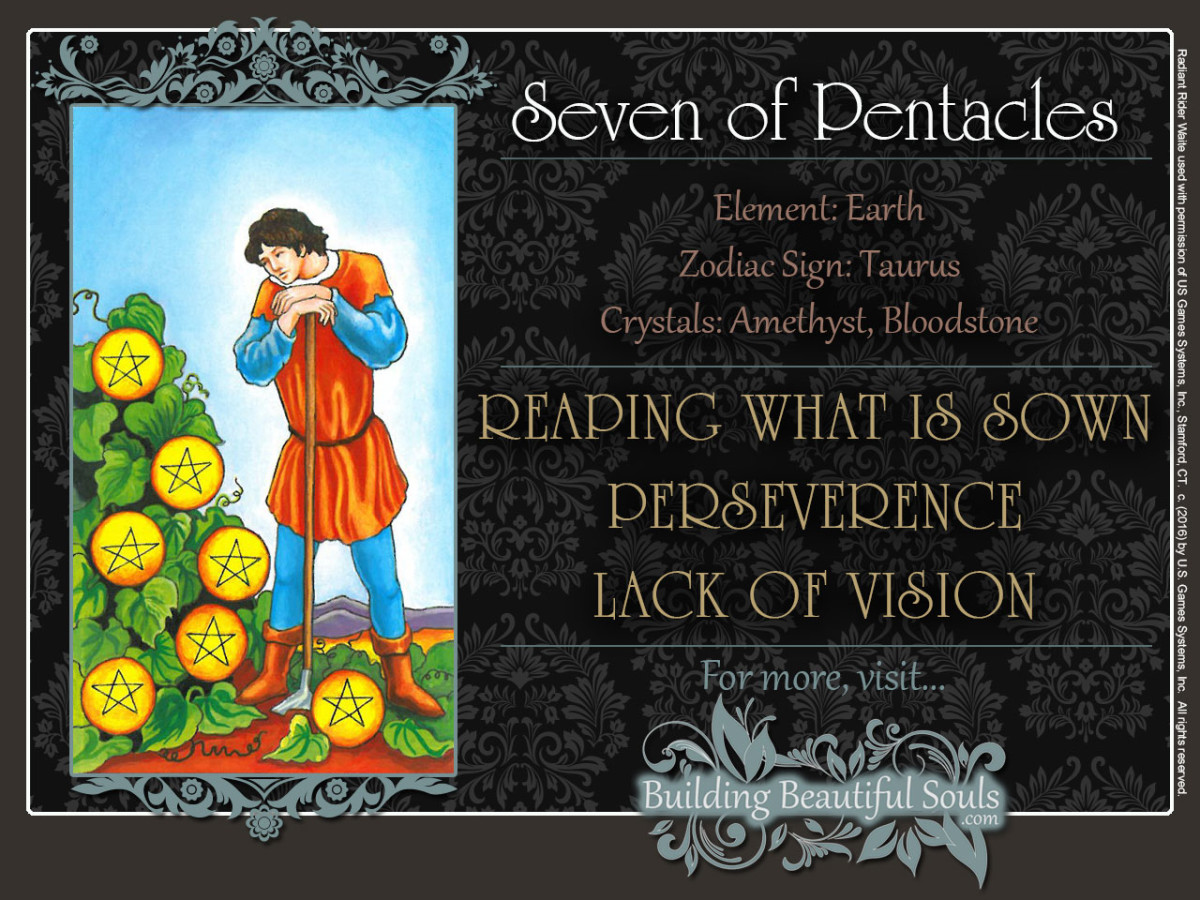 The Seven of Pentacles Tarot Table of Contents

It’s clear that your hard work is paying off. Now you should ask yourself if there are more efficient ways to get the job done.

You’ve been able to carve out your niche by keeping your nose to the grindstone and making do with what you have. The grey sky in the Seven of Pentacles tarot card symbolizes constancy but also inflexibility. It shows that you don’t see the need to change how you’ve been doing things.

After all, it’s worked for you so far.

The olive green heart shaped leaves in the Seven of Pentacles tarot card show that you have been able to make ends meet – doing what you love. Others doubted you, and you’ve proved them wrong. At the end of the month, your bills are paid and your bank account is in the black. Just look at the crop of pentacles.

Congratulations! You’ve made it. Or have you?

Just like the worker in the Seven of Pentacles card, using simple tools gives you a sense of pride. When the blade is buried in the ground, his shovel looks like a staff. Staffs are well-known symbols of progress and authority. The shovel itself beautifully tells the story of how honest, hard work allows you to lead a simple life.

Now look at the tired expression on the worker’s face and the grey, barren mountains behind him on the Seven of Pentacles tarot card. As the mountains show, you are doing so much better now than you have in the past. You’re exhausted, but you are doing all right.

The sheer doggedness of Saturn in Taurus has given you the strength work long hours and stay focused on your task. Consequently, you’ve made a barren land bear fruit.

As you pause from your labors, reviewing their progress like the worker in the Seven of Pentacles, take some time to think about your next step. Don’t forget to add some fun to your busy agenda. All work and no play, will make you dull indeed.

Knowing when to shift to the next gear spells the difference between success and failure. The Seven of Pentacles tarot card tells you that the time is now.

Hard work and raw talent have allowed you to make something from nothing – in business, your career, or any other situation you can think of.

If you’re operating a business, it has reached a critical stage. If it’s a part-time business, you’ll have to choose between it and your full-time job, because you can no longer do both. If it’s a full-time business, you have to find a way to keep up with your customers’ demands. While growth is always good news, it also means that the old way of doing things doesn’t cut it anymore.

No matter how much you love what you do, there are limits to how hard you can push yourself. At some point, you’ll have to find a way to work smarter, instead of harder.

Robert A. Heinlein wrote that “progress isn’t made by early risers. It’s made by lazy men trying to find easier ways to do something.”

Well, that’s not entirely true, the point is well taken.

For example, medieval stonemasons constructed tall Gothic cathedrals, like the Dome of Cologne, without power tools or steel cranes. But it took decades, even centuries, to build those magnificent structures. Modern technology makes it possible to build such architectural marvels in a few years.

In career matters, the Seven of Pentacles tarot card suggests that you’ll need to learn new skills to advance in the company. Maybe you’ll have to take extra coursework to qualify for that promotion you’ve been wanting. If you have just been promoted to management, you’ll need to learn many new things – and quickly.

It’s the same with relationships. The time to take the next step is now, or you’ll stay in the “friend zone” forever.

Remember that the lesson presented by the Seven of Pentacles tarot card is to work smarter, not harder.

When reversed, this card warns you that you have been pushing yourself too hard for too long. If you don’t take some time to recharge your batteries, the universe may decide to pull the breaks for you.

The energy expressed by this card’s astrological correspondence, Saturn in Taurus, is that of your “Type A” personality. Its aggressive energy and single-mindedness has allowed you to do incredible things. It also takes its toll on you over time.

The story of Alexander the Great is a perfect example. His drive and ambition made it possible to conquer one nation after another. In fact, he led his armies all the way to India. But Alexander’s “fight hard, play hard” lifestyle left him exhausted, and he withered away from fever in Babylon.

This continuous draw on your energies is affecting how you perceive your situations and those around you. How you manage yourself will determine whether important opportunities remain or not. Therefore, be careful not to lash out in anger. Instead, be assertive and set boundaries.

Oh, and try not to do everything yourself. It’s perfectly okay to delegate. While you’re at it, seek advice from others, even your critics.

Criticism is just another word for “free consulting.”

Some doors may indeed close, and you may incur some financial or personal losses. That’s the universe pulling the breaks. Be honest with yourself. Could you really have handled that extra responsibility?

But there’s no need to throw in the towel. All is not lost.

Take some time to recover. You have been running on fumes for too long. Use your downtime constructively and focus on what’s truly important in life. You may have missed this chance, but be patient.

Life is full of second chances.

Sevens are associated with Neptune: powerful mysteries, psychic insights, and introverted personalities. Kabbalistically, they are attributed to Venus and the power of love. Both correspondences combined reinforce the single-mindedness in which you go about your. Just make sure you don’t become too absorbed in your work.