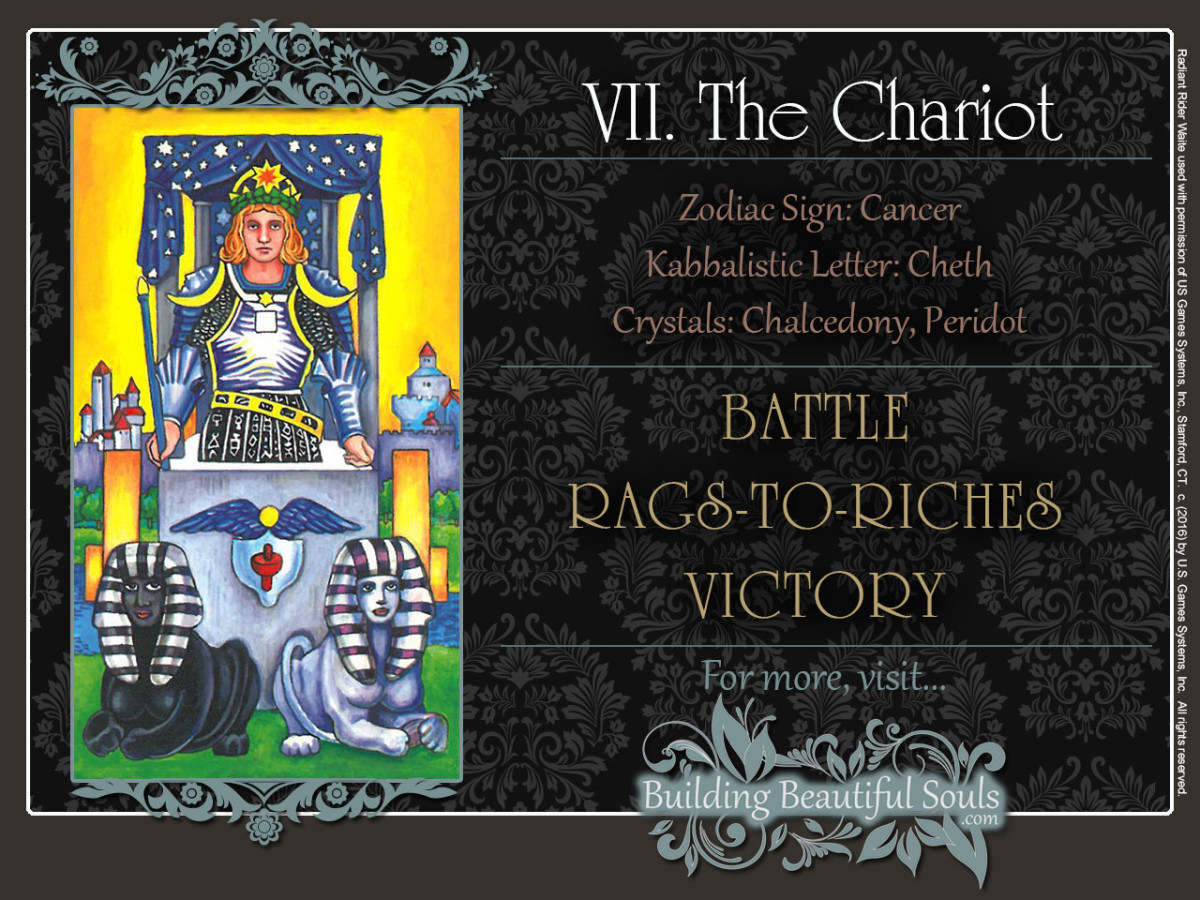 The Chariot tarot card is a rags-to-riches story in the truest sense, but it’s much more than that.

You have overcome all material obstacles.

Even better, you have learned to master your emotions and have shown the ability to control the forces of nature.

Astrologically, the Chariot tarot card is associated with the Zodiac Sign of Cancer, a staunch homebody on one hand, but a master of inner peace on the other.

Note that the Charioteer’s spaulders, or shoulder armor, are the waxing and waning moon. They represent both, the Element of Water (emotion) and polar opposites in harmony.

Moreover, you have sorted out all intellectual, ethical, and philosophical problems required to cross the great divide between the worlds of creation and pure spirit.

The Chariot tarot is not only an inner victory, it’s an external victory, as well.

The river behind the chariot is a reference to the divide between the worlds of creation and pure spirit, known among kabbalists as the Great Abyss.

You may remember the scared little crayfish in The Moon tarot card. Drawn out of his shell by a mysterious and irresistible force, he embarked on a journey from which there was no return. Small and seemingly helpless, he rose from humble beginnings, mastering every challenge along the way.

Hasn’t he shaped up quite nicely?

The eight pointed star in the charioteer’s crown in the Chariot tarot card is solar fire. The crown is ringed by a laurel wreath, a sign of victory. The square on his breast plate represents earth. Like the Hermit, he carries a staff, a symbol of authority and spiritual progress.

The Chariot tarot card represents an inward and outward transformation, a rise from humble beginnings to the tallest pinnacles of success. Your triumphs are not only material, they reach across all levels of existence. In the beginning, others may have doubted you. You may even have doubted yourself. However, you learned all the right lessons with each challenge coming your way, and now doubt has long been replaced with confidence and hope.

Others keep asking you how you did it. Having crossed rushing streams, climbed tall mountains, and wrestled with monsters, you still look like a million bucks.

All you can do is shrug your shoulders and smile.

Despite your success, it is still easy to make you blush. It hasn’t gone to your head because you haven’t forgotten who you are. In fact, you now know yourself better than ever before.

The Chariot tarot represents a doer in every sense of the word, a champion following a higher calling. It combines the promise and youthful energy of The Sun card with the intense focus of The Temperance card and the keen observation and deep understanding of The Justice tarot card symbolism and messages.

This means that although your actions may seem daring to others, you do not blindly rush into things: The risks you take are calculated.

The Chariot card not only points to an inner journey. In a reading, the Chariot tarot card may also show actual travel. This may be a vacation to an exotic place or an important business trip certain to be crowned with success. It could even be a permanent move to another town offering better opportunities.

Just when everything should to be coming together, powerful forces suddenly seem to pull you in opposite directions. There are a thousand distractions, and it feels like you are putting out fires everywhere. Others are looking to you to solve their problems, or they are placing demands on your attention over trivial things.

You would prefer nothing more than staying in bed, pulling the blankets over your head in the hope that it will all disappear overnight.

The problem is, it won’t. That’s not your style, anyway. You’ve never shrunk away from a challenge. Why start now?

This is not the time to lose your nerve. That will only make things worse, and you know it. Instead, focus on regaining your footing and getting the situation back under control.

It’s not impossible to fix what went wrong, but the longer you delay, the more difficult it will become.

Go within and find your center. That’s not the same as withdrawing into your shell. A tactical retreat is not an unconditional surrender. Use your amazing problem solving skills that have pulled you out of more than one tight spot in the past.

Is the root problem internal or external?

Someone else may have blamed you for something that wasn’t your fault, but you decided to have an open mind about it. You may have decided to take one for the team, and your peers are mistaking your sacrifice for weakness. In this case, you need to be more assertive.

On the other hand, you may have become too sure of yourself. Believing all obstacles were behind you already, you let go of the reins, letting things spin out of control. Or, being so close to the finish line, you’ve allowed the fatigue to set in too soon.

Remember that the final spurt is the most exciting part of any race.

Finally, you may be struggling because “things” are out of your control right now. You really, really hate that. But The Chariot tarot card inverted is a signal that it could be time to let someone else “take the reigns”, at least for a little while.

The Chariot card is the seventh Major Arcanum. In Numerology the Number 7 corresponds to Neptune, and it signifies psychic vision and spiritual progress gained from journeying within.