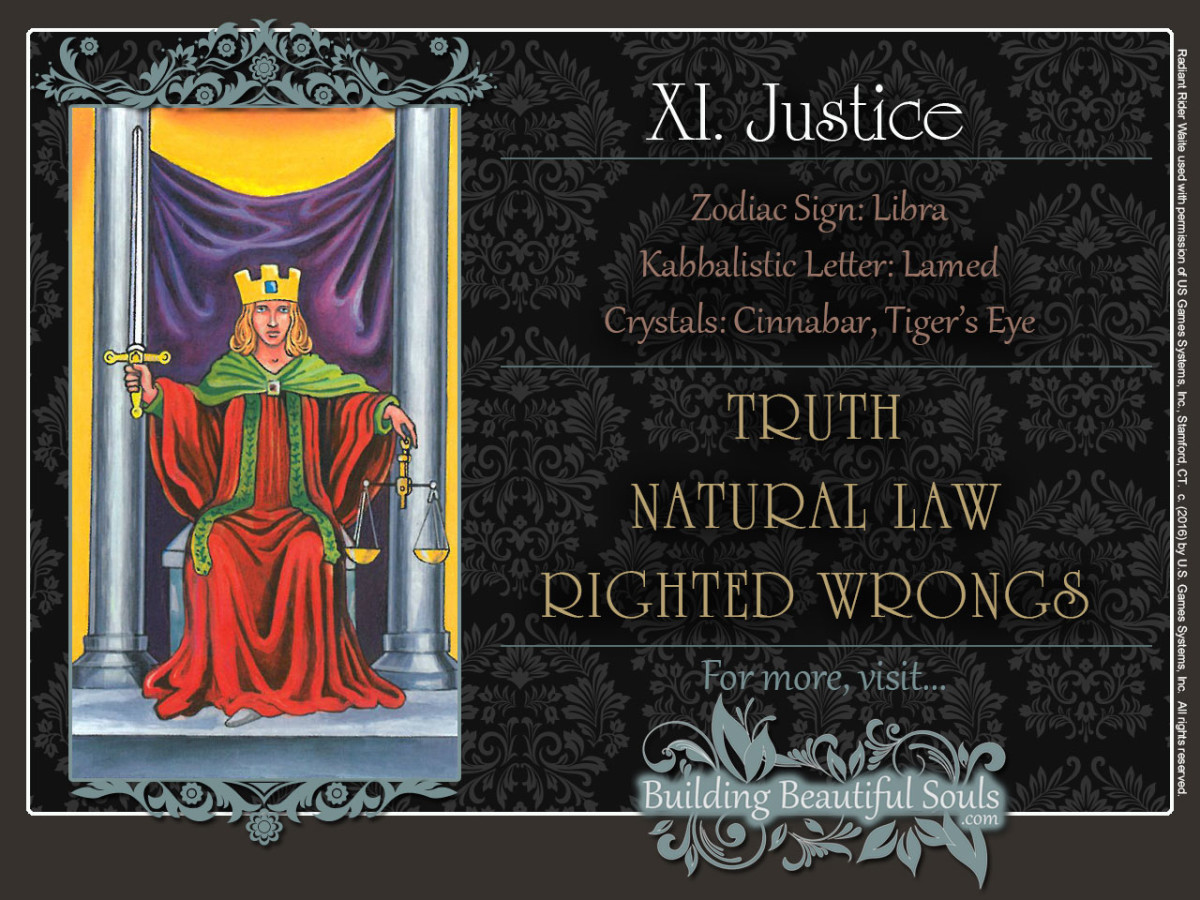 Special note: Many mistake the robed figure in The Justice card to be a man.

Indeed, she is not.

Those who dig deeply into esoteric symbolism come to know The Justice tarot card is sometimes also referred to as “the Great Mother” – champion, protector and disciplinarian of all Earth’s children.

The Justice card, though symbolically representing justice, balance, fairness, truth and wrongs which are righted, is less literal and more figurative.

Yes, the meaning of the Justice card is about legal proceedings but moreover cosmic or divine principles.

The universe is governed by eternal, unchangeable laws and principles. Natural or Universal Laws, such as the Law of Gravity, not only set the course of planets but they also determine what happens when you drop a vase on a marble floor.

Moral principles determine how people treat each other. For example, they teach us that respect is something that can be earned and lost.

Natural or Universal Laws preserve the balance, or equilibrium, necessary to keep the universe going.

The pillars in the Justice tarot card are grey, because these cosmic principles are eternal. The pillars of the Justice card have been called Severity and Mercy. Both are necessary, because dropping the hammer on someone over every offense is just as destructive as letting people run all over you.

The pillars of the Justice tarot card have also been referred to as Positive and Negative as well as Good and Evil.

Though human justice can be blind, divine justice sees everything. That’s why the crowned figure on the Justice tarot is not hoodwinked.

The laws of the universe are inescapable and everything we do has a consequence, but they’re not based on a simplistic tit-for-tat principle. The scales of the Justice tarot card symbolize justice and balance. But it weighs more that “just the facts, ma’am.” The crowned figure of the Justice card doesn’t judge everyone by the same measure, but by one’s own merits.

The judge of the Justice tarot is robed in red and yellow, and she balances love and reason. So does the rose colored veil behind her as is conceals most of the yellow (Element of Air, intellect) background of the Justice card.

The judge’s yellow crown set with the azure crystal combines authority, intellect, and divine mercy. While she favors mercy, she’s not afraid to use the sword.

Interestingly, the sword also symbolizes equilibrium. Note the blade’s azure color, which is associated with divine mercy. The sword on the Justice tarot card is double-edged, because it can be used both to destroy and consecrate.

When The Justice tarot card comes upright in a reading it’s a call for you to remember that no matter how chaotic life may be at times, everything happens for a reason.

While the divine source is benevolent, it must also keep the universe in a state of balance. It applies justice when necessary and mercy when possible. This is why the Justice tarot card is associated with Libra, the cosmic peacemaker.

Following this principle, there is a consequence for everything you do, say, and think. But this does not always mean that every good deed is rewarded immediately and as you see fit or that every wrongdoer is punished right away and as you deem just. Everyone gets what they deserve in the end, but not always right now, and “deserve” is not always for you to decide.

An upright Justice tarot card can denote you’ve been on a quest to discover truth in all its forms. You’ve been looking at the bigger picture and are coming to understand how you fit into it and how your actions can determine what happens to you.

With this knowledge comes the wisdom and power to accomplish your goals. As you reflect on your beliefs, thoughts, feelings, and actions, you receive important insights on how to be a more spiritual person. Even better, you are ready to make the necessary changes in your life.

You may receive crucial information to make the right decision in important business matters. Having carefully reviewed all facts and possibilities, you now are able and willing to choose the best option in other areas of your life, as well.

Because the lesson is in the upright Justice tarot card also concerns moral law, it also shows that you have successfully resolved an inner struggle. Your conscience and common sense are coaxing you into doing the right thing.

Note: Spirit working through the cards can often be very literal in the messages it sends so The Justice tarot upright can certainly mean that any legal proceedings you might be involved in or contemplating putting into action will turn out in your favor.

When The Justice tarot card turns up inverted or reversed in a reading, it’s a call for you to acknowledge that while you are an important part of the universe, it does not revolve around you.

This news is much better than it sounds, and here’s why: If you’re going through a rough spot, it’s not because the universe is punishing you.

This means you have options.

You only need to see them and seize them. With options comes control, and with control, power. Look around you. Are others experiencing similar problems? Are your experiences part of a greater pattern? If so, what can you learn from them that may give you a leg up? Remember that knowing and weighing all the facts is one of this card’s most important lessons.

When reversed, The Justice tarot also points to a struggle between the ego and the cosmic order. Your ego is your sense of who you are. Like every other aspect of your existence, it’s a divine gift, and the process of actually destroying it is called brainwashing, not enlightenment. True enlightenment brings the ego into perfect harmony with the divine consciousness. In this state, the boundaries between the two disappear, but you are still you. And that’s exactly who you’re supposed to be.

Disharmony between the ego and the cosmic order leads to self-centeredness, self-righteousness, callousness, and imbalance. This struggle can occur inside yourself or someone else. Therefore, the challenge is to weigh what is happening inside you with what’s going on outside yourself.

Is everyone around you really as lazy as you believe, or have you scared them into doing nothing? They may think there isn’t anything they can do that will meet your astronomically high standards. You may need to revise the messages you are giving them.

Perhaps you’ve let yourself be dazzled by a charismatic person, and you are waking up to the realization that he or she can’t really walk on water, as everyone, including you, believed. Use your powers of judgment to make the best choice.

Note: Again, the meaning of tarot cards can be quite literal so an inverted or reversed Justice tarot can symbolize that a legal proceeding is not going to turn out well for you. It can also symbolize that “now” is the right time to take legal action against another.

The Justice card is the eleventh Major Arcanum. In Numerology meanings, 11 is a Master Number. However, it can still be reduced to the Number 2.

When 11 is viewed as 1 and 1, it forms a hieroglyph representing perfect balance. This number can also be viewed as the world in its completed state (10) being governed by the divine intelligence (1).

Hence, in terms of Numerology the Justice tarot card brings incredibly powerful messages of truth and balance to a tarot reading.