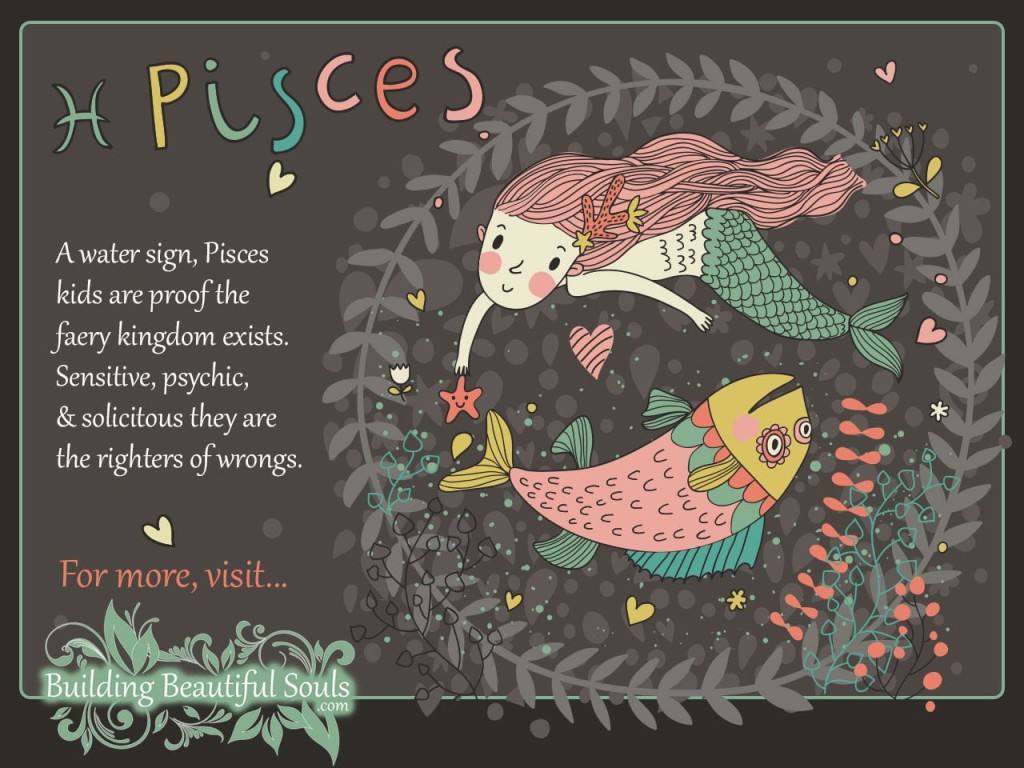 If faeries were water dwellers they would all be Pisces.

Fragile, sensitive and elusive, those born under the Zodiac Sign of Pisces are shimmering souls filled with empathy, compassion and love for all.

Add the emotional openness of a child to the Pisces’ profound psychic abilities and this little Star Sign inherently becomes a walker between two worlds – gliding in between the material plane and the all-that-is beyond The Veil.

Because in the world of spirit there is no suffering, The Fish seeks the safety of its hidden alcoves and stows away there as much as they can. When they can be coaxed back into this reality, Pisces brings the ideas for inventions and great works of art as were whispered to them by The Universe during their trip to the other side.

If your Pisces child could write you a letter before he or she is born it might read like this:

“Dear Mom and Dad: This is your future Pisces baby thinking to you from the womb because I know I’m on your mind. How do I know that? I just do, and that’s something that you may find difficult about me growing up. I will always “know things”, even subtle nuances. They are as clear to me as the sky above. I’m sorry for seeing or feeling and just blurting it out. It makes people uncomfortable. Actually, you’ll hear I’m sorry a LOT from me. Somehow I feel responsible for even uncontrollable things.”

Pisces, in general, are extremely sensitive – but children even more so.

The tiniest changes in their environment impact them in huge ways. They’re very caring and concerned, and will always be watching out for other people (or animals) that they see as vulnerable.

What your little Piscean doesn’t realize is that he or she is part of that group. This child will put a bandage on the stuffed teddy bear before worrying over the cut on their own knee.

After learning of their error, the Pisces child may put themselves in a time out, which is their way of processing. Eventually they’ll emerge and do the right thing, looking to you for that much wanted smile of approval.The Piscean soul wants to please, which makes your parenting job a little easier. Yelling isn’t necessary with these children. When they do something wrong, let them know how to “fix it” and give them the supports necessary to do so.

Piscean offspring sometimes become loners out of necessity. The intensity of their emotions can lead to sensory overload. Other children may think that your little one thinks themselves “too good” to hang out.

Nothing could be further from the truth.

This child struggles with self-worth, but also knows that the stage of life has curtains for a reason. Just don’t let them hide behind that safety net too much at home or they could have trouble building strong bonds later in life.

Your Pisces child is wise beyond his or her years, and may well be an old soul. You may hear this sagacity in a story they create, or see it in a painted image. This is one way that Pisces children communicate ideas and visions, even if they may not recognize them fully yet.

And don’t be surprised to discover your child having very long talks with imaginary friends that may NOT be so imagined. This zodiac star sign has a very high propensity for psychic aptitudes.

What may prove difficult for you is that little Pisces has a rich imagination. It takes an astute parental eye to know what is real, what is “possible” and what is completely fabricated.

That fanciful element in Pisces often leads them toward arts that allow them to immerse themselves in another world – such as reading fantasy books or watching/acting in plays. Join them in those realms – it proves delightful for everyone.

On the home front the best gift you can give the Pisces child is an abiding sense of love, peace and nurturing. They tend to give generously to others – it’s your job to refill that well.

It’s a good idea to help them create boundaries, especially with people who would use their kindness thoughtlessly. When you accomplish this, you’re setting your Piscean on a path of self-reliance where they can endure much more than anyone anticipates.

The female Pisces child is part elf and part Hippy. Her spirit may well have been playing in Neverland before returning to the Earth Realm (or some equally whimsical reality). As a baby she is cute as a button, but over time often learns how to use those proverbial baby blues to get what she most wants. Effectively, she wins you over with abundant charm and sweetness.

Keeping your little one entertained is very easy thanks to her rich imagination. You know the children who like the empty box more than the gift? That is frequently true of Pisces. She’ll turn that box into a space ship, a castle, or a jungle without having to use much more than a few props (if that). Make believe is definitely among this girl’s favorite pastimes as is dress up. And don’t think she’s going to get all girly all the time. There’s a tom boy inside most Pisces girls that wants to climb the tree so she can envision her next tree-house!

As she grows, pay close attention to your daughter’s dreams. Many Pisces have prognosticative dreams, some of which may frighten her. This is not about the monster in the closet Mom and Dad (although you probably have one of those too), it’s about her innate ability to tap into the ebb and flow of life’s tapestry. This advice holds true with things that she states with certainty. For example, she may walk in a room and say to visiting family, “Uncle Frank you don’t feel good – what’s wrong.” Uncle Frank turns gray because he hasn’t said anything about his medical condition! In this, your little Piscean is a true seer, but if she fears her gift it may be lost never to return.

Ultimately the lesson from your daughter is that spontaneity is GOOD. At home or among friends at least not everything has to have a pat time and place. School is another matter. You may find that particularly during teen age years your daughter’s way of learning isn’t exactly rote. Even without that, She’ll take to highly philosophical or theoretical subject matter like a fish… well, to water! What she cannot abide is nasty or pretentious peers, which may lead to some social isolation. It is easier to read a book than fight with a foolish foe. Alternatively She may seek out adult companions (even, egad, Mom and Dad) for that social outlet.Being a water spirit, Pisces cry – and they cry with their whole body. There will be times when you wonder if there is a whole ocean in their pillow. This is far more likely than temper tantrums for her, and dad in particular finds it nearly unbearable. There is a time to stay firm, a time to commiserate and a time to give in. You don’t always have to be structured with the Pisces child and still get positive results. In fact, making new and unique routines really feed the Piscean mind and spirit. They’re not big on dull, boring “rituals” and when forced into them, they will find a means of changing everything to their liking.

Your Pisces boy has come into this world with a never ending supply of idealism and curiosity! As soon as he can start experiencing the world through his senses your child will be very “hands on” (he will give whole new meaning to child proofing). He will also have 101 questions to the point of exasperation for the adult who doesn’t necessarily see the world through Piscean eyes (and ears, and nose… did we mention these children relate to the world strongly through their senses?).

Your boy will love nature and be moved by the tiniest of harm that comes to stray bird or cat or whatever. Unlike some boys, the Pisces man-child DOES indeed cry when he comes face to face to a perceived maltreatment or injustice. Don’t squelch that. He needs a release from the emotions that fill his body. Like too much water going into a cup, the feelings have to come out somewhere. Without this, a Piscean can become very remote and gloomy, or worse end up eventually exploding then struggling with guilt for months afterward.

Like a Piscean daughter, young men will dream dreams and have rich imaginations. The stories of knights and dragons, spaceships and aliens – these are the bedtime stories they’ll request again and again (or DVDs during the day). Oh, and just go ahead and buy a book light right now. You’ll find piles of stories under his bed complete with a flashlight anyway.

Tween and Teen Piscean boys rarely become bullies. If anything they turn into school yard diplomats. They don’t like being in charge, but dislike conflict even more. If that plan doesn’t work out, they seek the company or advice of trusted adults or make a well-considered retreat. These children are older than their years betray.

Speaking of retreats, your son may not always communicate his frustrations verbally. A nasty verbal encounter at day care or study hall could turn into resistance to return to that setting. This is one of the harder issues for the parents of the Piscean – at some point or another you have to let him see the REAL world, not just the perfect world that his soul craves. Just keep the quantity of exposure tempered with your awareness of his sensitivities. The hour long video game may sooth his heart and mind – 5 hours, on the other hand is not a healthy way of dealing with life’s issues.

As a family one of the best activities for you and your son is travel. While Disney may sound like the easy choice, it’s also a GREAT choice. There is an adventure sure to engage the Piscean mind and give them weeks of pleasant dreams.

The caution for the family of the Piscean boy (and some girls) is that they will be attracted to other forms of escapism the older they get. Be watchful for drugs and alcohol and provide plenty of alternative activities to keep him rolling in a positive direction.