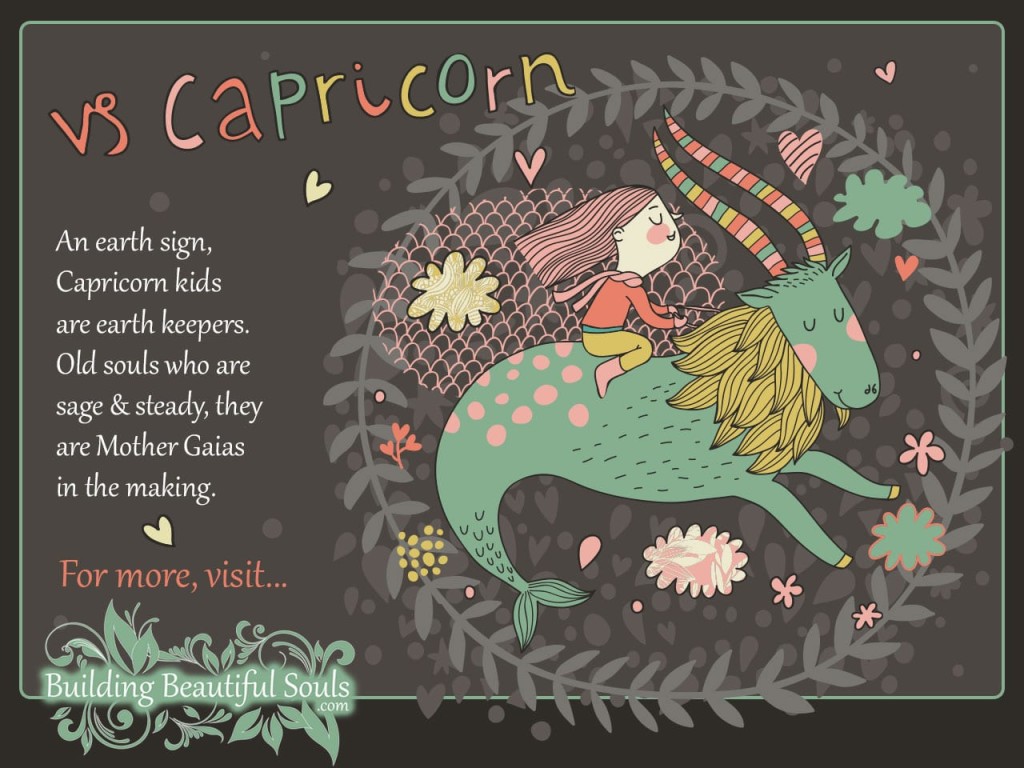 There is the theory that we are all children of the stars. That the atoms in our bodies were created from stars of old.

Just as Gaia cradles us in her womb – looking upon us with a knowing smile and patiently waiting as we find our own paths to wisdom – this, too, is the way of the Capricorn child.

Even as kids Capricorns are the immovable, unflappable foundation of the family unit.

Capricorns come into this world with a mind much older than their body.

Light workers tell us that many are old souls that expect a great deal from this incarnation.

This means that your Capricorn child will always strive to do his or her best, and will chastise themselves heartily for any perceived shortcoming.

The desire for perfection runs deep in a Goat’s spirit. They know they were born to reach the mountaintop or die trying.

Don’t berate them when failure rears its ugly head (they beat themselves up enough). Rather, remind them that practice and effort eventually leads to the success they crave.

Also don’t worry when your little Capricorn makes solo efforts. They want to at least try to resolve things alone. When they get stuck, they’ll come back seeking advice without prodding.

Your Capricorn child loves consistency. They don’t like changing schools or moving, but they adore tradition. Continuity in this child’s schedule is actually a comfort for them. You don’t have to worry about having a schedule and sticking to it.

In fact, they’ll likely remind you!

During down time your little Goat will be more than content to go outside and amuse themselves with the trees. If it’s in the company of friends, all the better.

Nature is the Capricorn’s playground. Being outside nurtures and fills them, and it’s also where he or she retreats when needing to think or process changes.

Don’t be surprised to find your Capricorn child attracted to athletics. They’re ambitious and love moving. Running to and from school rather than taking the bus wouldn’t surprise us.

When not involved in a pastime, they’re quite content to be with parental units. Mention “take your child to work” day and watch their eyes light up. They may also find themselves attracted to music that has a strong beat.

As your child develops you’ll begin noticing a tendency toward a very strong work ethic. This is perfectly normal for your Capricorn, but sometimes they need to be reminded to play.

Their diligence consumes them and before they know it hours elapse. Combine that with the Capricorn’s ambitious streak and you find yourself with a resolute, highly productive child.

With the Earth element governing your little goat, they approach life as a business deal. They prefer logic to emotion and often show remarkable wisdom to those with an ear to listen. Blend this together with a keen wit and imagination, and you truly have a delightful child on your hands!

One thing that parents of a Capricorn girl notice as soon as she develops a personality is that she really isn’t a “kid”.

And as with most adults, that also means that your Capricorn daughter might prove obstinate and set in her ways even as a toddler. When challenged she puts her head down like a goat ready to charge with horns blazing.

A Capricorn girl redefines the idea of changeability. Most time she will be happy and carefree, but there is another side to this picture. The melancholy Capricorn is a very sad thing to behold.

Be ready to give her extra love and attention during these down moments. Realistically, there are so many other positive traits in your Capricorn daughter that this little hitch isn’t much.

She’s not prone to peevishness or high maintenance, and won’t fight you over your choice of wardrobe, play things or even dinner.

Your Capricorn girl loves to organize. Let her at the plastic ware or the lazy Susan!

Tasks like this feed the natural Capricorn desire to have her environment under complete control. She also appreciates having a consistent routine particularly in the morning. When disrupted the lack of continuity puts the sure-footed goat off balance.

The maturity of your daughter means she’s naturally attracted to older children and adults as friends. Her ability to communicate on the same level as these people makes those pairings relatively successful. Once a Capricorn chooses a friend they hold on tightly, often keeping in touch for years to come.

At play time your daughter prefers doing something she feels has a purpose. She’d rather putter in the garden than play tag any day. In fact, the garden is an excellent spot in which to set up a special spot for her with a chair, a weather proof cubby for favorite books etc. She’ll use that space for everything from studying to pondering life’s mysteries.

At school your Capricorn girl should do well, but may sometimes miss deadlines. That’s because she has her own idea about timing and approach. She’s meticulous, so things take longer than they otherwise might. Nonetheless this child takes her responsibilities seriously and doesn’t require constant nagging to complete tasks.

By the time she becomes an adolescent you’ll discover a girl who actually appreciates good manners. She’s dependable and trustworthy without being arrogant about it.

She may take time to warm up in new relationships (there’s a bit of a wallflower here), but once comfortable her intelligence and maturity shine brightly.

The male Capricorn child craves security. He appreciate parents who show respectful authority and who don’t “dumb down” their conversations. Similar to the Capricorn girl, boys are born old.

They never really seem like a little kid. Rather than wool gathering your Capricorn boy ponders personal goals and how to bring them into reality.

Like The Goat this sign portrays, your little boy will be very achievement oriented but without neglecting the family. He seems sure footed in everything he tries. No matter where he starts his trek on the mountain, he reaches pinnacles faster than his peers. All the while your son says composed without a shoelace out of place as if he’s done this walk 100 times before.

The only thing that shakes a Capricorn’s balance is when they feel misrepresented or ridiculed. That will knock him off his game, sometimes for weeks. A good dose of appreciation from the parental units can be very helpful during these times.

In group settings your Capricorn son is Mr. Manners. He enjoys the finer things in life and already understands that etiquette and a tidy appearance is one way to manifest those things. Even all dressed up, though; there remains an air of uncertainty about her attractiveness.

Remind him that he’s quite dapper and the wavering confidence goes back to rock-solid.

One surprising thing about Capricorn boys is they’re tidy!

Unlike many boys who don’t even notice the socks they’re wearing are different colors, this sun sign’s room is always looks neat and organized.

The Capricorn mantra is “a place for everything”.

Do not go shuffling your son’s things around even if you don’t quite understand the order he’s created. It’s a comfort zone for the Earthy Capricorn and taking care of it is a source of pride.