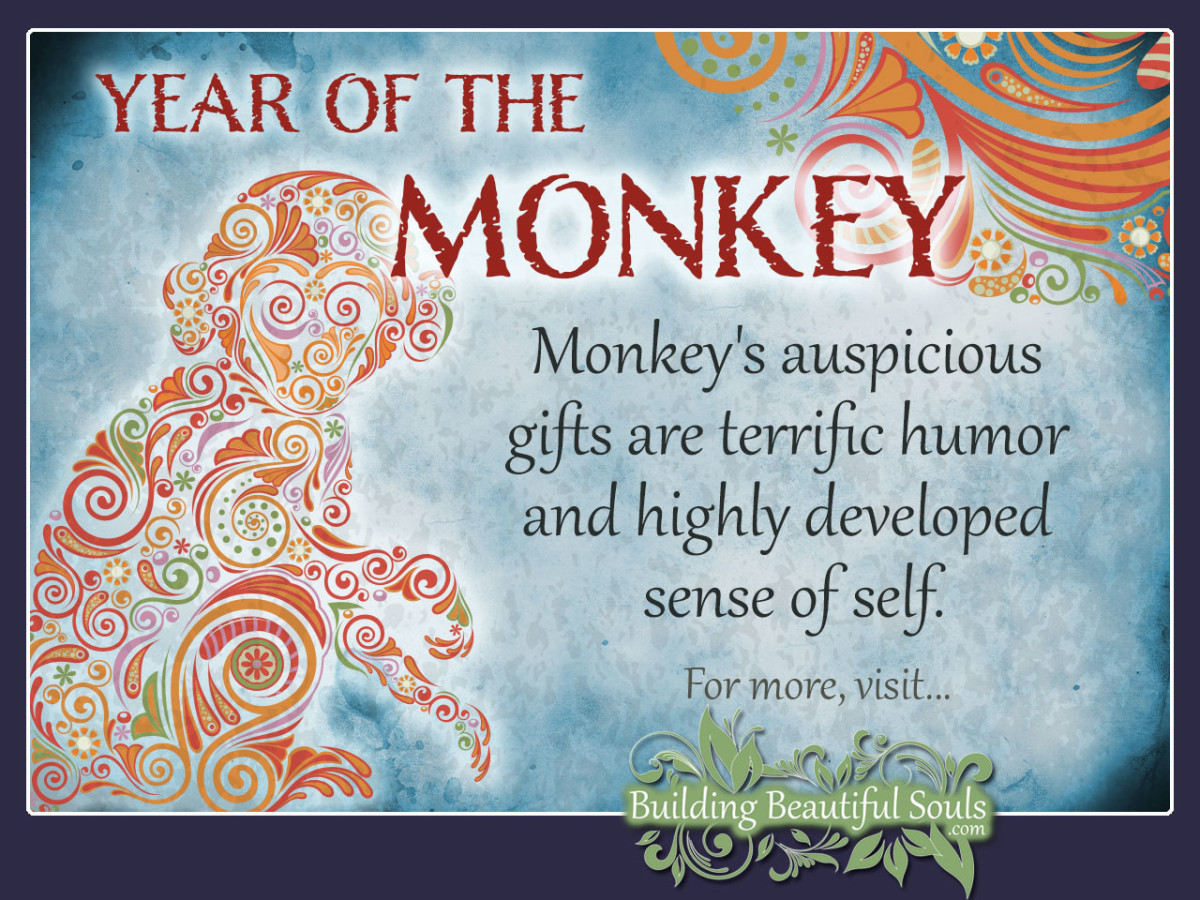 Of the Chinese symbols, it is The Monkey who is best known for their sense of humor and high IQ!

Those in born in the Year of the Monkey are utterly and impossibly charming and can turn watching paint dry into the social event of the season.

For all the hilarity this Chinese zodiac animal can bring into the lives of others, they should never be mistaken for being a fool. The Chinese Monkey is supra-intelligent and capable of immense periods of incredible focus.

Chinese Zodiac Monkeys thrive on competition, taking as much delight in their own impressive skills and abilities as they do in life itself. Their confidence is so strongly developed that even if someone verbally attacks them it simply goes in one ear and out the other.

In this, though, the Chinese Monkey has the uncanny ability to truly see what about their thoughts, words and deeds needs to be improved and they will move heaven and earth to do so.

Of all the Chinese zodiac signs, it is the Monkey who most desires to enhance his or her “self”.

In the 12 Chinese animals it is The Monkey which makes the best business people. They exhibit true genius and woe is any other Chinese zodiac sign who tries to best The Monkey.

Monkeys are so clever and intuitive that they will see and act on an opportunity before others have even had time to blink. Because of this and their considerable ego, the Chinese Monkey spends their entire lives being misjudged as untrustworthy and are plagued by the jealous actions of others.

At their worst, these Chinese animals can be ego-maniacal in the extreme. They believe they deserve more than others because they’re smarter, funnier and quicker.

On the rare occasion a Chinese Monkey is backed into a losing proposition, whether it be business or personal, they will resort to unethical if not illegal means as long as they can extract themselves from the situation.

Scroll down to find your birth year. This will tell you which “type” of Chinese Monkey you are and help you to learn more about how the combined energies of the fixed and secondary element impact your life.

The Water Monkey is more sensitive to other’s needs and feelings than are the other elemental types of Chinese Monkeys. Water in their chart also makes these Monkeys extremely sensitive in regards to their own emotions and, though they will rarely show it to the outside world, the Water Monkey wounds deeply and easily.

Those born in The Year of the Water Monkey are a bit more settled and patient than the rest. Further, they are less selfish in nature.

Just as all rivers flow into the ocean, The Water Monkey has a larger sense of purpose, sees the bigger picture and is driven to cooperate and compromise for the greater good of all.

Those born in The Year of the Fire Monkey are confident, truthful and imaginative.

The quest for power and control is what drives the Fire Monkey and they are a force to be reckoned with. They also have an almost overpowering need to have the upper hand even if they are not in control.

The fire in their chart takes this Chinese Monkey’s already rabid amorous pursuits to levels undreamed of by most mortals yet they are truthful when expressing their emotions.

Metal in this Chinese Monkey’s chart greatly increases their already, almost obsessive desire for success in business and the financial wealth that comes with that success. The Metal Monkey is practical and hard working, opting for frugality and wise, conservative investments.

With an upbeat attitude and positive outlook on life, the Metal Monkey who can sell the proverbial ice to the Eskimo due to their exceedingly charming personality.

Those born in The Year of the Metal Monkey are warm, passionate and the most likely Monkey to be loyal in a romantic relationship.

Wood Monkeys are natural explorers who love to see what’s over the next horizon. This Chinese Monkey loves challenges and actively seeks them out. They spend an inordinate amount of time finding and implementing ways to grow personally and professionally.

Those born in The Year of the Wood Monkey have a great mystique surrounding them. They are known for their inexplicable ability to see into the future, accurately predicting events.

The Earth Monkey’s personality deviates quite a bit from the other elemental types of Chinese Monkeys. The Earth Monkey is calm, has a genuine concern for others and works hard to make sure they are always above reproach.

Whereas the other types of Chinese Monkeys show the tendency toward selfishness, those born in The Year of the Earth Monkey have virtually no ego. They are selfless and completely devoted to helping any soul in need.

Those born in The Year of the Monkey are most compatible with the Chinese Rat and the Chinese Dragon.

Chinese Monkeys are capable of true and lasting love but likely will go through many lovers until they find “the one”. They are the most promiscuous of the Chinese zodiac signs and can be very manipulative when pursuing a potential lover.

This Chinese zodiac animal bores easily so they partners who are willing and able to constantly invent ways to keep them stimulated emotionally, physically and mentally.

Chinese Monkey children are the most active of all the Chinese zodiac kids. They are usually in a jovial mood, work hard and play even harder.

These ambitious children are knowledge seekers as they have an innate knowing that knowledge is the key to power and consummate power is what they want. To that end, Chinese Monkey children will resort to unethical plotting and scheming to get whatever it is they set their sights on; and they want everything (even if it belongs to someone else). Additionally, these children are willing to share what they have but not until they’ve sized up what their reward is for doing so.

Finally, Chinese Monkey children are not rule followers; not because they deliberately rebel, but, rather, because restrictions of any kinds simply does not register in their consciousness.