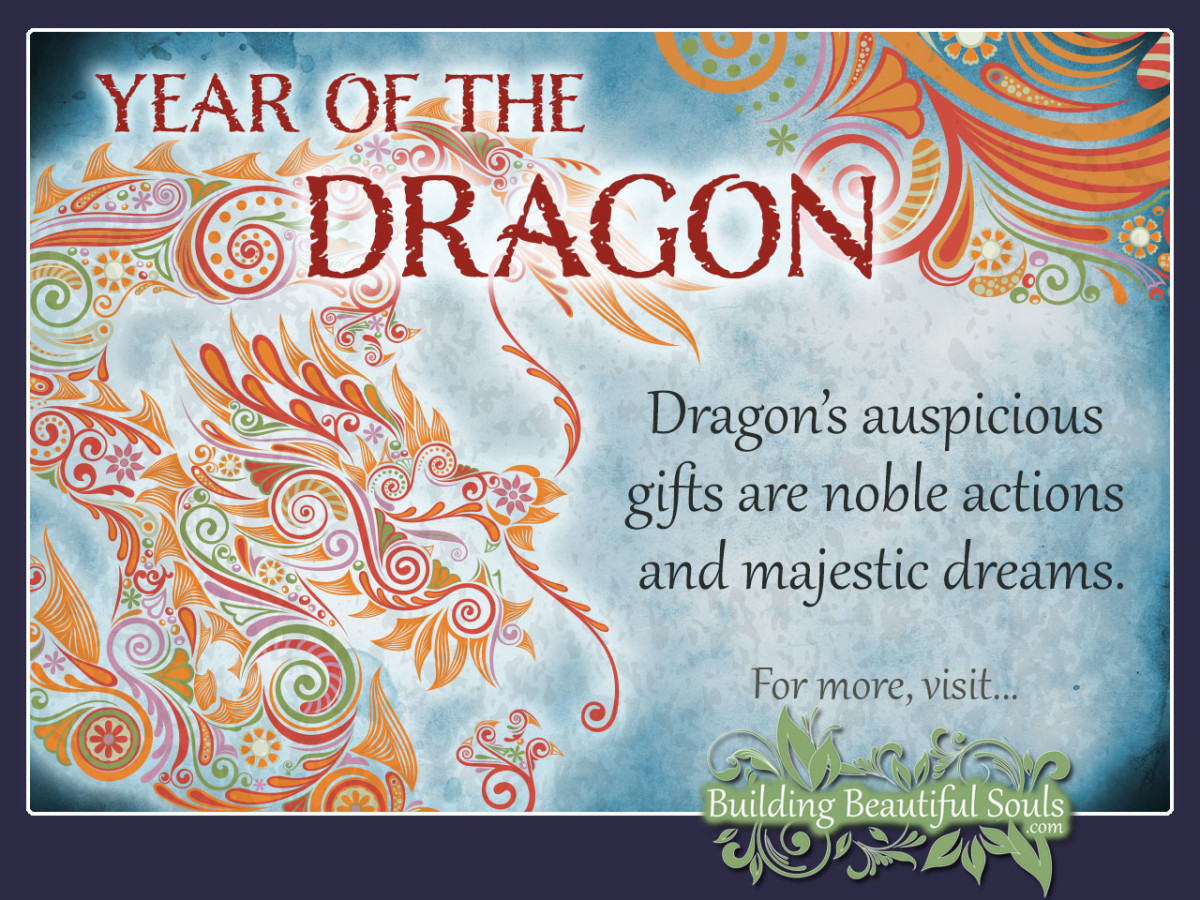 One of the most archetypal Chinese symbols, Dragons are the guardians of wealth and power which is why the Emperor of China uses the Dragon as symbolic of his imperial power. Chinese Dragon symbolism tells of the Dragon’s control over all water (floods, hurricanes, rain, etc.).

Larger than life, the Chinese Zodiac Dragon has the courage, confidence and capacity to achieve legendary successes. The Chinese horoscope chart for this zodiac sign usually promises a rich and full life filled with many an adventure!

Of all the Chinese animal symbols it is the Chinese Dragon (and Chinese Snake) whose very existence is full of the most ancient mysteries. According to Chinese Astrology their whole reason for being born is purely karmic. They’ve each arrived in their respective years (Year of the Dragon and Year of the Snake) for the express purposes of settling debts (whether they owe or are owed). In this, they can be considered the oldest souls in the Chinese Zodiac.

The Chinese Zodiac Dragon has an unfathomable supply of energy. They are most inspired by their own fantastical dreams and ambitions. Though unwaveringly honest and fair this Chinese zodiac sign will stop at nothing (not even the promise of death) to accomplish whatever mission they believe they have in life.

There is no hidden agenda with the Chinese Dragon. They do not have the capacity for deceit and can be read like an open book.

The Chinese New Year Dragon is its own worst enemy. Because they do not believe themselves to be mere mortals they, also, believe they need not concern themselves with the laws set forth by the puny likes of mankind. In this, failure of any kind can be epic – truly epic.

When angered, the Chinese Zodiac Dragon is truly capable of laying scorched Earth but does not stay angry long and is likely to be nursing your wounded heart seconds after having rained fire down all around.

Scroll down to find your birth year. This will tell you which “type” of Chinese Dragon you are and help you to learn more about how the combined energies of the fixed and secondary element impact your life.

True to the symbolism of their element, those born in The Year of the Water Dragon are more “go with the flow” kind of personality. Though still a force to be reckoned with but this Chinese zodiac animal concentrates inwardly, concerns themselves with matters of their own and truly believes in a ‘live and let live’ world.

Water as their element makes these Chinese Dragons believe nothing is impossible and they will take great risks trying to achieve every dream all at once.

Adding the element of fire to the already highly combustible Chinese Dragon personality is like dropping a bomb on a forest fire then dropping tons of gasoline on it just for good measure.

The drive to win and be the leader is so acute in the Chinese Fire Dragon, they can easily succumb to developing the notorious ‘God Complex’.

However, the flip side of this is that those born in The Year of the Fire Dragon are the quintessential humanitarians. They want to and do believe that everyone is capable of great achievements. Further, they will do all within their power to aid them in making their dreams come true.

The Earth Dragon is the more realistic of the Chinese Dragons. Less likely to ignite at a moment’s notice, they are more levelheaded and actually enjoy hearing other people’s opinions and ideals.

This Chinese zodiac sign is the strong, silent type yet outgoing and fun when they choose. Those born in The Year of the Earth Dragon are great organizers who love to be the leader but will be reasonable if they are not.

In constant pursuit of the highest level of self-development and human performance, the Earth Dragon will toil endlessly to obtain self-actualization.

If you want something done, get those born in The Year of the Metal Dragon to do it for you.

Imagine if the Chinese Dragon’s scales and soul were made out of the most impenetrable metal and you might get some sense of just how tenacious (fanatical even) they can be when they want something or someone.

Those who have the backbone to challenge the Metal Dragon (or any Dragon for that matter) are given the utmost respect (but should still be prepared for a ferocious fight).

Solid and steady, the Wood Dragon is a thinker who takes their time to explore every angle of whatever subject matter is at hand and is ruled by logical thought processes. Not as tempestuous the other Chinese Dragons, they work well with others, even when someone else is leading the group.

Those born in The Year of the Wood Dragon are the most verbose. When opposed, they will debate/argue ‘to the death’.

When the Chinese Zodiac Dragon says ‘I love you’, what they really mean is, ‘you are my chosen throughout all time and space’. Those words are a sacred vow to honor, support and cherish their beloved for all eternity and one may trust in them wholeheartedly.

As long as this Chinese zodiac sign’s mate remembers to stand back a bit and always let the Dragon have their say (no matter how long it takes for them to get it all out), there should be little conflict. But if the Chinese Dragon should blow, duck and run for cover. The explosion will be brutal but you can trust it will be over quickly as they never stay mad for very long.

The Chinese Dragon is most compatible with the Chinese Monkey, Chinese Rat

The Chinese Dragon child is a force of nature. Vivacious, courageous (devoid of fear, really) and intense, these little ones are a true joy to know. Forming their lofty morals and principals early, the Dragon baby, rather than wearing diapers, might as well just get fitted for a suit of armor and prepare for their life of gallantry and epic quests.

The Chinese Dragon child might be a Knight of the Round Table on the outside (even if it is a girl) but on the inside they can be total marshmallows. Their pride is a precarious thing and they are their own worst enemy. They will be harder on themselves than anyone else ever could be. When wounded, these children can suffer emotional scars that can last a lifetime, leaving considerable scarring, so be vigilant over your little hero.