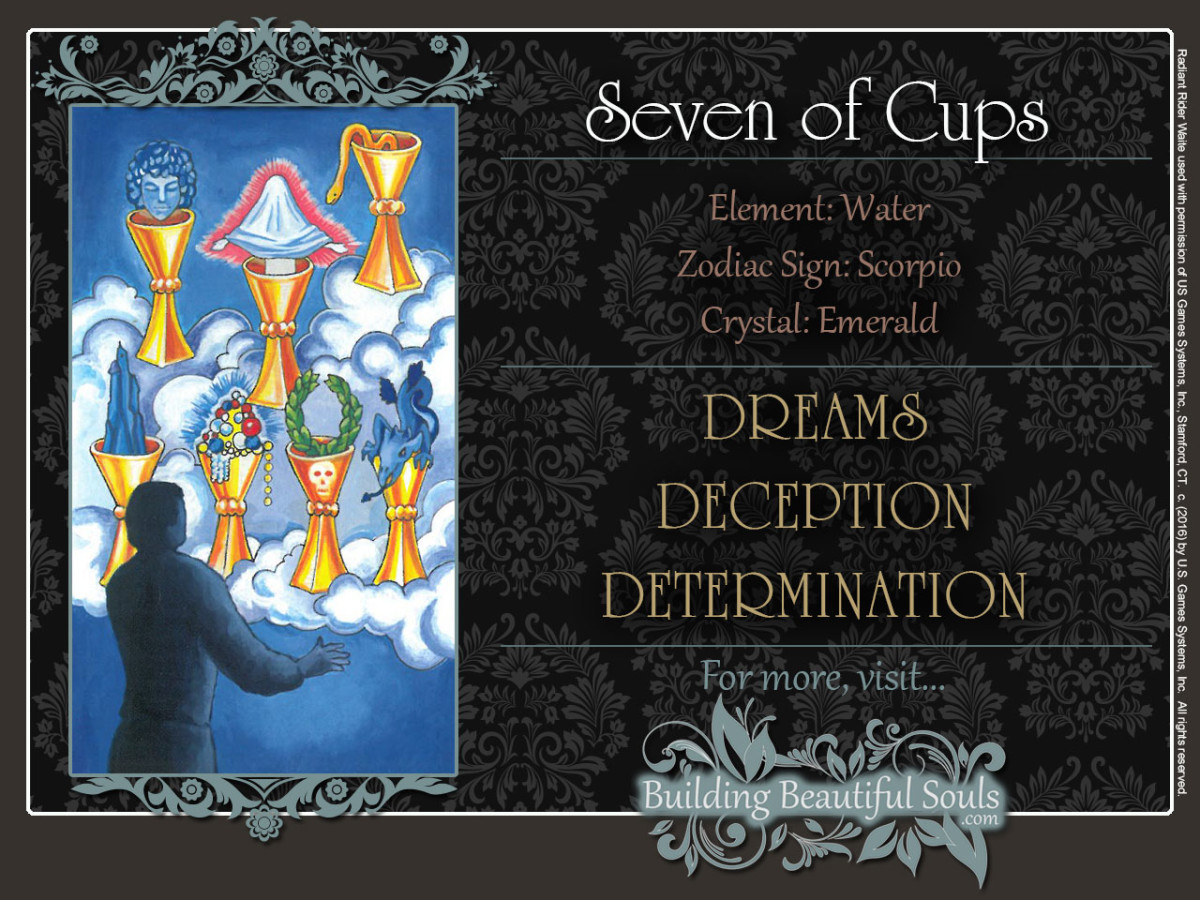 The Seven of Cups Tarot Table of Contents

Passion is the fuel that powers the engine of your ambition. But you must channel it wisely, or it will consume you warns the Seven of Cups.

It’s a lot like gasoline. Put it in your tank, and 15 gallons will take you from New York City to Philadelphia with enough gas left to explore the city. Spill it on the ground, and you have created a very dangerous situation.

While it’s important to be keenly aware of your desires, it’s also crucial not to become wrapped up in them.

Our most ecstatic fantasies are fun only as long as they stay in the realm of fantasy.

Oh, you’re thinking a passionate affair with your sexy coworker would be awesome? Your spouse and kids may have different ideas about that. And if that dream becomes a reality, the ensuing divorce and custody proceedings will turn that dream into a larger than life nightmare!

That’s why Kabbalists call the Seven of Cups tarot the Lord of Illusory Success! Here, Venus in Scorpio infuses the consciousness with overpowering emotion. Have you ever wanted something so bad, you could literally taste it? Literally? That’s the energy of the Seven of Cups card.

But in the end, it may be all just smoke and mirrors.

Clouds on the Seven of Cups symbolize divine communications in the other tarot suits. But in the suit of Cups, they often warn of illusion and self-deception.

The cups on the left are filled with symbols of material fulfillment: sex, security, and wealth. The ones on the right of the Seven of Cups appeal to your emotional needs: knowledge, power, and success.

But the cup in the center of the Seven of Cups is the most dangerous one of all: It contains the illusion of spiritual enlightenment. The female figure in the cup is veiled, like the High Priestess in the Major Arcana, but her red aura shows that she is only a projection of your own desires.

Believe it or not, telling the difference between illusion and reality is easier than you think. If it’s real, it will still be there tomorrow.

The Seven of Cups is a powerful opportunity to learn a great deal about yourself. It’s definitely a test of your character.

Like the Moon in the Major Arcana, it allows you to explore your wildest, most exotic fantasies without having to worry about the real world consequences. Writing your discoveries into your journal or expressing them artistically will be very instructive.

But The Moon represents a natural stage in your spiritual progress. If you don’t resist its pull, it will intuitively lead you to a higher spiritual awareness. Not so with the Seven of Cups card!

Whether your experiences here will lead you to a higher understanding – or anywhere at all – depends on how accurate your moral compass is. What you do with the energies in this card is your responsibility alone.

The Seven of Cups is often accompanied by powerful, almost overwhelming emotions. If you’re not in touch with your feelings – if you don’t have a very clear sense of who you are – this may leave you vulnerable to those who may not have your best interest in mind.

The Seven of Cups suggest that you delay important decisions until you have a clearer view. If financial or romantic opportunities seem too good to be true right now, they probably are. This is not a good time for making commitments you can’t back out of later.

If these opportunities are the real deal, they’ll still be there tomorrow.

If you are receiving communications from the spirit world, take them with a grain of sand. These communications are usually highly symbolic and emotionally charged. It often takes years of reflection and a cool head to sort them out and interpret them correctly.

Think of all the end of the world predictions people have made over the last few years.

Even when they mean well, spiritual beings will often play on your baser desires. If they tell you things you want to hear, you’ll keep the lines of communication open longer. Spending too much time with the spirits can make you “spirit drunk.” Like a plain old vodka drunk, it can impair your judgment, just like the figure in the Seven of Cups card whose obsession has turned him into a mere shadow of himself.

When the Seven of Cups card is reversed, all those all those dreams and fantasies are poured out onto the physical world. They can transform you or overwhelm you. Or they can simply dissipate – like soap bubbles.

How they affect your everyday life, depends on what these visions are and how you react to them.

Instead of outright dismissing them, you can do something useful with them. Throughout history, many great women and men have been ridiculed as dreamers. But they believed in themselves. More importantly, they believed that their visions contained something valuable. Instead of listening to the naysayers, they went about to move the world forward by leaps and bounds.

Your dreams can allow you to tap into enormous reservoirs of resources you may not have known you had.

The downside is that all this energy can overwhelm you. Instead of using them as tools for enriching your life, you may decide to give in to temptation by using them as an escape from the challenges of the real world. If you do that, you’ll be wasting precious time.

Be sure to keep your feet firmly planted on the ground.

Some fantasies simply dissipate when they are confronted with the cold, hard facts of real life. It’s part of growing up. Yes, a beautiful dream may have come to an end. But there’s no need to become cynical. The upside is that you are now filled with a sense of clarity and purpose.

And the real world can be every bit as exciting as your wildest dreams.

Kabbalistically, sevens are associated with the passionate and excitable nature of Venus. In traditional Numerology, 7 corresponds to intuitive Neptune. While it’s good to have visions and dreams, be sure that you can find a way to ground them in reality.