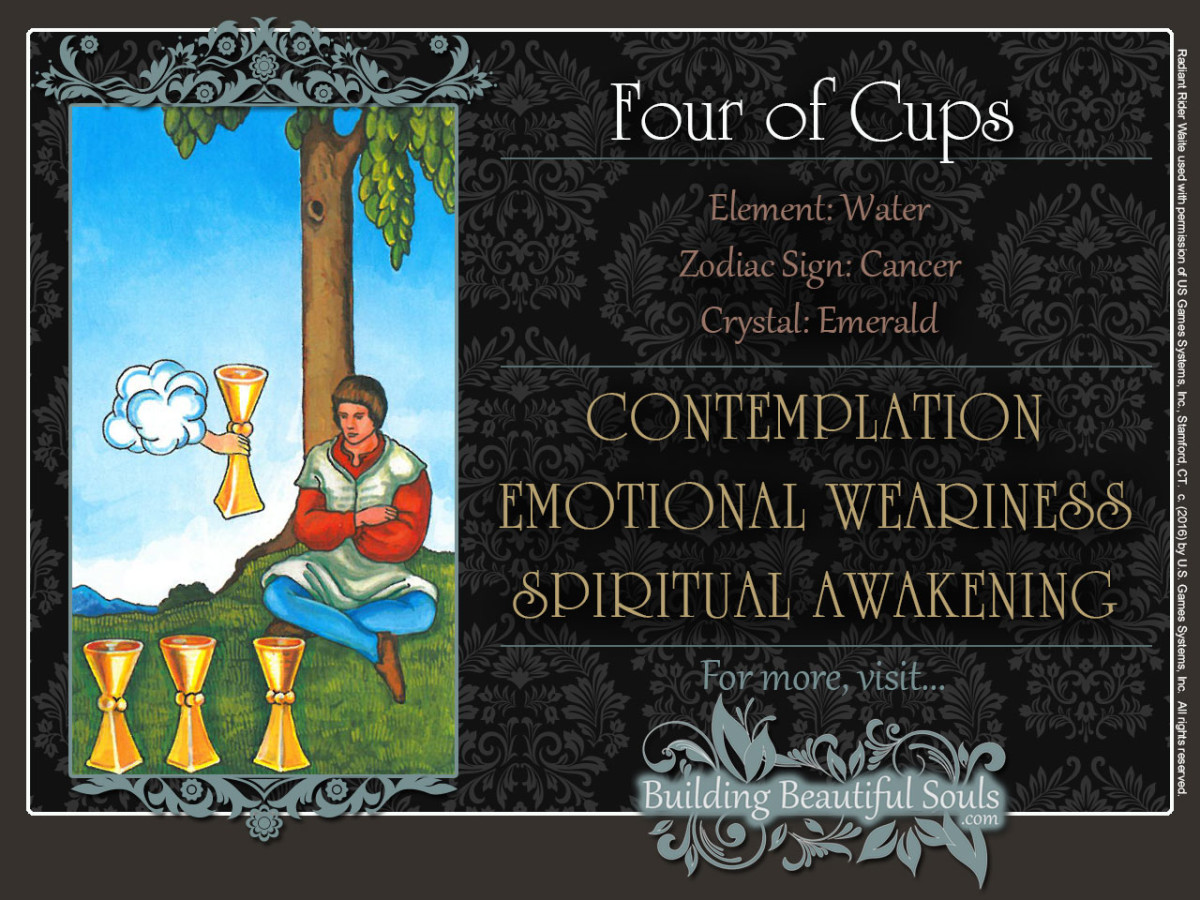 The Four of Cups Tarot Table of Contents

Nothing is perfect. The sooner you realize that, the happier you’ll be.

The Four of Cups embodies the energies of the moon in Cancer, called the Lord of Blended Pleasure by Kabbalists. Feeling a strong pull to journey within, you question the value of things that have brought you joy so far.

Instinctively, you know that you need get in touch with your feelings.

The question is: Are you getting in touch with your feelings, or are you living in them?

The young man in the Four of Cups card is sitting under a tree on a green, fertile hill. The scene on the Four of Cups tarot definitely looks a bit like young a Buddha meditating under the tree of enlightenment. But look at his glum expression. And note that his arms are crossed.

Is he meditating or is he pouting?

One thing is certain. He’s not enlightened yet. When the Buddha had achieved enlightenment, his hand touched the ground to show Maia, the personification of illusion, that the earth was his witness.

But don’t give up on him just yet. He can still get there. Just bear in mind that from here, things can go either way.

Wearing blue, red, and brown in the Four of Cups, subconscious emotions are filling him with a sense restlessness, making him dissatisfied with his current achievements.

In the Four of Cups tarot, the tree’s symbolism is as ambiguous as the man’s body language. A tree can symbolize growth and stability. It also provides shelter. In a sense, it’s a refuge from the troubles of the world.

How much time you spend in its shade and what you accomplish on your inward journey will determine whether the Four of Cups brings a message of growth or stagnation.

The fertile hill on which it grows signifies physical accomplishments and material comfort. The grey mountains in the background of the Four of Cups, however, suggest a feeling of emptiness and a yearning for higher truth.

The cups on the ground are things that have given you joy and pleasure in the past.

The challenge in the Four of Cups tarot card is sort out whether the cup being presented to you out of mid-air is a higher inspiration or a pipe dream.

You seem to be having one of those days when all you feel like doing is sit around the house and hum a sad song. If you even feel like talking, you’ll probably have one of those gloomy philosophical conversations.

You know, the ones that start with, “Have you ever wondered what the point of all this is?”

Yep, the one that gets you standard reply number 57, “Dude, what’s eating you?”

It may be nothing. Perhaps, you’re just exhausted. Or bored. Or both.

And if this is a case of good, honest exhaustion, the Four of Cups is telling you to relax a little. Okay, after the recent excitement you’ve experienced, this cosmic time-out may leave you restless and bored.

But relax, anyway. You need to recharge your batteries.

You’ll be no good to anyone, if you burn yourself out completely.

Burnout can play harmful games with your mind. It can easily turn into frustration and discontent. If you allow it to take over, you could be tempted to throw in the towel at a moment when your whole hearted dedication to a project is required.

Check your satisfaction level. Are you pleased with where you are in life? How happy are you with your accomplishments?

If you think the grass may be greener on the other side, you’d be wise to take a look first. In the Four of Cups card, that other side is a cold and barren mountain, not the cozy green hill you’re sitting on.

Look closely at what you have right now. Do you appreciate its true value? Are you grateful for it? Weigh your options carefully before you abandon it for some pie in the sky scheme.

The Four of Cups card may also suggest that you’re not being entirely honest with yourself in spiritual matters. For example, do you talk about how good a meditator you are instead of just meditating? You may have a huge library of esoteric books. That’s impressive, but how many of them have you actually read?

Disillusionment is not a bad thing, at all. Yes, nowadays it’s all the rage to equate it with bitterness or the sense that you’ve been cheated.

When that elusive cup of “could have been” is gone, the only thing that remains is what’s truly there. What could have been didn’t exist to begin with, and what’s there is more than you thought.

Oh, and it’s definitely much more than “could have been.”

Okay, you may have decided to put your plans for writing the Great American Novel on hold for a while. In the meantime, you have landed an awesome job that’s making you happy in more than one way.

If you feel you’ve been stuck in a rut lately, you can breathe easier now. Those obstacles blocking your path have been removed. Buckle up and adjust your rear view mirror one more time. The journey is about to continue.

Your subconscious mind is feeling more comfortable with the recent changes in your energy field now. Anxiety, boredom, and restlessness are giving way to a comforting peace of mind. You are beginning to understand the difference between mere “gut feelings” and genuine psychic impressions.

Kabbalistically, fours are associated with Jupiter’s generous nature. In traditional numerology, they are attributed to intuitive Uranus. Because a square has four sides, this number is also associated with earth.