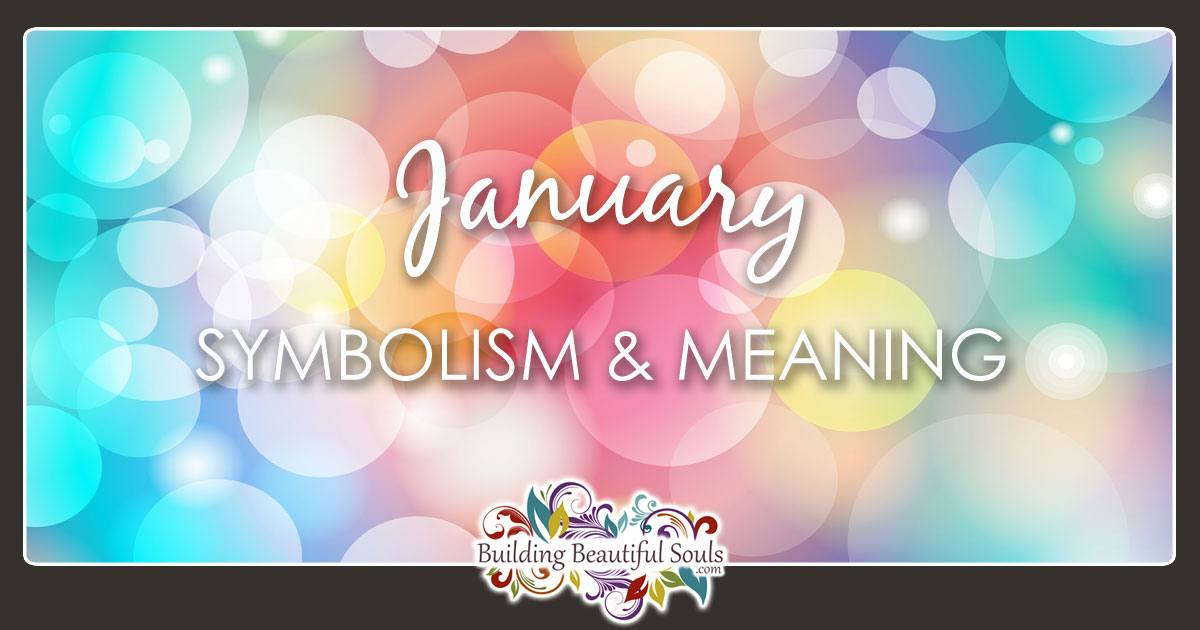 As the first month of a new year, January holds some high expectations for people (hey, no pressure). People around the world begin thinking about their resolutions, new prospects and plans – all of which they hope bear-out better than the year before.

Spiritually speaking, January marks a time for renewal and fresh starts. Humans have a nasty habit of carrying around things from our past, mostly emotions, that really drag us down. You cannot embrace something new without releasing the old, outmoded and unhealthy thought forms.

One idea that helps kick off the New Year right is using affirmations akin to resolutions. Write out a few personal goals that you’d like to achieve that year and speak them out loud as a feta complete. For example, if you have been bothered frequently by illness in the previous year your affirmation might be “I am healthy.” The beauty of affirmations is that they focus your mind and heart on that goal too, which means you’ll pay more attention to it going through the year. In this case, eating better, getting solid sleep and exercise may naturally manifest!

January is the second month of Winter. It is often the coldest month in the Northern Hemisphere and the warmest in the Southern Hemisphere (where it is actually Summer).
January was named after the Roman God, Janus who oversees openings, doorways, and other similar entryways. Janus has two faces – one looking forward and one looking back. This is a very fitting image for January considering our meditative focus on what has come before, and what is yet to be come New Years.

Myths and legends imply that Janus sees all of our past and all our future possibilities. That’s exciting and inspiring. Working with January energies encourages our ability to truly see personal potential and begin activating that daily.

From a metaphysical perspective Janus helps us get “un-stuck”. Have you ever felt like you were looking at a wall or standing at a door and knocking but nothing happens? January is the month when those barriers can start fading away.

Garnet’s name comes from a Latin term meaning seed-like. This association seems particularly pertinent to January with all the efforts for new beginnings. Garnet comes commonly in various shades of red, a color connected with the fire element and that reminds us of the sun’s rebirth in the sky.

The ancients favored Garnet for talismans and amulets. They believed it not only protected the bearer but also aided with healing. Metaphysically Garnet inspires creativity, honesty, faith and sensuality.

Light Workers and healers believe that the physical attributes of Garnet include reducing toxins, balancing energy and improving the body’s ability to use vitamins effectively. Emotionally Garnet soothes, opens the Heart Chakra (while balancing all other Chakra) and offers courage. Overall carrying Garnet brings luck and success in business. 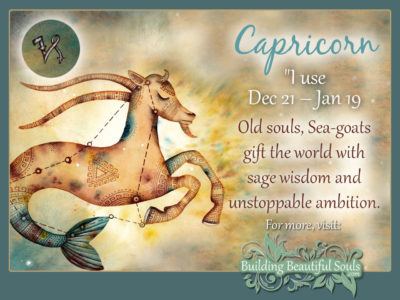 January begins in the sign of Capricorn (the sea-goat) as a hold-over from December. This sign remains until the 20th when Aquarius (the water bearer) begins. Let’s take a brief look at these two birth signs.

Capricorn’s element is Earth and the ruling planet Saturn. Capricorns are the achievers of the Zodiac. These spirited individuals inspire admiration from friends and family alike because of their patience and persistence.

The greatest challenge for Capricorn is balancing work and play/social life. Their focus tends to stick firmly on the current deadline and ambition, which often creates emotional conflict (and a lack of self-care). Thankfully, when inspired, Capricorns can discover truly innovative approaches for their business efforts and relationships.

If you seek a friend with great organization skills, quirky humor and a gift for motivating others, Capricorn is your go-to sign. 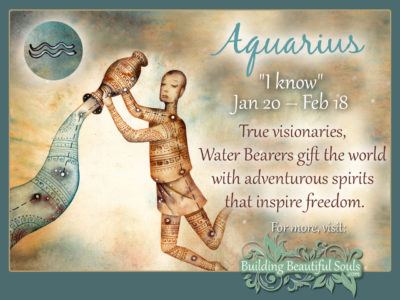 By Comparison, Aquarius is governed by the element of Air and the planet Uranus. Aquarians are the originators of the Zodiac. Their unique attitude toward everyday living mesmerizes others.

Aquarians are trendsetters, willingly or not. These people have a strong sense of responsibility and are generous to a fault. Throughout the time this sign is in the sky, you’ll see a general disregard for trends and the latest styles. Aquarians prefer to pound out their own path with panache.

The challenge for the water bearer comes in the forms of extremes. Their head and heart often vie for supremacy. Add to this an outgoing nature and humanitarian calling, and it can get rough to keep that water in the pitcher!

If you want a non-conformist companion with a brilliant mind and a touch of eccentricity, seek out an Aquarius.

January houses many Holidays. The entire month is dedicated to various awareness causes like healthy weight, codependency and Alzheimer’s. Additionally this is National Mentoring Month, hot tea month and soup month in the US.

The 12 days of Christmas end on January 5th. If you are looking for various other holidays to celebrate how about National Science Fiction day (January 2), World Braille Day (January 4th), Sausage Day in the UK (January 5), Befana Day in Italy (January 6), National Youth Day in India (January 12) or Wikipedia Day (January 16th).

We’re not done yet! National Religious Freedom Day (January 16,), Popcorn day (January 19), National Hug Day (January 22) and the Feast of our Lady of Peace (January 24) all take place in the 2nd half of the month. Mind you, this is a very abbreviated list. 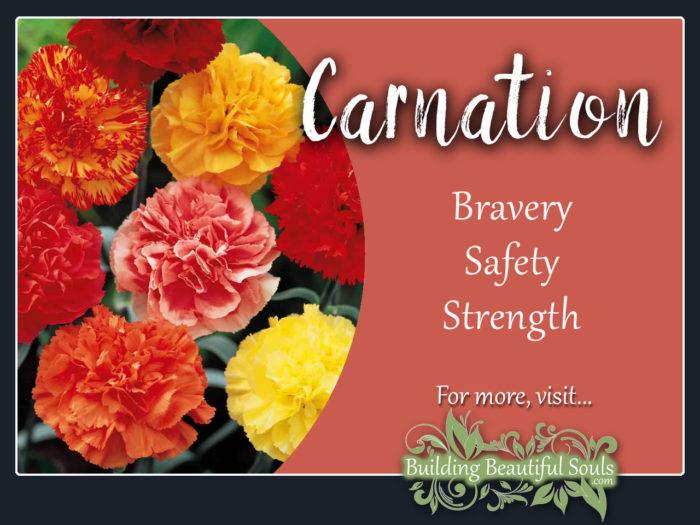 History paints the Carnation as a flower of faith, purity, sensitivity, and commemoration. As a flower with ancient roots going back 2,000 years humans found numerous uses for this lovely bloom. Beverages with Carnation were part of the healer’s kit for sadness. That attribute is certainly timely considering how many people find themselves with a serious case of the blues in winter. Other folk names for Carnation include Gilliflower and Jove’s flower.

There are arguments as to where the Carnation derives its name. Some believe it comes from “corone”, which is a type of garland. Alternatively it may come from Greece where Carnations were part of ceremonial crowns. A third possibility is the term in Latin, which means “flesh”. This designation would apply to the gentle pink color of the Carnation at this time in history.

Metaphysically Carnation aligns with the Fire element and the sun. The most common use for the flower is in protection spells, rituals or talismans. Beyond this, Carnation clears negative energy and offers general safety. 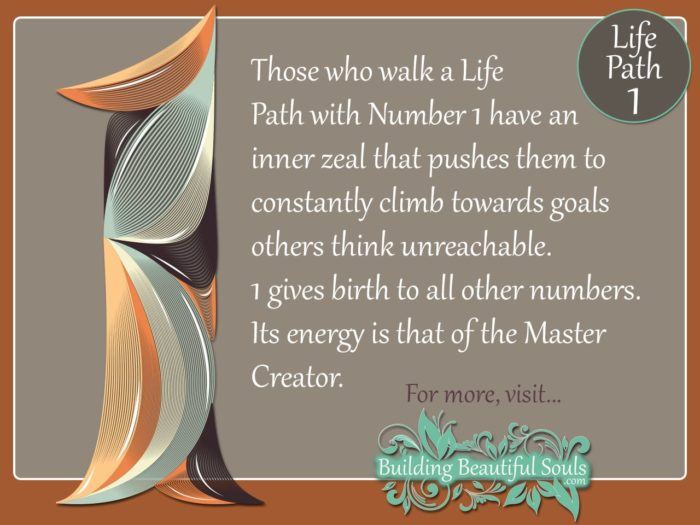 In Numerology, January’s month number of 1 is very important. 1 represents creation – the cornerstone on which other numbers build.

The the sacred Number 1 is active and filled with potential. There is a strong underlying energy for our life purpose in 1. This power moves obstacles out of our way by sheer determination.

This digit begins a cycle of transformation that’s steady and in “good season”. It offers a simple view of life in black and white. 1 is pragmatic, independent and a tad stubborn. Energetically 1 cannot abide injustice or hypocrisy.

All of these vibrations are worth considering when planning your January magical endeavors. 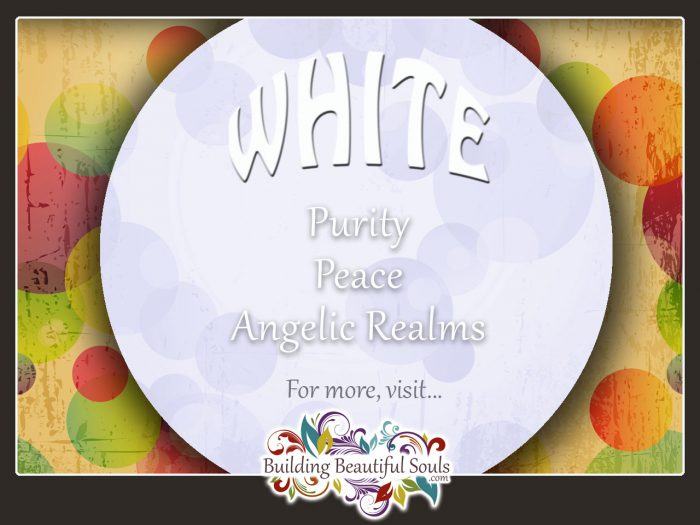 The main color associated with January is a very crisp white. Alternatively, some people add pale sky blue as an option. White is a pure color that represents our inner child, fairness, wholeness, protection and conclusions. This correspondence reminds us that while the cycle of one year has just ended, new beginnings are with us.

White brings peace and calm. It is a clean slate waiting for your proverbial pen. Bring more white into your life when you want to start something fresh and new. Wearing white also encourages giving voice to the youthful nature within (the one who remembers how to play). White accents are good additions to the home when you are re-organizing and creating a healthy environment.

The Celtic calendar includes trees as important symbolism. This system ascribes the period from January 1st until the 20th to the Birch tree. Birch is incredibly strong and able to face disaster in the face. In nature if a forest burns, Birch is the first to come back to life. That strength of purpose reflects January very well.

Witches use Birch in spells for inventiveness, healing, safety and fertility. If you tie a red ribbon on the base of a Birch tree on your property it protects your land from baneful magic and negativity. The ancients often placed Birch twigs around a baby’s cradle to safeguard against supernatural harm. When made into paper, Birch is favored as the foundation for a Book of Shadows.

Those born during this period are highly motivated and pass along that positive energy to everyone around them. You always see the possibilities in people and situations, and reach for those goal. In a tough situation you come thru relatively unscathed. Birch people make excellent leaders because they think on their feet and ooze charm.

If you begin seeing a lot of Birch trees in your daily life, it’s a message of renewal. It is time to move on and become the pioneer for our soul’s journey. You have the inner strength for this, and so doing eventually gives you the stability you crave.

The Full Moon in January is known by three common names: Wolf Moon, Hunger Moon and Cold Moon. If you happen to have a Wolf Totem or Spirit Animal, this is a perfect opportunity to honor that energy in your life and renew your connection to that spirit.

Combining Full Moon Symbolism with the energies of January, this is a good time for puttering around the sacred space of home. Fill the pantry with stock food (for the “hunger” moon). Make it warm and welcoming. Sit down and just enjoy the magic of relaxation.

January’s Full Moon ritual can be one for setting your intentions for them months to come. Don’t go over the top here. Keep your goals reasonable so you don’t get discouraged.

The January Effect is a seasonal shift in stock values, typically pricing higher than before, mostly in small caps. This rally follows a month of offsetting capital gains by selling off stocks. Alternatively investors may use bonuses etc. to bolster their buying ability.

“No one’s ever achieved financial fitness with a January resolution that’s abandoned by February.” ~ Suze Orman

“January is always a good month for behavioral economics: Few things illustrate self-control as vividly as New Year’s resolutions. February is even better, though, because it lets us study why so many of those resolutions are broken.” ~ Sendhil Mullainathan

“January is here, with eyes that keenly glow, A frost-mailed warrior, striding a shadowy steed of snow.” ~ Edgar Fawcett

“The shortest day has passed, and whatever nastiness of weather we may look forward to in January and February, at least we notice that the days are getting longer.  Minute by minute they lengthen out.  It takes some weeks before we become aware of the change.  It is imperceptible even as the growth of a child, as you watch it day by day, until the moment comes when with a start of delighted surprise we realize that we can stay out of doors in a twilight lasting for another quarter of a precious hour.” ~ Vita Sackville-West

“January is the quietest month in the garden.  …  But just because it looks quiet doesn’t mean that nothing is happening.  The soil, open to the sky, absorbs the pure rainfall while microorganisms convert tilled-under fodder into usable nutrients for the next crop of plants.  The feasting earthworms tunnel along, aerating the soil and preparing it to welcome the seeds and bare roots to come.” ~ Rosalie Muller Wright

“There are two seasonal diversions that can ease the bite of any winter.  One is the January thaw.  The other is the seed catalogues.” ~ Hal Borland

“Little January tapped at my door today.
And said, “Put on your winter wraps,
And come outdoors to play.”
Little January
Is always full of fun;
Until the set of sun.
Little January
Will stay a month with me
And we will have such jolly times –
Just come along and see.” ~ Winifred C. Marshall

“To read a poem in January is as lovely as to go for a walk in June.” ~ Jean-Paul Sartre