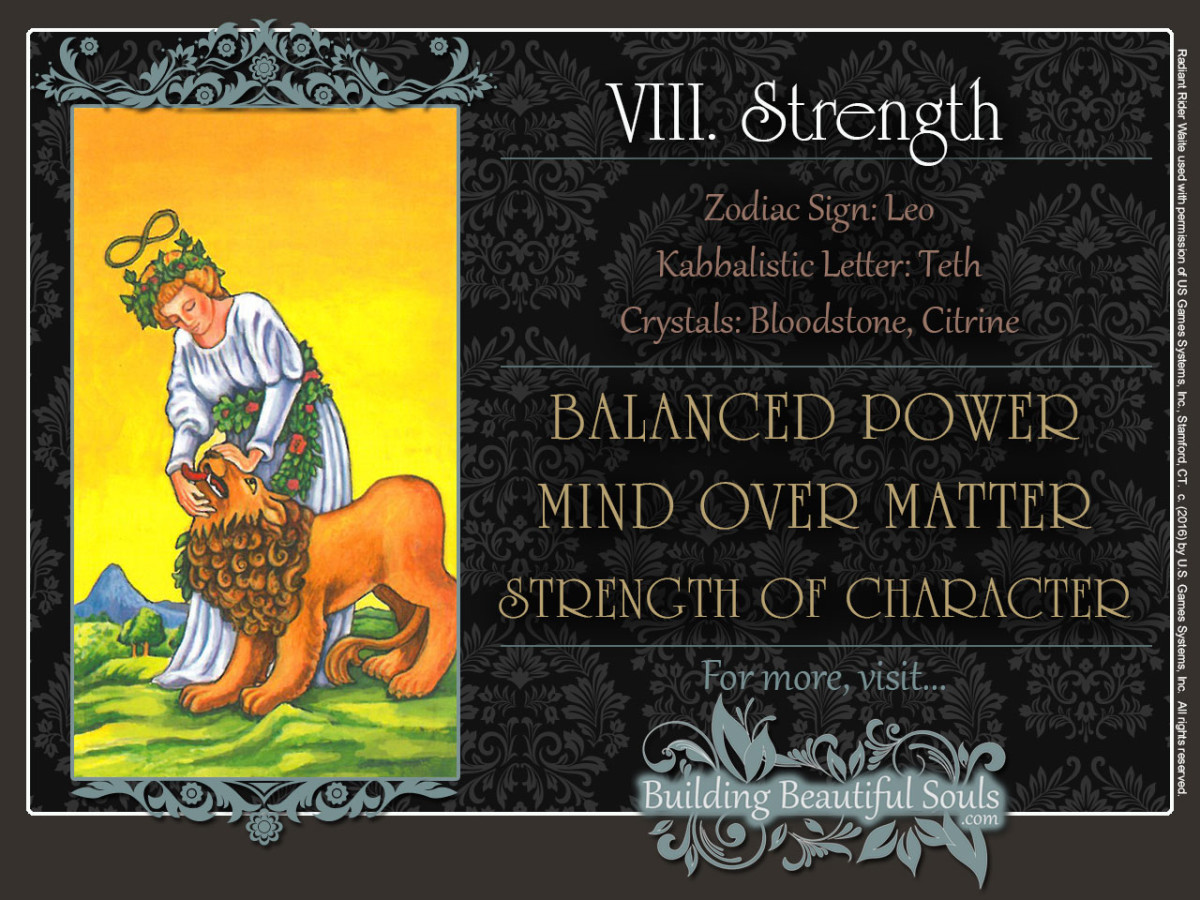 All of a sudden, everything makes perfect sense!

You are now ready to accept that all your experiences up to now have served a higher, divine purpose. Even better, you now recognize and can wield at will your own internal strength of character.

The connected chain of red Roses around the maiden’s waist on the Strength tarot card suggests a harmony of desires, that your higher self is now in perfect harmony with the divine self. This awareness enables you to shape your destiny.

The cosmos hasn’t pummeled you into submission, it has groomed you for your higher calling.

Robed in white, the color of pure spirit, the maiden of the Strength tarot represents power and balance. Balancing intellect (yellow), passion (red), matter (green), and emotion (blue), her influence gives everything shape and definition.

On the Strength tarot card, the flowers making up her crown and the garland by which she leads the lion show that this is a natural, life giving force.

In alchemy, the red Lion symbolizes the force of nature under perfect control. That’s why his tail is tucked in. Keeping in mind that the maiden does not restrict but shape, we see that the lion is actually being positioned.

In heraldry, the lion’s stance on the Strength tarot is called statant (standing), symbolizing majesty.

Like the lion, you are embracing your destiny, becoming its master in the process.

More than anything, the Strength tarot card depicts a shaping, rather than a restraining influence. The lion’s tucked in tail is a gesture of submission, showing that he is already tame. Instead of forcing the lion’s mouth open or closed, the maiden is actually adjusting his pose, like an artist. A great work of art requires more than raw talent, but also vision, patience, control, and precision.

The legendary sculptor Michelangelo (1475-1564) once said that instead of forcing his blocks of marble into what are now timeless masterpieces, he first attempted to see what figures were hidden inside the rock. Then, all that was left to do was to chip away the excess marble.

This is exactly what the universe has done with your true self. Rather than cutting you down to size, it has groomed you for kingship. The Strength tarot is associated with Leo, the king of animals. A king must rule wisely. Otherwise he is a tyrant.

You have accepted that your animal nature – your instincts, desires, and fears – are part of who you are. This acceptance has scored you a significant inner victory, resulting in a heightened sense of confidence that is clearly visible to those around you. In other words, you have developed a healthy, productive relationship with your natural impulses.

For example, you may have learned that fear is an instinct necessary for self-preservation, but that allowing it to rule your life only traps you in a prison of your own making. This card may indicate that you have stopped engaging in reckless, self-destructive behaviors, such as overspending, overeating, binge drinking. Or you may have made great strides in overcoming a phobia, such as agoraphobia, the fear of leaving the house.

When it comes to pleasure, you may have adopted a more responsible stance toward sexuality. You may have given up the frantic chase for the next one-night stand, choosing instead to build a committed, but passionate long-term relationship. Believe it or not, fidelity can be very sexy.

You newfound sense of purpose and power will also help you find creative and effective ways to solve longstanding as well as new problems.

When reversed, the Strength tarot card points to a sense of insecurity resulting from an imbalance between your desires and principles. Your animal impulses either have overpowered your higher self, or they are being suppressed by a false notion of morality or spirituality. Both scenarios are equally dangerous, as either can completely undo your spiritual or material progress, sending you back to square one.

The Strength tarot reversed also cautions you that there is a critical need to restore the balance within yourself.

It is one thing to accept that your instincts make you who you are and that pleasure in itself is a good thing. Remember, you’re a divine being having a human experience. But to conclude from this that “anything goes” because it feels good to you and that you have all the answers is a leap that makes no sense, logically or in any other conceivable way. That path is leads anywhere, but within, and it is destructive not only for others but for yourself, as well.

There is nothing wrong with trying to look your best, for example. But being an insufferable narcissist, who is obsessed with his looks will only push others away. Likewise, financial stability is a good thing, but how much time to you spend worrying about money, denying yourself even the smallest pleasure? Do you avoid others because they have different political views or worse, try to force your views on them?

Pride goes before the fall. It is equally important to realize that shame is the flipside of pride. It is one thing to take responsibility for your mistakes. But beating yourself up over them will get you nowhere.

Your mistakes do not have to define your worthiness.

Not if you learn from them and take the steps necessary to avoid them in the future.

The Strength tarot is the eighth Major Arcanum. As a hieroglyph, it symbolizes spirit and matter in perfect harmony. Because a cube has 8 points, this number also symbolizes manifestation. Astrologically, 8 is associated with Saturn, the creator/destroyer.

Read all about the in-depth Numerology meanings of the Number 8.