Special Note: Featured image is from our sister-site WhatIsMySpiritAnimal.com

The first time it happened to me I was shocked so I guess I shouldn’t have chuckled when a psychic development student called to ask about ‘seeing people turn into animals’.

I asked, “Were you seeing their Spirit, Totem, or Power Animal?” “Uhhhh…”, she stammered. LOL

Now, I’m a super-grounded, show-me-the-evidence kind of psychic mediumship development teacher. In fact, I’m pretty skeptical. As a professional psychic medium and Shamanic journeyer my intention is always to help students stay in their integrity and not go off on flights of fancy during an intuitive reading. More importantly, how to discern between their imagination and true psychic medium messages.

If during a practice psychic reading a student says to a ‘client’, “You’ve got a big heart and love to help people” – they get the gong, the buzzer, the stink-eye. They’re asked to dig deeper, listen more closely to spirit so they receive specific psychic messages like, “You’ve got metal in your leg” or “You aren’t sure which job to take” or “You want to hear from your husband and he’s telling me you’re doing a great job running the business you started together.”

So when this student explained she was standing in line at the grocery store and the guy in front of her turned into a Crow (specifically, his head turned into a Crow’s head), my job was to make sure she really saw what she tawt she taw. Turns out, she did! She did! It was also my job to help her try to determine why those ‘visions’ came to her. 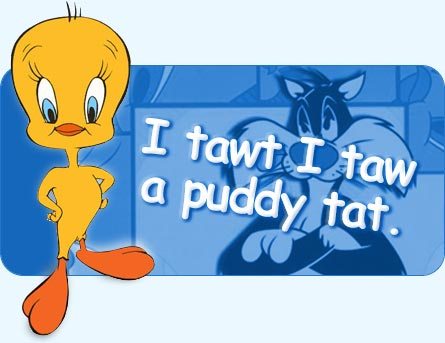 ***Disclaimer***
I don’t advise walking around in public with your Spidey Senses wide open. It can be very draining and, more importantly, potentially cause big ethics breaches. 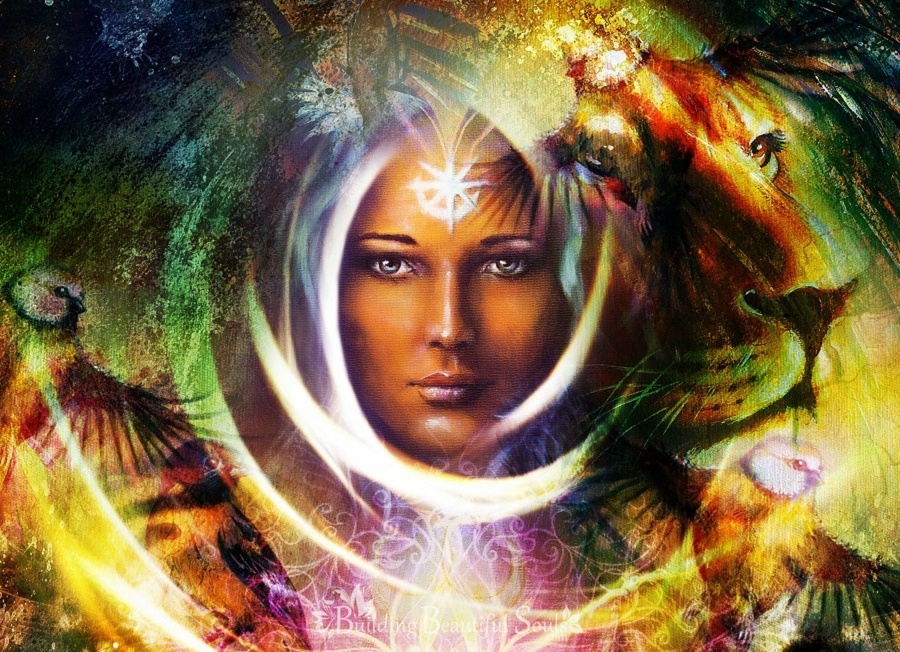 LOL Maybe it’s because I’m writing this at 5:00AM but that title tickles me. And yet, for those earnestly working on developing their psychic powers it’s a deeply meaningful question that must be answered.

Though some beginning psychic mediums have ‘visions’ from the start, it can make those who don’t think they’re having a psychotic break. It can be scary and incredible all at the same time. And why, of all visions a psychic medium could have, would it be of people transmuting or shapeshifting into animals?!

As I always answer when students ask questions, “I don’t know for sure but some of the possible answers for why a psychic medium might see a client morph into an an animal are”; 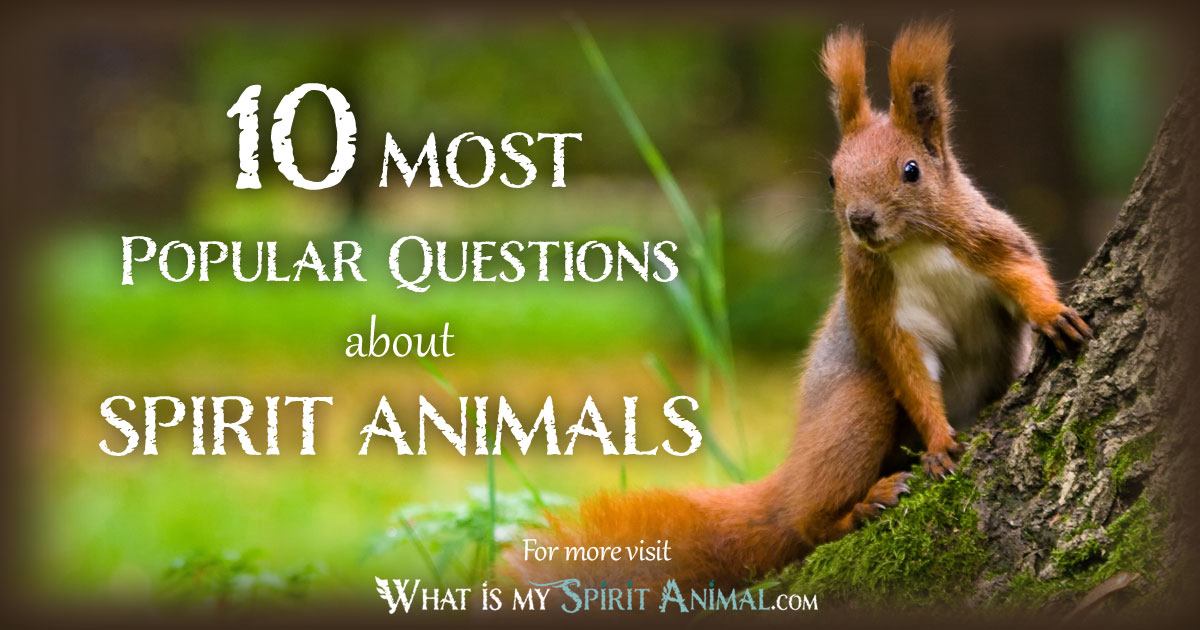 Image from our sister-site WhatIsMySpiritAnimal.com. Click to read “The 10 Most Popular Questions About Spirit Animals” .

When we open up to our most authentic psychic medium abilities we become more aware of our connection to all that is. Logically, this must include a more profound conscious connection to the animal kingdom – i.e. Spirit, Totem, and Power Animals. Just as you receive messages from the world of spirit (mediumship) or you might communicate with animals (animal communicator or pet psychic) this is another way the Universe sends the signs and omens psychic mediums channel through to clients.

Though ‘Spirit Animal’, ‘Totem Animal’, & ‘Power Animal’ are interchangeable terms we, for learning’s sake, break them down into categories.

On our sister-site, WhatIsMySpiritAnimal.com, you can learn all about;

If you see someone randomly shapeshift into an Elephant or Dog, it might be because they’re worried about their family. Maybe they’ve been praying for help from the other side and you can see the animal ally or allies who are surrounding them.

Perhaps you see an animal shapeshift occur during a psychic medium reading. The animal could be a pet who crossed over. It could be a family member or friend sending you a message about the client’s nickname. Once, a client of mine asked if her husband would send her the ONE message she hoped to get. I said, “He’s showing me a very, very tall bird.” She began to cry. She’s almost 6ft tall and his nickname for her was ‘Bird’.

Bottom line, Spirit Animals can show up for any and all reasons. Just be open to the symbolism and interpretations. 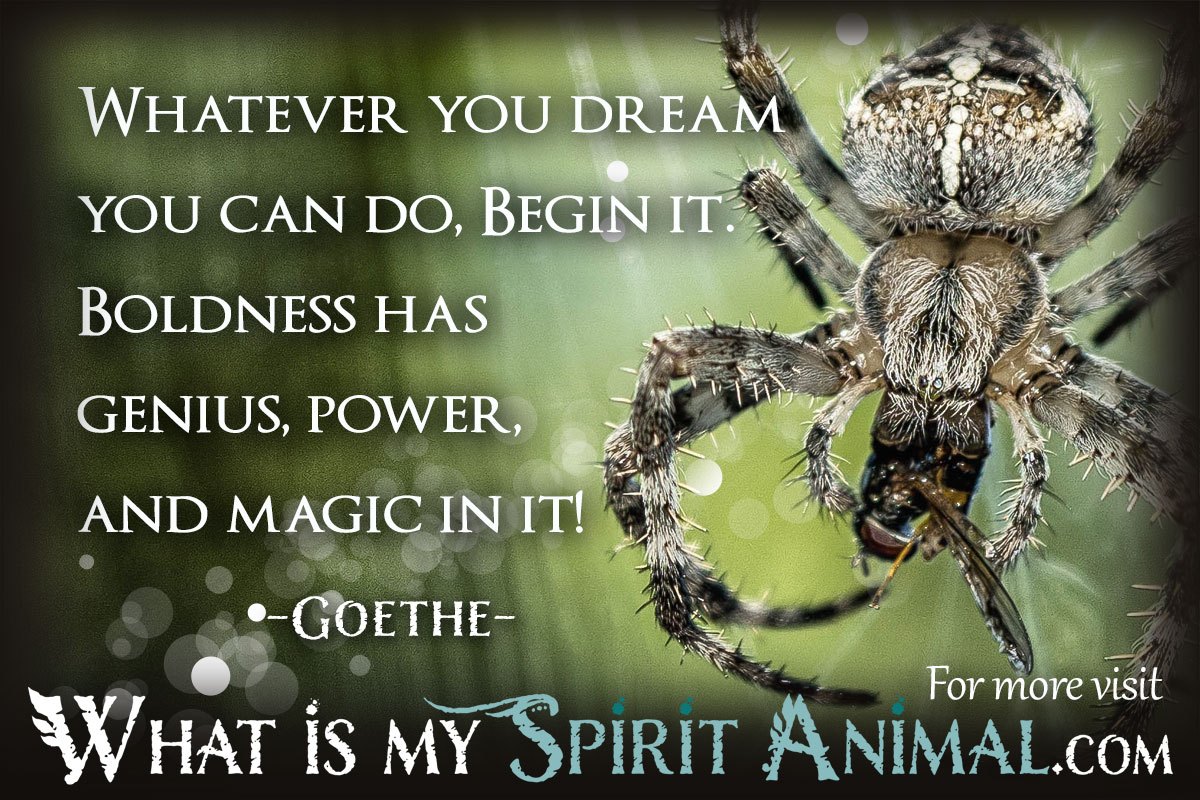 As outlined above, a Totem Animal is who a person ‘is’. Again, this assignment of purpose is given only as a way of differentiating between Spirit, Totem, and Power Animals.

If you see someone transmute into their Totem Animal, perhaps it’s a sign or omen that it’s time for them to step into the seat of their power. Maybe they’ve always wanted to be a medical professional but are afraid they’re not smart enough. If you keep seeing Frogs or Snakes around them it might be the animal allies’ way of saying, “Go for it! We’ve got your back!”

Another example might be seeing someone transmute into a Bee. Possibly their calling is to work with environmental issues – maybe political, research, activism, etc.

To be clear, Totem Animals can show ALL sides of an animal’s nature. If you look at someone and see a vicious Wolf, scary Shark, or terrified Rabbit – tread lightly into those psychic waters. Wolves can be brutal hunters but they also have the playful temperament of a Golden Retriever. Is it time for them to get some help for their anger issues? Sharks are terrifying. Does this person have a harmful nature? On the flip side, there’s so much we don’t know about Sharks, maybe the person you see needs to work on removing the mask and showing the world who they truly are. Rabbits are fierce fighters but let’s face it, they’re Rabbits. These delicate creatures are hard-pressed to adequately defend themselves so when a Rabbit is terrified it’s usually time for consummate compassion and gentle conversation. 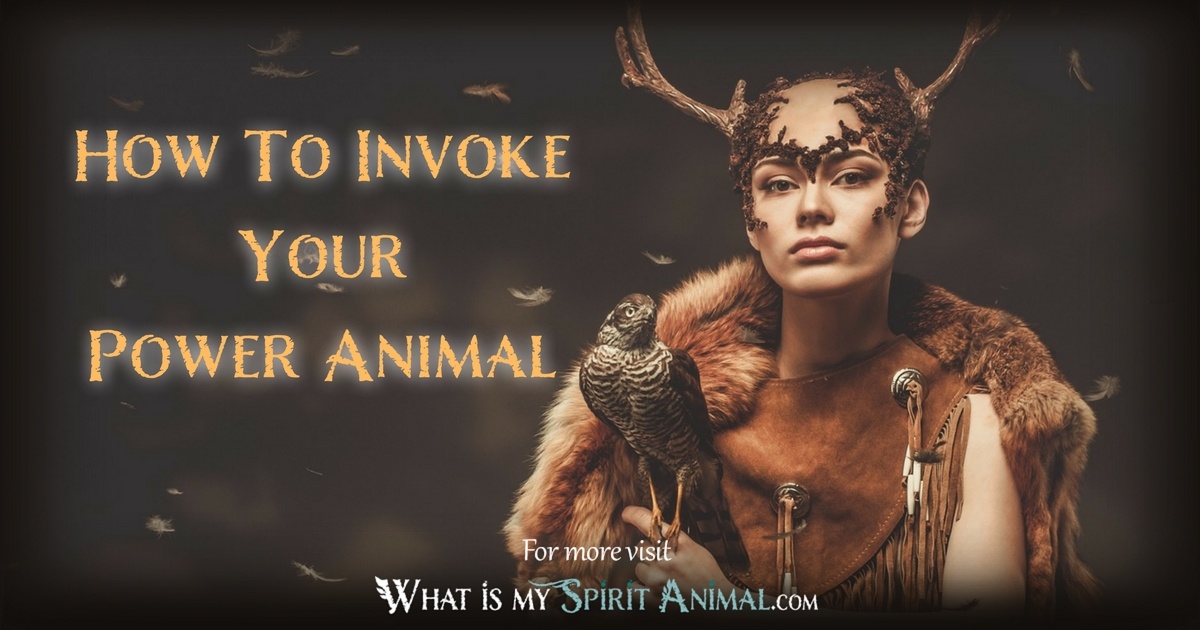 Image from our sister-site WhatIsMySpiritAnimal.com. Click to read “How To Unleash Your Power Animal. But be careful…”

Let’s say that you ‘see’ a Tiger coming out of someone’s Solar Plexus area. Maybe that person wants to start a business or get a better job but doesn’t have the strength to ‘go on the hunt’ for opportunities. Tiger energy and medicine may be what they need to invoke from within. By unleashing ‘the Tiger inside’ the job hunt or search for the right business to start may get started and go great! Also, because the ‘Tiger’ was emerging from the Solar Plexus Chakra it could be a sign that their creativity, their solar power, is riding an all time high or will be in the future. So, it’s important to pay attention to what part of the body morphs into an animal spirit guide (or what part of the body you see the animal spirit guide emerge from or go into). 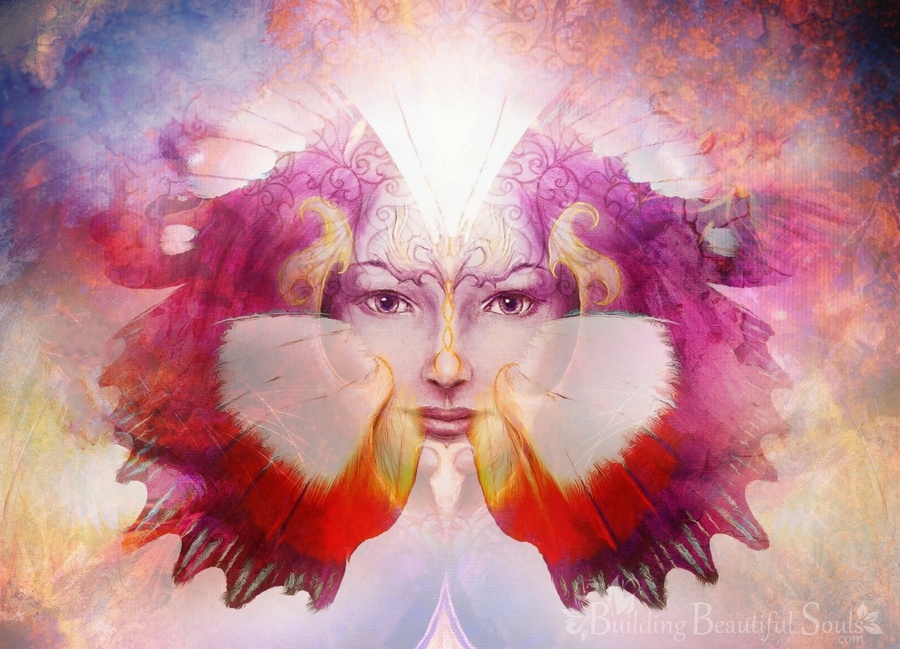 Just like the example of seeing a Tiger materialize from someone’s Solar Plexus Chakra, you might see a Snake slither out of someone’s Root Chakra. A few potential reasons for this could include:

As an evidential psychic medium, I often see Butterflies fly out of folks’ Heart Chakra. This is always an indication they are hoping to hear from a loved one on the other side.

It can really help understand the symbolic meanings of your psychic visions if you’re well-versed on Chakra Symbols & Meanings. When you know the symbolism and function of each Chakra you can, then, better pinpoint why a particular animal spirit guide is present in that area of their body.

5. It Might Be Time For You To Incorporate Spirit, Totem, & Power Animals Into Your Psychic Medium Readings 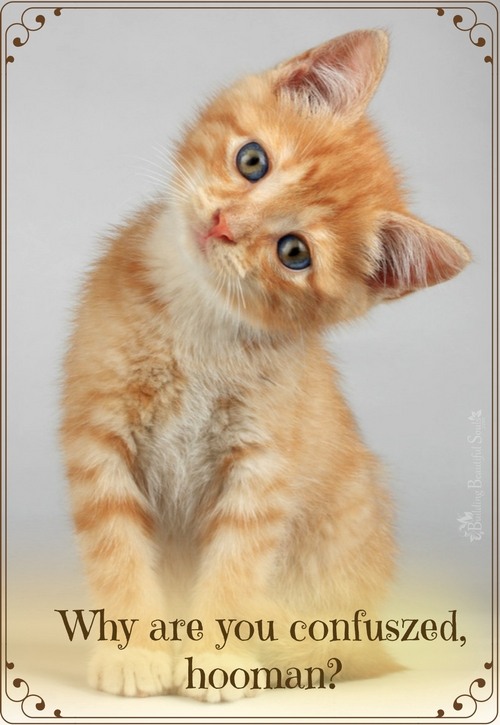 It never ceases to amaze me that it never ceases to amaze students when animal spirit guides show up, sometimes completely visible to their Third Eye. Over the years, student feedback has been that they had always believed animal allies are only for those following a Shamanic healing/Shamanic practitioner path or animal communication or pet psychic path. For some reason they’ve categorized these types of psychic abilities and powers very differently.

No matter what label you adopt, the bottom line is all these types of paths and resulting readings or healings which stem from them are psychic events. And, the spirit world can come knocking on your Third Eye if and when it’s time for you to add more/different types of psychic abilities to your tool kit. Or, it could be that your higher self knows you’ll need to utilize and understand these types of channeled messages in the future. For example, in a Remote Viewing class I took with Joseph McMoneagle at The Monroe Institute, a black and yellow Bumble Bee with gossamer wings kept appearing to my psychic eyes. Turns out, my Remote Viewing target was the front of an old time movie theater. Take a look at the target photo which was revealed at the end of the exercise. Can you see the black and yellow Bumble Bee and its gossamer wings? 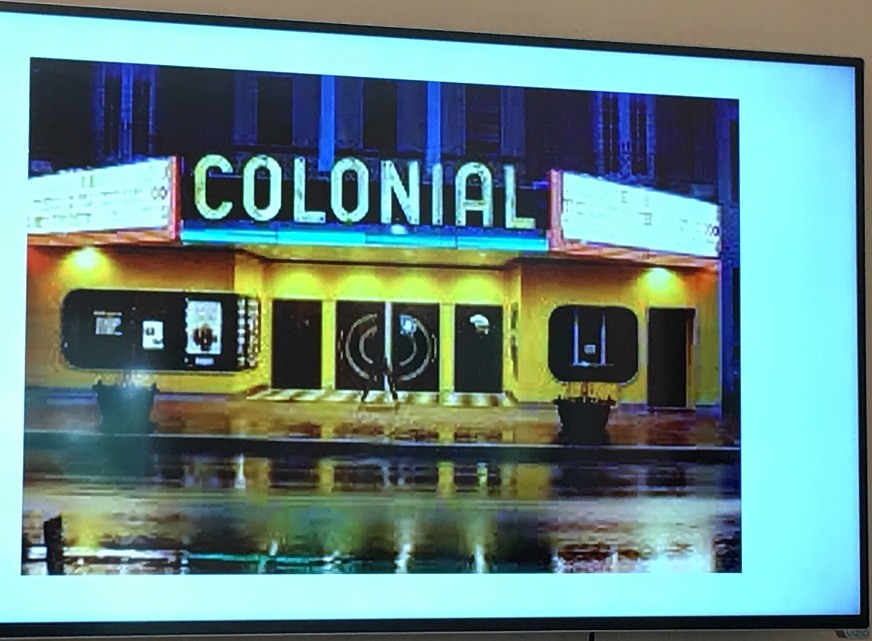 The rest of the class looked at me like I was ‘one of those’ (GASP) NEW AGER’S when I started talking about how the Spirit Animals were helping me to ‘see’ my Remote Viewing targets. Yeah. Their ridicule didn’t last very long when my beloved animal allies consistently helped me identify targets. Then everybody wanted to know about Spirit, Totem, and Power Animals. In this, I’m convinced part of the reason the animal spirit guides kept pressing me to talk about them was so I could be a conduit to help 15 other seekers open their mind to even greater possibilities of their own psychic abilities!

I believe we work in tandem with and are forever connected to all that is. So, even when your conscious mind is all like, “OMG! WHAT just happened?” or “Huh?” – relax. Have some trust. If your sacred contract includes putting attention on psychic abilities and powers then expect your higher self and the Universe to have your back and help you safely journey through all psychic and spiritual awakenings.

The world needs more evidential psychic mediums, Shamans, and Lightworkers. When the animal spirit guides show up to help, honor them. By doing so you honor your own journey and will likely find your psychic abilities and powers becoming more pronounced and the messages received to be far more accurate.


2 thoughts on “Psychic Abilities & Spirit Animals: What You Need to Know”