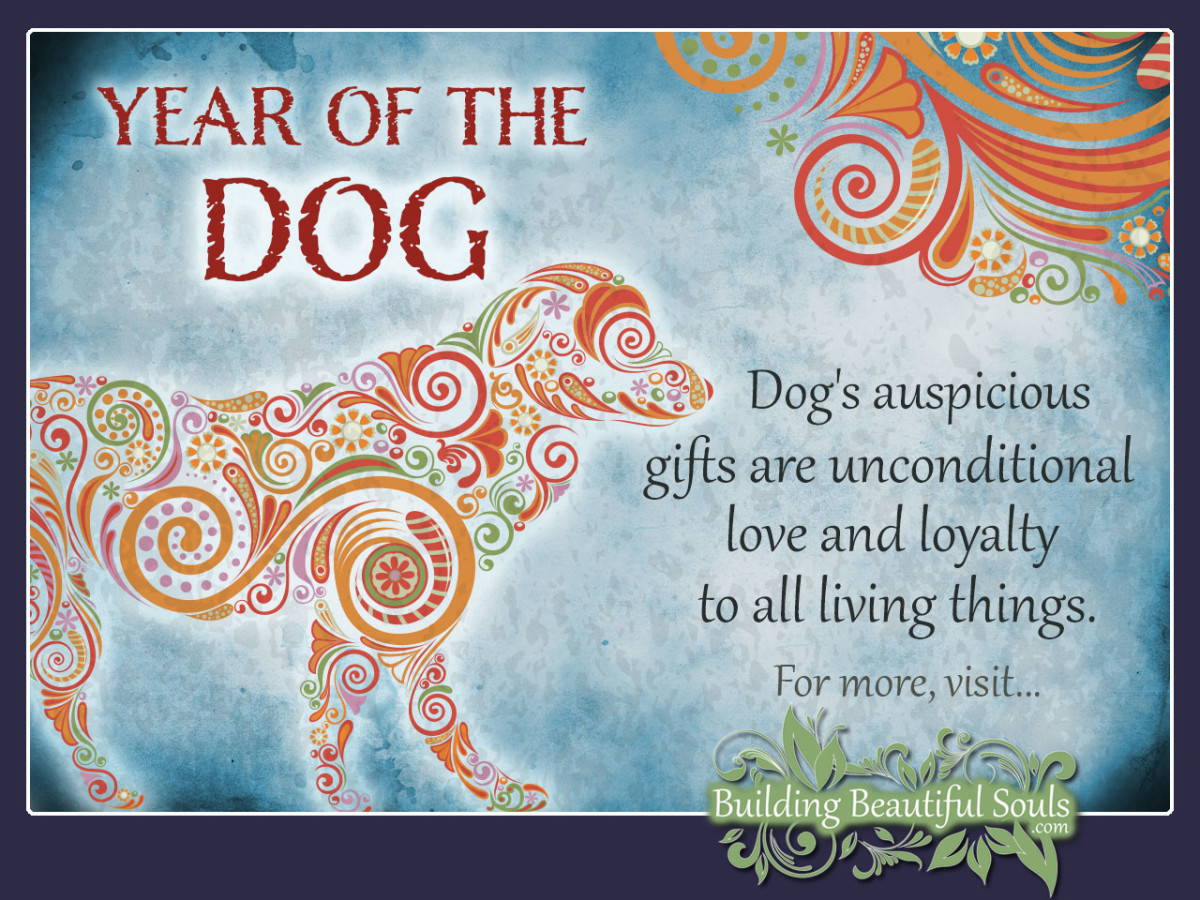 In the Chinese symbols it is The Dog which represents courage, loyalty and unusually high moral character so it is no surprise the Chinese Zodiac Dog is always on the lookout for ways to be of service to friends and family. They will often put everyone else’s needs ahead of their own.

Those born in the Year of the Dog are the ultimate protectors of their realm and family is of the utmost importance to them.

Of the Chinese animals only The Dog has an uncanny ability to sense danger. They will, almost instantly, decide whether a person is “friend” or “foe” and a situation or place is “good” or “bad” because, to this Chinese zodiac sign, there is no gray area. Ironically, their observations are usually spot on.

With the Chinese Dog, what you see is what you get. They are transparent personalities who do not put on airs. They are warm, intelligent and generous. There is little more a Chinese Dog hates than cowardice, disloyalty and injustice. They believe everyone should be as responsible and honest as they are.

Because of their inherent sense of duty, the Chinese Zodiac Dog often finds themselves in leadership roles even when they haven’t consciously pursued such a position.

The Chinese Dog is fairly pessimistic and can also be prone to a bit of paranoia. Perhaps because they are always standing guard over their friends and family, they tend to expect trouble and, so, are constantly worried.

In relationships of any kind, it can seem like the Chinese Dog is coming on too strong or is a nibby-nose because of the constant attention they give friends and family.

Of the Chinese Zodiac animals, it is The Dog which can be the most argumentative and, though they will rarely pick a fight, they will rarely back away from a fight when backed into corner. Also, if hurt, they will fiercely attack and no quarter will be given the unfortunate soul who wronged them.

Scroll down to find your birth year. This will tell you which “type” of Chinese Dog you are and help you to learn more about how the combined energies of the fixed and secondary element impact your life.

Tibetans refer to this type of Chinese Zodiac Dog as the “Iron Dog”. Because Metal is their fixed element, this Chinese zodiac animal is a double metal sign. This can be extremely positive or negative. The Chinese Dog is already steadfast in all their convictions. By adding Metal to the chart, steadfast can turn to fanatical in the blink of an eye.

Those born in The Year of the Metal Dog adhere to only the highest moral and ethical standards. Impeccable integrity is of the utmost importance to this Chinese zodiac Dog. And, so, once they’ve chosen to place their allegiance with a mate, political party, country, job, etc. there is no turning back. They will stand by their chosen till the death.

The Water Dog is the more liberal and laid back of the elemental types. Water in their chart makes the already highly intuitive Chinese Zodiac Dog, downright psychic.

The Water Dog is among the most popular of all the Chinese Zodiac animals because of their ability and willingness to listen to and counsel others. Additionally, they are more flexible in their moral and ethical standards.

Those born in The Year of the Water Dog must watch their finances as they are prone to taking last minute, expensive vacations, going on shopping sprees and impromptu spa visits, etc. They love to indulge themselves and will do so without regard for the consequences.

The element of Wood in this Chinese Dog’s chart makes them far more focused on growing and flourishing as a person than the other elemental types. Any educational vehicle they can utilize (class, lecture, book, DVD, person, etc.) to help them become more accomplished is high on their list of priorities.

Money and success is important to the Wood Dog though they will never let the desire for these things dominate their focus.

Those born in The Year of the Wood Dog are warm, full of fun and tender hearted. They seek long lasting relationships that will allow them to feel supported and safe.

The Fire Dog is a force of nature. Their sheer willpower, never ending commitment to a cause, idealism, courage and charisma can allow them to perform true miracles.

Constantly on the hunt for their next, best quest, the Fire Dog is one of the sexiest of the Chinese zodiac signs. They are almost irresistible to the opposite sex, even if it’s not a traditionally compatible sign.

Those born in The Year of the Fire Dog are ferocious when attacked. They especially do not like being backed into a corner nor do something that goes against their will. These Chinese zodiac animals do not make idle threats. They say what they mean and they mean what they say.

The Earth Dog is a leader extraordinaire. Just, loyal, diplomatic, practical and courageous they may be counted on to be balanced decision makers both in times of defeat as well as victory.

Those born in The Year of the Earth Dog are anomalies in that they are overachievers but will seldom burn out because they move slowly toward what they want. Their movement is always deliberate and well planned so they do not waste energy getting to their chosen goal line.

The Chinese Dog’s sense of humor and strong sex appeal makes them much sought after partners. They can be shy as they are extremely emotionally sensitive. Once they open up, this Chinese zodiac animal is a terrific shoulder to lean on and can always be counted on to offer supportive, loving words of encouragement.

On the flip side, when bitten, the Chinese dog will bite back (usually harder than they were bitten) however as a general rule, this Chinese zodiac sign is very easy to live with.

A Chinese Dog who is involved in a terrific relationship will yearn for a family and will do everything within their power to create a stable and lasting one.

For best zodiac compatibility, The Dog’s best options are The Chinese Tiger and The Chinese Horse.

Independent, humorous and playful, Chinese Dog children are like little adults. They have an uncanny ability to perceive situations and people with amazing clarity and, being realists, accept them for what they are.

Dog children are confident, loyal and, even from the earliest age, will communicate in a manner so sincere and direct that it can make others uncomfortable because while the Dog child has no hidden agenda, others often do.


One thought on “Year of the Dog – Chinese Zodiac Dog Meanings, Personality & Compatibility”