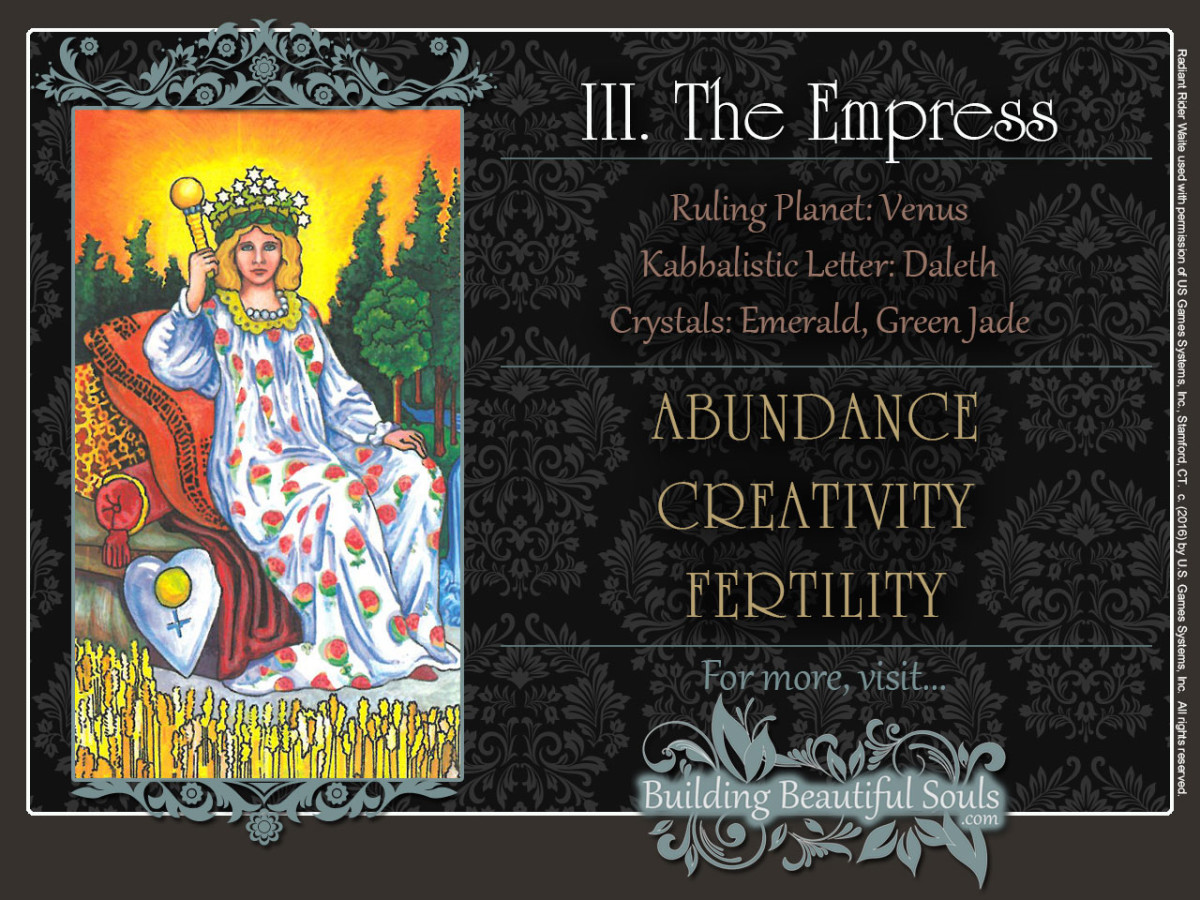 Many descriptions of The Empress tarot card ascribe her meanings to those of symbolizing Gaia, the Earth Mother, the Feminine Divine or Principle as well as the goddesses Isis, Demeter and Freyja.

The Empress tarot is all these things and much, much more.

Whereas The High Priestess tarot card symbolizes the pure or virgin state of the collective or cosmic subconsciousness, The Empress tarot represents the unlimited potential for productivity and creativity that occurs once the subconscious has been ‘impregnated’ by the self consciousness.

So, what does this mean exactly?

Rachel Pollack (Tarot Wisdom, 2008, pg.58) describes The Empress tarot thusly, “She is the giver and ruler of the laws of life”.

Oh, yes. When this lovely lady shows up in a tarot reading things are about to get really real!

The Empress tarot card is a reminder to the conscious mind that as a spiritual being you haven’t been cut off from the divine source, you have been placed into one of its most magnificent creations – woman. That’s why the landscape surrounding The Empress is so rich. The Empress card shows her gifts of divine beauty and abundance everywhere: in nature (the woods) and in civilization (the grain field). The waterfall is the outpouring of passion and creative energy.

The energy of joy expressed by the Empress tarot is physical and emotional, but also spiritual. This is why the sky in the Empress card is yellow.

The Empress’s scepter is a sign of authority and power. Tipped by a solar orb, it identifies this power as divine. Her crown of 12 stars, representing the houses of the zodiac, shows that the Empress is the queen of the heavens.

The red roses on the Empress’s robe signify not only physical love, but passion in general, while the color of the robe, white, is a sign of pure spirituality. This message is reinforced by the symbol of Venus on the Empress’s heart shaped shield. The stone bench shows that the card’s message of passion and joy is a fundamental cosmic principle.

Noted occultist Arthur E. Waite has called The Empress tarot the Refugium Peccatorum, the Refuge of Sinners. Refugium Peccatorum is a Roman Catholic term for the Virgin Mary. In this, The Empress (though not a virgin) represents the most maternal and healing aspects of woman or motherhood. For who else but Mother loves unconditionally? Who else but Mother cultivates the very best in her flock, both personal and the world’s (it takes a village)?

The Empress tarot card is also thought to portend pregnancy. While potentially true, pregnancy can be in physical, mental and emotional form. A ‘baby’ can symbolize a literal baby boy/girl but it can also represent a new business, school project, invention, etc.

So, be sure to look to the suits surrounding The Empress tarot for more clues as to what type of ‘pregnancy’ is being alluded to in the reading.

Because the Empress tarot is associated with Venus, the goddess of love and pleasure, this card often suggests romantic and physical love as well as the joy we receive from it. After all, this is the process by which the human species perpetuates itself.

This tarot card also expresses the energy of the moment your heart skips a beat when that special someone else says yes. The Empress tarot is a prosperity card, meaning that it announces not only financial wealth, but also the opportunity to enjoy it. After all, what good is having a million dollar job, if you are working yourself to death for it? However, The Empress’ most important message is one of a new-found capacity for enjoying life.

Like Eugene Henderson in Saul Bellow’s Pulitzer Prize nominated novel Henderson, The Rain King, you can have all the blessings life can heap onto to you and still be dissatisfied. Wealthy and surrounded by a loving family and admiring friends, Henderson is still miserable. When a constantly nagging inner voice begins to whisper, “I want. I want,” he embarks on a dramatic odyssey into the heart of Africa. He finally has the courage – or sense – to ask it what it wants. The voice answers, “To live.” This realization, that the meaning of life is living, is the most important lesson to be learned from this card.

This is a mystery so profound that it doesn’t seem like a mystery at all – too often, people take life for granted. Remember that life is a gift, and the point of giving is to bring happiness. Think about the joy you feel when you surprise someone with a present and that person is ecstatic, telling you this is exactly what he or she has been wanting all along. Gift giving is about joy, nothing else. If other motivations come into play, a gift actually becomes a form of currency, for example if you purchase an expensive piece of jewelry for a loved one as a desperate ploy to save your relationship.

Do you define happiness too narrowly? Are you focusing your attention on only a few areas? Remember that many things in life can be pleasurable. While standing in the limelight and receiving thunderous applause from admirers can certainly be an emotional high, it’s extremely exhausting as a lifestyle. A Sunday barbecue in the backyard, Thursday night bowling league, or curling up with a good book away from the hustle and bustle of the world can be equally gratifying.

Perhaps you have misdirected your expectations, or your definition of success is wrong. For example, many people define beauty – even inner beauty – by what they see in the media. While being a recluse in the desert isn’t everyone’s cup of tea, it’s important to keep in mind that the wonderfully escapist world we see on TV is not an effective model for real life.

However, renouncing pleasure altogether is equally counterproductive. Very few people are cut out for an ascetic lifestyle. Even Buddhist monks are entitled to eight possessions. Besides they, too, are driven by desire: the desire for spiritual truth.

The Empress tarot is the third Major Arcanum. The Number 3 symbolizes new life created from the interaction of opposites.

In fact, The Empress unites the male and female aspects of deity, giving birth to the universe as a result. This means that the creation of the world is an act of love. Astrologically, this number is associated with Jupiter, here in his aspect of divine mercy.