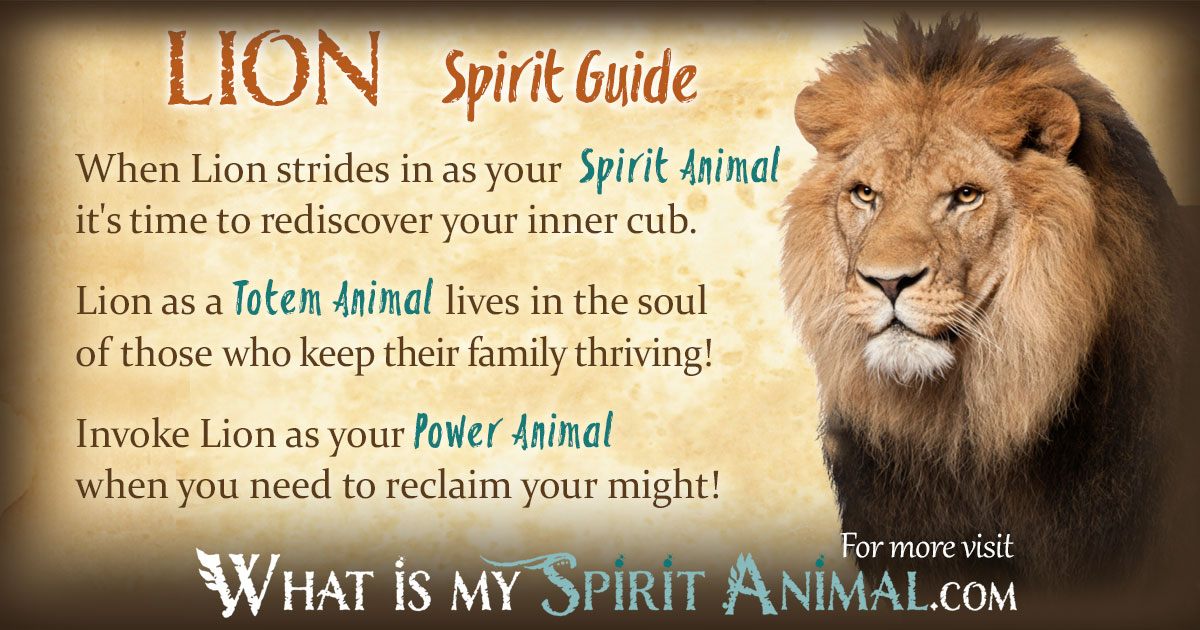 Image from my sister-site WhatIsMySpiritAnimal.com

Through all cultures the overall symbols and meanings of Lion includes:

As you read through the in-depth collection of Lion symbolism and meanings here on Building Beautiful Souls, take some time to meditate on how the Lion energy speaks to your heart.

Consider what kind of spiritual gifts Lion has appeared to bestow on you and how you are meant to work with its energies.

Throughout the ancient world, the vibrant yellow mane of the Lion made it a natural solar symbol.

As such this King of the Beasts comes roaring into our spiritual journey with raw power, courage, and aggressiveness.

But cats are nocturnal. In this, Lion energy also cloaks our spirit in the lunar power of night – when much of the world is sleeping and the Big Cats are everywhere yet unseen, communicating yet unheard and hunting yet immobile.

Depictions of Lions are literally a millennium old throughout the world. Some revered the Lioness as the provider for her pride, and the meaning of providence and hunting skill remains intact.

In Egypt the sphinx has the body of a Lion, which was a sacred symbol of the Goddess who safeguarded the pharaohs in the afterlife. Historians tell us that the playful goddess of dance and protection appeared in early illustrations as having a Lioness’ head instead of a domesticated cat. Other beings in the Egyptian pantheon had Lion likenesses including the fierce friend to women and children, Sekhmet and Bast’s son, Maahes a war god.

Middle Eastern stories and art show the Lion as representing great kings. The gods and goddesses in this region also had Lion companions. Examples include Ishtar with a Lion-drawn chariot and Inanna who stands on the backs of two female Lions. This alludes to the Lion as an emblem of great strength and authority. The connection strengthens further when we see the entrance to great cities and temples with Lion gates and flanking statues as protectors.

Chinese Buddhist portray the Lion as a creature of great majesty. It’s believed that Lions safeguard humans from ghosts and demons. As a result the architecture throughout China includes Lions at entryways, standing vigilant guard. The Tibetans mirror this protective nature using the Snow Lion. The key differences is that Snow Lions represent the Earth element instead of fire, but continue having stalwart fearlessness.

It would seem that Lion Spirit has a soft, pussy-cat side too. In the story of Androcles and the Lion we find that kindness to this noble cat is not soon forgotten. After helping the Lion rid itself of a thorn and infection, the Lion returns the favor by refusing to devour the young slave at the Circus Maximus, and openly showing his affection toward Androcles to the Emperor. In this manner, Lion receives additional meaning as devote and kind to those who treat him fairly.

If Lion keeps popping up in your awareness (in physical form or in movies, songs, TV, etc.), it means the question of “What Is My Spirit Animal” has been answered.

When Lion energy presents itself into your life it comes with uncommon strength and vitality. Lion often appears to a person who needs to reclaim their space and take back a leadership role in life. Alternatively the Lion Spirit Animal finds itself attracted to people who are brave and outspoken with leadership potential.

If you meet up with a Lioness the focus is a little different. She will teach you how to care for your pride and get your family working more cooperatively. The Lioness teaches her young all they need to know to fend for themselves without ever leaving them vulnerable. Lioness spirit likes people who nurture and protect the weak.

With a Lion Animal Spirit at your side you’re bound to attract the spotlight with pure magnetism. Spiritual leaders who have a Lion guide aggressively protect their faith against false images. They will also defend to the death the concept of religious freedom and finding God in your own way.

When Lion accompanies you in life you will learn much about banishing fear and self-expression. Remain humble with Lion, knowing that demeanor matters. This feline can teach you much about handling your personal power effectively.

If you have chosen to invoke Lion spirit as your totem animal, be very sure you are ready for the spiritual growth and lessons you may encounter. Just remember, transmutation can be extremely positive or negative so use the lessons of Lion wisely.

Choosing the Lion as an Animal Totem symbolizes your readiness to face challenges head on.

There is a bit of the wild-child in this totem, so learning self-control is also one of this Spirit’s important lesson.

Invoke the Lion when you need to assert yourself or when you feel that a predator is in your territory. Lion spirit supports you with the qualities of confidence and old-fashioned pluck.

As Animal Totems go, a Lion is one of the best for leaders dealing with less-than-cooperative groups as it can give you the courage to make whatever changes are necessary so the Pride is protected.

Because we are all connected on a cellular level, you have the power to reach inside yourself and tap into those parts of you that house the instincts, characteristics and abilities of Lion.

Internalize and utilize Lion characteristics when you want to achieve goals. Reach inside and grasp the inherent instincts and abilities you have to harmonize your energy-pattern with the characteristics of a horse. Simply put, “Be the Lion”.

Lion as a Power Animal runs into our lives with all the power of the noon-day sun. There is no hesitancy here – rather simple knowingness. Lion people know their place in the proverbial food chain and in the world. They are a proud lot with commanding communication skills and a natural knack for leadership.

Walking with the Lion as a Power Animal means being ready for trouble, but not seeking it out.

Channeling Lion energy encourages you to do what is noble and right with conviction. Don’t be afraid to use the Lion’s energy waiting in the grasses of your Aura. Letting even just a little out puts predators on notice, particularly when it comes to your intimate pride. Disrespect is not in Lion’s vocabulary, let alone the word “quit”.

The sacred triad of character traits: honor, respect and gratitude sum up the Lion’s metaphysical associations nicely. Honor means appreciation, respect is earned and gratitude goes hand in hand with walking in this world as a spirit-being.

Mountain Lions appear in the stories of various tribes as the symbol of a wise leader who knows his intention and leads with confidence. Lions are cunning, noble and courageous.

In certain regions Lion Spirit causes fear because of the dangerous power they wield and the fact that the Lion walks in silent moccasins.

The Hopi revere Lion as a sacred guardian for the tribe to whom they look for on-going advice during ritual. They depict him as a great hunter who is strong and fearless in the face of any challenge. This symbolism for Lion translates into Navajo tribes where they likewise consider the Lion Spirit a guardian and protector.

The Zodiac Sign of Leo is symbolically represented by The Lion.

We have a comprehensive library of Leo information so click on the links below to learn more! Also, if you are not a Leo but know a Leo who would enjoy learning more about their Star Sign, we sure would appreciate it if you would share the articles with them!

Leo Compatibility: Leo In Love and In Bed

Seeing a sitting Lion in a dream may portend an upcoming change in your role to that of a leader or teacher. When that happens the Lion reminds you to follow its lesson of leading with dignity.

Visit our Dream Dictionary to learn more about Lions Dreams.

I was not the lion, but it fell to me to give the lion’s roar.
-Winston Churchill

A lion sleeps in the heart of every brave man.
-Turkish Proverb

A goose quill is more dangerous than a lion’s claw.
-English Proverb