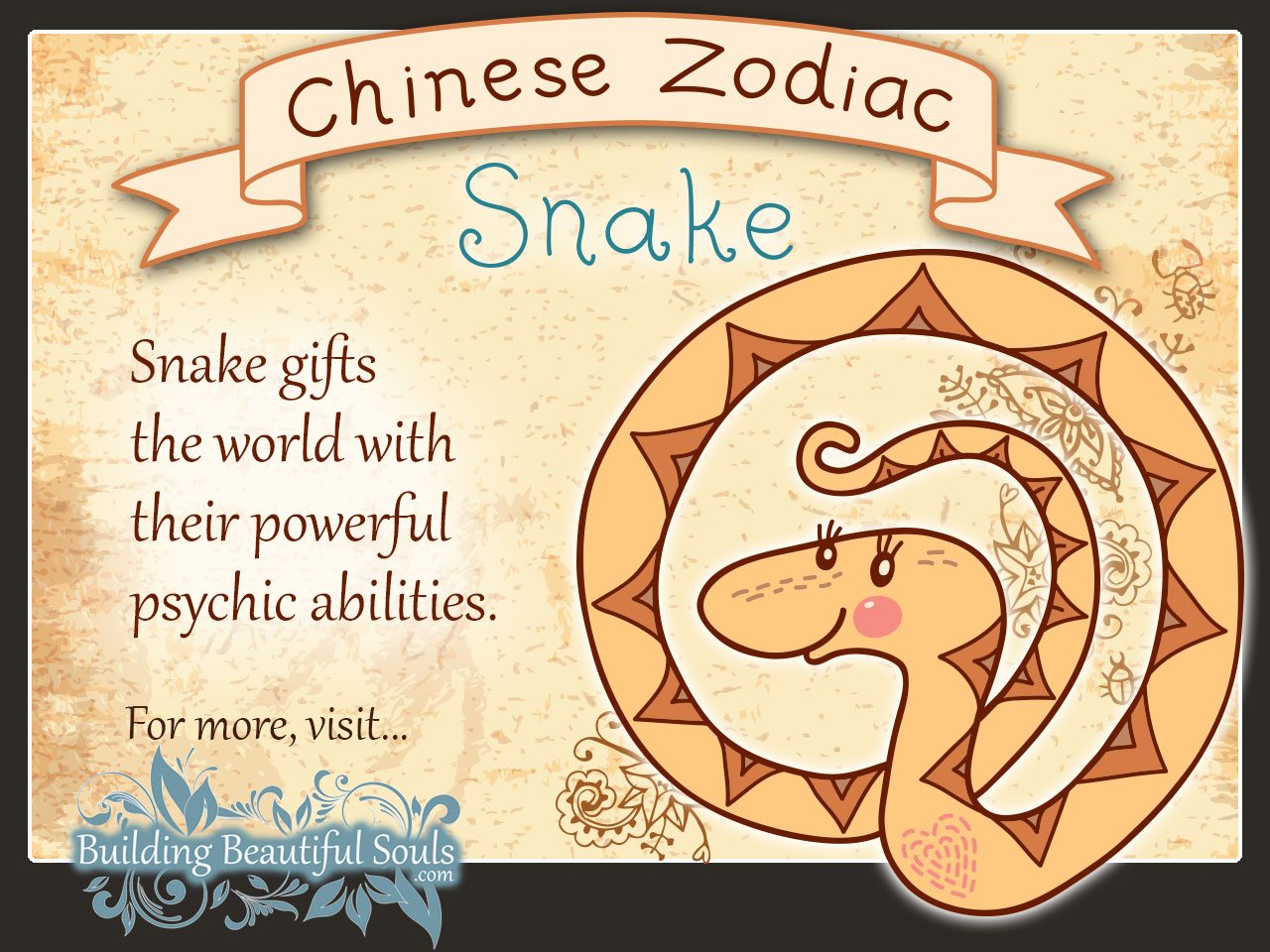 Snake appears in the 6th position of the Chinese Animal Zodiac. The tenor of Snake years gives birth to children who exhibit pliability, wisdom and discretion. Because many humans have a negative impression of Snake, the early years for these children sometimes proves bumpy with crankiness or colic. This will inevitably “cool” down so hang in there.

On the upside, your little Snake has a bit of spunk mingled neatly with a great sense of humor. Parents should anticipate a child that isn’t easy to measure. These kids don’t really communicate their feelings well, being fully content to lie in the grass and contemplate the meaning of life. This secrecy comes from worrying so much, often seeing a problem where none exists.

Being born in the Chinese Zodiac Year of the Snake means your child understands the power of self-discipline. Give this child a goal and watch them tackle it with nearly adult-like practical calculations. Snake continues on this path until achievement manifests.

Socially Snake is not a troublemaker. Your child watches and analyzes everything, waiting patiently for just the right time to jump into the fray. Intelligent? Yikes! Talented? Doubly so. The Chinese tradition tells us that Snake-born children understand fairness naturally. So other children naturally seek Snake out for companionship. One issue for Snake children is that some of their peers envy their popularity and refinement. Parents must teach the Snake how to develop a hard skin without it turning into a hardened heart.

Children born in the Chinese Animal Year of the Snake enjoy good mysteries and excitement (particularly in the form of books). Luck follows Snake especially financially, but this could be their frugal nature eking out. When your Snake is old enough open a bank account for their allowance.

Your little Snake is ever the charmer and knows how to turn that on as easily as a light switch. Thankfully they don’t often use this for manipulating circumstances. Actually, Snake is very generous with others, living life from a philosophical perspective guided by intuition. Chinese Zodiac Snake children appreciated logic, hard work and good reasoning, making them adept at school tasks. The only time Snakes bite is when other people don’t measure up or prove deceptive. Other than that, they are very comfortable with themselves.

Snake children are blissfully capable of handling verbal bullying. After all, this child has a ton of fans who will remind the Snake of their wonderful personality and traits. This idolization follows Snake into adulthood and may even lead to a life of fame, which suits those born in the Chinese Zodiac Year of the Snake just fine.

Character traits of Snake kids include being prudent and shrewd. They take a skeptical look at every situation to make judgement calls. In this prudence wins out, and Snake typically makes the right choices.

The soft-spoken snake is a tad superstitious. He or she sees the mystical world as an intense puzzle. And, akin to a spiritual labyrinth, The Chinese portrait of Snake is a child who navigates life with cautious confidence. At any given moment you may find your little snake staring out into space, woolgathering on life, universe and everything!

Like Snakes in nature, parents can expect Snake to shed their skin as they grow into something new and unique. This doesn’t faze Snake at all. They handle it, remaining cool as a cucumber while moving into a new stage of development.

In terms of socialization, a child born in the Year of the Snake is very discriminating about friends. Friendship is not a simple matter to this child. He or She wants true-blue people, not flashes in the pan. Snake returns this loyalty in kind. Chinese Zodiac Snake kids will always help a friend in need without flinching. The best friends for the Snake child include the Ox, Rooster and Dragon.

Scholastically Snake often becomes the teacher’s pet, being ever diligent in their studies. Snakes are very smart, so learning isn’t difficult on nearly any topic. However, Snake shines brightest when saturated by a topic they love. The aptitude Snake shows come with a strong sense of discipline. You won’t be getting any troubling calls from the teacher.

As the parent of a youth born in the Chinese Animal Year of the Snake you have quite a task ahead of you. Snake has charm, and parents are not immune to it. Avoid pandering to this child’s every whim so they learn at an early age that you are in charge.

In high-pressure situations, your little Snake tries very hard to put on a good face. This sometimes leads to stress-oriented illness. Once you find out your Snake youth’s worries (which isn’t typically easy), you can move forward and calm the storm.

Last but most importantly, remember to feed the child Snake’s mind. Reading books of all genres, listening to classical music, indulging in rich cultural foods – all these things appeal to Snake’s rather refined tastes. These activities bring a sense of peace into a Snake-born kid’s life.

Girls born in the Chinese Year of the Snake are incredibly intuitive and perplexing. Snake listens to her own counsel, mulling ideas in private. Above all else, Snake is determined to meet their goals. Failure is not in this girl’s vocabulary so, as you might expect, it’s met with anger and tears.

Your daughter Snake is pretty wise, making spot-on judgements. She’s also terribly smart. When pressed for conversation, you’ll be amazed at how much knowledge Snake amasses in even one day simply by listening.

Avoid taking your daughter shopping. Young ladies born in the Chinese Animal Year of the Snake will want the fanciest dress, the most expensive shoes and other accoutrements to round out her personal style. Additionally, she’s not the patient sort, so you are really better off buying alone and returning what doesn’t fit.

Among the Japanese, saying someone has Snake’s beauty is a huge compliment. This isn’t the kind of physical beauty, but rather an entrancing aura that captures people in its wavelength. Your daughter will enjoy that attention so be on the lookout for other kids with less than honorable intent.

The Chinese Animal Zodiac portrays Snake girls as graceful, harmonious and romantic. There is something about the child snake that puts you at ease without effort. Charisma and tact are the magic in Snake’s life, and effective tools once she learns how to wield them.

Most Snake daughters love to dance. Twirling with hand-dyed silk to the rhythm of a drum suits her somehow. Accompany this with singing, and this Snake is in 7th heaven.

As the parent of a Snake-born child, you will quickly recognize that this girl acts from her heart when it comes to interpersonal actions and reactions. She has a strong sense of decorum and appreciates a daily routine that rarely changes. Rituals frame her and keep her connected to reality.

Acceptance and approval are the nuclei of the Chinese Animal Snake girl’s life. She will go very far to establish those things, while also encouraging “the best effort” from others. Snake is fair and thoughtful. She will show her family warmth and very real affection.

As sure as your Snake daughter holds mystery, she also likes a good enigma. Those born in the Chinese Year of the Snake are often drawn to religion or spirituality as a result. What greater question is there than “what is my grand purpose in life?”

Finally, be aware that in her mind your daughter is a princess worthy of adulation. She may come across as haughty. This trait becomes obvious as she gravitates toward people she considers wealthy or prestigious. This shortcoming is something that parents can work on, but be subtle. The clever Chinese Snake does not like her plans revealed.

Your Snake son always acts like a little man. He is pleasant, uninstructive and enchanting even among people he doesn’t like. You will notice some feminine qualities about him in terms of grace and quixotic notions. Refinement: thy name is Snake.

Parents, be prepared for wardrobe changes with your boy. The Chinese snake elements in him manifest as wanting to be tidy and clean and having a wardrobe that speaks of sophistication. Any occasion that requires neckties are welcome — look out picture day!

Wherever he goes, Snake boys always hold themselves with pride. You do not have to worry about inappropriate behavior from him, no matter the setting. Even when angered Snake kids somehow smooths things out.

Boys born in the Animal Year of the Snake wear their heart on their sleeves. Their feelings are easily hurt. Your Snake son wants nothing more than peace in his surroundings. Your mission as a parent is helping Snake weather normal daily chaos.

You will not find the boy Snake scrapping in the schoolyard. They avoid confrontation at all costs. As a result, he remains hypersensitive to his surroundings in order to take the path of least resistance. Sometimes this sets Snake up for failure as he becomes paralyzed with uncertainty. With this in mind, encourage your Snake son to come to you when he can’t find an answer or make a decision.

Among family and friends, the child born in the Chinese Zodiac Year of the Snake is kind and gentle. He never speaks harshly and it takes a whole lot of effort to get a rise out of him. When attacked his usual response is a peaceful protest (if that much of a reaction). The boy Snake often becomes the proverbial “yes” man. It’s hard for him to turn anyone down, even if it means putting his needs aside. When someone does a good deed for Snake, he will fall over himself to thank them ten times over.

As the parent of a Snake, you can find comfort in his sense of fair play, honest judgements and sound principles. It’s nearly impossible NOT to love the boy Snake with seemingly boundless patience and an aura that oozes peaceful vibrations.