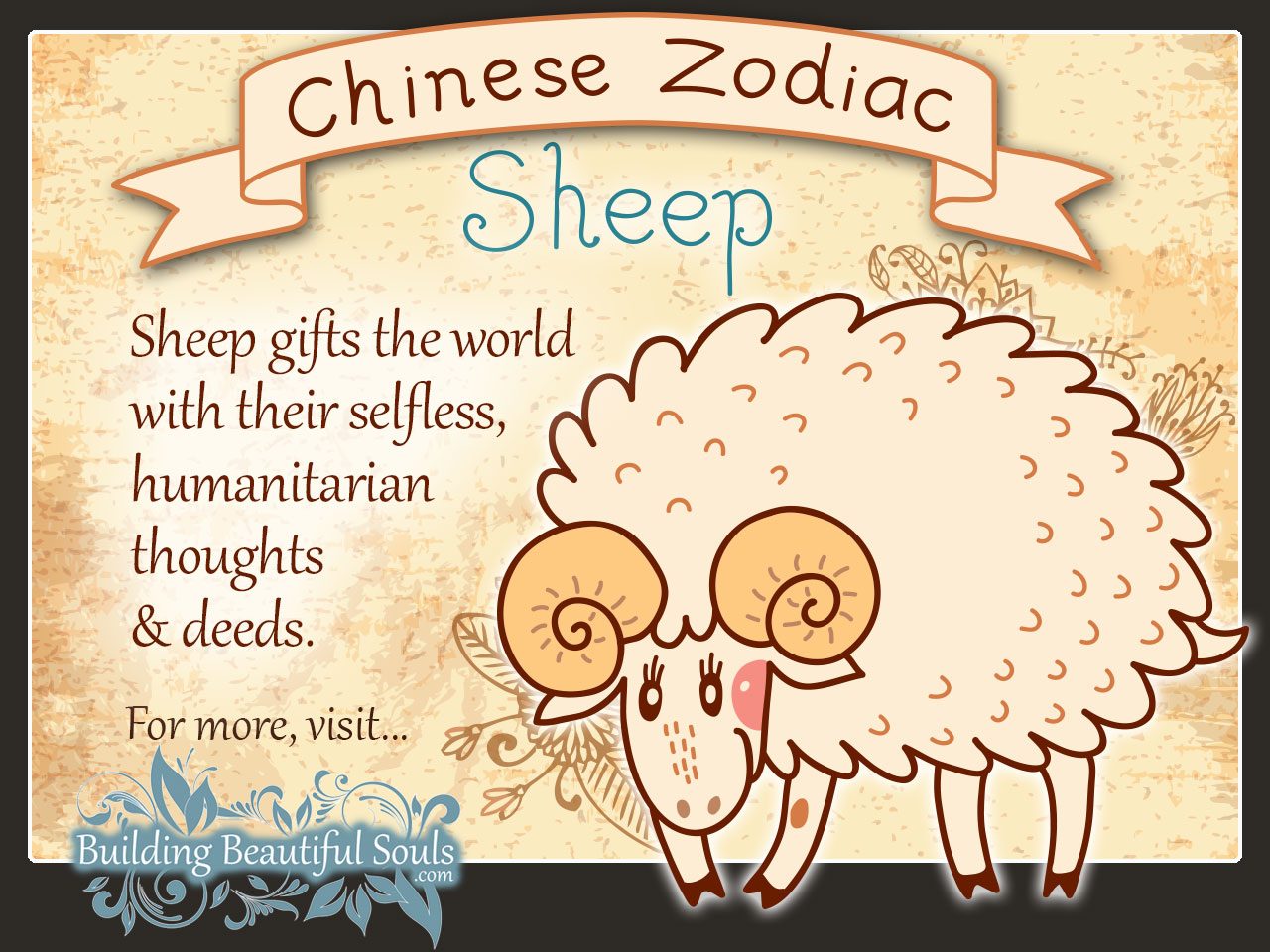 The Year of the Sheep (or Goat) brings in a gentle child who is clever, kind and rather quiet. The Chinese Year of the Sheep youth is one who sees the world with wonder in their eyes. In living with these kids you’ll find an undercurrent of determination, compassion and an undeniable sense of what’s right and wrong.

In some ways, it seems like your little Lamb lives mentally in the clouds. He or she loves pondering all manner of things, which also makes them happy. This woolgathering is when the Chinese Sheep youth feeds hopes and dreams that will drive them forward in life. Sheep adore the arts, learning and teaching. This is the child that shows others how to tie their shoes and make the bow pretty!

In their personal space, the Lamb child has their own sense of organization. Please, parents, don’t be tempted to move things for the sake of ambience. The Chinese Zodiac tells us that Sheep needs that structure and finds it comforting. Plus there is a reason behind this behavior. The Sheep child can be a tad high strung. If they do not “feel the love” around them, they become worry warts. This sensitivity is something that follows Sheep through their whole life, sometimes resulting in anxiety. Having that personal hidey-hole means they have a safe spot in which to unwind.

By the way, Sheep loves dressing up for any reason. They will check every last lock of hair for perfection. This tidy, composed exterior view helps calm the inner struggles and insecurity those children born in the Chinese Year of the Sheep experience. Nearly all Sheep-born children like to take control of situations when they really should simply let go and BE. Encourage this child’s dreams so he or she can manifest some of those in reality.

The best companions for Sheep are Horse, Rabbit and Pig children.

Children born in the Chinese Animal Year of the Sheep have a shy, sweet demeanor. They prefer hovering in the background to being in a spotlight. The only time they really want to shine is on special occasions. Be ready for them to pick out the most expensive outfit of the lot. While you might baulk at first, know that your Lamb will find excuses to wear this outfit again and again.

As the parent of a very artistically inclined child, you often revel quietly by how much beauty this child sees in everything. Those born in the Chinese Zodiac Year of the Sheep are impacted heavily by sensual input, loving the aroma of a spring breeze, the loveliness of a musical strain and the nuances of poetry. The downside of this trait is that the Sheep also recognizes that life, indeed, is not fair. Violence, anger and cruelty seem to impact your young Lamb down to the soul. He or she cannot help but show compassion. This means that parents and family provide security and assurances in an ever-changing and sometimes harsh world. You are the Sheep’s anchor.Sheep children are born with innate work ethics. Prestige doesn’t move them. They are happier pondering inventive ideas that feed their fancy. If they do not have time for this rumination, they may become glum or distrustful. The parent of a Chinese Zodiac Sheep kid can plan on spending a lot of energy on reassuring their child and chasing the shadows away. This effort isn’t for nought. When in their comfort zone the Sheep child is among the most loving cuddle-bug on the block.

If your child was born under the Chinese Sign of the Sheep, he or she illustrates a lot of vulnerability. This attracts strong friends, but it may also draw in the wrong kind of “ally.” The friends that offer Sheep protection are those who often become lifetime companions. It certainly doesn’t hurt that the Sheep-born child’s wishes often manifest without any real exertion!

There are many other lovely personality traits in the Chinese Sheep youth. They are kind to others, appreciate peace (and strive to maintain it), sincere, forgiving and a bit of a romantic. Sheep have a huge heart for animals who they treat with amazing compassion. Volunteering with an animal rights group would be right up Sheep’s alley for expressing this love, while also getting the positive attention they crave.Sheep treasure their inner circle especially for opinions on difficult decisions. Be careful not to offhandedly tease or embarrass your Lamb. This results in the child burying their feelings and looking to a fantasy life away from exposure. One way of offsetting this is getting the Chinese Sheep child involved in some type of art of their choosing. Children born in the Chinese Year of the Sheep have tremendous potential in creative fields. Saturating themselves with a chosen craft also supports self-assurance.

Educationally speaking, Sheep has a reasonable intelligence. The key to their success is avoiding unrealistic expectations. We know from Chinese Zodiac characteristics that Sheep likes competition but doesn’t always recognize when they’re swimming with sharks. When Sheep fails they disconnect, which typically leads to concentration problems.Friendships are interesting with a kid born in the Chinese Zodiac Year of the Sheep. He or she wants attention, but they also nurture those around them in excess. This sometimes puts people off as overwhelming or manipulative. Sheep certainly doesn’t mean it that way, but this child has to learn boundaries and careful use of his or her energies. The child Sheep gravitates toward confident, protective people hoping among that flock one personal champion exists. Horse or Tiger might fit this bill, but Rat just gets aggravated with the Sheep’s indecisiveness.

So what is it like to Parent a child born in the Chinese Animal Year of the Sheep? The big challenge is helping your child achieve emotional equilibrium. From a Feng Shui perspective, Sheep benefits from an open-feeling environment. In terms of discipline, Sheep doesn’t react well if it seems overbearing. Give them a little wiggle room in schedules and rules, and stand by with on-going reassurance.

The girl Sheep exudes grace, humility and a definite presence way beyond their years. She is dreamy, uncomplicated and thoughtfully fluid. Many things in your daughter Lamb’s life get only partially done. She knows she can return to it later and adjust using a vivid imagination. Like any child born in the Chinese Zodiac Year of the Sheep, she will be very indecisive and make you crazy by answering you with soft-toned unfinished sentences. Oddly this is also part of her charm.

In terms of health, your Chinese Animal Sheep daughter is prone to hypochondria. The vibes she picks up from others or a space become her own. As an empath and potential medium, cleansing, centering and rest are vital to her psychological makeup. Parents should remain watchful for addictive behaviors as well.

The humility of girls born in the Year of the Sheep is second to none. She lives, eats and breaths pure honesty. This certainly attracts a fair number of peers to her side, trusting in her congenial air. These same peers, however, may be startled by the Sheep’s psychic ability (which they define as “feeling something”).The Sheep daughter is sweet, mild and innocent. Aggression seems to be a foreign word to her. She often gives way to other’s choices or opinions, despite her agile mind. Mostly this reaction is self-protective, hoping to avoid criticism.

The daughter Sheep is an irrepressible dreamer. She wants nothing more than to find her happily ever after. Her actions follow that goal. There is no fear of kissing a few frogs if it results in the Sheep-born child’s romantic vision.

Sheep is the proverbial Elephant of the Chinese Animal Zodiac in that she doesn’t forget ANYTHING (especially those things you wish she’d forget). This memory benefits school efforts with an aptitude for detailed memorization. Overall the female Sheep is eager to please. She comes to the table with a light heart and gentle soul. She also tends toward over-generosity. Sheep daughters want everyone to be happy, and seeing people or animals in need is heartbreaking. This is a vulnerability in Sheep, but a truly beautiful one.

The boy born in the Chinese Animal Year of the Sheep has a distinctive feminine side, even more so than Snake. He fusses over his appearance. Nothing should be out of place, and he’ll prefer to over-dress for school rather than wearing good, old jeans.

Parents might think that their Sheep-born child is terminally bored with life. This is not true. Rather your son prefers the realm of imagination versus dealing with the here and now. This provides an air of mystery but proves problematic when you’re trying to get him out the door for the bus.

In early years, Chinese writings tell us that boys born in the Animal Year of the Sheep seem prone to the common array of childhood illnesses (something he hates)! As he grows older Sheep turns this memory into a sense of inadequacy especially physical. This leads to laziness and procrastination, particularly as a teen. Like his sister, the male Sheep has a propensity toward addictive behaviors for which parents should watch.

The little Lamb shows signs of uncertainty and bewilderment as to what life is truly about. In the face of trouble or difficulty, those born in the Chinese Year of the Sheep would rather remain under his dark cloud than take action. Conformity thy name is Sheep.Even from a young age, the Sheep-born boy is highly dependent on others for a sense of self. He expects your world to revolve around his needs. This isn’t the best quality, obviously, but it is one that forces the Sheep to keep on people’s good side so he continues getting assistance.

As a toddler, the Animal Sign of the Sheep learns quickly that cuteness and compliancy pave the way to him being fussed over on a whim. Sadly this doesn’t work so well as he grows up. The male Sheep simply isn’t goal-minded. He’s guided by emotion, insecurity and indecision.

As with many born in the Chinese Animal Year of the Sheep, your son has the capacity for great tenderness and sensitivity toward others. He will listen patiently to friends’ woes, hoping somehow to lift their spirits. The young male Sheep seeks nothing in return for his kindness, other than the sense that somehow peace and comfort have been restored. There isn’t a harmful bone in Sheep’s body, and he hates seeing others harmed.All is not lost for the Sheep. Your boy periodically reaches what could be considered genius solutions and ideas. When he makes a choice, he has enough intuitive sense to go the right way (which keeps a lot of potential trouble at bay). The Sheep-born son also sees right through facades and illusions.