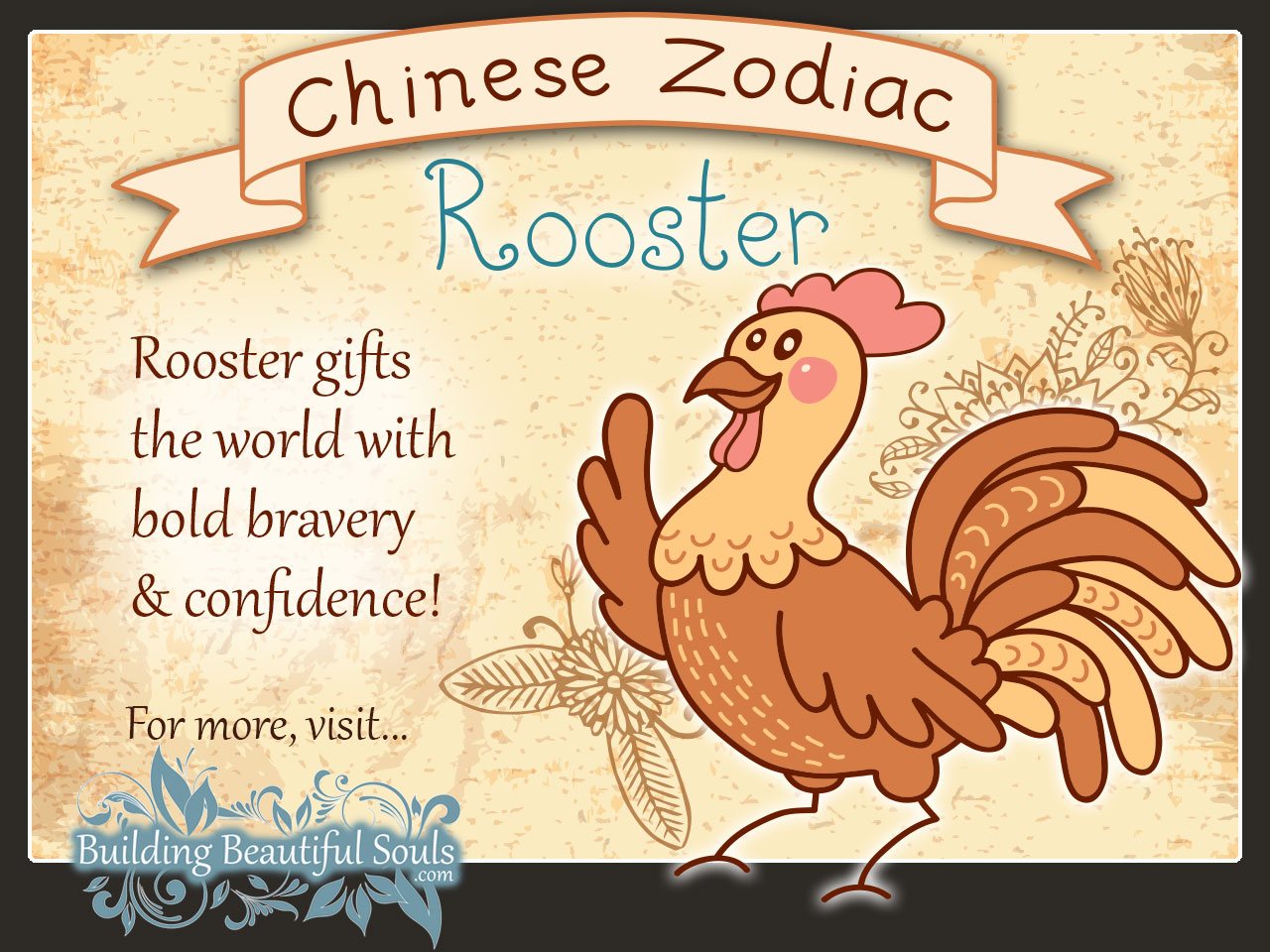 Rooster in the Chinese Animal Zodiac is sometimes called a chicken. Children born in Chinese Zodiac Rooster years have plenty of energy but not all of it is welcome. Inevitably something or someone gets really ruffled by Rooster. Usually, this comes about by a comment or unpopular opinion that the little Rooster was only speaking honestly. Nonetheless, Rooster also represents a sense of confidence, positive outlooks and pragmatism that will benefit any child.

Rooster energy is polarized. When it’s good – it’s GREAT. When it’s bad – it’s AWFUL. There really is no middle ground. That’s why Rooster kids have a flair for drama. The best advice is that you keep your ducks in a row and stay focused with your Cockerel. Otherwise, you’ll find yourself completely out of your element.

Your Chinese Zodiac Rooster child is one of the healthiest people in the roost. They love activity particularly outdoors. This is one way in which Rooster offsets their sensitive soul that becomes maudlin from time to time. A little fresh air goes a long way for improved outlooks.Another characteristic of Rooster years is a strong focus on time: being on time, knowing the time, watching the time, etc. This comes from the watchful Rooster who tells us when the sun rises each day. One of the first gifts your Rooster asks for early on is a watch, oh and a clock for their room!

The child born in the Year of the Rooster is motivated, hard-working and very talented. Generally speaking, they find success in anything to which they put their mind. You may find this character makeup manifests in your child knowing their career paths and personal goals at a very young age. Go with it!

In the Chinese Zodiac, the child born under the sign of the Rooster has many positive characteristics. These include truthfulness, ambition, courage, resourcefulness and keen-mindedness. The Rooster has an independent streak – they like to do things for themselves, which makes for a fast learner. The difficulty here is that Roosters enthusiasm often wanes without a little nudge, turning to apathy or disinterest.Rooster is totally committed to friends and family alike. They will never make a promise unless they know they can keep it. Mind you, kids born in the Year of the Rooster have strong voices like to caw about everything they accomplish. This comes across as arrogant to some, and it’s a tendency parents would do well to moderate.

Rooster children adore socialization. Any occasion where they can shine brings out the most beautiful of Rooster’s feathers. Note that if Rooster wants to talk, they expect others to pay heed. Attention-seeking behaviors in children born in the Year of the Rooster can lead to exhausted parents.

The best playmates for Rooster are children born in the Year of the Ox or Snake.

So what is your Rooster baby going to be like over the years? Well, it’s certain that they like sticking to a working formula even if its different than everyone else’s. Children born in the year of the Rooster are ingenious, observant, detailed and cautious. Parents may think that the little Rooster is a budding psychic because of their attentiveness, but really they just keep their eyes and ears open. If something is the least bit out of place, they know it and put it back.

The Rooster child isn’t secretive about their feeling or thoughts. In computer terms, they are WYSIWYG (what you see is what you get) kids. This is a relief because parents don’t have to second guess whether this child is telling the truth. There is a caution for mom and dad here. A Rooster kid’s temperament attracts slippery characters. Most of the time their sharp eyes catch the trickster before any harm, but it doesn’t hurt to have vigilant parents.

Even in developmental years, Roosters are the control freaks of the Chines Zodiac. They expect perfection in themselves, particularly in their appearance. Do not question their choice of clothing for the day or hairstyle! That will send them spinning. He or she is the fashion statement among their peers even if it’s one of their own making.

A child born in the Chinese Year of the Rooster is a dreamer with all kinds of plans. His or her hopeful demeanor combined with detailed planning helps them achieve those plans quite often. They jump into motion fearlessly, even if the proverbial water isn’t in the pool.The Chinese Zodiac Year of the Rooster has vibes that are very social. When out and about your child loves having companions, particularly complimentary ones. At home, you never have to ask them to tidy up their things or clean their room. They love order. It provides Rooster with a reliable comfort zone. With family and friends, Rooster is loving, kind and trustworthy. They go out of their way to delight others, sometimes too much. Rejected efforts create a very unhappy Rooster.

Rooster-born youth exhibit a stubborn nature upon correction. They hesitate to believe they could be wrong. Rooster is among the most prideful of Chinese Animal signs, so be ready for some power struggles.

As the parent of a Chinese Rooster Sign be prepared for the “I cannot be wrong” attitude. All that knowledge comes pouring out when Rooster has a point to make. It’s like watching a debate with Einstein! This child would rather continue bringing up points than admit wrongdoing.Chinese character students tell us that Roosters are known as being decisive, funny, unconventional, tidy, opinionated and dramatic. All of these attributes actually work in the Rooster child’s favor. This kid loves to work and put all of their energy into projects. Sometimes you have to remind Rooster to come to the table and eat because they’re so focused. Scholastically Rooster learns quickly and focuses on his or her work. The love of learning drives education forward. New subjects are always met with genuine excitement.

Rooster also excels in pride. They walk tall and proud, shaking those tail feathers. Self-moderation really isn’t a Rooster’s forte. This can make for a rowdy child that requires redirection.

A Rooster daughter runs hot and cold. She will never be “ordinary” by any means. This makes her an enigma that some people enjoy. Friends hope to someday see what’s behind the curtain of her character fully.

The Sign of the Rooster in girls often manifests as an aura stretching far beyond her body (meaning she enters a room long before she enters a room!). That intense presence either attracts hopeful friends or disturbs people with its unsettled nature. She comes across as cryptic and likes it that way. Her secret self is a Witch, wielding charm as her power.

A girl born in the Year of the Rooster shows physical strength and hardy constitution. The term willful doesn’t even begin to cover it. Her energy keeps you hopping… running…. sprinting to her next adventure. The danger here is that she may burn herself out unwittingly.

Girls with the Zodiac Sign of the Rooster do not forgive easily. She remembers every jot and tittle of disagreements with friends, often pushing them away. Rooster’s secret nature may lead to vindictiveness if not guided by a firm parental hand.As the Rooster-born young lady matures she illustrates an air of authority. She is aggressive and intense and despises failure in any form. Her temper may prove as fiery even as her tears drench the pillow. Rooster speaks from the hip, sometimes caustically. In her world truth is not couched in sympathy or pretty words. Direct – thy name is Rooster.

Mentally your daughter has more intelligence than average. She calculates quickly, translating the most difficult of concepts into a functioning idea. This Rooster sees the truth in situations and people with incredible clarity, to the point of it making some people antsy. Your Rooster-born daughter is often too serious. She needs a lesson in laughing at herself and the world. Without this, she will never garner the attention of others that she craves.

The greatest gift parents can give the girl born in the Chinese Year of the Rooster s teaching her how to apply her endless energy in constructive ways, particularly humanitarian efforts. This balances out some of the potential negative traits and replaces them with a passion and joy.

Your son the Rooster has as much energy as his sister. He naturally moves into sports venues that offer a challenge and physical expression, martial arts being an example. This is a very good thing for your Chinese Rooster child who is otherwise restless and edgy.

Boys born in the Year of the Rooster have penetrating gazes. It is as if you can hide nothing from them. Truthfully, that’s pretty much the case. Rooster watches, remembers and acts accordingly.

The Rooster boy has been known to be prone to illness, which irritates the heck out of him. He does not like being sick. Those born in the Chinese Year of the Rooster make terrible patients who detest slowing their normally aggressive activity level.

Parents find the Rooster son extreme in emotion, thought and action. There is no middle ground with him. Whatever the matter at hand, he is either “in” wholeheartedly or totally “out”. This comes from a strong sense of what the Sign of the Rooster enjoys and what he abhors. It is a clear line in Rooster’s sand as are his opinions.

Rooster children often prove secretive, not wanting to show anyone, even parents, their true feelings. His personal convictions are carved into the cornerstone of his soul. There is no need in Rooster’s life to wear these feelings and ideas on a proverbial sleeve. In other words, parents, you have to work to get to know your child intimately. Oh, and be forewarned as tight-lipped as he is about his own secrets, he knows full well how to pull them out of anyone using observation and his impressive communication skills.If the Rooster boy had a motto it would be “hard work makes good magic”. He truly believes that personal effort makes or breaks our destiny. There is no room in this mental construct for people who hold him back, making him seem ruthless at times. The opposite of this is when a boy born under the Chinese Zodiac Sign fo Rooster moves into a benevolent mood. Then he becomes devoted to a cause for which he gives 200%.

Your Rooster son shows no evidence of being shy or the least bit unconfident. Obstacles are a welcome challenge to him. When frustrated, The Sign of the Rooster loudly calls out in a rare moment of openness (but one laced with irony). Rooster isn’t any good at apologies either.

While this review seems rather glum on the Rooster son, parents can know he has a strong practical edge. He likes facts, avoids flights of fancy and sticks to trusted methods in all he does. Rooster will never break his word to you, and once Rooster takes you into his circle you will find a spirit that does everything possible to make you happy.