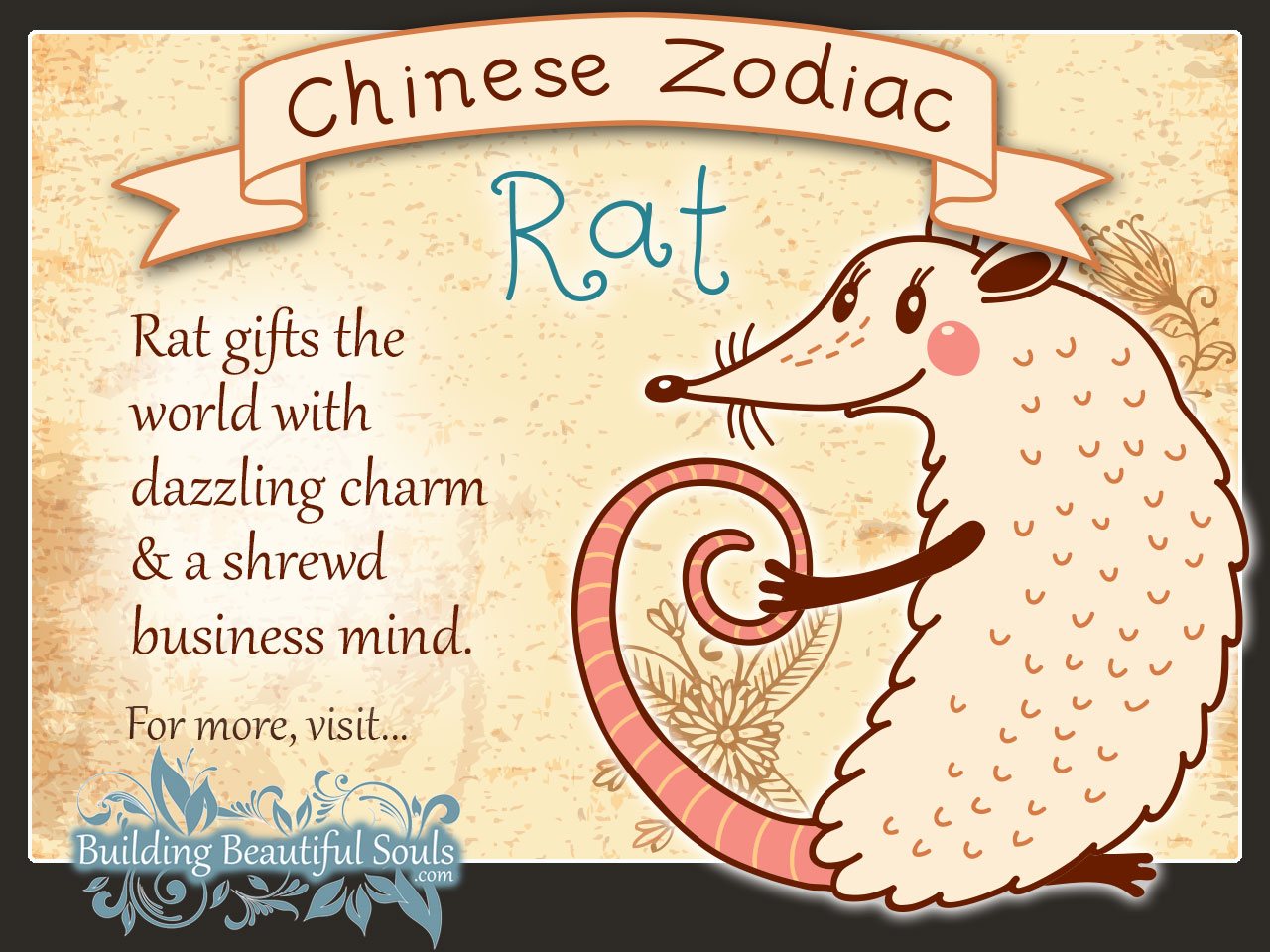 The Year of the Rat is the first Zodiac sign in the Chinese Animal Zodiac tradition. Rat energies, on face value, incorporate wisdom, practicality, ambition, providence, and pleasantness. Often when the year of the Rat rolls around, it heralds a time of economic focus, opening lines of communication and sound ways to ensure the on-going survival of family, jobs, goals etc. he child Rat particularly teaches the lesson of adaptation (change is the only thing on which we can depend). In order to adapt, the Rat keeps his or her eyes peeled and tail neatly tucked under.

Children born in the Chinese Zodiac Year of the Rat love showing their feelings toward trusted people, while remaining shy with strangers or those relatively new to their social circle. Be prepared for everyone to coo at your baby Rat. From the get-go, these children charm the pants off everyone. Truth be told, Rat enjoys the attention but demurs about it cloyingly. The hard part about this charisma is that it has an evil twin called the temper tantrum. When the child Rat can’t win their case with wit and magnetism, they will create a ruckus to get the desired attention, and hopefully their preferred outcome. The other alternative to the temper tantrums is making you feel like the center of the universe and never leaving your side. These kids are smart cookies and may become emotionally manipulative if parents aren’t on their game.

Don’t get angry with your little Rat if they seem like they are always in perpetual motion. Staying put for minutes seems torturous at a young age for Rat. Parents can work on “quiet” tasks in small portions, slowly increasing the time so by their school years they won’t drive the teachers crazy.In the Chinese Animal Zodiac characterizations, Rat children are the worker bees. They put their heart and soul into any goal, ever striving for perfection. You do not have to worry about your scholastic Rat forgetting to check his or her work (twice!). Rats are also family oriented. In a loving home, they thrive but may talk your ear off sometimes. One thing to watch for in your child is a propensity for gossip. They love gathering pieces of information but aren’t always aware of what’s true, or for that matter potentially hurtful.

In a social setting, the child born in the Year of the Rat appears laid back and carefree. Internally they are usually in command of themselves, so much so that they become leaders in their “packs” in neighborhoods and schools. Rats love learning along with a good mystery. These children have natural willpower, diligence and fortitude, meaning they often achieve exactly what they desire but it’s not without hard work.

Chinese writings about Rat personalities indicate that Rat-born children are uniquely agile when it comes to adapting to change. Adaptation is part of their DNA, as is a sharp-as-a-tack intelligence. When Rat goes out to play always get a commitment on where they will end up later. With this child, the playground is only a starting point for adventure.

One nice thing for parents of children born in this Zodiac Animal Year is that these kids find it nearly impossible to lie, even if it would keep them out of trouble. They also prove quite thrifty, preferring the 2nd hand coat to a higher price tag. Hint: Always make room in your Rat’s life for trinkets and oddities, no matter how insignificant they seem to you. This treasure trove is part of Rat’s heart and soul. Each item has meaning. Whatever you do, never randomly throw away part of this collection or you will have the saddest Rat in the entire world weeping uncontrollably.

Parents of the Chinese Rat child should be relieved when they discover their child has strong instincts about trouble. It’s as if they hear a bell going off and immediately respond in defence mode, including running away to a safe hole. This is part-n-parcel for an inquisitive child; without that aptitude, they would end up in many more prickly situations.

As your youth born in the Zodiac Sign of the Rat grow you may notice a knack for budgeting and language arts. When old enough, get them a saving account and watch with amazement. Give them books and a journal, and Rat finds joy for hours on end. It is not surprising to find young Rats attracted to various forms of public communication and intensive writing. Who knows, you may have another William Shakespeare under your roof (who was also a Rat).

In terms of Rat child’s friendships, they are loyal and caring down to their toes. They truly consider close friends as family members with whom they fully intend to spend their entire life enjoying. Those born in the Chinese Zodiac Year of the Rat hate spending too much time alone, which they shouldn’t do. It zaps all that enthusiasm and turns it into melancholy. The Chinese Zodiac animal signs that make the best friend for your Rat include Ox, Monkey and Dragon.

For health-conscious Rat parents, you will be relieved to know that generally, your child is resilient. The Zodiac Sign of the Rat has high activity levels keeps these kids in good shape and supports their immune system. Rats benefit from a well-balanced diet, which improves their concentration at school and also helps with handling stress. When your Rat child experiences an extended period of tension, make sure to give them a well-deserved break for some fun. The only thing Rat seems somewhat susceptible to is respiratory infections or skin conditions. This usually occurs when the air is very dry.Throughout their young life Rat kids loves a sense of achievement. Those silly gold stars sparkle all the more brightly in this child’s eyes. The better they become at any task, the bigger the smile. The hard part for parents is seeing their little Rat berate themselves for the slightest of mistakes. The heart of a Rat is very sensitive, and you will have moments of having to heal their sadness in some way.

Girls born under the Chines Animal Zodiac Sign of the Rat will never be hearts and flowers gals. Rat prefers reality and substance in friends, projects and goals. Pie in the sky doesn’t suit Rat girls. If they set a goal they feel confident of achieving it.

The early years of the Girl Rats’ life fills with a craving for socialization. She needs connections, especially in her family unit. Fluff and superficiality aren’t in Rat’s vocabulary from early on. If a person comes across as shallow, there’s little interest in fostering a friendship, particularly with those born in the Year of the Horse. That means parents have to be direct and honest. Rat gals may not always like what they hear, but, if it’s the truth they respect it.

At home, the Rat daughter loves helping with social events. This is probably because she knows that her outgoing nature provides a lot of positive attention. This is important for Rat, as without that support a lot of self-doubt creeps in, undermining the amazing adults these kids can become.Parents of the female born in the Year of the Rat know that their child always seems composed. They also know this is a ruse. The Rat’s mind is always running 100 miles a minute calculating potential outcomes for everything from picking flowers to braiding hair a certain way. Don’t be surprised if she is the first child on your block to open a roadway stand, offering bargains and still making a profit.

Whew. Ok parents, hold on to your seats because this is going to be a wild ride. Your Rat child is the risk taker of the Chinese Animal Zodiac. By the age of 7 we can nearly predict with certainty that the boy would have had more than a few bruises, scrapes and broken bones. You know that apple on top of the tree? Yep, he went for it. Why? Because he wanted it!

This craving for specific things follows the boy born under the Sign of the Rat throughout life. Where some children are content to play in the sandbox, he’s building a four-star hotel in it. When people swim at a beach, he hunts for buried riches. It’s interesting to take the boy Rat to flea markets just to see what treasures they find in the oddest location.

The young rat son also acquires things for others (using his allowance if need be) because of the pleasure in giving gifts. Parents need to be aware of this and stay on the look-out for greedy kids using this kindness. Even with a generous demeanor Rat is very selective with his friends. The ones he chooses will be those with very similar or complementary interests. No matter the space or place, Rat-born sons can talk their way out of anything, and get people to come right along with him.

If your son feels odd about a situation or person, pay close attention. The Chinese Zodiac Sign of the Rat is known for having a nose for trouble. Even at young ages, it’s hard to pull the wool over Rat’s eyes. Like the sinking ship, follow him when he chooses to flee instead of fight. So doing also gives the Rat more confidence in those gifts, which he will then continue to hone through to adulthood and beyond.