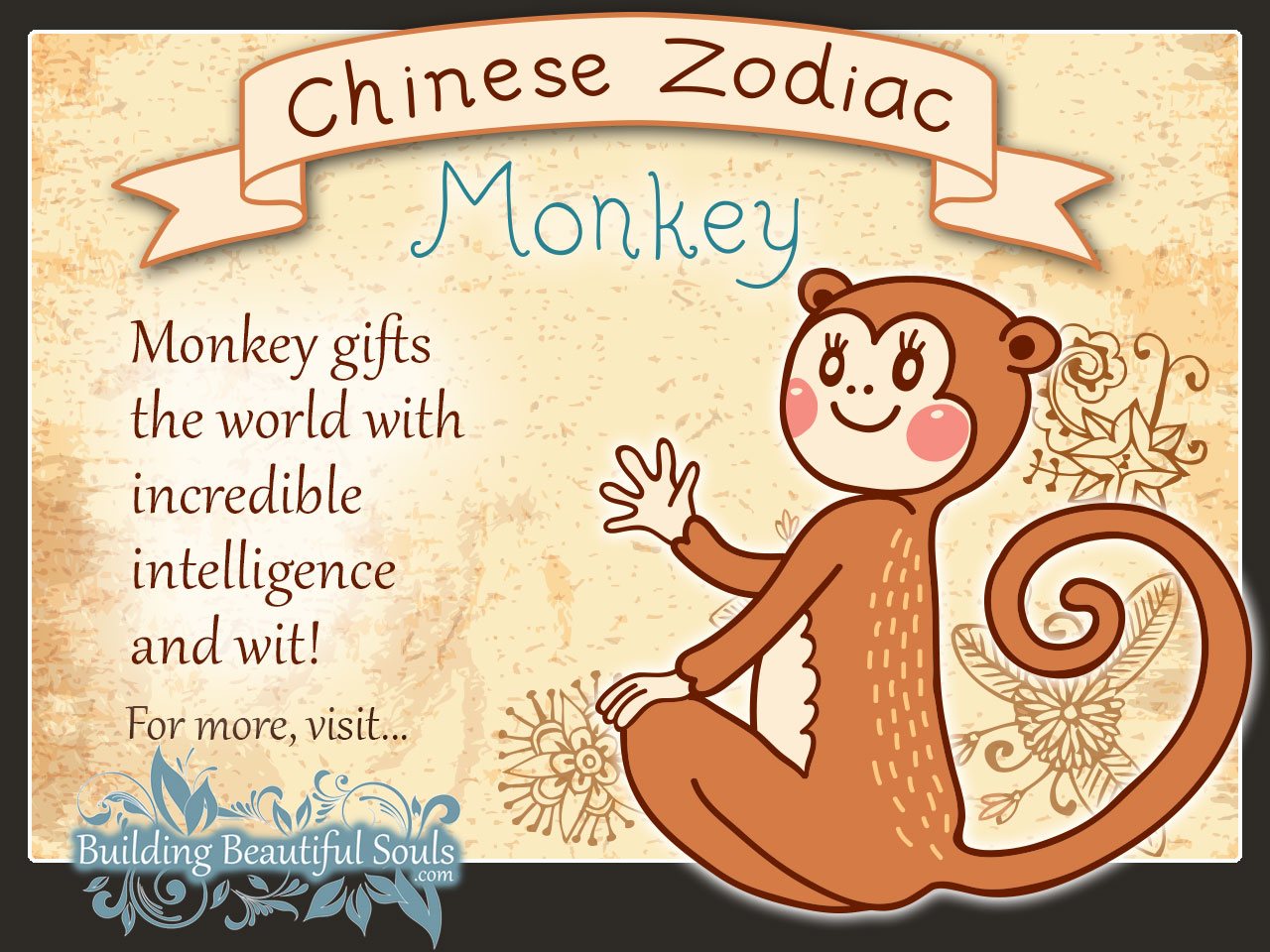 When the ninth sign in the Chinese Animal Zodiac rolls around, prepare for some well-meaning shenanigans, mischief and humor in those children. The Year of the Monkey is nearly as unpredictable as the curious creature that bears its name. Monkey kids are smart, clever and auspicious according to Chinese tradition. Nonetheless, these young ones certainly love a good prank, putting Monkey years into the category of the Trickster.

The Year of the Monkey is excellent for focusing your child’s intellectual development that, in turn, supports personal goals. Versatility is the name of the game in Monkey’s year, along with bare-bones honesty. The main caution with kids born in the Chinese Year of the Monkey is that their impetuous energy can become arrogant instead of enthusiastic. A little social guidance from mom and dad here should help.

Your Monkey child is full of charm, positive attitudes and dramatic flair. They always seek what makes them happy and feels liberating. When Monkey-born children do land in trouble they often talk their way out of it with clever banter. Parents find themselves challenged by this child in that they want to do 10 things at once, and try everything new. New games, new foods, new subjects – all appeal to kids born in the Chinese Year of the Monkey.The Chinese Animal Year of the Monkey has vibes that really jazz up a child’s creativity. Inventive projects, when chosen wisely, typically come out wonderfully. The Monkey child is full of spunk and energy. They love to play and truly look forward to any social parties to which they are invited. Like any Chinese Zodiac Monkey, your child likes to swing from tree limbs and other engage in other vibrant activities that may land them with more than one scrape. This propensity sometimes attracts peers who are looking for a little naughtiness. Rarely is your Monkey spiteful, though. They have a keen mind and know how to listen to ideas and instruction. This aptitude comes from the energies in the Animal Sign of the Monkey that manifest in a child’s thirst for diverse knowledge that they use for impressing family and friends.

Chinese writings on the Animal Sign of Monkey tell us that these youths sometimes have sharp tongues or act without thinking. This means they may hurt a dear friend without even knowing it. Worse, it’s hard for Monkey to admit when they’ve done something wrong. As a parent, you can help this child best by reining in the ego and supporting greater sensitivity.

People in China favor having children in the Year of the Monkey as it’s a fortunate sign. Women have been known to delay birth hoping to have the positive energies of Monkey for their child. Monkey is said to be clever and wise, which relates to the Chinese novel, the Monkey King. In the tale, Monkey overcomes evil spirits with sagacity and delivers his companions to the West safely. Here we see a social element in the Monkey child. They have an innate desire for helping and safeguarding their friends.The best play pals for the Monkey are Ox and Rabbit.

The Monkey child has the potential for acquiring great skills. You know that up-coming science fair? Don’t sweat it – a ribbon is just around the corner. Of course, this knack puts Children born in the Chinese Year of the Monkey in favor with teachers and parents alike. Monkey is hardy too, rarely getting sick (and when they do, they really don’t complain much).

A child born in under the Animal Sign of the Monkey may grow exasperated sometimes, and end up lashing out temperamentally. This is probably the largest challenge for Monkey. They must develop patience in order to achieve their full potential. Thankfully this characteristic is offset by your little Monkey making sound choices and showing thoughtfulness in family interactions.

The Monkey’s cheerful disposition bundles together with other wonderful personality traits to those born in the Chinese Zodiac Year of the Monkey including honesty, energetic, loyalty and generosity. When given a task, your Monkey child sees it through relentlessly and faithfully, taking pride in their efforts. Monkey LOVES a good challenge because this child has a strong sense of self. It’s difficult for anyone interacting with Monkey not finding themselves wholly entranced by their charm, humor and curiosity.

Be forewarned, mom and dad. This child knows exactly how to push your buttons if you’re not on point. There is a little rascal in every Chinese Zodiac Monkey kid. Even when pulling the wool over on you, Monkey remains totally lovable. He or she has more than enough energy and ambition to tire anyone out. Be sure to have a lot of fidget style toys around the house or on any road trip. Sitting still isn’t really in Monkey’s wheelhouse.

Your Monkey child has an inherent joy for life. This is what makes it hard for anyone to stay angry with kids born in the Year of the Monkey. One smile wipes away most of the bubbling frustration and replaces it with humor. Those born in the Chinese Animal Year of the Monkey make friends easily, typically with people who also want to engage in a little monkey business! Don’t worry too much over this. Monkey proves picky about friends, keeping a trusted few close.Things will never be boring with Monkey around. This child is sociable, cunning, ingenious, confident, impetuous and sharp as a tack. If you think Elephant doesn’t forget, try a Monkey-born child’s memory. Watch what you promise!

Monkey children flourish in school. They are typically at the head of their class, illustrating a fine intelligence and ability to learn. Monkey especially blossoms in foreign languages. The only struggle here (and at home) is that Monkey is not fond of discipline. They sometimes become class clowns and would do well to tap into a smattering of humility. The arrogance known to those born in the Year of the Monkey comes from easy success in life even early on. They begin to expect it and may look down upon another’s “second-class” efforts. Once Monkey sees that he or she cannot rule the whole jungle, Monkey “do” comes out to play.

At first glance girls born in the Chinese Year of the Monkey seem kind and welcoming. Her eyes truly reflect all that’s in her soul. She moves in grace, without halting or awkwardness unless angered. At that point all hell breaks loose.

Your Monkey daughter has a defined rebellious side and seems a tad eccentric. This child is ruled by her heart. When she is happy, the world is her banana. When sad or stressed out, Monkey curls up somewhere safe and broods. During these periods, Monkey-born girls have trouble sleeping and may break out with hives or pimples as a physical reaction to nerves in overdrive. To avoid this, parents can teach their daughter how to relax and move through days more slowly. Avoiding caffeinated drinks doesn’t hurt either.

Your Monkey daughter is a walking paradox. She has many facades and chooses what she shows to people depending on the circumstance. Some days she seems very mature, while others the inner child is running with scissors. That is true to the Chinese Animal Sign of Monkey. An impulsive nature often causes chaos in the home and among friends.

When the inevitable bumps and bruises come in life, she picks herself up neatly. She has no trouble moving forward and even becomes excited about what’s over the next hill. Her love of new things helps her recover quickly from setbacks.That’s not to say Monkey has no redeeming traits to offset these inconsistencies. She is a good friend, generous to a fault, brave, determined and tender. Realistically, the girl Monkey struggles between heart and head constantly. It’s no surprise that your daughter born in the Year of the Monkey dislikes conformity.

Monkey can be quite the adept diplomat among her peers. It seems easy to survey other’s opinions and find a fair resolution. However, don’t expect that kind of calm measuring when it comes to her own beliefs. Those any child born in the Chinese Animal Year of the Monkey clings to ardently.

In some ways your daughter is starry-eyed. This Monkey believes a better day will come. She trusts in the human ability to change for the better. This makes your Monkey daughter well-suited for neighborhood charities and social projects.

The boy born in the Year of the Monkey literally exudes compassion and kindness. It is part of his very aura. This means that people feel comfortable around this child, his good manners and innocent outlooks naturally drawing in family and friends alike.

A Monkey son always seems composed. Do not let that fool you. His tolerance may quickly turn to anger if the Monkey feels that justice is not served. Like his sister, this guy charms with a wink and a smile. Monkey-born boys prefer speaking softly and have the habit of swallowing words, which brings out ire that they later regret deeply.

Your son is a careful and thoughtful child. Nonetheless, being born in the Chinese Year of the Monkey, he may be prone to bouts of daydreaming. You may have to reign him in to focus on important tasks.

Boys born in the Chinese Zodiac Year of the Monkey are notably unpredictable. Your son is not a cut-n-dry personality. He often lives in his mind, thinking about complex things. Yet his heart still yearns for its own voice. Monkey also craves independence and free thought. He will not adhere to rote customs, preferring to make new ones or ignore them altogether.One of the most important things you can give your Monkey son is lots and lots (did I say LOTS) of activities. This child does not like sitting still unless there’s something keeping his attention. Even then he fidgets in his chair or gets up for snacks before returning to complete things.

The Monkey child has the soul of a visionary. Like most people of that proclivity, he is often misunderstood even by himself. There will be times when your Monkey gets confused by his own changeability. This is the point when mom and dad can step in. Those born in the Year of the Monkey respect parental guidance, especially in these moments.