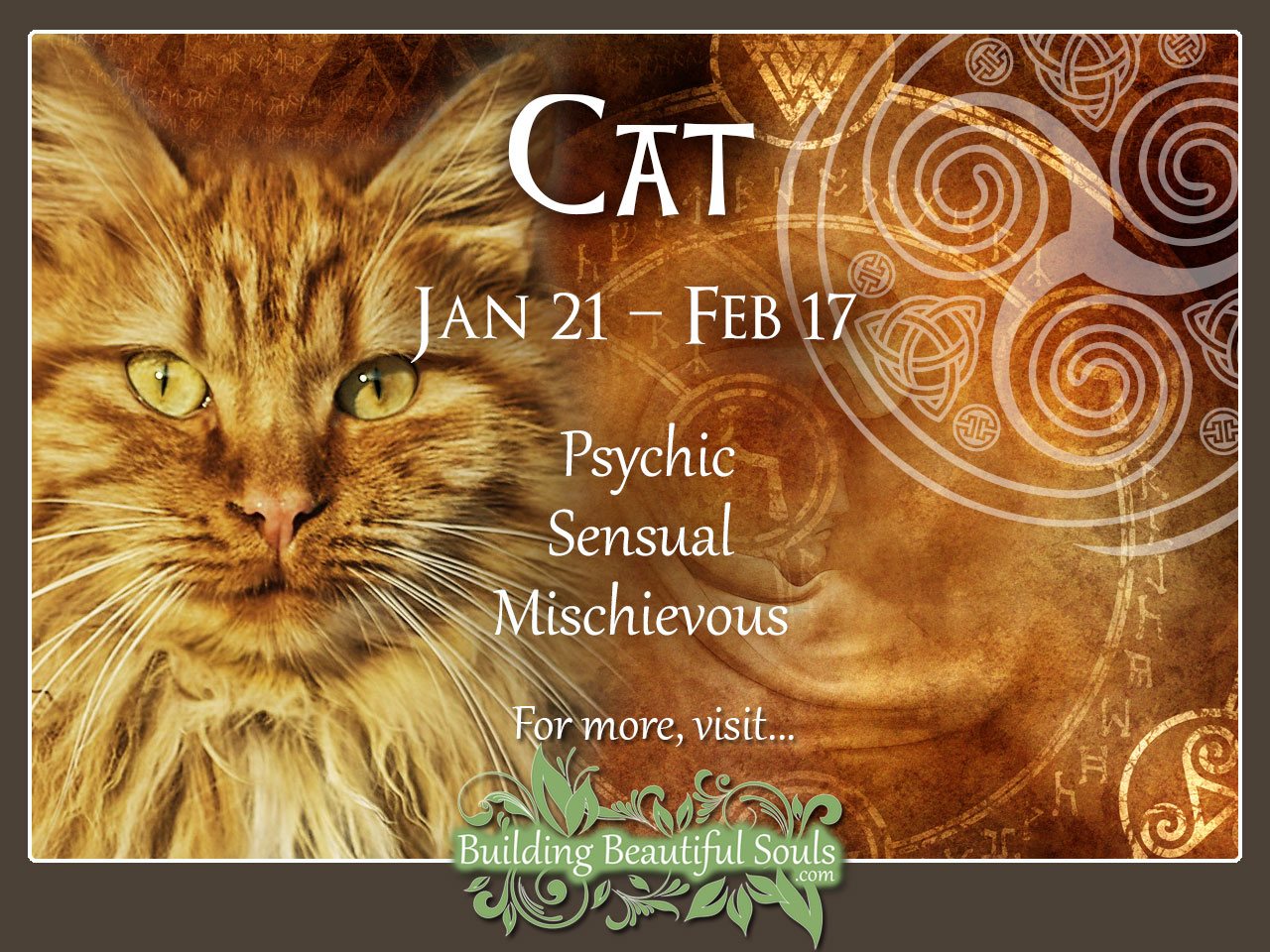 Ah you crafty Cat, you. People born under the Celtic Zodiac sign of the Cat have fine minds. Your intelligence and humor serve to charm, intrigue and sometimes confound those around you. There is very little that takes a Cat off kilter. Landing on your feet? You bet!

As with most Pussycats you love attention on your terms. When you want alone time, no one can find you. And when the environment becomes uncomfortable your swift movement takes you well out of the lime light until you’re ready to re-engage.

If this is your Celtic birth sign you love a bit of mischief in your life. This is not done with malice, but rather playful glee. You love setting up surprises and watching them unfold. If shiny ribbon is involved, that’s even better, but for the fact that you might end up wrapped in it yourself.

Cats are very psychically aware to the point of making people nervous sometimes. Your whiskers twitch when something is afoot, be it good or malicious. You answer people’s questions before they even ask, and can look at situations from various perspectives before forming a conclusion. In fact, observing is a hobby in your life. You love gathering information and tucking it in your pocket for just the right moment, especially if it means helping a friend in need.

Cats express themselves vocally and through body language. No one has to worry about wondering what’s on your mind unless you decide to keep a secret. After all, in Celtic stories cats often guarded the gateway to the Otherworld or Underworld. Here they remain mysterious and hushed, awaiting new arrivals, and holding their understanding close to the breast.

In a world that often doesn’t want to see beyond concrete reality, Cat people can be misunderstood. They come across as esoteric seers, slightly erratic and unpredictable. Being unorthodox comes naturally to Cat along with a hearty dose of creativity and frolicking.

The Celtic Cat sign is one that speaks of illusion. Cats can’t be fooled into folly. They distrust ignorance and have no desire to flirt with false dogma. Cats inspire us to trust our inner voice rather than ignoring its warnings. It is within that Cat discovers personal truth.

Its interesting to note that Celtic Lore often depicts the Cat as part of the fairy world – fierce and protective, surrounded by magic. When Cat feels threatened be ready for an arched back and killer claws. While Cat people don’t like to fight, they will when cornered and it won’t be pretty.

Celtic mythology connects Cat to the Goddess Ceridwen, who embodies wisdom and enchantment, and gave birth to the wondrous bard Taliesin. Cerdwen oversaw a cauldron of inspiration, some of which has splashed onto Cat people and manifests in surprising ways. Cat people may also bear messages from the Goddess into the mundane world so pay attention to those purrs.

The Sacred crystal associated with those born under the sign of the Cat is Amethyst. This vibrant purple stone opens the third eye chakra, which explains a lot about the Cat’s psychic abilities. Amethyst is also associated with a keen mind and high intelligence for which our Cat people are widely known.

The flower for the Celtic Cat sign is Violet. Not surprisingly this pretty little thing plays a role in Fairy tradition. Again, this illustrates the strong ties between Cat people and the world of Devas and Spirits. Ever wonder what your cat cases in the middle of the night? Now you know what that “nothing” may be!

The sign of the Cat is amazingly analytical. While you might think this person is acting on a whim (and sometimes they do) there is still a thought process involved somewhere. Cat people aren’t needy in terms of attention but they can be incredibly loving and sensitive. Their charm is nearly irresistible. One of the best attributes of Cat people is saying what they mean, and meaning what they say. There is never a question as to an honest opinion, even those that cut to the heart of a matter.

Celtic folk tales tell us that people would use catnip to lure cats away from bodies. This came from a belief that the great Cat Spirit could claim dead souls. Another offering to Cats was the saucer of milk, which insured Cat Spirit would keep the cows healthy.

What this tells us about our Pussycat is that there are ways to get in her good graces particularly through aromatic or tasty treats.
There is no question that Cat held a special place in the Celtic Soul. Cat is seen as a fine companion. These people are stealthy, profound and steeped in magic. Druid priestesses were said to have a special type of Cat medicine that helped them reach out to other realms, those that Cat people see naturally.