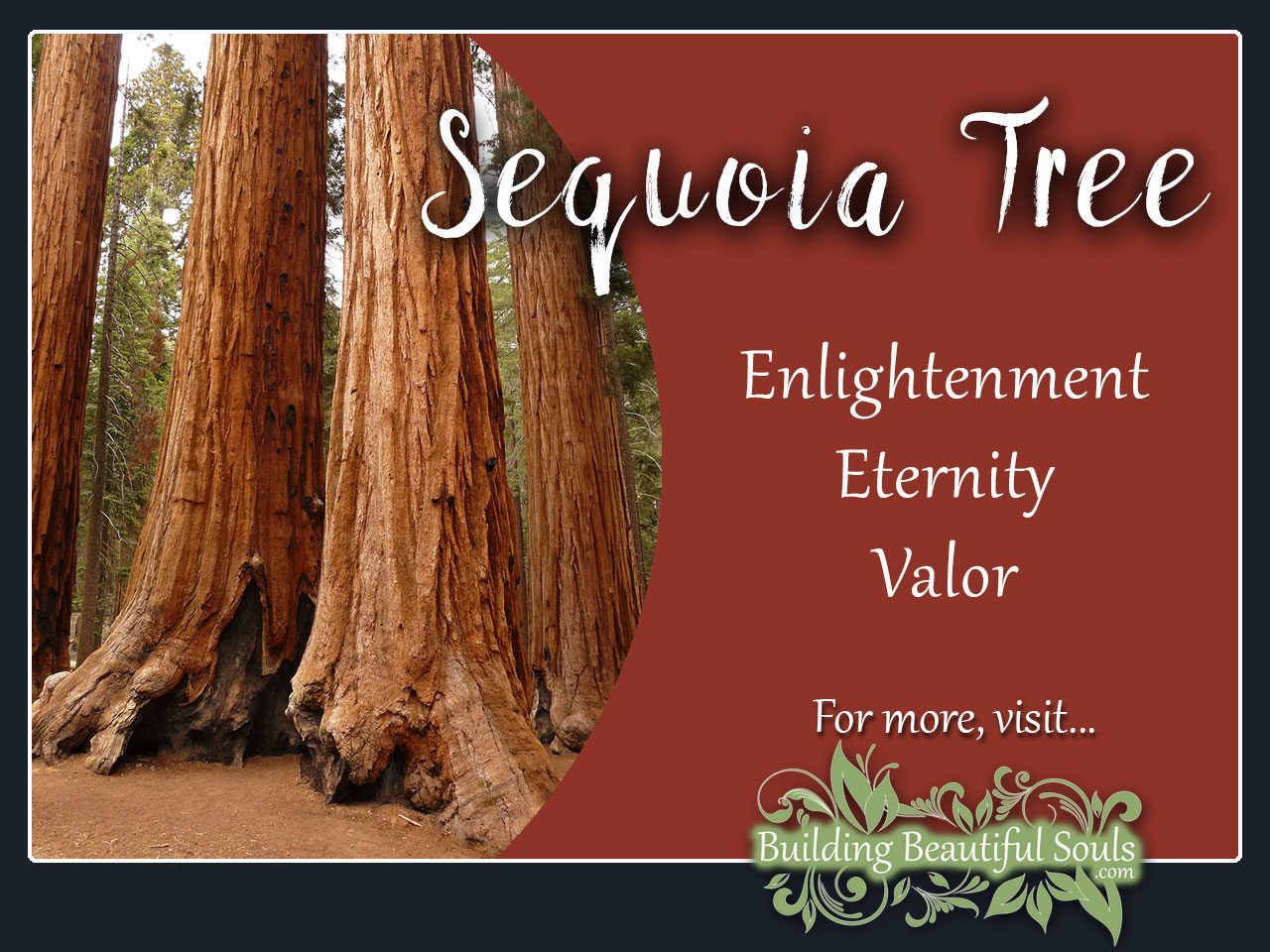 These giants of the forest grow to heights of 300 feet or more above the forest floor. They are among the Elder spirits of the earth plane, who grow together in a community. Many Light Workers and sensitives who walk these groves feel the sacredness from the roots below to the towering evergreens overhead. These handsome trees personify the words of William Cullen Bryant who said, “the groves were God’s first temples.”

Sequoia symbolize wellness and safety in that they have a natural ability to withstand fires and many types of decay. This is part of the reason for the Sequoia’s longevity. Additionally this tree resists insects very effectively without human interference. In this respect, the Sequoia reminds us of our responsibility to our world, and also whispers to us to pay attention to what’s really important – growth – rather than small pesky matters.

In the mystical world some believe that the Sequoia originated in Lemuria and may have existed in Atlantis too. No matter what, with a tree that can live over 1,000 years it has seen a lot of human history. Meditating on the Sequoia can improve our perspective of the human spirit and help us avoid revisionist history, no matter how convenient. Essentially this forest spirit lifts us up into its branches so we can see clearly, not only the self but all of humankind.

The Sequoia’s colors give us further insight into its meaning. The red bark of this Tree Spirit speaks of energy, strength, health, power, renewal and determination. Red is not shy in its vibration, and like the Sequoia it’s hard to overlook the intense energy. Dark red in particular represents the Will, bravery and nature’s abundance. This is the perfect companion to the Sequoia’s green bows that symbolize growth, hope, compassion, transformation and rejuvenation. The Sequoia’s branches reach to the heavens as if in prayer.

Trees play a significant role in the language of dreams. The height of the Sequoia may give it the meaning of sanctuary, of slow but significant personal/spiritual growth, or potentially a “higher” perspective. Much here depends on the condition of the tree and other elements of the dreamscape. You can learn more about the specific meanings of trees in our Dream Dictionary.

Sequoia Tree In The Victorian Language of Flowers

According to the story, the genus name for the Sequoia originated with George Guess who invented the Cherokee alphabet. To most people he was known as Sequoya. The Species name comes from a Latin term that means “forever living”. The Sequoya is an evergreen not just seasonally but spiritually too!

The Sequoia is a member of the cypress family. Aromatherapists recommend the oil as an deodorizer, antiseptic, astringent and pain relievers. By mixing the oil into a cream it can be applied as a rub for improved circulation and as an acne treatment. As an aroma this aids in calming panic attacks and other stress-related disorders.

Old folk remedial recipes call for the inner bark of Sequoia for jaundice, and the sap at a stimulating tonic.

Metaphysically speaking Sequoia seems to stimulate psychic abilities, particularly those tied to past life awareness and other dimensions of reality. Sequoia energy stimulates that white-light vibration that tingles down into your soul.

The lesson of the Sequoia is rather simple: spirituality isn’t a “keep up” game. It doesn’t matter when you start, so long as you START. You have to grow at your own pace, stopping at crossroads to integrate what you learn. Enlightenment, for most souls, doesn’t happen in one lifetime. So grow with the Sequoia, slowly and steadily, until you touch the sky.

In magic Sequoia needles or cones create a powerful connection to spells and rituals focused on nature. Additionally, use it in workings for personal vision, creativity and fortitude. If you find a piece of redwood on the ground, it is a gift from the Tree Spirits and makes an excellent fire wand.

While this tree does not specifically appear in the Tarot, it’s towering, strong trunk gives it a vibrational connection to the suit of wands/staves. In this divination system the suit of Staves represent strength, determination and the seeds of creativity. It’s a primal suit, as old as the Sequoia with a much spiritual consciousness and deeply meaningful ties to the Mother.

In Numerology the grand Sequoia is a 6, which represents protectiveness and responsibility.

Fun Fact: Sequoia only produce about 200 seeds each that have a wing design. This allows them to fly on the winds during the hottest of weather. A Sequoia cone matures only after two years, and even then it may not release it seeds for upward of two decades. In this, we might give this Tree Spirit the mantra of “no hurries; no worries.”

The first reference to Sequoias appeared in the early 1800s when an explorer named J. K. Leonard stumbled on them. However this amazing tree didn’t really get a lot of notice until the mid-1800s when a hunter wandered into the North Grove of what is now Calaveras State Park. When he initially told his companions no one believed him until they saw with their own eyes the massive height of this forest ceiling.

The local tribes at that time called the tree Waawona, a word that sounds like the call of a Spotted Owl who lives in them as the forest’s guardian spirit. Sadly the lone owl needed more help than it could summon against logging. Thankfully John Muir, the founder of the Sierra Club, managed to get these graceful giants under National protection in the park system.

The Native Americans often called the Sequoia “Grandmother”, and a grouping off them as “Ancient Ones.” Considering the Sequoia stood side by side with dinosaurs the designation seems very apt. She is a reminder that any soul can stand firm in the face of on-going harsh changes and come out more beautiful than ever.

One story tells us of a young brazen warrior who loved boasting of his prowess. His tribe, however, found this very distasteful. Eventually a group decided to kill him. The young warrior, showing some wisdom, ran as far and fast as he could until he reached the sea. Knowing there was no hope, he humbled himself and prayed to the Goddess of Death that his passing would be pain free. The Goddess found the gesture pleasing so she spared his life by making him a redwood, the bark of which matched his ruddy hair. In this, the Sequoia teaches us the value of modesty.