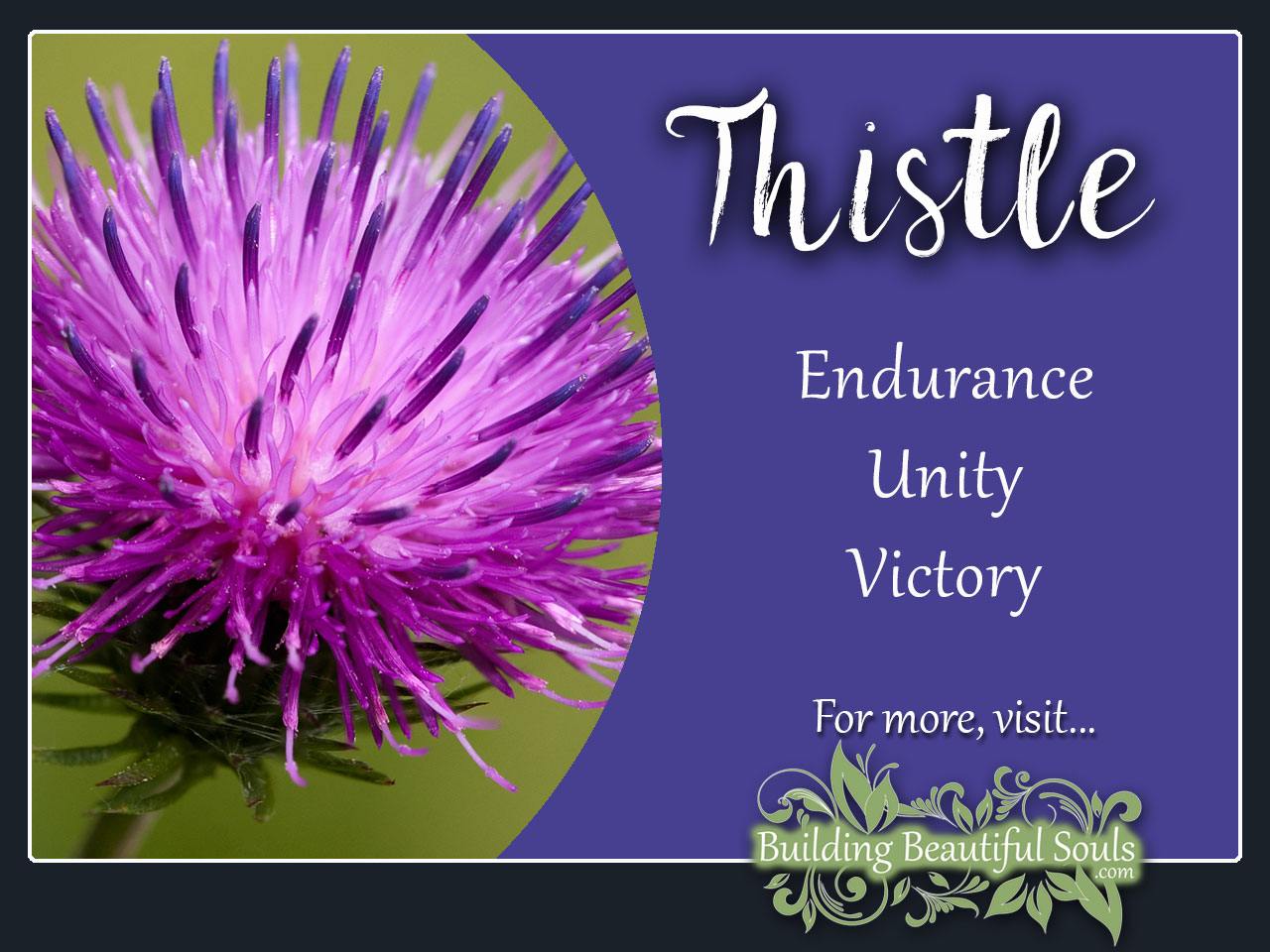 Thistle (Onopordum acanthium) is actually part of the sunflower family. It’s main claim to fame is being the national symbol for Scotland. However, there’s a lot more to the thistle spirit than representing a beautiful country.

There are actually over 200 types of thistles, but the Scottish thistle is the one most people think of when imagining this flower. Cotton thistles are the largest ones growing to 19 inches wide (talk about over-compensating!). Scottish thistles are smaller but nonetheless became the badge to the Stuart clan, a marker for Scottish currency and even appears where Mary Queen of Scots lies in her tomb.

Canadian thistle is a little different. It has become a bane due to incredibly aggressive roots that take over entire areas. The plant is very hardy. And while considered a bane to botanists the sturdy, forceful nature of this flower can add to the traditional symbolism of the Scottish thistle for overcoming even the most stalwart enemy.

While the top of a thistle plant is purple it is impossible to overlook their green leaves especially when staring across field banks throughout Scotland. Starting with that emerald hue, it symbolizes creating a balance between our head and heart. While we might want to get prickly like the thistle, it’s ok to be “pretty” too. Green naturally sends out peaceful energies. It offers the characteristics of good advice, listening skills and helpfulness to others. Perhaps this is why people in Scotland are known for their hospitality world-round.

Green is the color of sharing, trust, nature and stability. Combine this with purple’s transcendent, introspective nature and you have a lot of good vibes with which to work when communing with Thistle. Where green unites emotions and thoughts, purple unites the physical with spiritual. So while working inwardly the Thistle spirit also guides you outwardly and upward toward higher consciousness, psychic abilities and toward enlightenment. Green and purple together harmonize with humanitarians, leaders and visionary artists.

Dreaming of thistles usually speaks of some type of trouble or unpleasantness. If you’ve gotten into a situation, examine what you’ve done particularly your motivations. Make right any wrongs. A thistle sticking to you in your dream means that unbeknown to you someone looks at you with envy and jealousy. You can discover more Thistle symbolism in our dream dictionary.

Thistle In The Victorian Language of Flowers

The Victorian Language of Flowers identifies Thistle as the flower of intrusion (or perhaps more distinctly a warning against unwanted meddling.

As with metaphysics, milk thistle and blessed thistle are the two varieties most frequently used in folk medicine. Milk thistle was a long-used cure for depression and melancholy. Now it appears as an her used for liver disorders, although this application appears more frequently in Europe.

Thistle may be used for stomach disorders, as a cold tea and a general tonic for new mothers. Blessed thistle tea taken before bed reduces fevers. Externally the leaves from this plant may be used on the forehead for allaying headaches, itchy skin and nausea (just keep it away from your eyes.

Generally accepted healing qualities of the Thistle include acting as an emetic, stimulant, blood purifier and general tonic. To internalize these properties you can eat the leaves fresh or dried or create a juice / infusion.

Note that the oil collected from cotton thistle may be used for culinary purposes and wooly headed thistle can be consumed boiled or baked.

When a Thistle appears on a Tarot card rendering it often represents some sort of threat, usually one that you cannot see. It may also combine with a cards other symbolism to signify someone who clamors for attention in bad ways, being around brash, assertive people and retaliation toward an idea.

For divinatory meditation place thistle in a bowl with steaming hot water. Concentrate on your question. Seek out patterns in the steam or other portents for your answers. The power ceases when the water grows cold.

In magic, Blessed Thistle and Milk Thistle are the two plants that show up regularly. Wizards of old sometimes used Thistle stalks for walking sticks and wands for directing energy. Rituals and spells call for Thistle when one seeks safety, prosperity, endurance, health and improved energy. Poppets were stuffed with thistle and given to someone as a way of breaking the power of hexes.

Three is truly a magical number. It is body-mind-spirit, past-present-future, the three facets of the Divine, and generally a very upbeat, motivational digit. In the Thistle three manifests as greater skills with communication, the ability to motivate others and true seeing. Wear a thistle whenever the stage of your life seems overwhelming and you’d rather hide behind the curtain. Three and Thistle both say: Believe in the good you can do and keep your humor intact.

In Celtic symbolism the thistle represents nobility and graciousness. It became the emblem of Scotland in the 1200s, as well as the Chivalric Order of the Thistle in 1540.

The Thistle has a very thorny reputation. Some people even considered it a cursed flower. This association is understandable when you experience bristling thistles on bear feet. Scottish legends, however, paint a different picture.

The story goes that a Norse army endeavored to sneak into a Scottish encampment by night. At least one of them was barefoot. Upon stepping on a thistle he yelled out, alerting the troops. As a result the invaders retreated and left for their home land with their tail between their legs. Historians believe this was the story of the Battle of Largs, and a spear thistle was the hero of the day.