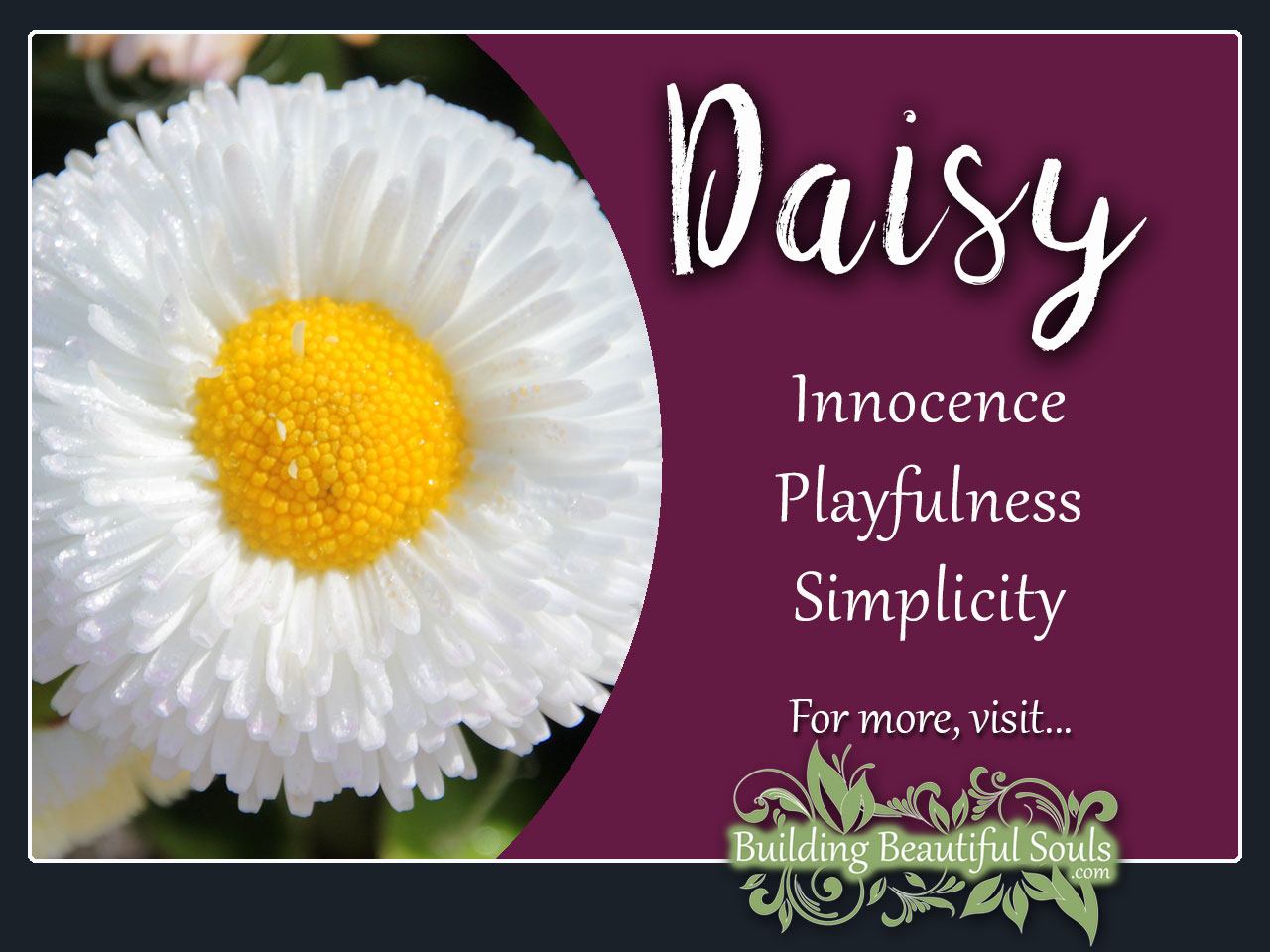 Broken into two words –day’s eye –it’s easy to see how this Flower Spirit got its name. The daisy really does open its petals as the sun rises, then closes as if to sleep at sunset. It got the additional folk designation of thunder flower because it blossoms bountifully with such storms. Since it stands unharmed afterward, it represents protection from lightning (this is why some people chose to grow them inside the house too).

It is impossible to look upon the face of a daisy and not think back to childhood adventures in fields dotted with flowers. Nearly universally the meaning of daisy ties to these thoughts – innocence and youth. They also represent modesty and the simple beauties in life that sometimes go overlooked and underappreciated. We can look to Shakespeare as support for this symbolic value where Ophelia picks up and looks at a daisy then returns it sadly, knowing that there was no virtue in that situation.

The daisy is a harbinger of spring’s arrival and as such many country folk felt it was a lucky flower only when it grows wild. Henry the VIII ate dandelion to calm his stomach after lush feasts. It was around this era when Daisy was part of the healer’s kit for jaundice and small pox.

In Celtic tradition a daisy grew for each spirit of a child who died in birth. It was customary to give parents a bundle of fresh daisies to improve their spirits and allay grief. Among Christians the daisy sometimes represented the Virgin Mary who gave the flower life with her tears.

Alternatively medieval artist sometimes used a daisy as an emblem of the Christ child. It is said that a group of daisies lead the Wise Man to the child’s manger. They likened the flower to their guiding star above.

The primary color for Daisy is white with a bright yellow center. This is a lovely combination symbolically. The yellow heart of the Daisy spirit fills with joy and solar energy. It stimulates creative thinking and supports honesty and loyalty. Around this upbeat core the Daisy’s white petals shine with the light of goodness, faith, virtue and clarity. Many artistic renderings show Angelic beings in white with golden haloes, which may give this flower some connection to the Etheric realms.

In the Dreamscape the daisy usually has something to do with a relationship, often the beginnings of one. A lot here depends on the setting. For example, being surrounded by daisies indicate helpful influences in your relationship. You can learn more about flower symbolism in our Dream Dictionary.

Daisy In The Victorian Language of Flowers

In the Victorian Language of Flowers daisy represented simple love (no complexities akin to the pureness of a first infatuation). The red daisy symbolized beauty that the person receiving the flower may not recognize. Generally a daisy as part of a bouquet speaks of the recipient’s virtue or acts as an acknowledgement of a request.

Since the daisy has no aroma, it’s found predominantly in folk medicine. The main constituent is the flower heads sometimes along with leaves. These were steeped for treating colds. Since they’re fully edible, there was no harm to this practice. Some healers also recommended the tea for kidney problems and arthritis pains.

Overall daisy tea improves the metabolic and digestive system and encourages a hardy appetite. Note that it does have diuretic effects so do not drink too close to bed time.

One of the oldest and most recognizable forms of floromancy is a very simple binary divination method. When a young girl would wish to know if her attentions were welcome, she would pick one petal from a daisy saying, “he loves me” followed by the next petal and, “he loves me not.” The last petal portended the future of that relationship. If the lass wanted to go one step further she could close her eyes and grab a handful of daisies. The number of blossoms represented the number of years until her marriage.

Note that this particular form of divination can work for any yes or no question, particularly those tied to the Daisy’s metaphysical properties.

For such a simple Being the Daisy has quite the numerological punch. 22 represents the most ancient of wisdoms and knowledge from the Akashic records themselves. 22 characterizes the Earth, our Divine nature, the Universe in all its possibilities, idealism and vision on a truly elevated scale. Look at the Daisy and how the flower spirals out like a galaxy. It radiates the vibration of 22 with every petal.

The scientific designation for daisy appeared in the late 1700s, Leucanthemum vulgare var pinnafidium. That fancy term boils down to a basic white flower with feathery leaves. At this point it was known mostly as a grazing food for horses, goats and sheep. Nonetheless we know from various archaeological digs that the Daisy has been around for far longer, potentially as much as 4,000 years. Minoan palaces had daisy hairpins and game boards featuring daisy motifs. Artists in the Middle East used the flower regularly as a decorative addition to ceramics.

Oddly in some areas the daisy wasn’t overly welcome because it’s very hardy and may overrun crops. In Scotland they actually had a group of riders hired to clear daisies from fields. The one who cleared the most got paid a ram.

Christians associate the daisy with both St. John and Mary. As a result many Mary Gardens of the Middle Ages featured daisies proudly.

Medieval knights were known to wear daisy chain adornments into battle as a show of love from their Lady.

A Roman story tells of a nymph who the God of orchards, Verumnus, fancied. She was dancing in the forest but didn’t want to take away from other nymph’s dancing. To take attention away from herself she turned herself into a daisy.