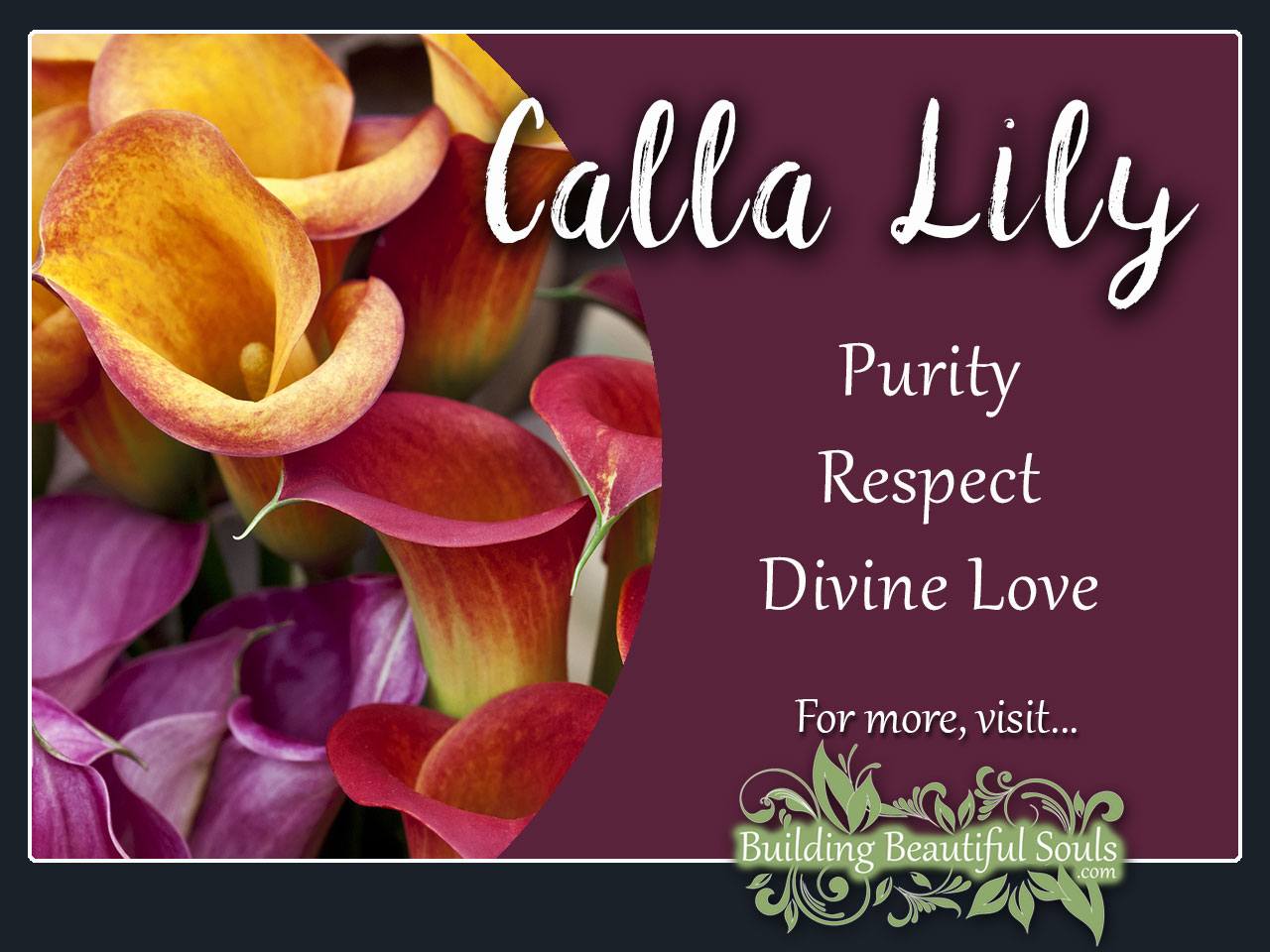 Calla Lilies grow from rhizomes that reproduce of their own accord, making them a symbol of fertility and plenty. The plant is hearty, living in nearly any environment that provides a fair amount of humidity, adding the additional meaning of hardiness and flexibility. Once harvested the Calla Lily has great staying power (an emblem of endurance).

The Romans considered Calla Lilly as a powerful phallic symbol because of the pistils. So initially this beautiful lady had some serious male overtones in the classic world. Nonetheless, the shape of the petal gives them a natural connection to the Sacred Feminine too (and perhaps by extension the Sacred Marriage). That is the reason that Christianity associates Calla Lilly with the Virgin Mary, and attributes this Flower Spirit with the characteristics of purity and virtue. This association contributed heavily to the use of Calla Lilies in wedding bouquets and decorations.

Calla Lily meaning has been related to Greek goddess Hera. The word calla means beautiful. The legend goes like this. Zeus, the roman god had fathered Hercules with earthly women. When Hercules was born, Zeus wanted Hercules to have divine powers. He drugged Hera and let the little Hercules nurse from her. As Hera came back to her senses, she was furious and pushed the baby aside. During this act, the milk way was formed and as the few drops of milk fell on the earth they became lilies. Seeing the beautiful lilies, Venus felt that her beauty is being.

In a strange dichotomy the calla lily also represents an untimely death, particularly of a young person. When they appear in a funerary arrangement their message is one of hope – for rebirth into a new and better reality.

While the most common color for Calla Lilies is white, some have orange, pink, wine, yellow and even deep purple hues, the latter of which is one often used at grave sites. In considering how to personalize the meaning of the Calla Lily, the color should be taken into account. Pink has friendly connotations, yellow is energetic, burgundy represents vitality and white is purity and unity.

As with other settings dreaming of Calla Lilies can mean peace, joy and purity. It may also, however, ported some type of death or ending. Beyond this the Lily may be a message from the Goddess. Use our dream dictionary for more specifics about flowers in dreams.

Calla Lily In The Victorian Language of Flowers

In the Victorian Language of Flowers the Calla Lilly represents Magnificent beauty (feminine in nature). An alternative meaning is union and rebirth.

In an odd twist, the Calla Lily is neither of the genus Calla nor a true lily! And while most people continue to call this flower a Calla, it isn’t closely related enough to be part of that genus. Professionally this blossom is now categorized with the zantedschia genus. Even so it remains with its common designation (a bit of a ruse) and could bear the symbolic value of trickery.

The theme of deep love continues into the depiction of the Calla Lilly in the Flower Power Cards. Here, Tantric lovers embrace in a way that combined two bodies into one mind and soul. Here the world falls away to the beating of hearts and spirits joined in joy. The Yin of the outer flower with the Yang of the inner stamen provides a simple symbol of our sexuality as a sacred thing – not sinful or dirty but as white and pure as the Lily itself.

The scent of Calla Lilies inspires positive self-images and healthy sexuality. The plant itself can be poisonous so any medicine made from it is applied topically, specifically for treating wounds.

In Numerology the Calla Lilly is governed by the number 6, representing a nurturing presence, in this case that of the Mother Goddess. 6 also vibrates on the level of true spiritual love, service, healing and kindness. In this, the Calla Lilly reminds us that working from a place of humility and selflessness is very powerful in its own right.

Calla Lilies originate in South Africa in an area that has no winter, allowing the flower to bloom throughout the year. In Roman times this Flower Spirit appeared at celebratory gatherings as if to
witness and join the happiness. At a wedding it represented purity. It was a common decoration at Winter Solstice, planted near the home as a way to welcome Light into the home. If a person had a garden of Calla Lilies, they were someone of means so a bundle of these flowers can also represent prosperity.

It also appeared in funerals, giving mourners a message of hope – what remains is but a shadow of the beauty in the next reality.

If I could carry calla lilies on my shoulder once more / like an umbrella in daylight, I would lean them / on the cemetery gate and sleep… – Thomas Heise, Epitaph X

Calla Lily thrives in marshlands giving it strong ties with the Water element. This helps explain the intense emotions associated with this flower – from birth to death, and the sacred marriage, water carries our hopes and dreams as well as our sorrows.

In the 19th century artists began using Calla Lily in artistic interpretations, including those by Georgia O’Keefe who bore the nick name “lady of the lilies.”

Greek mythology ties the Calla Lilly to Hera. As the story goes, Zeus slept with a mortal woman who then bore Hercules. In order to ensure Hercules would have Divine abilities, Zeus drugged Hera so Hercules could suckle without her knowing. When she woke and discovered the betrayal she pushed the baby aside. The milk that dripped from her breast fell to the ground and turned into Lillies.